Ahead of his first exhibition with Lisson Gallery, entitled Conditional Bloom, Van Hanos opened up his studio in the remote rural town of Marfa, Texas to allow a glimpse into the thoughts and processes the paintings go through on their way to completion. Created over the past few months of looking inward, and without the ability to gather imagery beyond his studio in the same way, Hanos initiated each painting not from a photograph or visual reference, but instead began each work with the material of a thought or emotion. Watch the video or see interior shots and quotes from the studio visit. 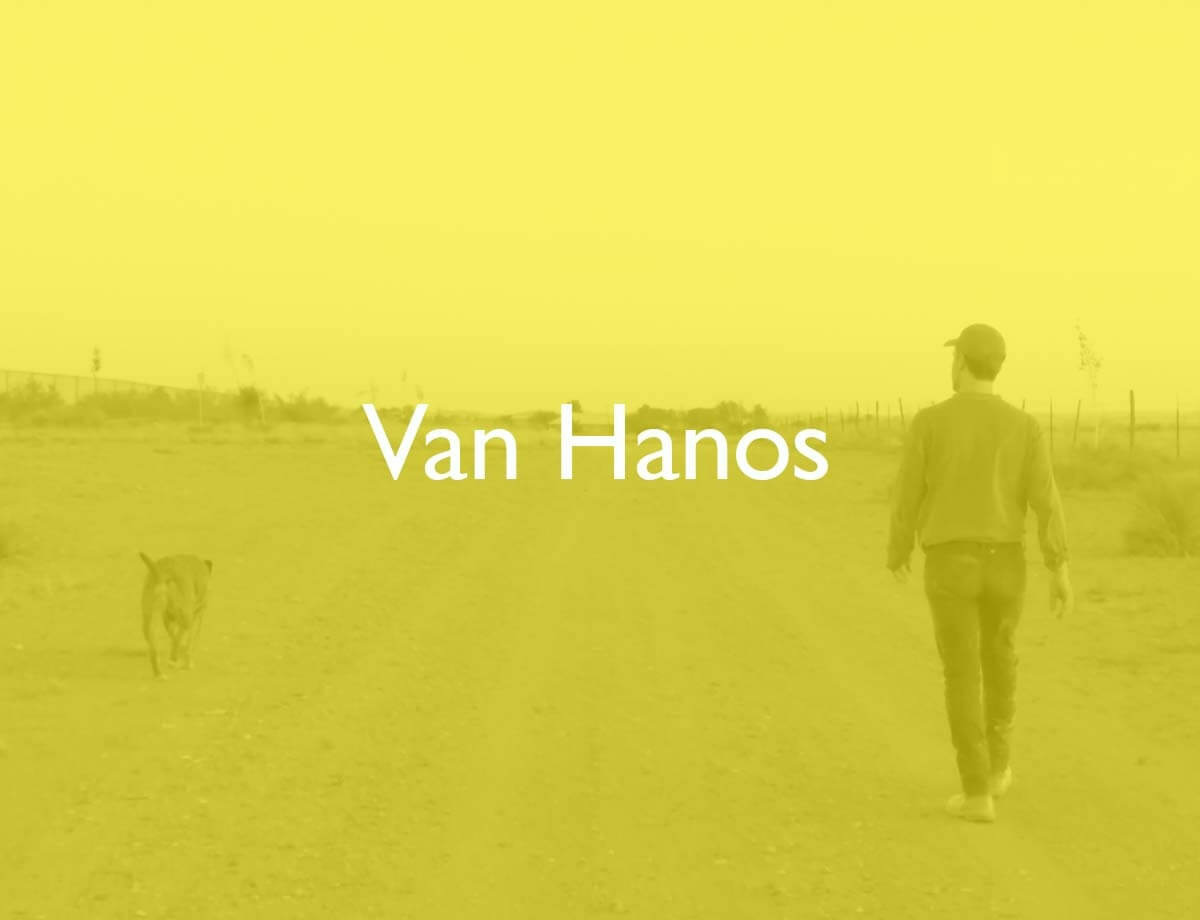 As a tribute to Peter Joseph (1929-2020), the artist to have held the longest continuous association with Lisson Gallery, we are publishing a never-before-seen extract of an interview conducted at the artist’s home and studio in Stroud, Gloucestershire, in 2011, with Hans Ulrich Obrist. This comes ahead of his second exhibition at Lisson Gallery, New York, entitled 'Border Paintings', which he had been working on at the time of his death, aged 91.

The focus of this excerpt is an aesthetic epiphany that came to Joseph during a visit to the cinema in 1971, at which the film projector broke down and the artist found himself staring at the blank screen for close to an hour. This experience, of a shimmering off-white central space and a darker surround, would characterise his so-called Border paintings, executed over the next three decades, with two differing hues competing for our attention and with each other. 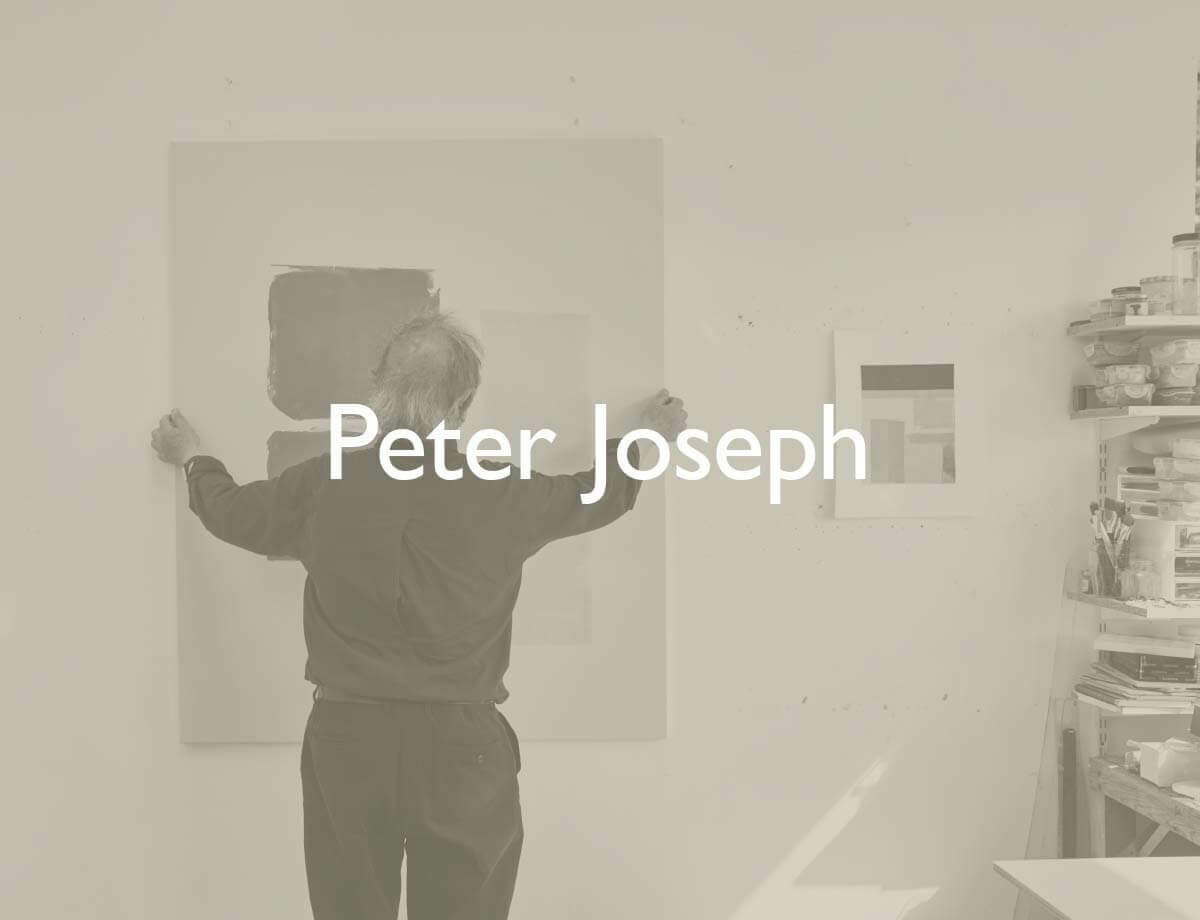 In an attempt to rediscover the basics of human connection in these isolated times, Laure Prouvost has developed a new ideographic language, to promote the un-learning of language, the re-learning of words and the de-learning of previously associated meanings. The roots of this new crypto-classification system, or Legsicon, are to be found growing throughout Prouvost's career, but specifically relate to her latest exhibition at Lisson Gallery London, where she has installed an entire Re-learning Center (6 October – 7 November 2020), offering willing visitors the opportunity to newly acquire this language of her own devising.

Challenging the conventional systems of linguistics and representation, Prouvost replaces emotive word and concepts with anthropomorphized objects, here represented by her watercolour drawings, which are then transcribed and translated into progressively complex lexical and linguistic tests and eventually entire narratives that require the audience to de-code and re-interpret them, in order to progress. Finally, a series of new stories and texts using this object alphabet, commissioned from various authors by the artist, will feature here every week, in advance of a forthcoming publication. 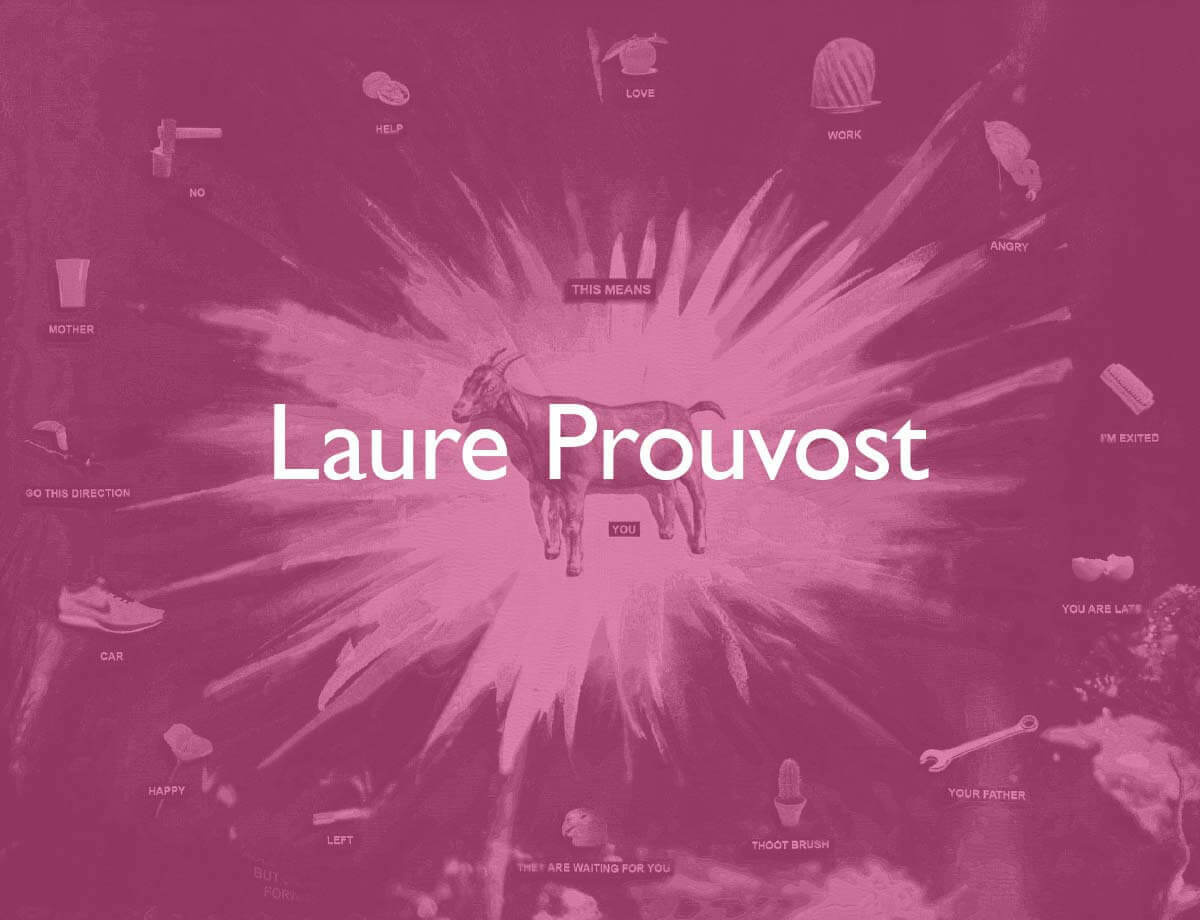 The scene depicted in Liu Xiaodong’s June 2020, New York (2020) was painted in a makeshift studio in a small apartment in the West Village (portrait above by Cai Wenyou) from photographs and studies made at the corner of Washington and Christopher Streets, just off of the usually bustling West Side Highway. In his daily routine of exploring this neighbourhood during the city’s lockdown, Liu came upon a Black Lives Matter protest held during what would have been the 2020 Pride Parade on the last Sunday in June. Shown at Lisson Gallery, East Hampton, 24 September – 4 October 2020. 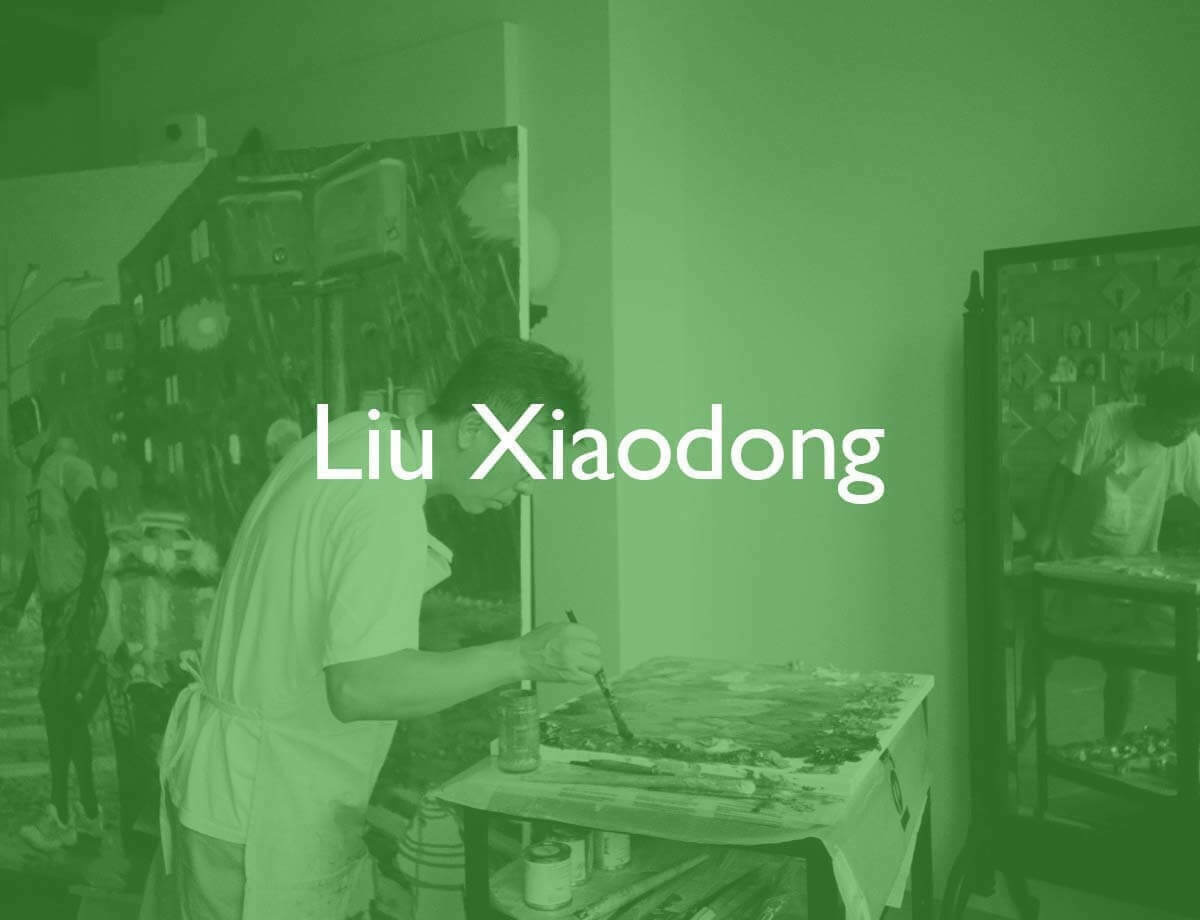 Haroon Mirza on the Emerging Paradigm

In October 2019, Southampton’s John Hansard Gallery presented ‘Haroon Mirza: Waves and Forms’ – a major solo exhibition by the British artist whose installations testing the interplay and friction between sound and light waves and electric current have won him international acclaim. Through immersive sensorial environments and anechoic chambers, video and performance, Mirza’s manipulated compositions purposely cross wires and leave their processes and materials exposed. Due to open at Aberdeen Art Gallery this March, the touring exhibition’s second instalment was first rescheduled and then cancelled due to forced closures during the coronavirus pandemic. With no physical show to document and no evidence that it would have taken place, Mirza began reworking components of the works included to create new iterations that would exist digitally.

One of these was Dreamachine 1/0, which recently premiered online as Lisson Gallery's featured Spotlight artwork. This screen-based work developed as a purely digital 'translation' of Dreamachine 2.0 – an experiential installation in which Mirza and collaborator Siobhan Coen delve into the subconscious and seek out spiritual enlightenment through specific combinations of retinal, aural and physical stimuli. 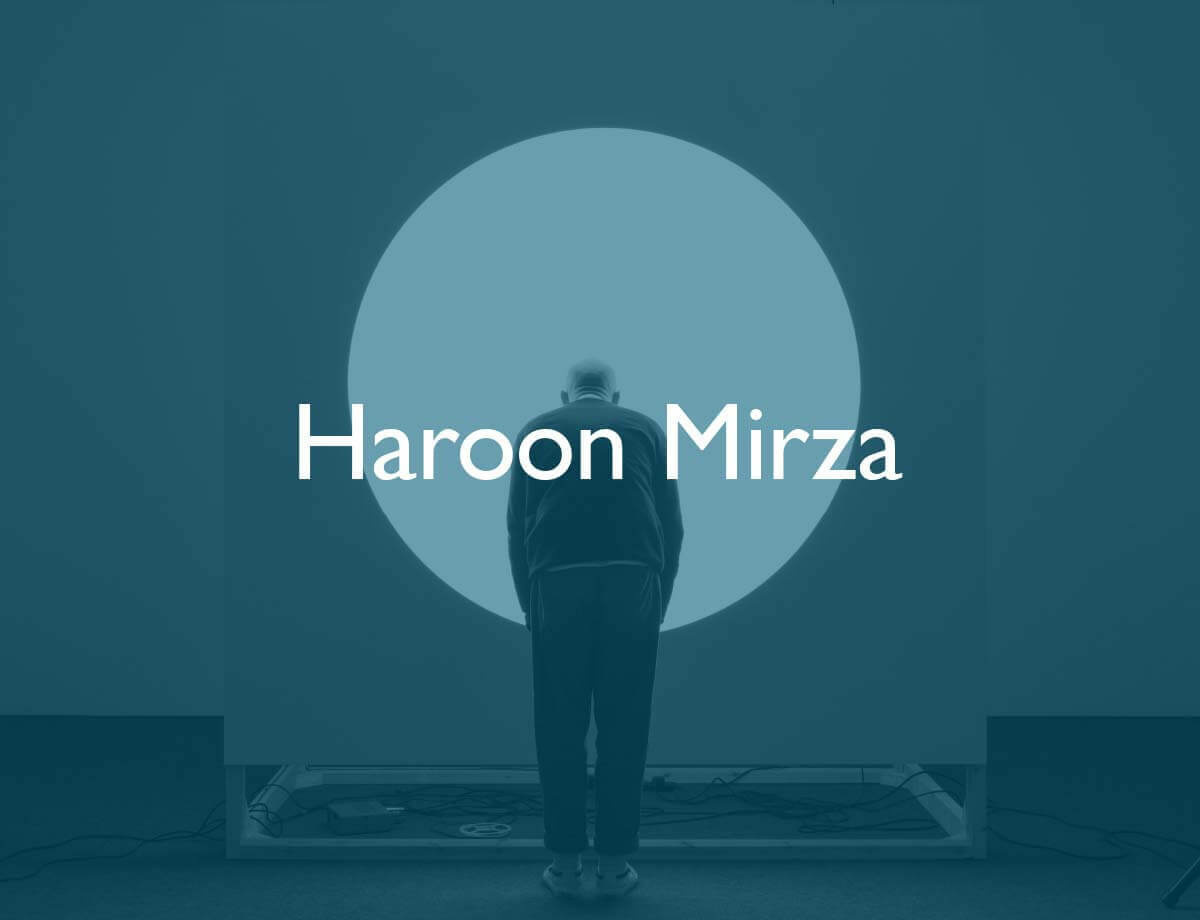 On 8 July 2020, Texan artist Hugh Hayden led a tour of his inaugural London show, American Food (12 March–31 July 2020), in conversation with curator and director of The Showroom, Elvira Dyangani Ose.

Making reference to themes of African identity and art history, communal and performative eating and the social values of cooking, Hayden also relates his exhibition to the ongoing epidemic and political upheavals occurring in the US and beyond. They discuss a new initiative aimed at fostering diversity in art education, the Solomon B. Hayden Fellowship – a partnership and student fund at Columbia University, named after his late father. A series of extracts, related films and images from previous 'culinary installations' can be found below, a full transcript was published recently by Ocula. There is also a downloadable exhibition guide published here for the first time with a new essay by Jessica Bell Brown, Associate Curator for Contemporary Art at the Baltimore Museum of Art and an interview with Chika Okeke-Agulu and recipe contributions from Mina Stone, Omar Tate and Paul Anthony Smith. 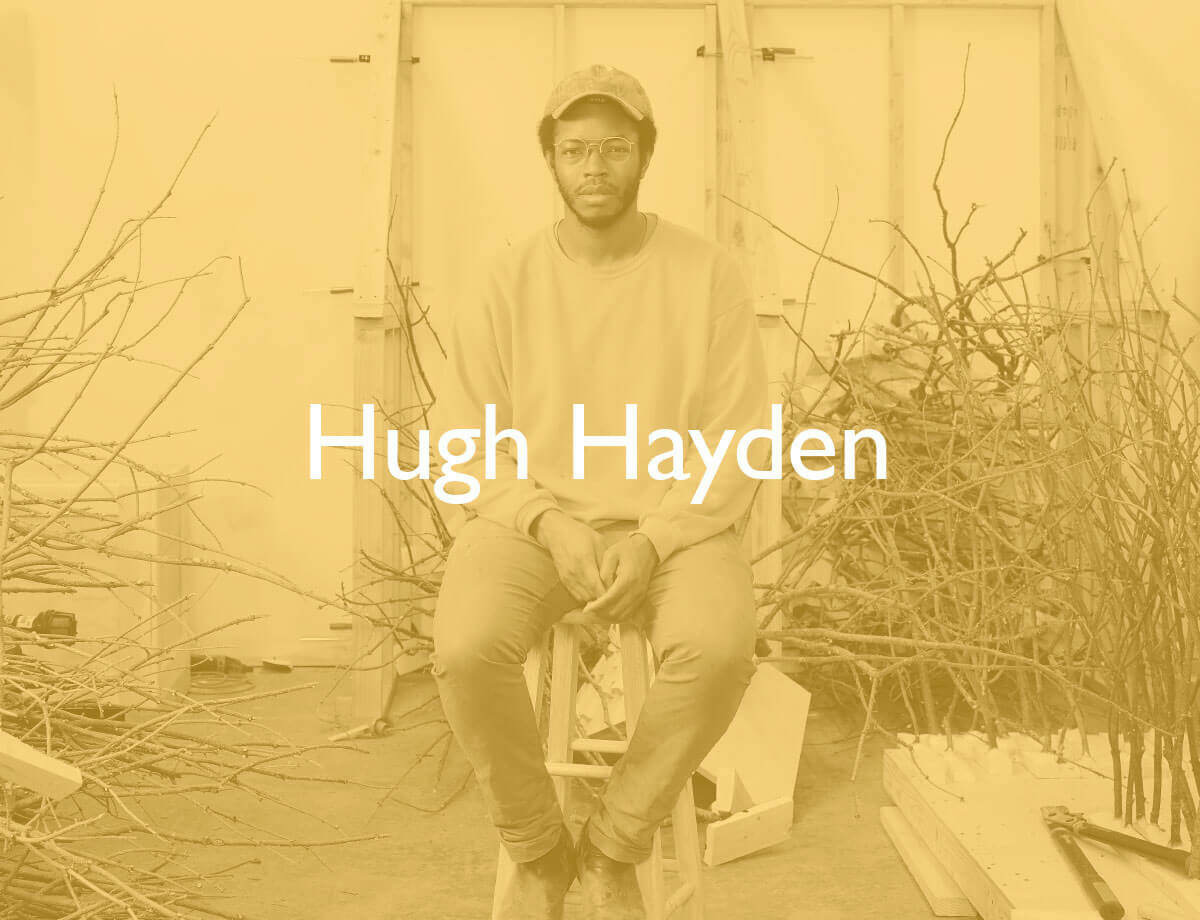 This discussion, recorded on Thursday 18 June 2020, examined the legacy of John Akomfrah's early films, such as Signs of Empire and Handsworth Songs, in the context of ongoing Black Lives Matter protests, the destruction of colonial monuments and the structures of institutional racism. The conversation was moderated by writer and broadcaster Ekow Eshun and features artist and filmmaker John Akomfrah; theorist and Professor of Humanities and Modern Culture and Media at Brown University, Tina Campt; and author, literary scholar and Professor at Columbia University, Saidiya Hartman. 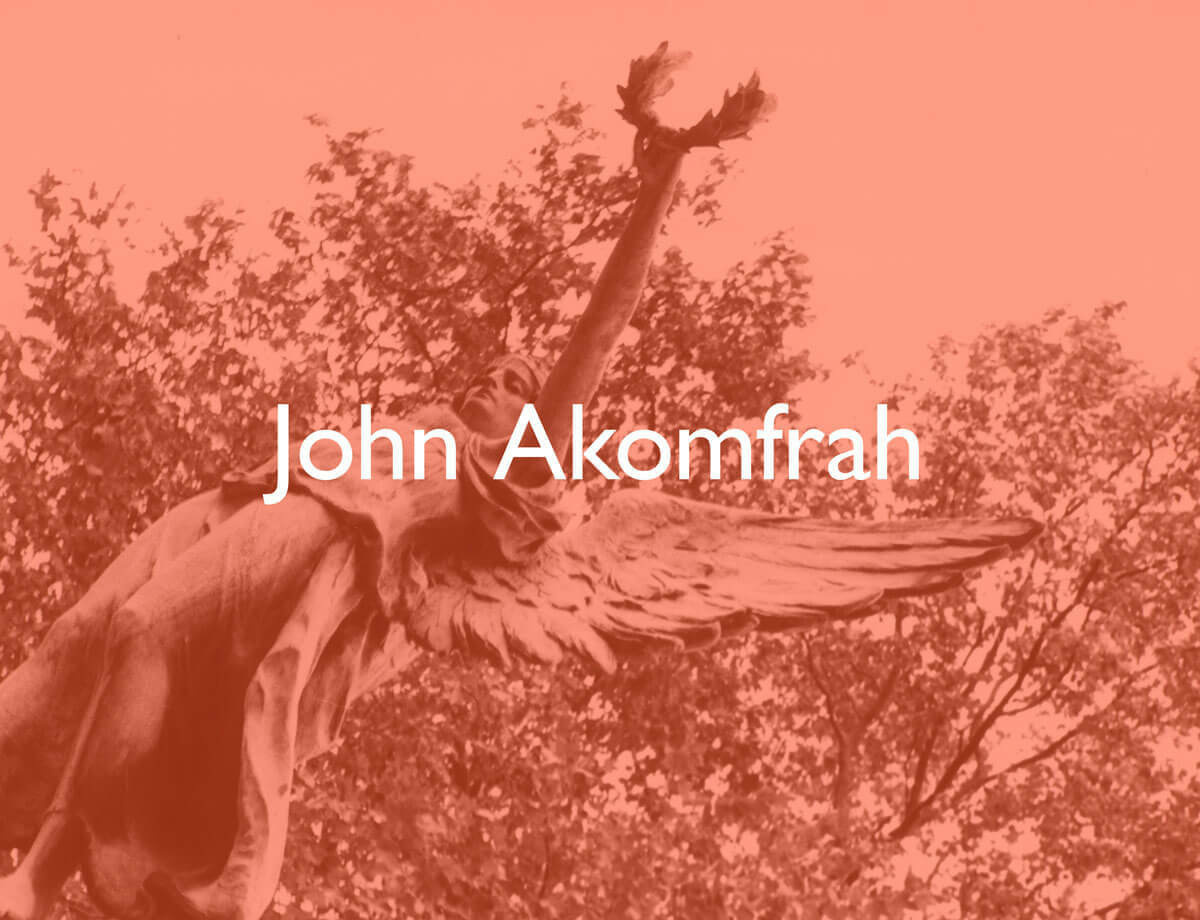 In a special interview conducted to coincide with a screening of the six and a half hour film work, Heaven and Earth (2014), Ai Weiwei discusses how he turned a traumatic public event into an ironic, painstakingly honest and haunting portrayal of injustice, through the medium of operatic song. In conversation with Lisson Gallery’s Curatorial Director, Greg Hilty, Ai delves into his use of performative scenarios – whether court cases or operas – for this and subsequent works, relating his use of performance, film and music to the better known documentary and activist sides of his practice.

Accompanying these videos is a never-before-seen selection of images from the sadly stalled production of Turandot in Rome, now postponed until March 2021, in which Ai hopes to draw on the mythology of China, the political and social realities of today, as well as his own biography and iconography. 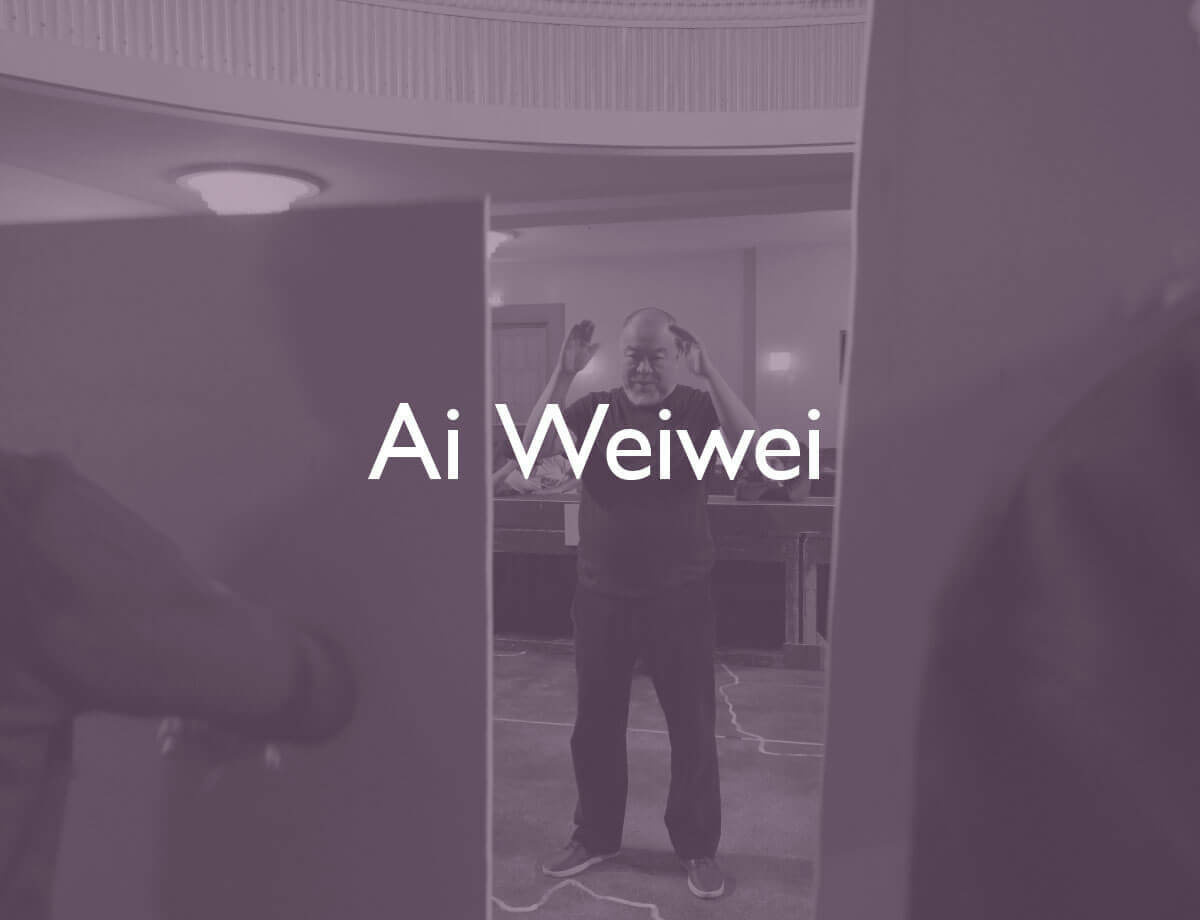 To celebrate the 105th birthday of Carmen Herrera on 30 May 2020, Lisson Gallery launches a new in-depth series, entitled Studio, on our artists' spaces, practices and preoccupations. This includes conversations, behind-the-scenes footage and access to thought processes and new bodies of work. As well as screening the documentary, The 100 Year Show, made in the lead up to her centenary in 2015, this celebration of Herrera's life and work focuses on never-before-seen images and videos of her studio and apartment in New York.

From architecture studies in Cuba to New York’s Art Students League to Le Salon des Réalités Nouvelles in Paris, Herrera's life has spanned continents and art movements, and demonstrates a persistent devotion to her work. She was a pioneer and a peer of many male artists who received great recognition in their time. Her story is just one example of the many great artists whose accomplishments were overlooked because of their gender, ethnicity or nationality. 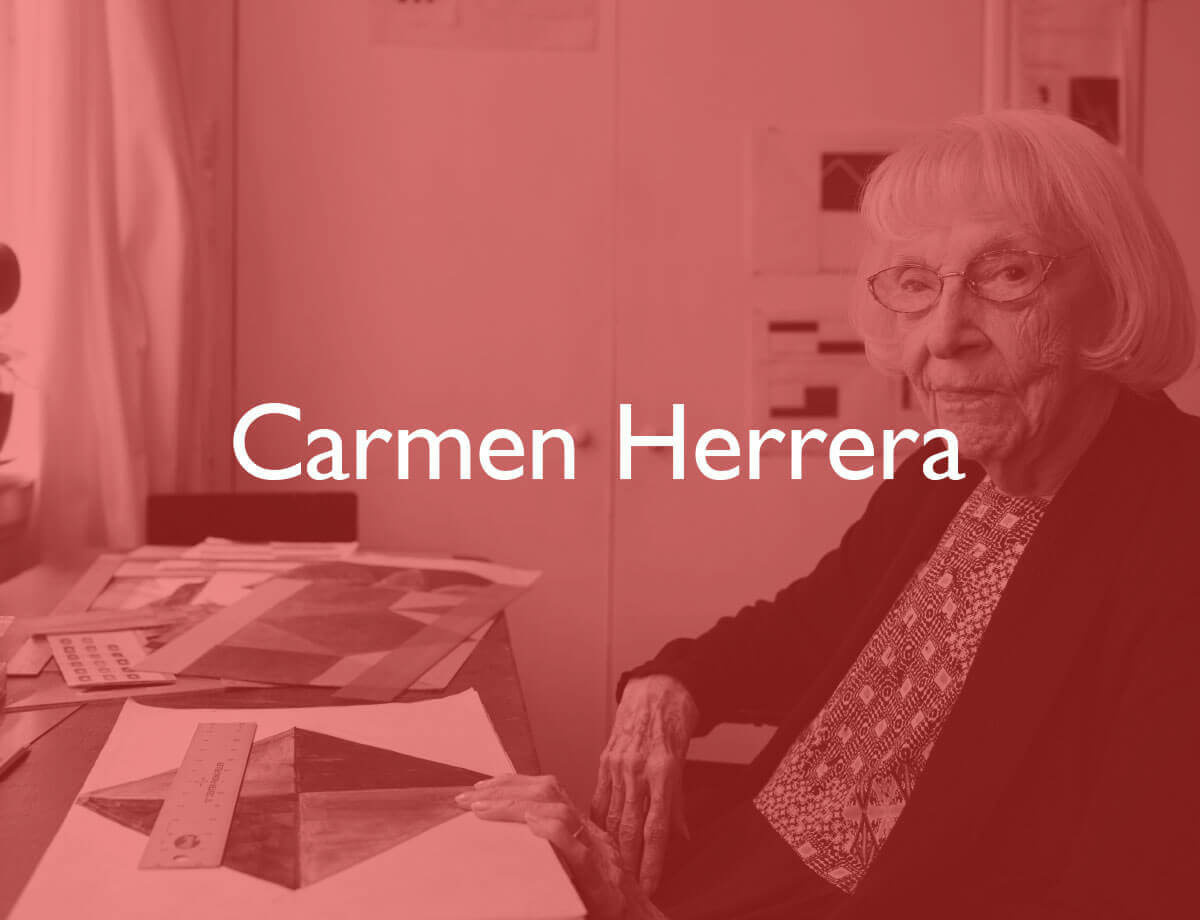 Rodney Graham invites you to his Vancouver studio where he discusses a new body of work for Lisson Gallery, the so-called Painting Problems, collaged and derived from previous series and painterly personas created by the artist. In these works, Graham continues to inhabit the figure of an unnamed abstract painter, drawing on the vocabulary of early Modernism, splicing together different styles from the Cubism of Braque and Picasso, to the Constructivism and Expressionism of Rodchenko, Pollock and Fontana.

Previous and recent painting series by Graham are obliquely referenced in these Painting Problems – the first of Lisson Gallery's Online Exhibitions (6 – 20 May, 2020) – yet by sampling aspects and fragments of his own compositions, Graham has created a new combinatory style. Here he reveals the thinking and complexities behind the perfect painterly surfaces. 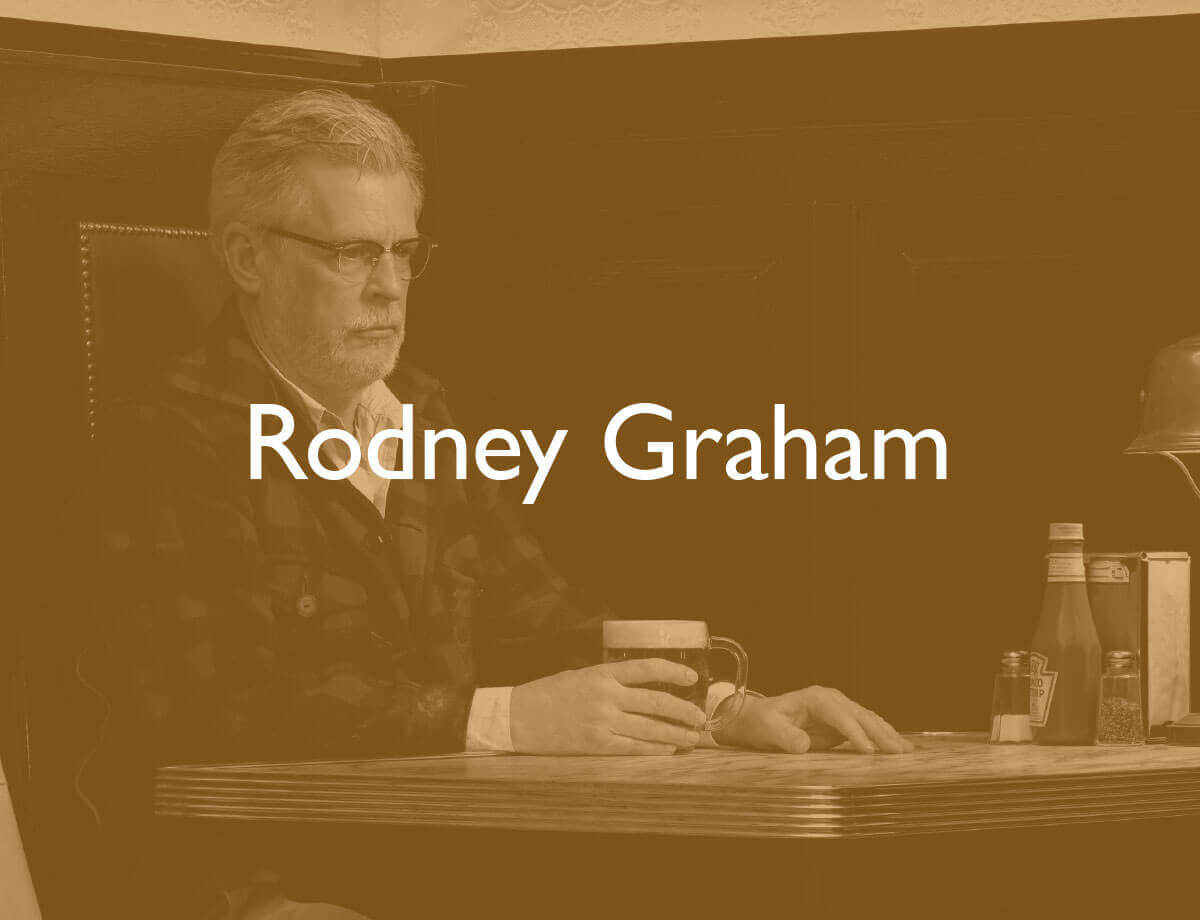 On 4 and 5 May 2020, Lisson Gallery held virtual tours around the Berlin apartment and studio of Christian Jankowski. Led by the artist and Lisson's Ossian Ward, the walkthroughs introduced Jankowski's 2011 film work Casting Jesus (screened by Lisson for one week as the final film in its first season of Spotlight Screenings), in which the artist invited a panel from the Vatican to audition actors vying for the ultimate role: playing the Son of God. Jankowski discusses this film in the studio tour – and how the potentially heretic artistic act was also one of collaboration and deference to the expertise of his ‘co-authors’ – along with a selection of other seminal films from his 30-year career that exemplify the often cooperative, performative nature of his work. 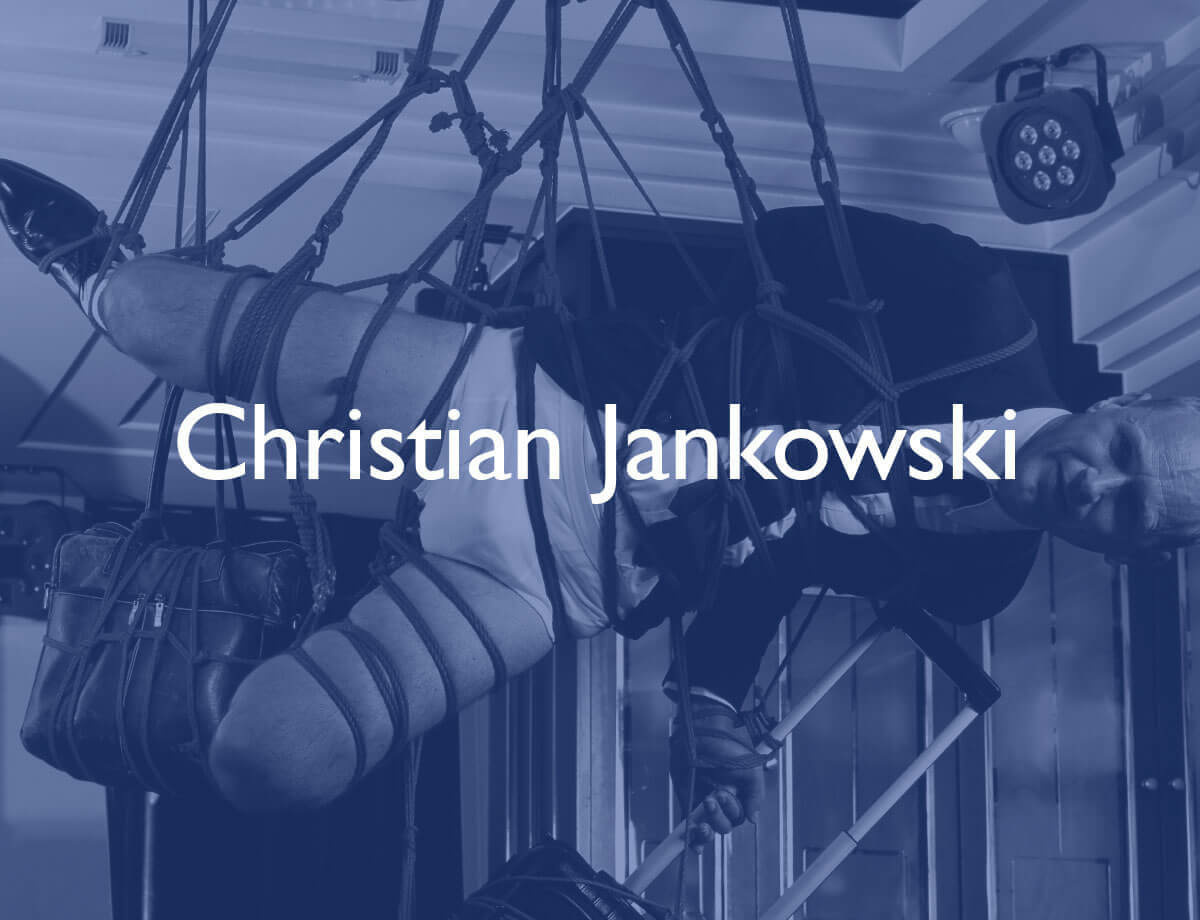 On Tuesday 7 April 2020, Ossian Ward of the Lisson Gallery hosted a live virtual walk-through of Ryan Gander's studio, where the artist provided insight into the new works in his studio – including a philosophical animatronic mouse, ghostly apparitions, fake snow drifts, a man crafted from graphite and other friends. The live tour was conducted via video-conferencing on two separate occasions with hundreds of invitees. Images and documentation of works included in this tour follow the full video of the studio visit.

Gander's work The End (2020) will inaugurate the 'Focus' presentation for Lisson Gallery's Online Exhibitions from 25 – 31 May. 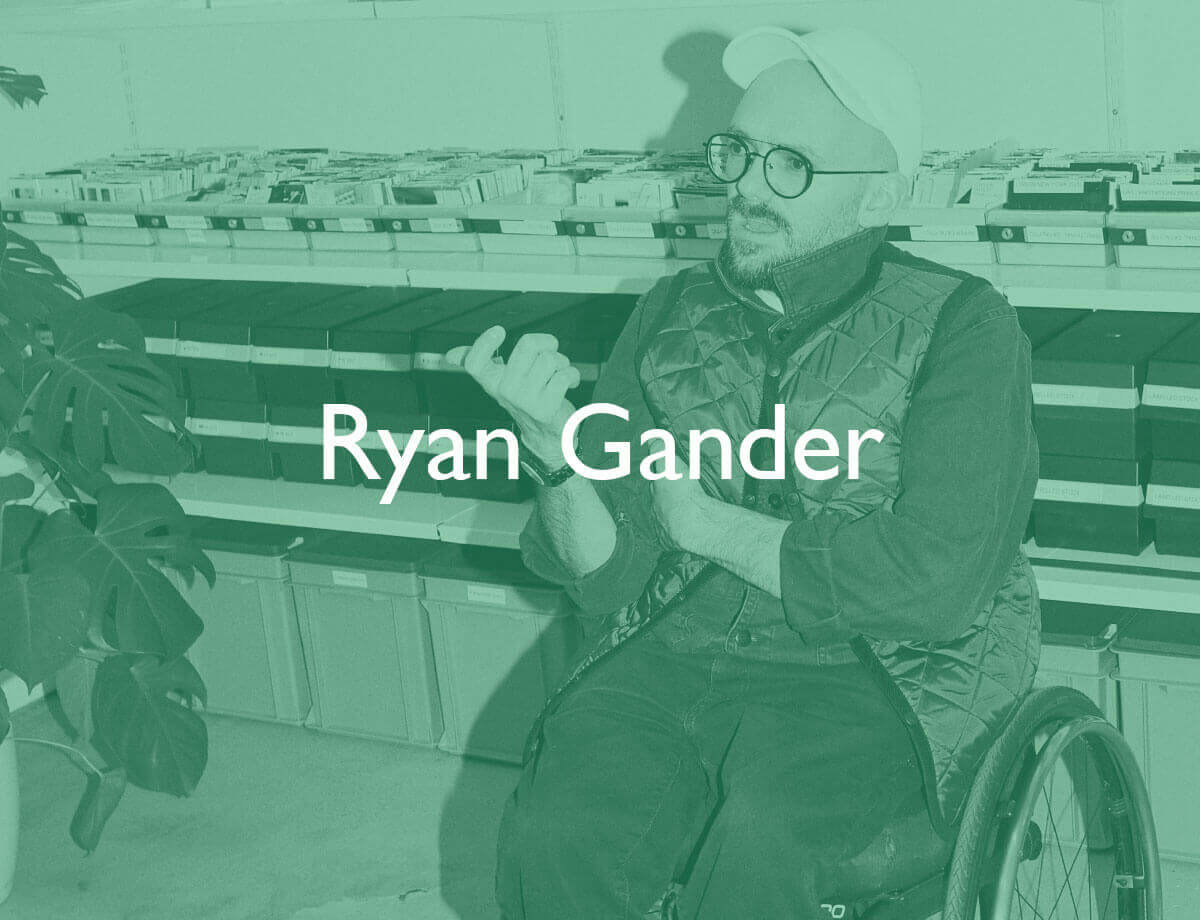