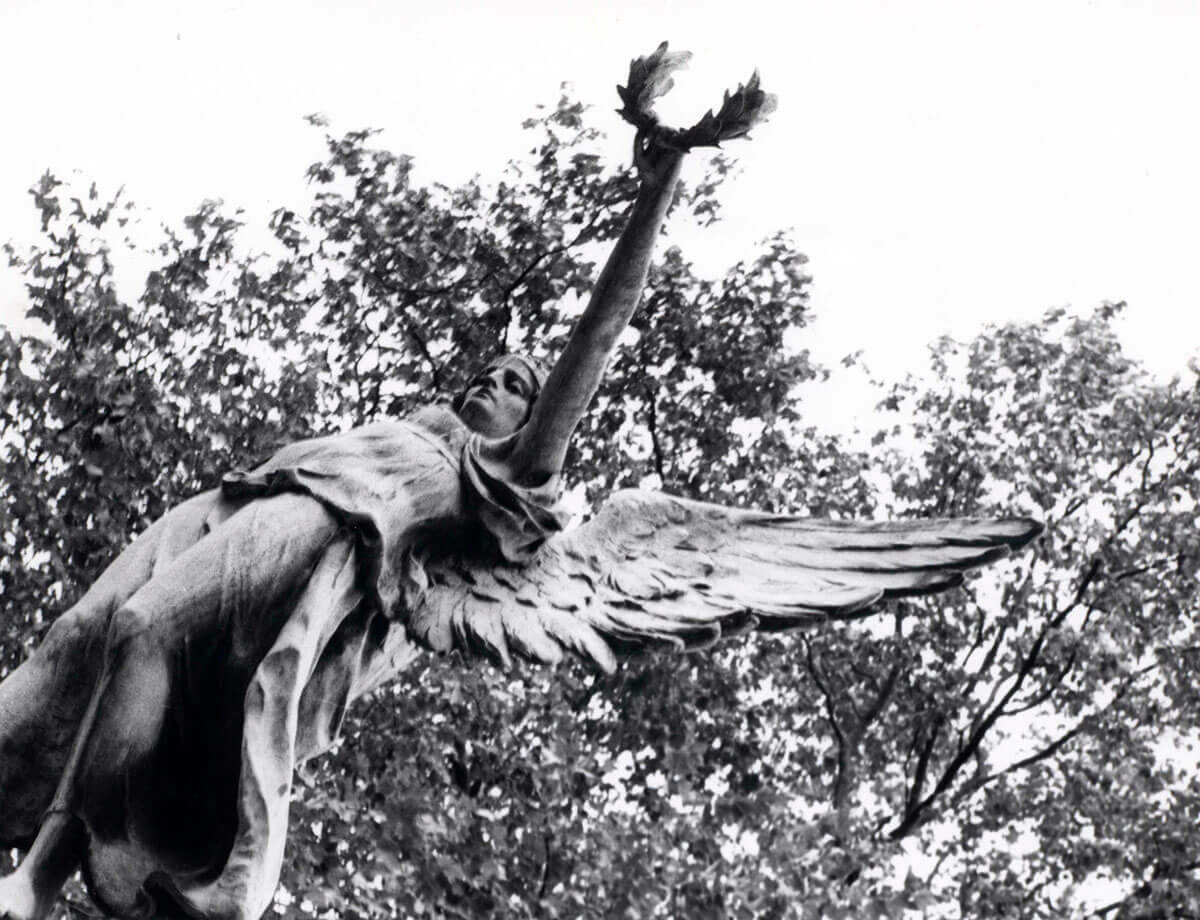 This discussion, recorded on Thursday 18 June 2020, examined the legacy of John Akomfrah's early films, such as Signs of Empire and Handsworth Songs, in the context of ongoing Black Lives Matter protests, the destruction of colonial monuments and the structures of institutional racism. The conversation was moderated by writer and broadcaster Ekow Eshun and features artist and filmmaker John Akomfrah; theorist and Professor of Humanities and Modern Culture and Media at Brown University, Tina Campt; and author, literary scholar and Professor at Columbia University, Saidiya Hartman.

On monuments and the structures of racism

Tina Campt: "On the one hand, there's the question of what kind of history is being claimed in these particular kinds of monuments. But on the other hand, there is also the impetus to destroy, right? And, one of the things that I was so struck by, in revisiting Handsworth Songs in relationship to Signs of Empire, were the kind of echoes that we hear, there was a moment at which I watched the whole thing and then I rewatched it without watching and I just listened to it – I listened to the entire thing. And to actually hear the echoes between police violence, harassment – just literally the terms that kept coming up – harassment, you know, when people have had enough, listening to the story of Cynthia Jarrett in Broadwater Farm estate and the echoes with Breonna Taylor.

So thinking about what is the power of destruction; to make a link between who you are and who you have lost and how that cannot be tolerated anymore and to rethink history in its monumentalization. For me, I mean, the opportunity of revisiting Handsworth right now is to actually subject ourselves to echoes and to allow that to resonate transnationally, transatlantically, and to think about the cycles that we are trying to disrupt in the language of abolition. The language of abolition is not about us doing this again, it's not about it being allowed to manifest again, or to concretise again, it is really about a fundamental restructuring of the way in which we are related to one another and the power, the structure of policing. So I want to think about those echoes. And I also want to think about what's different – the demands are structurally different. They are not about equality, right? They're not even recognising the possibility of equity. They're actually talking about the structure that has to now change."

John Akomfrah: "For me, works – almost in a very mystical way – contaminate the spaces in which they're born, you know, and feed the unspoken assembly, directions and insight about how they might work with things. And so, it's not surprising to me that more than a decade after Saidiya's Scenes of Subjection – which for the first time, placed, for most of us, this question of the performative at the heart of subjectivization – that people would want to stage this, it's not entirely surprising at all. And I think the everything that Saidiya's work was about in that book is exactly what happened.

So for instance, it was really strange, looking at Edward Colston's statue rolling down the street, suddenly he was just a tin can. Because the work was being done while he was upright in place, in situ. The minute he's dethroned, dislodged, he just becomes an object – suddenly the whole symbolic order disappeared. So I'm surprised, but not entirely surprised, that this dismantling, disrobing, dethroning of those statues would be a feature of the present and not of the 1980s. We just didn't have those kinds of instincts, to put it bluntly. We were grappling with it, we were sort of heading towards it. But I don't think even in our most narco-syndicalist moments did we advocate bringing, you know, taking down statues..."

Saidiya Hartman: "I think just how pointed and clear the terms are and the assemblage of critique and demand. It is not only an end to state violence and eradication of anti blackness; wanting to destitute a state founded on racial slavery and settler colonialism; attacking heteropatriarchy, reimagining species life – all of those things are together in the assemblage... I think it's the pressure on all of those fronts simultaneously, which is so great. And just the clarity of the analysis in the sense that people won't be settling for a kind of symbolic politics... The radical mobilisation you see in the streets, they're offering us a kind of ethnic history that would accompany that monumental history. So in my state, and at my university, Juneteenth is now an official holiday...

We want to end this world as it is now and imagine and create something new and I'm so inspired by that. We won't be fooled or tricked by the old forms of liberal inclusion or by strips of Kente cloth, we will be persistent and understand the character of the structure and I think that that is what is so apparent."

On protest, breath and George Floyd

Tina Campt: "We are at a moment in time when the end of the world as we know it – as Denise Ferreira da Silva has talked about – is no longer far away or unimaginable. So, pressing for that, demanding that is imaginable. Because we're living also in the time of a pandemic when walking out of your house is the end of the world as you know it, right? When embracing a loved one... or mass unemployment is the end of the world as we know it. The impetus to have nothing to lose, to choose what your fate – to choose the fate of the form of death – is to go down swinging; as opposed to having no breath, or to have the breath be pressed out from you by COVID-19 or from a police officer whose foot is on your neck. We are at this kind of absolute tipping point where black folks are saying this is empowerment."

John Akomfrah: "I don't remember seeing an image [the video of George Floyd's killing] that harks back so graphically to Mantegna's Dead Christ. I don't recall seeing anything which felt so graphically like the scene of a crucifixion, so I'm not entirely surprised by its galvanising force, power and zeal. Somebody made me weep yesterday because they seemed to confirm this feeling that I had that there was some weird affinity between a 16th-century Italian painter and this man, you know, whose daughter was being carried through the street and she says, 'My daddy changed the whole world'. And she's right. Her dad's changed the whole world, in precisely the same narrative terms as one speaks – in biblical terms – about the crucifixion. I think the only difference of course, is that George Floyd probably would have passed on the invitation for martyrdom, given the choice – but it's not one that he got."

Saidiya Hartman: "It's really hard for me, literally seeing the life being dissipated from a black man as a white police officer is killing him, with a 17 year-old black girl witnessing it. We know it's traumatising for black people, there's even a medical study saying that watching something like that has a negative impact on a pregnant woman carrying life – it is so deeply, deeply traumatising.

One of the things that I was thinking about though, in terms of the sounds and visions of the movement, is all these lovely shorts that the movement for Black Lives has been making. And there's this great song where people are, you know, people are in the street, they're protesting, and they're dancing and they're singing. And it seems that that activation of sound and motion, which is about possibility, about feeding the imagination, which is about creating joy – even in that space of solemnity, even in the context of this brutal enclosure, because we're at this open moment. It's the interregnum, everyone is invoking Gramsci. So, where we go from here is the question? Are we making making these initial steps towards the dismantling of this order, or will the autocrat, neo-fascist forces be able to consolidate? We're in this open, open moment, but I think that we have witnessed enough black death for a lifetime and that that should not be what is needed to make people take the streets."

Tina Campt is Owen F. Walker Professor of Humanities and Modern Culture and Media at Brown University and a Research Associate at the Visual Identities in Art and Design Research Centre (VIAD) at the University of Johannesburg, South Africa. Campt is a black feminist theorist of visual culture and contemporary art. She is the author of three books: Other Germans: Black Germans and the Politics of Race, Gender and Memory in the Third Reich (2004), Image Matters: Archive, Photography and the African Diaspora in Europe (2012), and Listening to Images (2017). Her forthcoming book, A Black Gaze, will be published by MIT Press in 2021.

Ekow Eshun is a writer and curator. He is Chairman of the Fourth Plinth Commissioning Group and the former Director of the ICA, London. He is the author of Africa State of Mind: Contemporary Photography Reimagines a Continent (Thames & Hudson) and Black Gold of the Sun (Penguin), which was nominated for the Orwell prize. His recent exhibitions include 'Masculinities: Liberation Through Photography' (Barbican) for which he was an adjunct curator; Africa State of Mind (MOAD SF). He has contributed to catalogues on the work of Chris Ofili, Kehinde Wiley, Wangechi Mutu, John Akomfrah, Duro Olowu among others. Eshun’s writing has appeared in publications including the New York Times, Financial Times, Esquire, GQ Style, The Guardian, Aperture and L’uomo Vogue. He holds an honorary doctorate from London Metropolitan University.

Saidiya Hartman is the author of Scenes of Subjection: Terror, Slavery, and Self-Making in Nineteenth-Century America (Oxford, 1997); Lose Your Mother: A Journey Along the Atlantic Slave Route (Farrar, Straus & Giroux, 2007) and Wayward Lives, Beautiful Experiments (Norton, 2019), which received the National Book Critics Circle Award for Criticism, The Lionel Trilling Prize, and the Judy Grahn Prize for Lesbian Nonfiction. In 2019, she was awarded a MacArthur Fellowship. She has been a Guggenheim Fellow, a Cullman Fellow at the New York Public Library, a Fulbright Scholar in Ghana, a Whitney Oates Fellow at Princeton University, and a Critical Inquiry Visiting Professor at the University of Chicago. She is currently at work on a new book project, N Folio: An Essay on Narrative and the Archive.