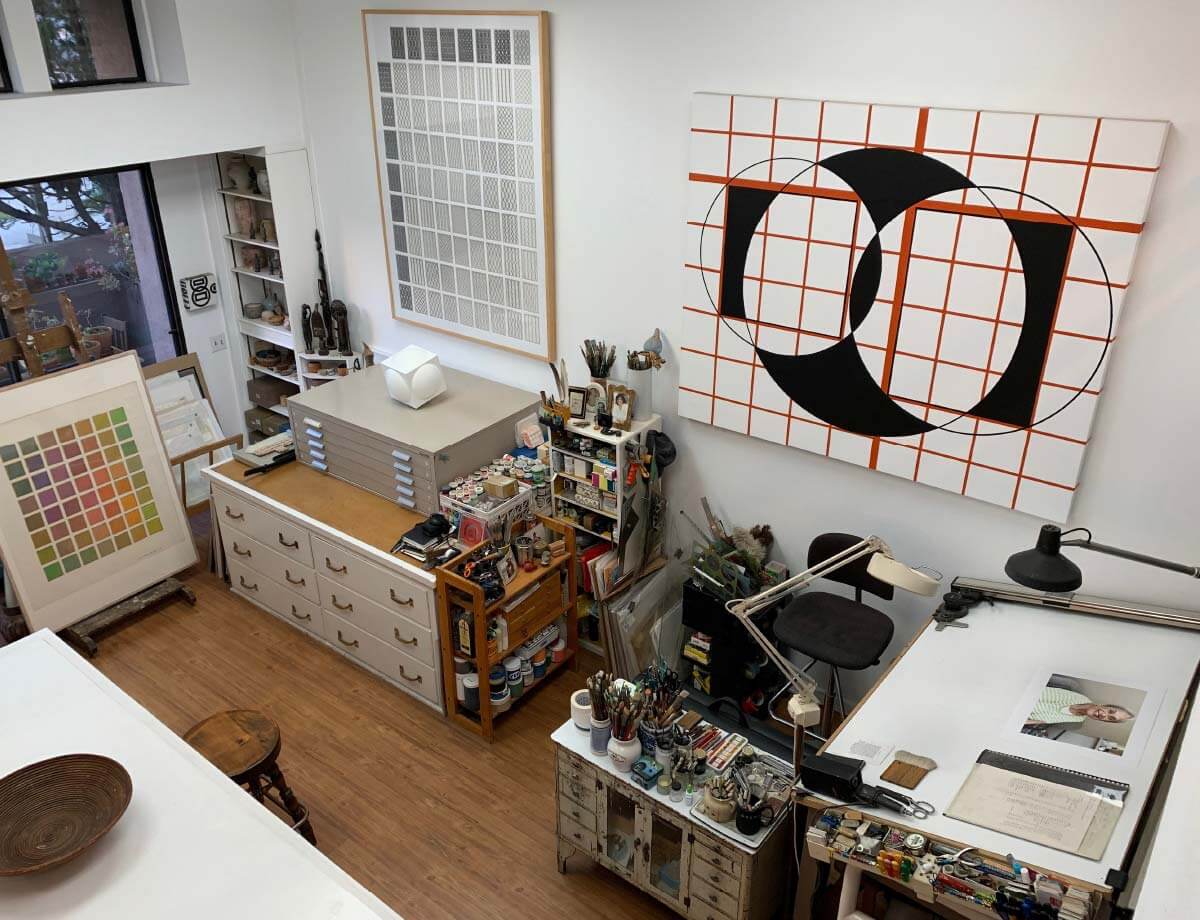 To coincide with a new exhibition focussing on two decades of her work at Lisson Gallery New York (New York, 3 March – 16 April 2022), we take a closer look at the studio of Channa Horwitz in Los Angeles, perfectly preserved since her death in 2013.

To complememt a new film made in the studio in 2021 are quotes taken from a conversation between Channa Horwitz’s daughter Ellen Davis and Lisson Gallery’s Ossian Ward in advance of an earlier exhibition of her work in London from 2019, titled 'Rules of the Game'. You can listen to the entire podcast here.

Davis is the daughter of Channa Horwitz, and is the archivist and manager of her estate. As a long-time collaborator with Horwitz she continues to choreograph, direct and oversee performances in conjunction with her mother’s work.

“So this is Channa’s studio and it's been kept pretty much intact. Curators, directors and so forth find it interesting to see how she worked … and the rest of the house is pretty much like a Channa Horwitz gallery, always up, because it's all of her work on the walls. …”

“Several bodies of her work are represented here and they all stem from an inquiry that goes deeper and deeper, where as she reduces her choices and finds a greater depth through less span, a greater investigation to the essence … through really following certain sets of rules with great rigour and great integrity, she looks to find out what would happen. That was actually an acting question that she had in her practice, ‘What would happen if I? What would happen if I did this, if I sliced it from bottom to top, from left to right, from front to back? What would it look like?’ ... One body of work grew out of another.”

“She was very rigorous about holding to her linear logic – to the rules that she set up. And if she found a mistake in her counting, it would invalidate the work and finding out how the play of her linear logic turned out.”

“It’s really a grand play of eight; of the number eight, which was very much influenced, I think, by watching me train as a ballet dancer. We count to eight in dance. As a very young child learning tap dancing she would help me count and learn the rhythms of the choreography. She was fascinated with choreography and how one can choreograph in time and space – and really wanted to see how she could do that graphically. And that's really how Sonakinatography was born. Literally it was born out of trying to explain movement of the beams for a kinetic sculpture proposal that she did for the Art and Technology show at LACMA … In doing that on eighth to the inch graph paper she came up with Sonakinatography … which incidentally can be performed. There have been expressions of this in dance, animation, light, and all different kinds of sound, from percussion, to synthesizer to chamber orchestra. ... She considered these drawings to stand alone in their graphic form but they can also be performed. She knew this notation system could be like a universal language.”

“Her tools varied appropriate to the medium.  When she was working with casein she typically used a ruling pen, which is a drafting tool. And most of her works in colour are done with this ruling pen.  A lot of the work that appears to people like thread is done with a ruling pen. She quite often used a rapidograph pen as well. And then of course, brushes for paintings.”

“She was very organised. I started archiving her work before she passed away, and have continued that, so inside drawers and storage have changed. Our things are also now integrated throughout the condo with what was here.”

“I, we both loved our relationship, collaboration and connection, and I think she was thrilled by it. On some level, because I am (just) her daughter, it might have been marginalised a little bit, but she really deeply respected me as an artist and embraced our being able to do that.”

“I always was fascinated with her process, and she shared it with me, I'm lucky enough to be able to say. I keep discovering. In living with her work and deepening into it through working with galleries and curators, and as my overview of all of it grows through archiving it, I keep discovering more and more all the time.”