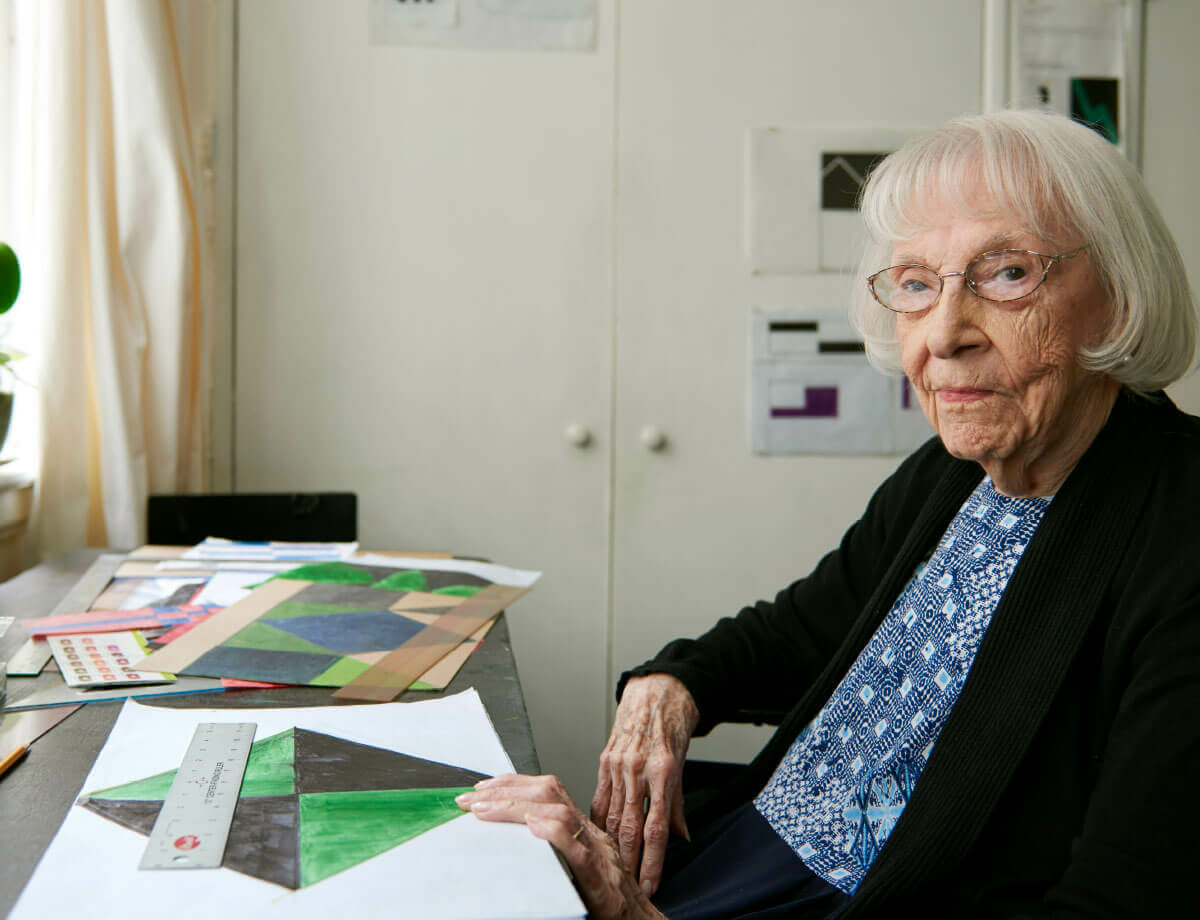 To celebrate the 105th birthday of Carmen Herrera on 30 May 2020, Lisson Gallery launches a new in-depth series, entitled Studio, on our artists' spaces, practices and preoccupations. This includes conversations, behind-the-scenes footage and access to thought processes and new bodies of work. As well as screening the documentary, The 100 Year Show, made in the lead up to her centenary in 2015, this celebration of Herrera's life and work focuses on never-before-seen images and videos of her studio and apartment in New York.

From architecture studies in Cuba to New York’s Art Students League to Le Salon des Réalités Nouvelles in Paris, Herrera's life has spanned continents and art movements, and demonstrates a persistent devotion to her work. She was a pioneer and a peer of many male artists who received great recognition in their time. Her story is just one example of the many great artists whose accomplishments were overlooked because of their gender, ethnicity or nationality.

First shot and published in the 2016 catalogue for Lisson Gallery's inaugural New York exhibition, these intimate images of Herrera's home and workspace were taken by photographer Philip Mauro. While many have not been seen before, the image of her table featured in a 2017 New York Times article: "The Old Table of a Beloved 101-Year-Old Artist", in which the artist told Emily Spivack:

"I acquired this table by chance in the 1960s. There was a factory downstairs from where I lived on East 19th Street where women would sew flowers onto hats. The factory owner was this Irish man who used to frequent the bar next door after work and would have his little boy wait outside for him while he had a few. I befriended the boy and one day his dad just showed up at my door and said the factory was closing and he had all kinds of furniture, including this table."

Carmen Herrera in the studio 21 February 2020

In another extract from that interview she noted that:

"My husband of more than 60 years shared this table with me, and it will always remind me of our years together. It’s also an essential part of my daily life and routine. It’s where I eat, read, sit and talk with friends, and often work. I think if the table represents my work in any way, it’s that it’s resilient, sturdy and unassuming. It is an object that quietly but firmly states, 'I am a table.'"

"The table is in the heart of my loft. It’s the main piece of furniture in my living space. My home has always been very pared down and simplified. It is a very utilitarian and comfortable space with no decorative excesses. I find inspiration in the simplicity of a straight line and many of the objects in my home, like this table, are just that ... simple."

These short video clips taken by Tony Bechara, Herrera's neighbour and friend of 40 years, depict Herrera working in the lead up to her 105th birthday, in October 2019 and in February 2020 sketching on new designs for paintings. In the 2016 catalogue essay, 'Abstraction’s Miraculous Perennial', which accompanied Herrera's studio shots, the American critic and curator Robert Storr wrote on her working method:

"This process of trial and error, of stating and then restating and then gradually honing forms takes place during the initial graphic phase of Herrera’s process, the phase in which even now as she begins her second century, she wholly commands. Sitting under a window with South light in the spare furnished, narrow floor through studio on 19th Street off Broadway which she and her husband moved into in 1967, Herrera initially delineates her compositions on graph paper then traces the result draws on vellum which she then fills in with magic markers – vellum that receives the ink but resists it enough to allow her to manipulate the density of colour and tone such that each gesture is as legible as a brushstroke."

"The wonderfully spontaneous vibrancy of these sheets issue from qualities necessarily absent from the paintings to which they ultimately lead due to profound differences between them in their facture.  In the drawings Herrera invents forms and proportions. In the paintings an assistant deploying masking tape and a common paint roller works closely with the artist to execute her design without superfluous inflections because all the crucial decisions have been made in advance."

The 100 Years Show was directed by Alison Klayman in 2015 in the lead up to her centenary. It follows Herrera's working process and includes various interviews, featuring important contributions from Tony Bechara, Dana Miller, Olga Viso and Nicholas Logsdail. Herrera recalls her youth in Cuba, her coming of age in Europe, and her battle for recognition in the male-dominated art world of 1950s New York.