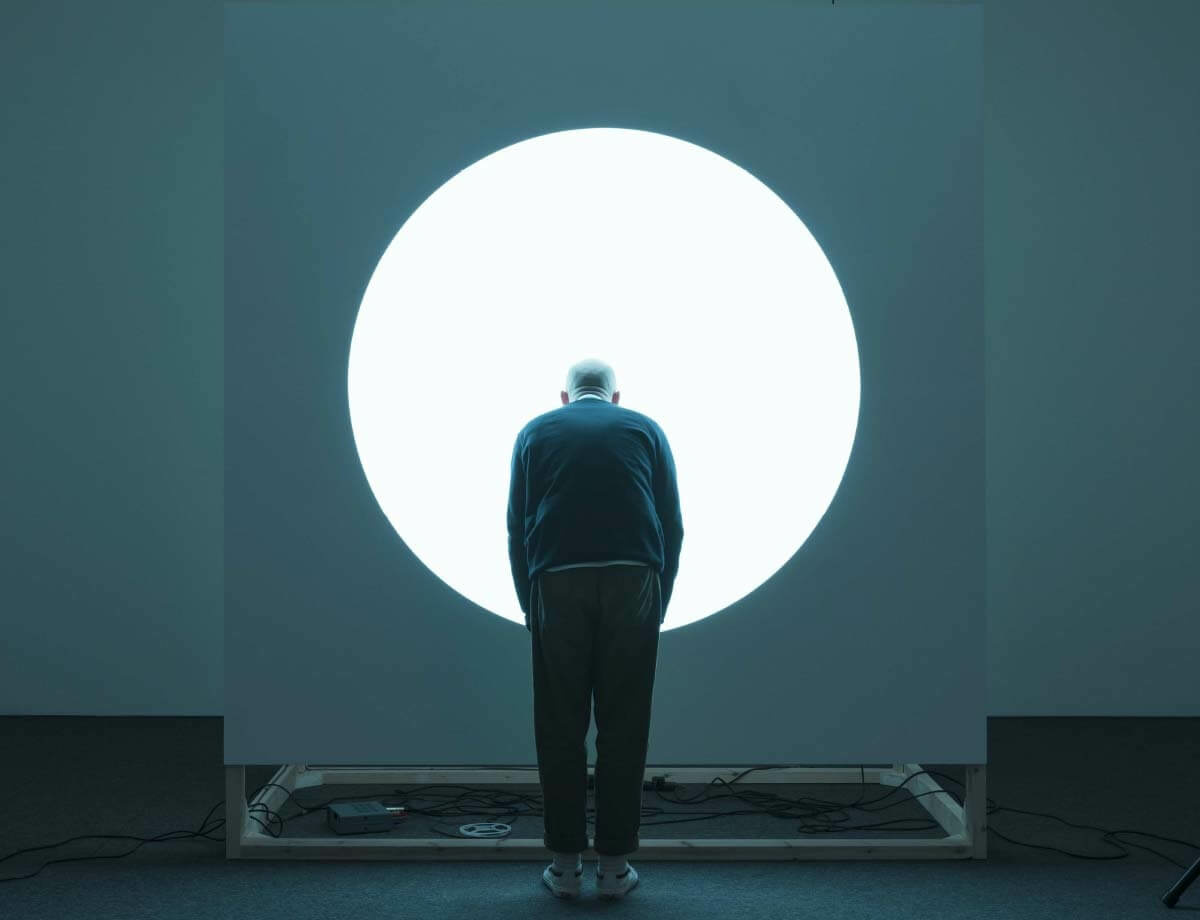 Haroon Mirza on the Emerging Paradigm

In October 2019, Southampton’s John Hansard Gallery presented ‘Haroon Mirza: Waves and Forms’ – a major solo exhibition by the British artist whose installations testing the interplay and friction between sound and light waves and electric current have won him international acclaim. Through immersive sensorial environments and anechoic chambers, video and performance, Mirza’s manipulated compositions purposely cross wires and leave their processes and materials exposed. Due to open at Aberdeen Art Gallery this March, the touring exhibition’s second instalment was first rescheduled and then cancelled due to forced closures during the coronavirus pandemic. With no physical show to document and no evidence that it would have taken place, Mirza began reworking components of the works included to create new iterations that would exist digitally.

One of these was Dreamachine 1/0, which recently premiered online as Lisson Gallery's featured Spotlight artwork. This screen-based work developed as a purely digital 'translation' of Dreamachine 2.0 – an experiential installation in which Mirza and collaborator Siobhan Coen delve into the subconscious and seek out spiritual enlightenment through specific combinations of retinal, aural and physical stimuli.

Haroon Mirza and Ossian Ward discuss the process behind the reworking of Dreamachine 2.0 into a new digital experience, the collaborative nature of Mirza's projects and research, and the various subjects currently informing them, from astronomy to AR.

"Because this show didn't ever happen, there were going to be no sort of remnants of the show, there was going to be no indication that it ever existed. We thought that would be a shame, so we suggested that we make an online presentation and translate the Dreamachine. The idea was, let's just make a digital version of this work, an online version rather than just having images. I think it seems a bit more appropriate when the content can be digital – whether it's video or programme sequences – to make new works that exist online, to transcribe the machine."

This 15-minute sequence of intermittent photic stimulation, entitled Dreamachine 1/0 (2020), has been developed as an online version of an earlier installation, itself made in homage to the original Dreamachine, a stroboscopic device created by Brion Gysin and William S. Burroughs with the help of Ian Sommerville. Their machine was a cylindrical form, with holes cut out of its surface, rotating on a turntable. A light bulb suspended in its centre radiated flickering light around the room at a constant frequency and induced hallucinations of geometric patterns when viewed with one’s eyes closed.

Artist Siobhan Coen initially reimagined this historical device using microcontroller-driven LEDs. During a residency at hrm199, Mirza’s studio platform, a dialogue began between the two artists to introduce sound into the system and work with frequencies relating to certain neural oscillations. Mirza says of the other influences for this work, which was also completed in consultation with neuroscientists at Imperial College: "We were also thinking about the practice of what’s known as shamanic drumming: a constant drumbeat of around 3Hz – 6Hz, which induces trance-like states probably due to stimulating theta waves in the brain. Then lots of advice from neuroscientists and programmers helped developed the piece further."

"[The Wave Epoch] is a longer project in the sense that it started with this series of works called Emerging Paradigm that I started in around 2016. They coincided with a device that we developed in the studio, a bespoke media device which synchs videos together, but also synchronises electrical signals with video. And so these works – Aquarius, The Wave Epoch and another piece called 9 11/ 11 9, or fear of the unknown – all developed in this series, which was the Emerging Paradigm series."

The first presentation of 'Waves and Forms' at John Hansard Gallery (October 2019 – January 2020) highlighted Haroon Mirza’s ongoing exploration of waveforms – how they are perceived, the emotional and physical responses they create and the various ways in which we relate to them. Each of the gallery's spaces was filled with new and reconfigured artworks that test the interplay and friction between sound waves, light waves, water and electric current, and our perceptual distinctions between them.

Among the works included were Pavilion for Optimisation (2013) – a purpose-built sound chamber designed to create maximum reverberation, with participants invited to enter and experience the continuous prolongation of a sound – and /\/\/\/\ /\/\/\/\ (Aquarius) (2017) which uses the Emerging Paradigm multimedia deivce to combine video, audio and LED elements in a 12-channel surround sound installation.

"We were in this sort of freefall state where there needed to be a massive paradigm shift, whatever that was – we weren’t really sure. So these works were about this new, emerging paradigm.

The Wave Epoch is a science fiction about what the next 2000 years may look like after this paradigm defining moment we are witnessing - the conceit is that science and spirituality have combined and replaced all forms of monotheistic religions to form an overarching global ideology. CERN is an archeological site that is being explored and interpreted as a site of ritual. Aquarius points to the ‘Age of Aquarius’ popularised in the ‘60s and ‘70s with the New Age movement. That's what New Age means, it’s this new age that's signified by the shift in our polar axis, which is an astrological thing. And it happens to be at this moment where we have this massive world crisis on many levels."

Adapted from the original four-channel installation, Mirza developed a single-screen version of /\/\/\/\ /\/\/\/\ (2017) for FACT Magazine that explores physics, consciousness and European identity, with a new mix of the audio by Jack Jelfs.

The 2017 installation takes the form of several elements, including 4-channels of videos, 8-channels of audio, 8-channels of LEDs and a semi-anechoic chamber, which come together throughout the space to make a single work. These elements are combined simultaneously with electrical signal illuminating LEDs and generating sound to create an audio-visual installation that is automated live in 12-channel surround sound. Read as ‘Aquarius’, the zigzag form is a typographic interpretation of the astrological sign and translates an undulating movement as a geometric version of a wave. The work references both constellation and astrological sign, as well as the Age of Aquarius, which the earth is about to enter and heralds an epoch of rediscovered harmony.

Skip_loop (2019) is a computer-generated animation of an undulating seascape – the illusion of natural beauty and continuity of movement collapsing every six seconds, when the loop repeats itself. This specific duration corresponds with the average viewing time of an artwork in a museum or gallery. Here, Mirza highlights the impact of digital media and new technologies on our attention span on how we might look at traditional artforms, such as landscape painting. Prior to this single-screen work, Skip_loop presented at the JHG was created specifically or the show and was itself a new realisation of an existing work from 2005.