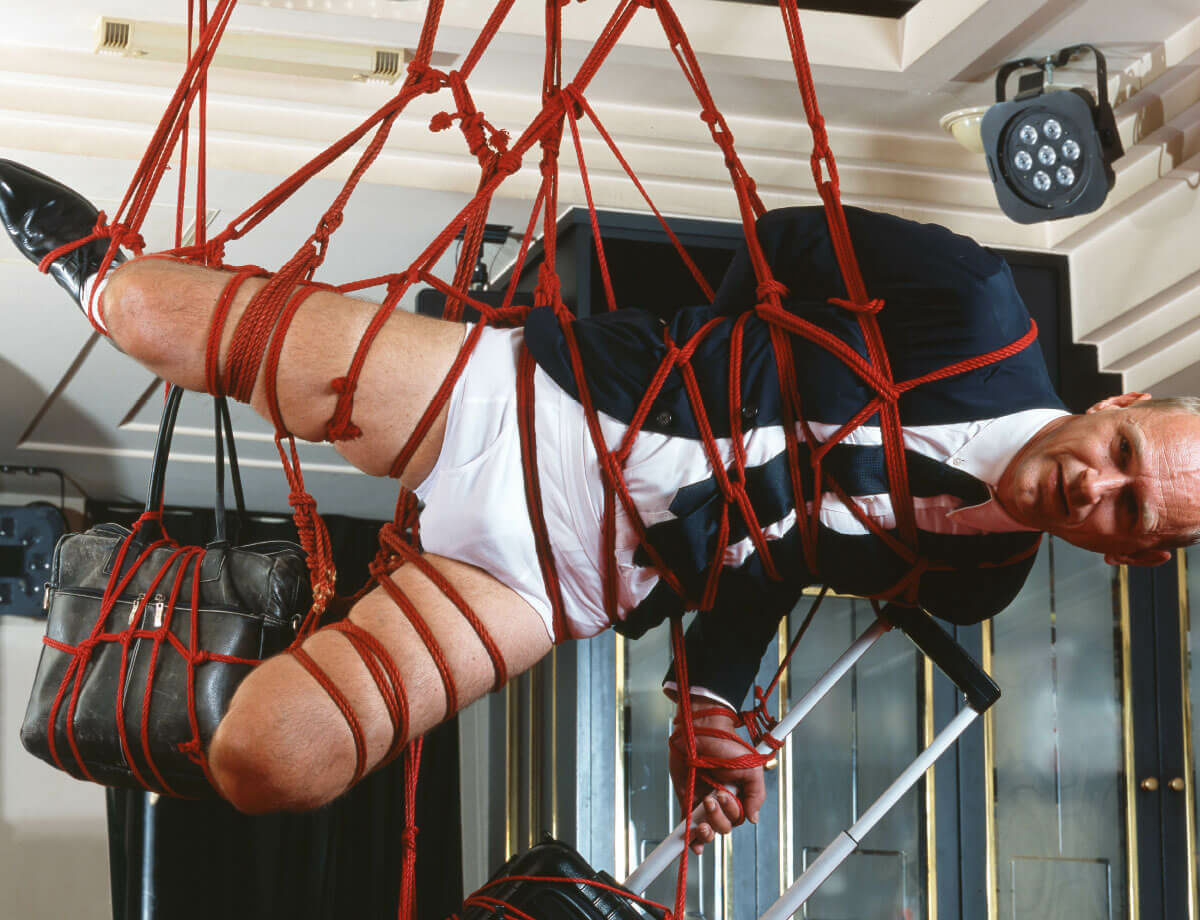 On 4 and 5 May 2020, Lisson Gallery held virtual tours around the Berlin apartment and studio of Christian Jankowski. Led by the artist and Lisson's Ossian Ward, the walkthroughs introduced Jankowski's 2011 film work Casting Jesus (screened by Lisson for one week as the final film in its first season of Spotlight Screenings), in which the artist invited a panel from the Vatican to audition actors vying for the ultimate role: playing the Son of God. Jankowski discusses this film in the studio tour – and how the potentially heretic artistic act was also one of collaboration and deference to the expertise of his ‘co-authors’ – along with a selection of other seminal films from his 30-year career that exemplify the often cooperative, performative nature of his work.

For his contribution to the 48th Venice Biennale in 1999, Jankowski learned Italian and called in live to five Italian TV fortune-tellers, asking them to predict his future as an artist and forecast the success of his Biennale contribution. The question he posed to each reflects concerns common to many artists: is this a good idea? Will I manage to make the work with contraints of money and time? Once the work is finished, will is be well received? And finally, will I be happy with my work? Jankowski recorded the conversations, and the largely positive answers, directly from television. As it turned out, the work was a self-fulfilling prophecy, and Telemistica contributed fundamentally to the artist’s breakthrough.

During a televised church service at the evangelical Harvest Fellowship Church in Texas, Pastor Peter Spencer invites Jankowski on stage. As agreed in advance, the artist collapses at the feet of the TV preacher and remains there motionless. Pastor Spencer uses the occasion to preach to his flock about the indivisibilty of artistic creativity and the creative force of God. Jankowski’s performance is, the Pastor explains, a ‘holy artwork’ that bridges art, religion, and television. The artist subsequently gets to his feet with a ‘Thank you God, for making this possible,’ that heightens his play on affirmation and subversion.

Here, Jankowski requested Latin America's largest broadcaster, Televisa, to reproduce an entire episode of the Mexican telenova series La que no podi ia amar (The One Who Could Not Love) with all lines of dialogue replaced by actors crying rather than speaking. Keeping to the previous locations, cast, and post-production procedure, the actors were able to hear their original script through earpieces, enabling their sobs to synchronise with the pace of the former episode.

With the work's title referring to La Marcha de la Humanidad en la Tierra y hacia el Cosmos (The March of Humanity on Earth and Towards the Cosmos, 1965- 1971) by David Alfaro Siqueiros – the world's largest mural in Mexico City – Crying for the March of Humanity creates a complex dialogue between the social and political influences of the mural and the telenova, and connects one prominent instance of melodrama to the grandiosity of Siqueiros’s title.

This work, produced in Warsaw, Poland, combines sports, arts, and history as Jankowski deals with the subject of public space and the function of memorials as signs of identities old and new. Weightlifters from the Polish national team were invited to lift monuments from the ground in an attempt to rupture perceptions around particular historical events, and to bring lightness to subjects with significant gravity. Syrena, a mermaid armed with a sword who serves as a Warsaw landmark, is able to be raised up high. But the monument to the Warsaw Genuflection, from 1970, turns out to be too heavy. The then US president, Ronald Reagan (to whom a monument from 2011 is dedicated), also refuses to budge, “just as he did in the era of the Iron Curtain,” says the professional sports commentator who follows the contest.

Jankowski revisits public spaces and artworks in Massage Masters, inviting esteemed massage therapists from the Tokyo area to diagnose the ailments of Yokohama’s public sculptures and treat them according to various massage traditions, in order to improve their chi. Each masseuse chose the sculpture best suited to their own technique, attempting to identify and alleviate the tension within the sculpture – whether originating from the material itself or the energy of the city. Rodin’s La Meditation, for instance, was given a foot massage, while a ninja sports masseuse worked on Astushi Hosoi’s dynamic abstract sculpture, The Wind Tells. In the Yokohama installation of the finished project, visitors viewed the works while positioned on massage equipment.

Drawing a connection between the constraints of travel in his life as an artist and the Japanese rope-binding tradition, Jankowksi paid a visit to a kinbaku mistress while on a trip to Kyoto. Aska, who runs an erotic nightclub, agreed to use her knotting techniques on Jankowski, stipulating that he wear a business suit like that of her clientele, along with underwear that she was to provide. The artist was tied up with his briefcase and luggage, suspended from the ceiling of Aska's establishment, and made to spin to a background of soft piano music. Four photographs accompanying the video depict Jankowski facing the four points of the compass.