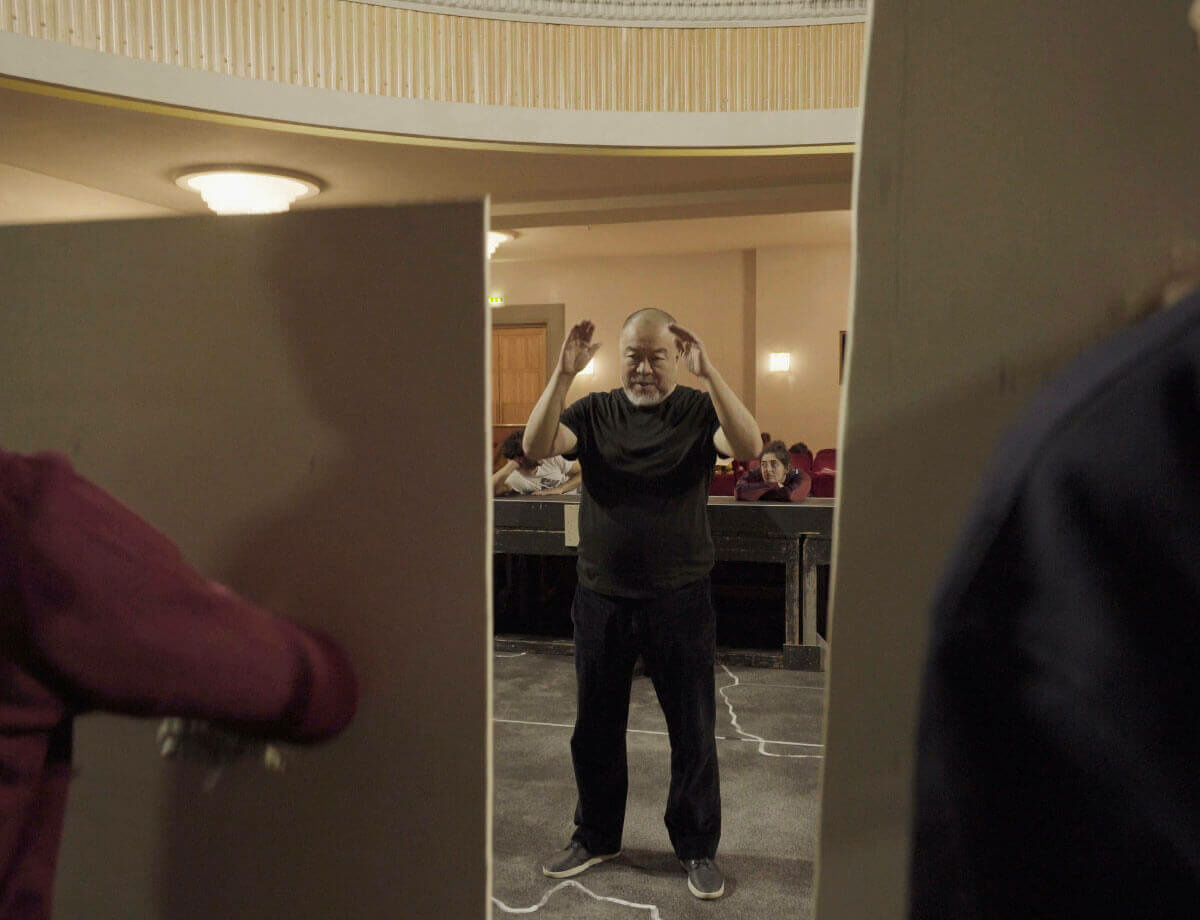 In a special interview conducted to coincide with a screening of the six and a half hour film work, Heaven and Earth (2014), Ai Weiwei discusses how he turned a traumatic public event into an ironic, painstakingly honest and haunting portrayal of injustice, through the medium of operatic song. In conversation with Lisson Gallery’s Curatorial Director, Greg Hilty, Ai delves into his use of performative scenarios – whether court cases or operas – for this and subsequent works, relating his use of performance, film and music to the better known documentary and activist sides of his practice.

Accompanying these videos is a never-before-seen selection of images from the sadly stalled production of Turandot in Rome, now postponed until March 2021, in which Ai hopes to draw on the mythology of China, the political and social realities of today, as well as his own biography and iconography.

“I know we're living in a fiction. We’re living in this political stage, in which even the legitimacy of control and also the law itself is not legitimate. So how to play with it and laugh about it at the same time? It's not an easy matter. Most people would just give up.”

Following Ai Weiwei’s secret detention and release on parole in 2011, the Beijing tax authorities charged Fake Cultural Development Ltd, the design firm associated with Ai’s architecture practice, with tax evasion. Ai denied the politically motivated charges and appealed the case through the legal system. In 2012, he created Heaven and Earth, an almost seven-hour long Yu opera based on the court transcript and proceedings of the first trial against Fake Ltd. Yu opera is one of China’s most recognizable operatic traditions, originating in Henan province.

“For me, it's always interesting when I start to build my artwork and social and political efforts all as one – it always works best. Because… I really fight, you know, using my own energy or acts to prove that justice can be achieved. We knew that court case, we could never win. But we win something else…”

Much as the evidence gathered against him was obtained by nefarious means and shrouded in secrecy (involving kidnappings, lengthy searches and confiscations), so the language in Heaven and Earth is couched in complex, obfuscating legalese and riven with dead ends. Despite the accuracy of the reenactment, the staging and deadpan acting perpetuate the air of farce around the proceedings. Indeed on 27 September 2012, in the company’s second and final appeal, the intermediate court upheld the original decision, although the tax authorities have still not enforced the original penalties placed on Ai’s firm.

“[Documentary film] is not subjective, you know, it’s just a recording of whatever happens in front of it. And the facts itself are political because they record the total political condition ­­– even just the direction the camera would point to. And I love that minimal effort to make a record of what is happening, because even during those most arrogant acts of authoritarian society, they don't like to see what they did twice... That's the most challenging – when you put your enemy into a human condition, because simply they try and ignore that.”

In a much more recent court appearance, Ai Weiwei’s installation of more than 3,500 salvaged life jackets from the Greek Island of Lesbos, Soleil Levant, for United Nations International Refugee Day (20 June 2017) was misused in a Volkswagen advertisement without authorization. This resulted in a lengthy trial in Denmark, depicted here by Gianluca Costantini after which the artist was awarded significant damages.

Dress Rehearsal for Turandot at the Metropolitan Opera, 1987

“I think I love these restraints. I always say that freedom only comes out of restraints. Now the difficulty is that there is no absolute freedom – it is abstract really – and only when you work under the most impossible conditions, can you see how our freedom can shine.”

This screening also references the production of Puccini’s Turandot (1924) originally scheduled to open at Rome’s Teatro dell’Opera in March of this year. As its director, Ai still plans to stage the opera in the near future, including reflections on the recent protests in Hong Kong and the coronavirus pandemic.

Ai is biographically connected to this particular work having performed as an extra at the production of Turandot by Franco Zeffirelli and James Levine at the Metropolitan Opera in 1987. He and his brother, the poet and writer Ai Dan, performed as executioner‘s assistants in Act I.

Original sketch by Ai Weiwei for the stage set of Turandot

Model of the Turandot set design, based on a world map overlaid with ruins

“It's about the myth of China, this very crude and beautiful lady and she generates so much imagination of the male who is trying to marry her… China, of course, is still on the centre stage, so I thought, even this very old story still can be renewed. I designed it, not only just the concept but every detail, every drawing… that very comprehensive design relates to so many issues. I would integrate my understanding of the world today – such as migration, the Hong Kong fights and also Coronavirus – into the stage design.”

The story revolves around the relationship between the individual and society, the regime and the people, the established system and its outsiders, life and death, memory and imagination. If modern society is understood as a ruin – an incomprehensibly deformed state of its once seemingly clear cultural and natural fundamental order – it becomes possible to connect the historic imagination of Turandot with today’s reality.