Lisson Gallery returns to Art Basel Miami Beach, presenting highlights from the gallery programme at Booth G21. As part of the inaugural presentation of Meridians, the fair's section for large-scale presentations and performances, Laure Prouvost will present an immersive installation which functions as real-life family-run travel agency.
Following the recent announcement that Lisson Gallery will exclusively represent the estate, the centrepiece of the booth will be Hélio Oiticica's Penetrável Macaléia (1978), a large-scale work which culminates his series of ground breaking colourful, inhabitable sculptures known as Penetrables. The title of Penetrável Macaléia pays homage to legendary Brazilian composer Jards Macalé, who was a close friend of Oiticica’s and a key figure of the artistic movement in Brazil known as Tropicalismo. Viewers, or participators, as Oiticica preferred to call them, are intended to enter and navigate the seven-foot metal cube framed with brightly coloured mesh panels surrounded by brick, rocks, sand and tropical plants. Created shortly after his return to Brazil following seven significant years in New York, Penetrável Macaléia references Oiticica’s numerous earlier bodies of works — the experimental filmic series he created while living in the U.S., the dazzling capes known as parangolés, which he frequently incorporated into his performances in urban environments around the world, as well as references to Brazil’s favelas, or shanty towns, whose aesthetic, architecture and culture provided endless inspiration.
A rare and important painting by Carmen Herrera will also be on view. Quartet (1961) demonstrates Herrera's lifelong preoccupation with black and white. Of the series, Herrera has said, "For me black and white are colours...these paintings are about rigour, about setting up a challenge for myself as a painter." Herrera's use of multiple canvases is significant, and is represented in only a handful of seminal works. With Quartet, she paints onto the handmade frame surrounding the four canvases, using the edges as an additional way to delineate the surface and subvert the painting's two-dimensionality. There is a clear dialogue between these early multi-paneled works which expand the surface into the third dimension and Herrera's sculptural pieces, known as Estructuras.
Concave Convex Mirror (Oval) (2019), a new stainless steel work by Anish Kapoor, will be included. Measuring 150 cm in diameter, this engaging work is a part of a new series which debuted at Kapoor's exhibition at Lisson Gallery New York, highlighting recent monumental large-scale stainless steel pieces and colourful wall-based sculpture, and on view until 20 December in both gallery spaces. A major two-part exhibition is presented concurrently in Beijing at the Central Academy of Fine Arts Museum and the Imperial Ancestral Temple by the walls of the Forbidden City. Kapoor's first solo museum show in China, it is on view until the end of the year and features some of the most significant and celebrated works of the artist's career.
The booth will also feature a new cast iron root sculpture by Ai Weiwei, Palace (2019). This series of works was the focus of a recent exhibition at Lisson Gallery in London, Ai Weiwei: Roots (2 October – 3 November 2019). A new 80-inch square painting by Stanley Whitney as well as a new black and yellow canvas from Mary Corse are included. Also on view are works by Cory Arcangel, Allora & Calzadilla, James Casebere, Tony Cragg, Ryan Gander, Rodney Graham, Shirazeh Houshiary, Jason Martin, Tony Oursler, Joyce Pensato, Bernard Piffaretti, Laure Prouvost, Pedro Reyes and Leon Polk Smith, among others.
At Meridians, Laure Prouvost will present the immersive and interactive installation Uncle's Travel Agency Franchise, Deep Travel Ink, NYC (2016-ongoing). This hypnagogic environment, replete with watercoolers, plants and posters and a waiting area, conflates both time and space, adding to the quasi-authenticity of the scene, which is a frequent trope in Prouvost's practice. Prouvost represented France at this year's Venice Biennial, presenting the acclaimed film and installation Deep See Blue Surrounding You.
Art Basel Miami Beach is on view from 5 to 8 December 2019.
Image: Carmen Herrera, Quartet, 1961. © Carmen Herrera 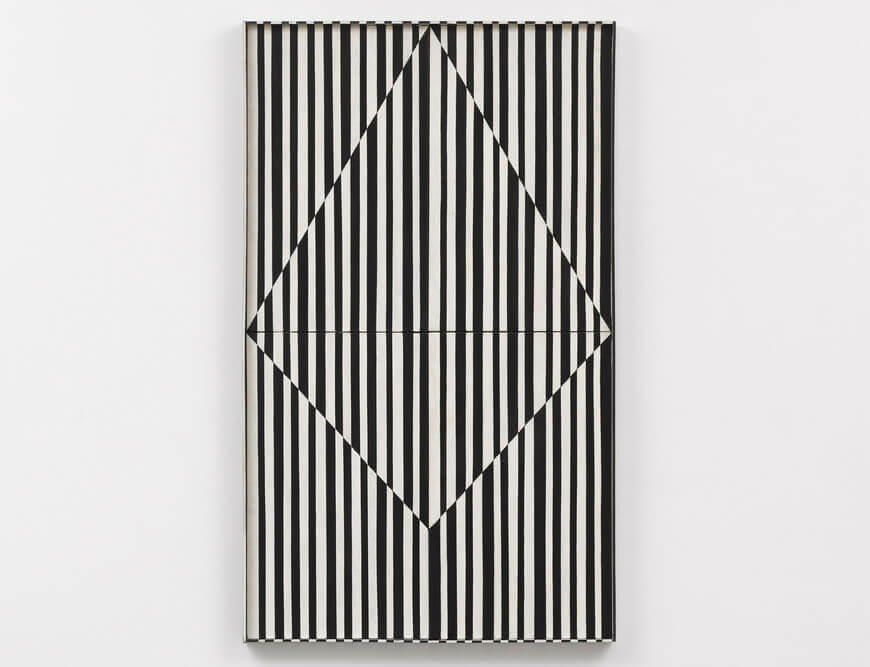