Profile of Anish Kapoor in The New Yorker

The wildly successful sculptor, whose works incorporate everything from reflective steel to goopy wax, has turned an enormous palazzo in Venice into a showcase for his work. It’s a statement of power—and a bid for his legacy.

The Palazzo Priuli Manfrin, in Venice, was bought four years ago by the artist Anish Kapoor. It was constructed in the sixteenth century for the aristocratic Priuli family, but it is thanks to the efforts of a later owner, Girolamo Manfrin, that the palazzo has its storied place in Venetian art history. Manfrin was an outsider from Dalmatia—born “in the midst of mud and shit,” as one detractor put it—who amassed a fortune in the tobacco trade. He bought the palazzo, which featured a ballroom with a thirty-foot-high frescoed ceiling, in the late seventeen-eighties. Manfrin wanted to decorate his new home with “pictures of the highest quality,” but, not being a connoisseur, he had advisers find him paintings by such masters as Mantegna, Giorgione, and Tiepolo. Manfrin boasted of acquiring masterpieces “without paying any attention to the expense involved,” and his expenditures had the desired result: the palazzo became a required destination for any cultivated visitor to Venice, and remained so after his death, in 1801. Three decades later, Mary Wollstonecraft Shelley wrote that “the collection is in every respect magnificent, and deserves many visits.”

Manfrin’s art was sold off in the late nineteenth century, with many works going to Venice’s Gallerie dell’Accademia. Thereafter, the palazzo changed hands repeatedly, and eventually fell into dilapidation. By the end of the twentieth century, the building was serving as a convent for a community of nuns, who had converted its upper floors into monastic cells. By 2012, it was deserted and on the market for twenty million euros: a crumbling fixer-upper with faded frescoes and a courtyard that, if not quite filled with mud and shit, was prone to frequent flooding.

Kapoor, who was born in Mumbai in 1954, and has lived in Britain since the early seventies, is the kind of blue-chip artist who, had he been working in the eighteenth century, might have sold some pieces to Manfrin’s advisers. Kapoor is best known for works that explore the interplay of mass and void, and for beguiling experiments with optics. His sculptures induce both awe and disquiet. His mirrored works—in particular, concave disks that measure several feet across and cast complex patterns of reflection—have regularly been snapped up by collectors at art fairs ever since he started making them, in the late eighties. The mirror sculptures not only create a destabilizing aura; they reflect light and sound in ways that tend to enhance whatever room they are displayed in. Museums and foundations have an equally large appetite for what Kapoor calls “non-objects”—such as twisted stainless-steel works so reflective that their shapes are hard to discern—and also for sculptures, made from natural materials like sandstone or alabaster, that are punctured with mysterious holes.

Although these signature pieces are alluring, some of Kapoor’s work is alarming, even repulsive. For an exhibition at the Royal Academy of Arts, in London, in 2009—the first solo show there by a living artist—he presented “Grayman Cries, Shaman Dies, Billowing Smoke, Beauty Evoked,” an array of lumpy forms made from coils of concrete extruded from a 3-D printer. Kapoor’s working title for this installation was “Between Shit and Architecture.” In 2015, the Rijksmuseum, in Amsterdam, displayed his “Internal Object in Three Parts,” a triptych of canvases thickly encrusted with red and white silicone that evoked freshly slaughtered viscera. One of his most celebrated works, “Shooting Into the Corner,” consists of a cannon that fires off bucket-size cannisters of blood-colored wax at regularly timed intervals; Kapoor has spattered the walls of many a museum with his gory goop.

Kapoor has often embraced the challenge of working on an enormous scale. In 2002, he became the third artist to receive a commission from the Tate Modern, in London, to create an installation for the gigantic Turbine Hall, part of a former power station. In collaboration with the architect and engineer Cecil Balmond, Kapoor installed a vast red membrane—manufactured in France, by a company that usually makes coverings for sports stadiums—then stretched it over and between three giant steel rings. The work, which fully occupied the daunting space, was titled “Marsyas”—an allusion to the myth, also depicted by Titian, in which a satyr is flayed for defying Apollo. Even for those visitors for whom the reference was unfamiliar, the work still packed a wallop. “It looked like some part of the body, except you were not really sure what it was,” Donna De Salvo, who curated the installation, and is now at the dia Foundation, in New York, told me. “Anish’s view of things is deeply rooted in the physical, the bodily, the psychological, and in how those things intersect.” In 2009, in Kaipara, New Zealand, he inserted an even larger steel-and-membrane sculpture, “Dismemberment, Site I,” into a hilly landscape; shaped like a double-sided trumpet, the work, which is more than eighty feet tall, resonates with the wind.

Read the full feature, by The New Yorker's Staff Writer Rebecca Mead, in the magazine's 22 August 2022 issue, and online here.

Reviews of Kapoor's dual exhibition at the Gallerie dell'Accademia and Palazzo Manfrin, Venice, can be read here. 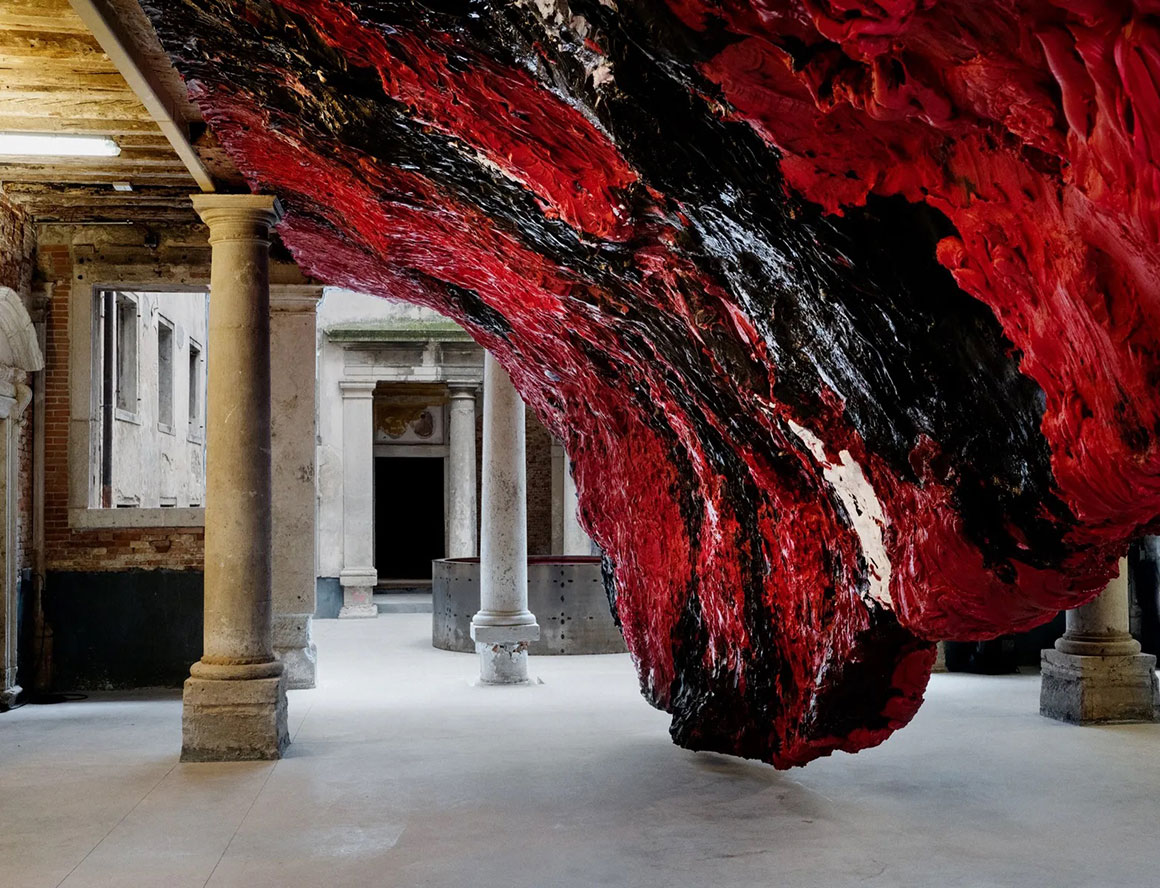