Now open at WIELS, Brussels until 14 August, Lucy Raven’s ‘Another Dull Day’ proposes a disarticulated reading of the landscape of the Western United States, turning our gaze away from the distant horizon to focus on a forcefield of geographic, material and historical tensions.

In this exhibition, Raven presents two ambitious film installations, one that premiers at WIELS and the other recently commissioned by Dia Art Foundation, New York, alongside a new body of photographic work. Together, they explore the properties of extreme pressure and material state change occurring respectively at an explosives range in New Mexico and a concrete plant in Idaho. These new works see Raven use imaging techniques ranging from high-speed cameras to drones and analog shadowgraphy, putting the physicality of the very image at stake: nebulous shockwaves rattling the camera or shrapnel piercing photosensitive paper.

Demolition of a Wall (Album 2) was shot at an explosives range in Socorro, New Mexico. Meaning ‘aid’ or ‘help’, Socorro was given its name in the 16th century by Spanish colonizers as a token of gratitude: as the Spaniards emerged from a very barren stretch of desert, native Piro Indians offered them food and water. More recently, the area has been physically imprinted with the history of atomic bomb testing and hypersonic weapons research. Presented on a freestanding LED wall, the suite of short films observing the extreme pressure surging forth after the detonation of an explosive charge. Raven purposefully omits the actual blasts and instead makes us look at what occurs in the immediate aftermath: shock waves traversing the landscape.

This is echoed in Socorro!, a series of analogue shadowgrams that document the shockwaves of exploded raw materials on large format photosensitive paper and negative film. To achieve this, Raven built a room-sized black box that acted as a camera inside the ballistic sciences lab of the New Mexico Tech University. In it she fashioned a lighting mechanism that triggers a stroboscopic flash timed to the exact moment of detonation, precisely capturing the exploded materials as they travel at mach speed (a unit indicating the speed of sound, named after the Austrian physicist Ernst Mach (1838-1916)). Rather than pointing to the trajectory of a single bullet, Raven unleashes an array of different materials, each generating a series of interacting shocks and turbulent wakes.

The film Ready Mix observes a different materiality: that of cement, gravel and water being combined into concrete at a plant in Bellevue, Idaho. Concrete is the most ubiquitous building material on the planet, but its environmental impact is lethal: straining water supplies, emitting CO2, and extracting limited natural resources at a breakneck pace. WIELS, itself a stronghold of fortified concrete built by the architect Adrien Blomme in 1930—during the heyday of modernism— offers a resonant framework for Ready Mix. The film speaks to the material creation of private property and industrial infrastructure, both historic and contemporary, by way of investigating the processes that produce its main component—concrete. 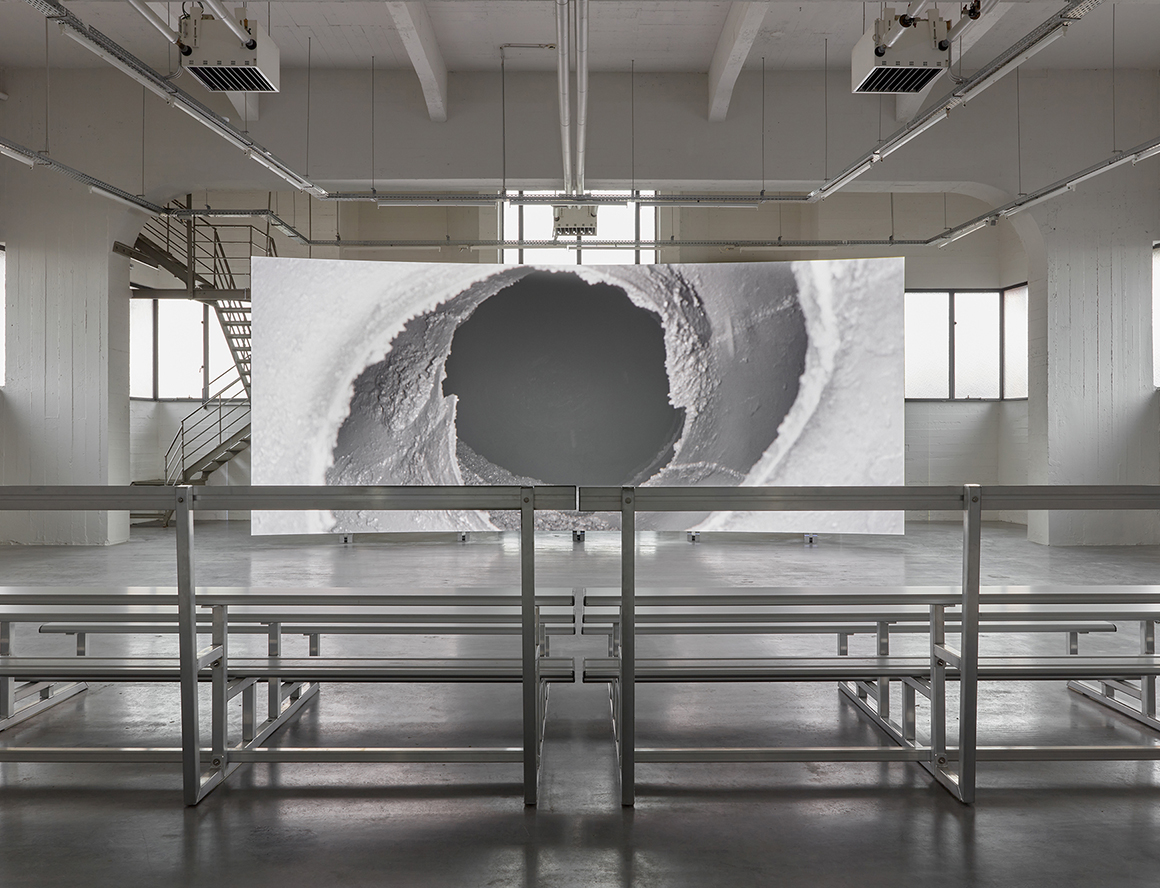