Lisson Gallery is pleased to return to West Bund Art & Design this year with a focused presentation of works by Marina Abramović, Anish Kapoor and Richard Long. This presentation of three masters of contemporary art explores the ways in which we orient ourselves in the world and how even static viewpoints can shift and tilt around us, renewing and questioning our connections to the very ground beneath us in meaningful ways. Each artist employs earthly materials to create experiences of the mind and body, in search of a higher state of consciousness and self-awareness.

For Marina Abramović, the body has always been both her subject and medium. On view at the fair will be a new series of alabaster works, Five Stages of Maya Dance (2013-2018), a collection of luminous and immaterial alabaster self-portraits that combine performance, light and sculpture. These portraits are both performed studies of the artist’s internal life, as well as physical presences that dissolve into a ‘landscape’ of intricately carved stone. "I test the limits or myself in order to transform myself,” says Abramović, “but I also take the energy from the audience and transform it. It goes back to them in a different way.” These works are created through a unique process in which the artist’s portrait is rendered in a 3D scan and mechanically cut and etched into stone. The work comes to life when it is dramatically lit from behind, creating shadows that mimic the contours of the face, while the negative space created in the carved alabaster produces an optical illusion. In each of the five portraits Abramović depicts emotional responses that recall the Mayan dance tradition of transporting the human body into a supernatural state. This continues the artist’s exploration into spirituality, and the effect is reminiscent of the treatment of deities in ancient tradition. Similar works from the alabaster series were included in a solo exhibition of her work at Light Society in Beijing earlier this year.

Lisson Gallery’s booth will also feature a new mirrored work by Kapoor, entitled Mirror (Apple Magenta mix 2 and Brandy Wine Mist) (2019) and a recent relief painting, Untitled (2019). The artist’s voids in stone and stainless steel are inviting – each sculpture lures the viewer into an inner realm. As the viewer’s head moves closer to these indeterminate spaces, the eyes try to see deeper inside and viewing becomes a kinaesthetic experience – initiated by the artwork but consummated by the viewer. There is a strange intimacy involved in the process, a feeling of being involved in the work, although physically outside it. Kapoor is interested in the ways that abstract art – the sheer materiality, form and colour of what is there – allows for experience, both for the artist and the viewer. As he says, “This is an idea of art making: the physical process being related to some internal process. This notion of the material that one’s working with – stone – and colour, whatever else, coming to be a home for one’s psychological material, one’s psychological matter. In the end, what one’s working with is oneself.” Alongside the presentation at the fair, Kapoor will present his first solo museum show in China, across the Central Academy of Fine Arts (CAFA) Museum and the Imperial Ancestral Temple, by the walls of the Forbidden City in Beijing.

Alongside this, Richard Long’s mighty compass work made in slate, Four Ways (2014) – directed towards North, East, South and West – also places the audience in a position of auto-contemplation and re-orientation. Comprised of standing stones of Delabole slate from Cornwall, UK, this raw earthen material asserts both an ancient and contemporary relationship to land, transforming the natural landscape of the English countryside into sculpture. Based on his walks into the world, Four Ways suggests a divergence of different paths to choose from, which nevertheless all converge in a central meeting point that unites us all: “The significance of walking in my work is that it brings time and space into my art; space meaning distance. A work of art can be a journey.” The booth will also include Long’s mud painting diptych, Untitled (2018), a monumental work that embodies the active and physically demanding process of Long’s storied career. This presentation follows the recent Richard Long solo exhibition at Lisson Gallery in Shanghai. 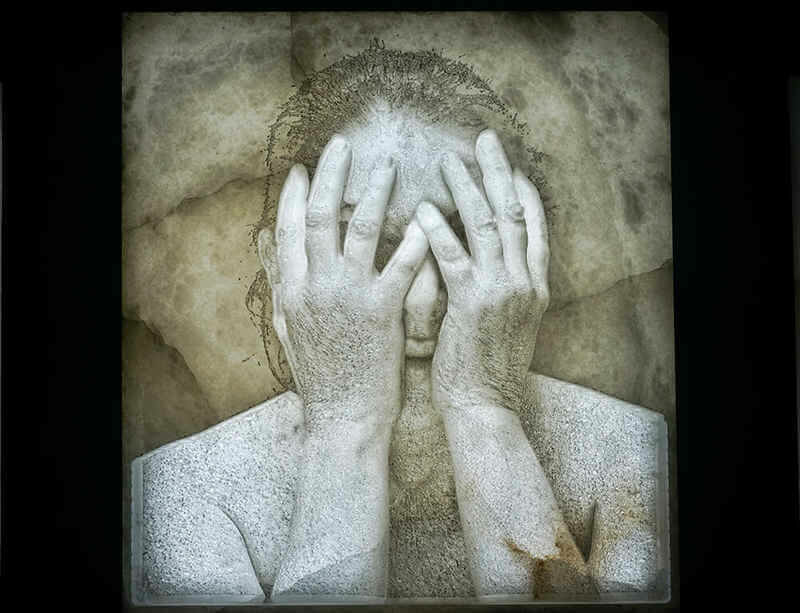