Laure Prouvost presents a sensuous, participatory solo presentation for Lisson Gallery's 2022 Frieze booth, creating an immersive environment within the fair. The audience is invited into the embrace of the octopus and other exotic creatures – a space of no borders but rather a unification and expansion of narratives across painting, film and sculpture, as well as protest banners and silk flags. Subtly subversive, the artist challenges the viewer to engage with critical issues such as immigration, climate change, species extinction and societal polarisation.

Three freestanding, large-scale paintings – SEE STAR IN ONE ANOTHER, SEE STAR TOGETHER AS ONE and SEE STAR MORE SEE (all 2022) – create an evocative enclosure within the booth. Prouvost – who represented France at the 2019 Venice Biennale, and was awarded the Max Mara Art Prize for Women in 2011 and the Turner Prize in 2013 – is known for creating environments where the senses congregate, adopting an intuitive, bodily approach and often addressing the viewer directly. The main protagonist of the paintings is an octopus: a supernatural character frequently seen in Prouvost’s work, often referred to as a metaphor for the planet as one of the oldest minds that exists today. The octopus is also a strong symbol for the giving of life and the sacrifice of motherhood (after a mother octopus lays her eggs, she stops eating and wastes away, dying before the eggs hatch). An octopus’ organs are located in her tentacles, so she thinks by feeling and feels by thinking – and, as she does not contain capacity for memory, she encourages us to forget what we know and focus on the present experience.

The octopus and her network of creatures also star in Prouvost’s films. Across multi-panel paintings and films exhibited together – such as Four For See Beauties (2022), a 15 minute film originally commissioned by Kiasma Helsinki for ARS22, and currently on view at the Museum of Contemporary Art Busan – the tentacles intertwine amidst the arms of a starfish and other marine animals within the deep blue sea.

The multi-panel canvases at the centre of the exhibition contain openings at various points to allow for visitors to participate and physically merge with the installation. Some breaks in the canvas include pre-attached gloves for hands to be inserted into, which themselves hold flags containing notes of protest such as NO MORE FRONT TEARS, HERE AS ONE WE MELT and TRANVERS IN YOU (all 2022). This physical act reminds us of the inherent power of reaching out, towards not only our fellow beings but also the non-human world, encouraging empathy with each other and a sense of becoming one.

A large-scale tapestry on the back wall of the booth, entitled I wish you could see my face (2020), is based on Prouvost’s film Monolog (2009), and includes imagery of multiple arms overlapping, enveloping a bright star and galloping horses. The film also addresses the fallibility of language, interweaving excerpts of footage, voiceover and text in a surreal and witty parody that challenges the notion of identity and institutional norms. Alongside this is Taking Care (Love Letter to Fellow Art Work) – which debuted in 2020 on Lisson Gallery’s ‘Spotlight Screening’ series – serving as an online lament for the disappearance of the direct experience of art objects in space, as well as for the human contact we all craved in isolation.

Also visible through these holes are several glass pigeons atop plinths which visitors may recall from the artist’s imaginative French Pavilion exhibition at the 2019 Venice Biennale, as well as her solo exhibition at the Manchester Jewish Museum last year.

Outside of the fair, the octopus visits other areas of London this October through a public commission with CIRCA, with Prouvost activating an AR experience in Piccadilly Circus that brings her to the Shaftesbury Memorial Fountain. The artist also presents a new video work on the Circus billboards, exploring the migration of birds and other-than-humans as a metaphor to question borders and immigration.

For Frieze London’s Indra's Net section, Shirazeh Houshiary presents a new painting, The Songs of the Earth (2021). This work is unique in her oeuvre, which tends to be more abstract and metaphysical in nature. However, it is entirely in keeping with Houshiary’s deepest existentialist concerns and ongoing readings on biology, evolutionary thinking, and planetary consciousness. She states, “I have spent my entire time weaving the interconnected net of life with the thread of breath. The net reveals the connectedness of everything in the universe: the stone, to bacteria, to frog, to me and you, and to the other side of the universe. It has been a powerful journey. You can call it Indra’s Net or web of life or web of meaning or spider’s web.”

Houshiary has been making paintings, sculpture, drawings, video animation and public art since the early 1980s — works which engage us in a phenomenological understanding of space, while evincing the labour intensive process of their own making.

Indra's Net is a focused section of the 2022 Frieze Art Fair, curated by Sandhini Poddar. Derived from ancient Buddhist and Hindu thought forms, Indra’s Net refers to an ethics of being, where an individual atom holds within it the structure of reality. Imagine a vast bejewelled net – at every nexus there is a reflective orb that mirrors and refracts every other orb in its entirety. Each part is held within the whole in a system of dependent origination. All sentient life is interconnected; shifts to one atom subtly alter the rest.This group presentation brings together leading international artists whose practices are informed by this prescient metaphor. In various media, we learn of ancestry, history, language, consciousness and futurity as being bound to the earth, which serves as a perennial witness through the arc of time. 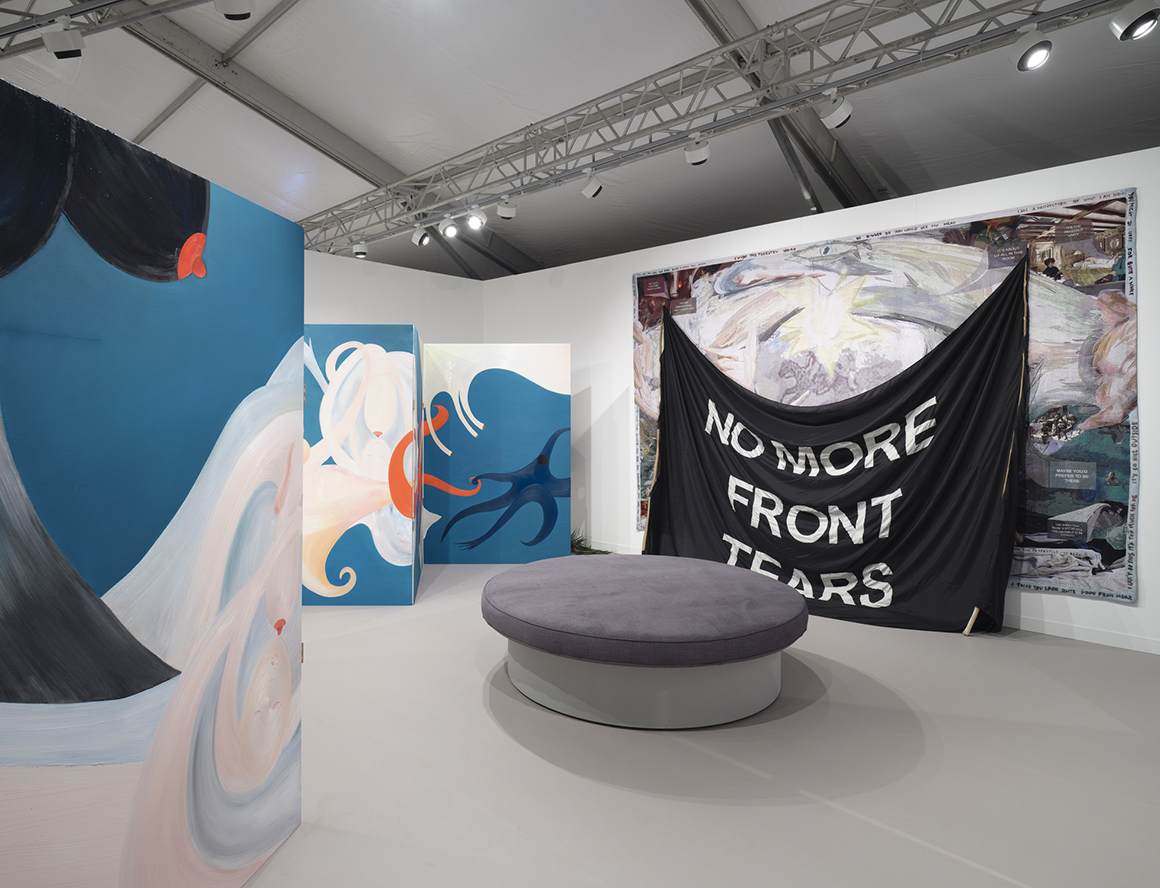