“I began making shaped paintings in 1990, while working in Galisteo, New Mexico. I was inspired by the landscape but wasn’t interested in depicting it. Instead I wanted to give a sense of moving through it. I was searching for a format that didn’t seem to have a fixed beginning or end and which alluded to the curvature of earth one feels in vast spaces, and to the state of constant flux in all things. I thought of these shaped configurations as a kind of dialogue between myself and the horizon.”
Lisson Gallery is pleased to announce the representation of New York based abstract painter Joanna Pousette-Dart. A solo exhibition of recent paintings and works on paper will open at the gallery’s Tenth Avenue location in New York on 29 February. Her work will be featured on the gallery’s booth at Frieze Los Angeles from 14 - 16 February.
Born in New York to abstract expressionist painter and founding member of the New York School of painting, Richard Pousette-Dart, and having studied painting at Bennington College in Vermont amongst the likes of Greenbergian Formalists Kenneth Noland and Jules Olitski, Joanna Pousette-Dart’s experience as a painter rises from rich tradition. However, despite this traditional modernist background, her paintings remain anything but conventional. Pousette-Dart’s shaped paintings are unique in their melding of formal and poetic concerns, and take their inspiration from many sources: Islamic, Mozarabic and Catalonian art, Chinese landscape paintings and calligraphy, Mayan and American Indian art, as well as the landscape itself, to name a few.
In the early 1970s, Pousette-Dart began living and working intermittently in New Mexico. Her perceptions of the place deeply influenced her paintings, ultimately resulting in the abandonment of a rectangular format in the 1990s for works composed of curved panels. The dynamic configurations of these works evoke the constantly shifting light and form, the vastness of the spaces, and the sense of the earth’s curvature that she experienced there. Her paintings take many forms, each with its own dynamic sense of expansion and compression, buoyancy and gravity. The painted contours of the interior shapes create an added complexity, sometimes echoing the contours of the canvas, and at other times challenging them. Her use of color suffuses all elements with a sense of light which feels redolent of the natural world.
Pousette-Dart’s work was the subject of a recent major solo exhibition at Museum Wiesbaden in Wiesbaden, Germany in Summer 2019. Her paintings were also included in the group exhibition Aspects of Abstraction at Lisson Gallery, New York in 2017.
Click here for more about Joanna Pousette-Dart
Image:
Joanna Pousette-Dart
3 Part Variation #4 (Triptych), 2012-13
Acrylic on canvas on shaped wood panels 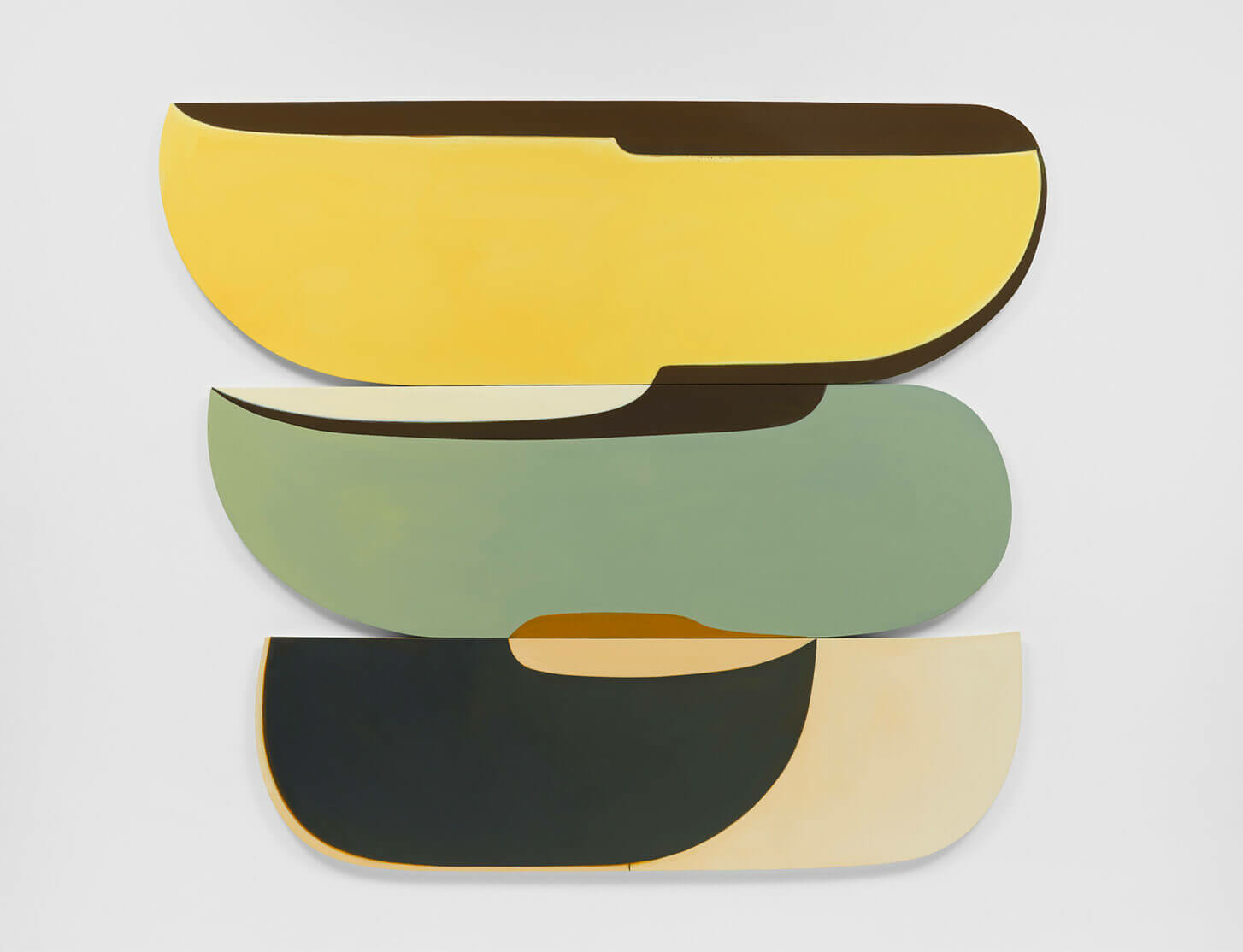