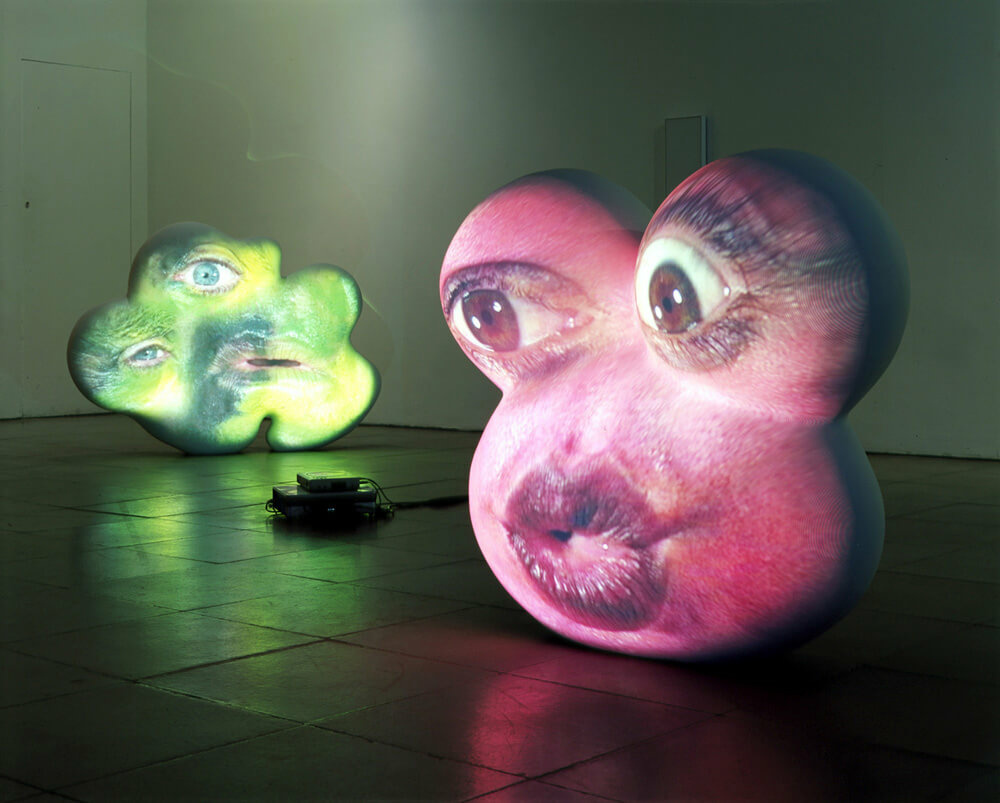 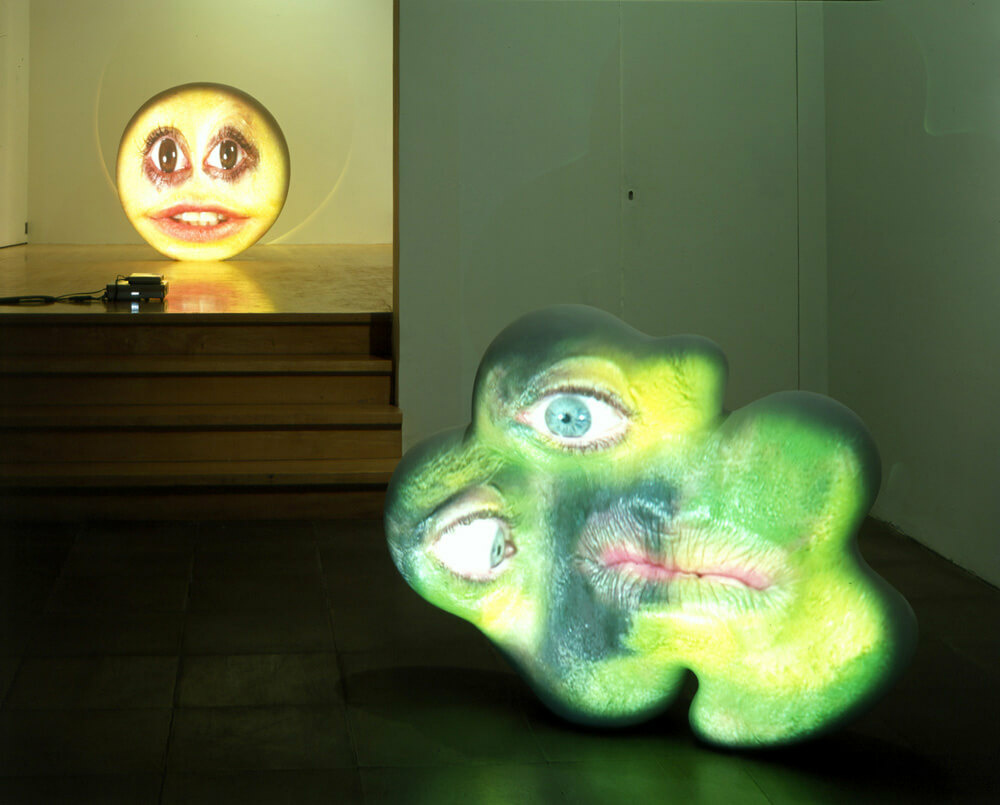 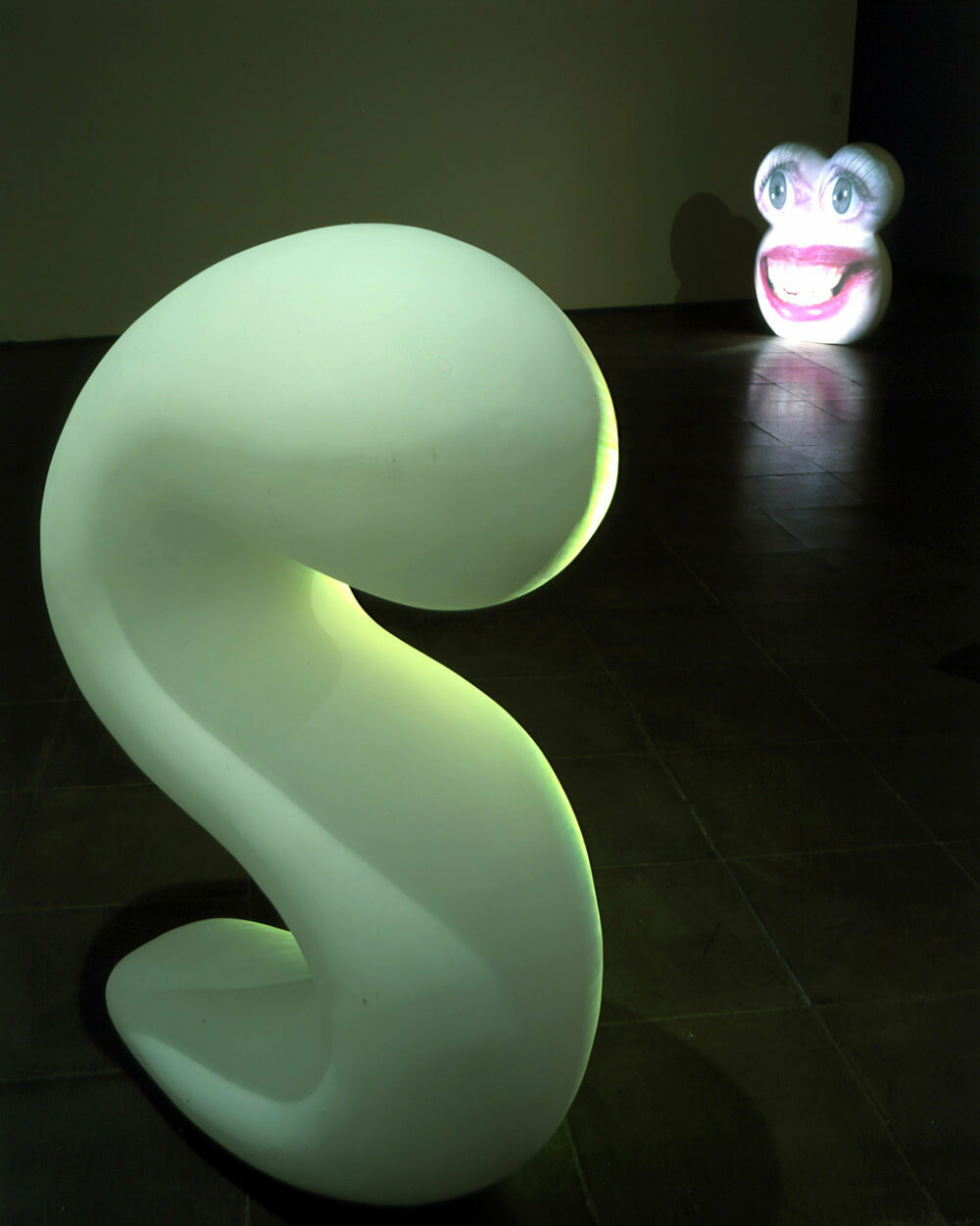 In this new body of work, Oursler returns to the deceptively simple device that made him famous whereby he constructs an elaborate installation of comically ghoulish faces projected onto amorphous convex sculptures. Disembodied, mismatching bloodshot eyes, fat lips and snaggled teeth whisper and exclaim like bulbous poltergeists while conspicuously absent noses accentuate the grotesque overall impact of these oddly endearing creatures. Eyes blink and swivel; mouths frown, smile and pucker while uttering barely audible words through nearby speakers. Listen closely and you may hear one face complain, “You treat me like garbage. I told you I love you but I don’t. Thanks for nothing” while another bug- eyed male tries to fend off anxiety by muttering to himself, “You’ve been making new friends—reward yourself with a smile”.

The real success of these works is due to the fact that though they are highly entertaining to watch, they also captivate on an emotional level by the sheer poignancy and familiar angst of their internal monologues. They are at once seductive yet vaguely unsettling, gripping the viewer in their disorientating psychological mini-dramas.

Tony Oursler has had recent solo exhibitions at the Instiut Valencià d’Art Modern, Valencia Spain; the Museo D’Arte Conemporanea, Rome, Italy and Magasin 3 in Stockholm, Sweden. The latter included an outdoor installation and projection “The Influence Machine Stockholm”. The Influence Machine was first exhibited in Madison Square Park in New York City and Soho Square in London. “Introjection”, the artist’s mid-career survey, was on view from 1999 to 2001 at the Williams College Museum of Art in Massachusetts, the Contemporary Arts Museum in Houston, the Los Angeles Museum of Contemporary Art and the Des Moines Art Center, Iowa. In 2000, Ourlser’s installation “The Darkest Color Infinitely Amplified” was presented at the Whitney Museum of American Art, and the Tate Gallery in London.