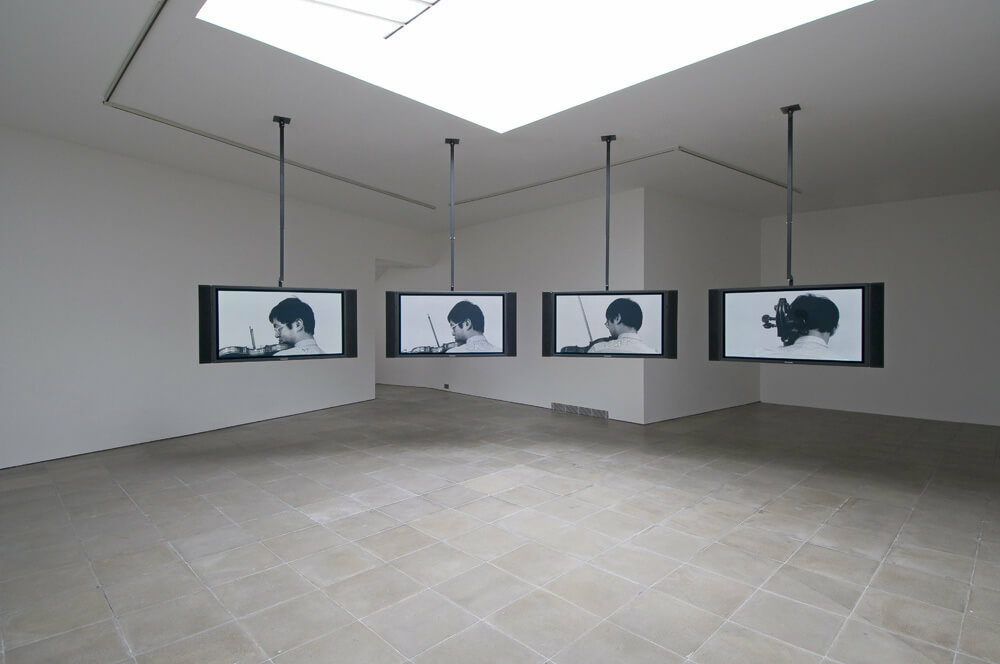 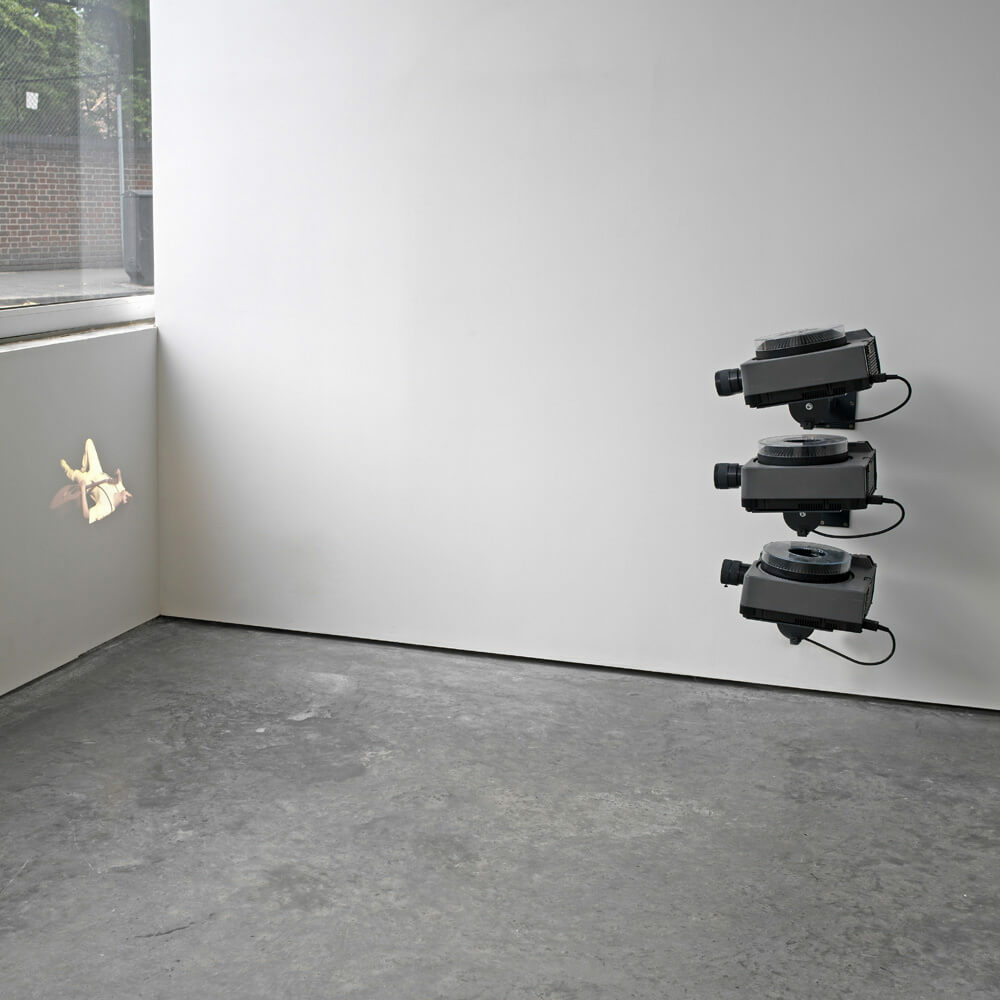 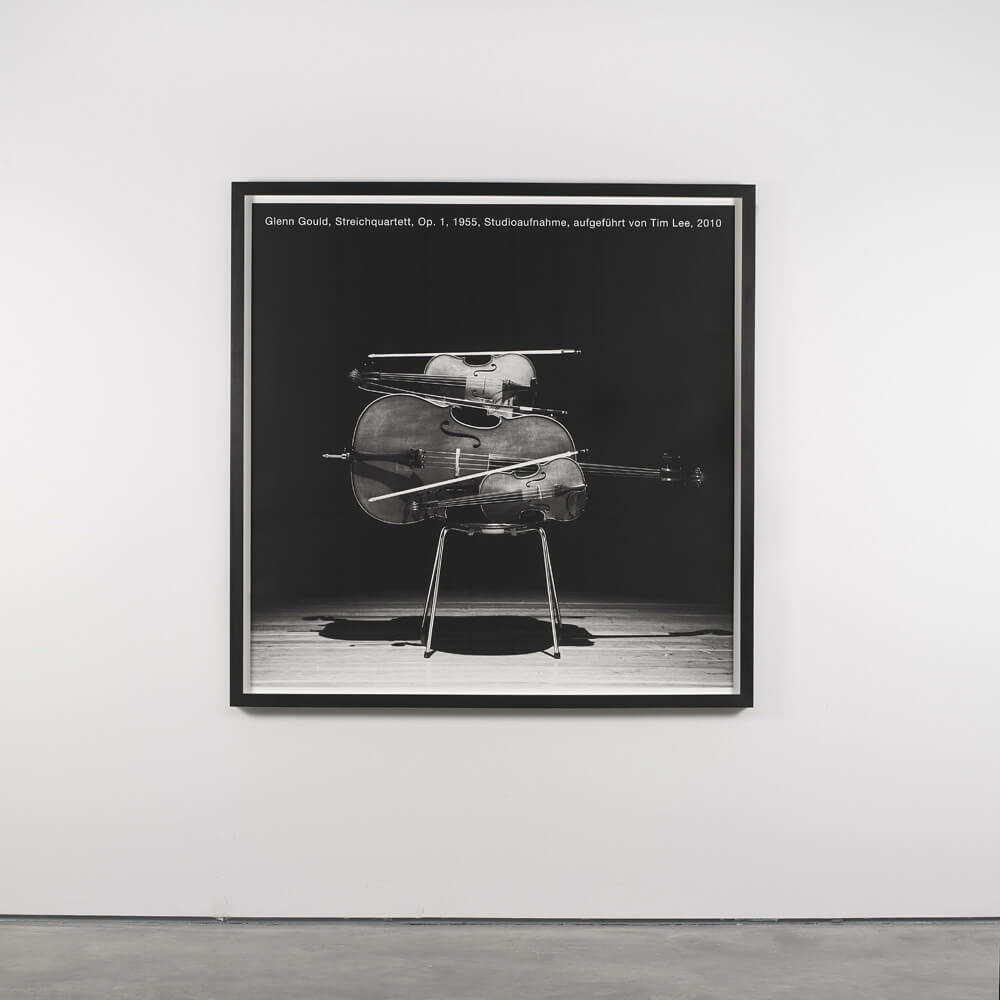 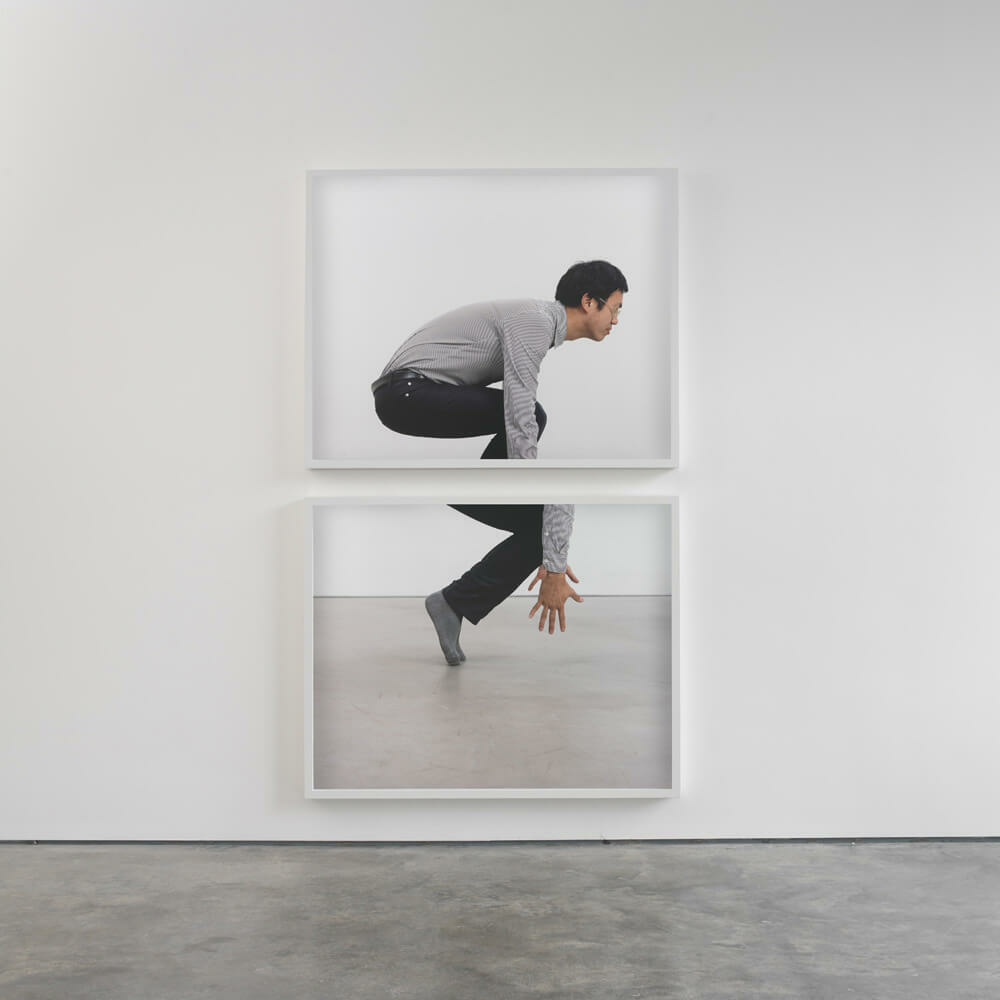 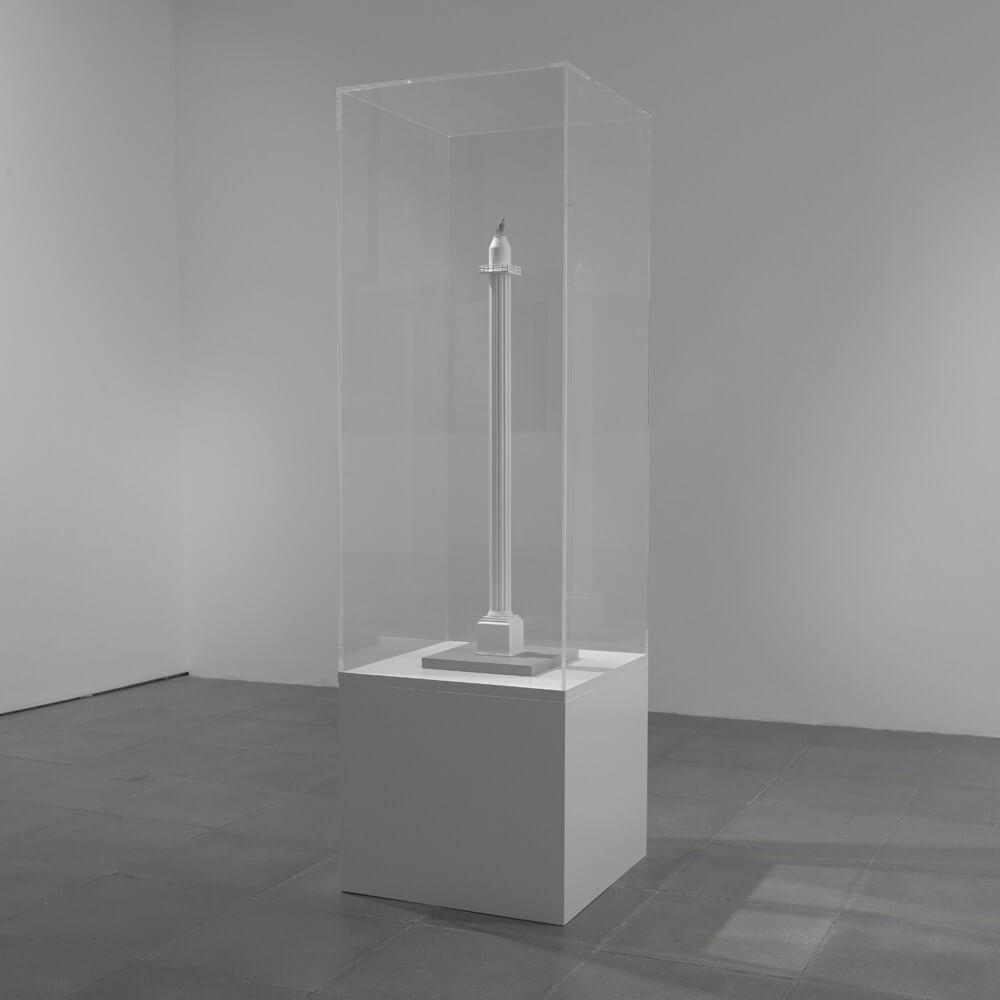 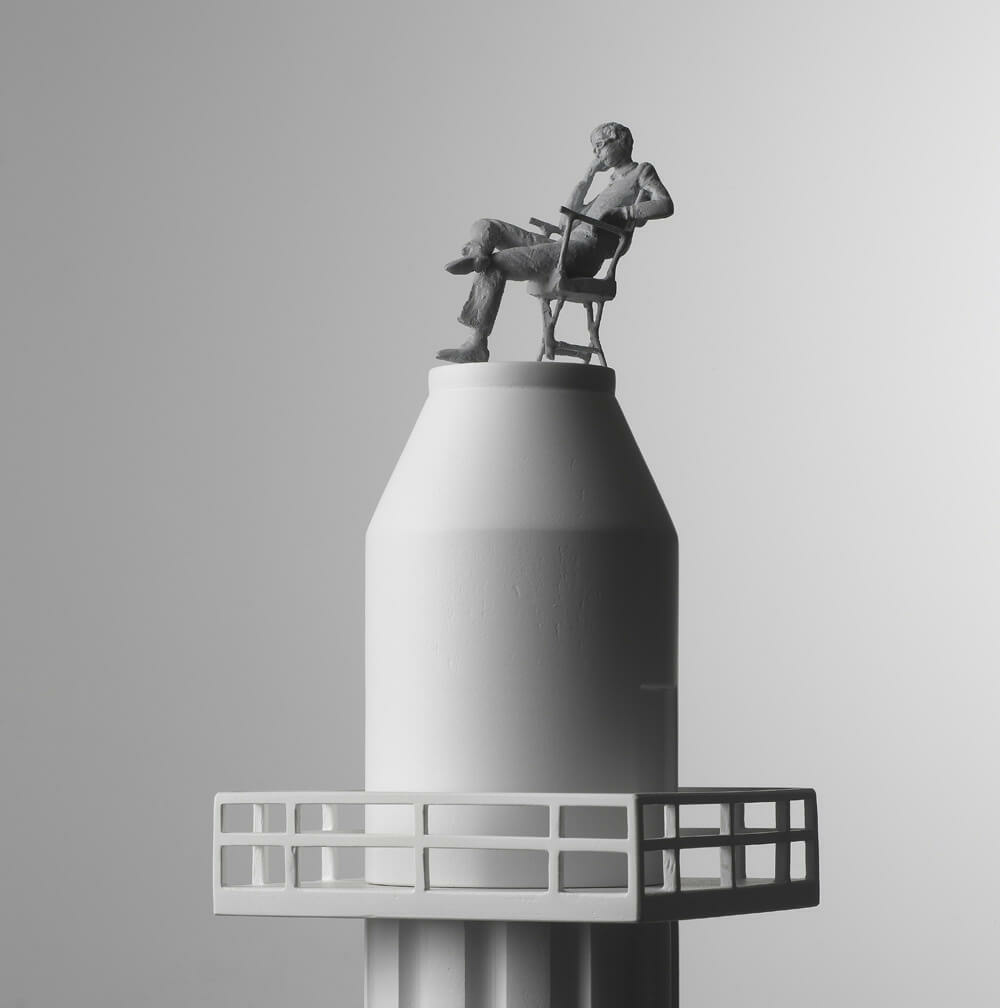 Lisson Gallery is proud to present Solo Quintet (1897-1979), a new exhibition by Tim Lee. Working with photography, video, text and sculpture, Lee continues to explore his interest in reconstructing and re-imagining seminal moments in art history and popular culture. Often treading the line of the absurd, Lee frequently uses humour as a vehicle to decode specific moments in the lives of various individuals. Drawn from disparate fields, these key figures include Glenn Gould, Buster Keaton, Merce Cunningham, Stanley Kubrick and Neil Young.

In the works on show Lee suggestively inserts himself into key moments in the history of his subjects’ lives. Using a combination of formal strategies, that include cutting, multiplication, splitting and framing, Lee unpicks our knowledge of these individuals, prompting us to consider how the public persona for each is constructed. In doing so he also proposes a relationship between these subjects and potential new ways of reading public figures.

In the four channel video installation String Quartet, Op. 1, Glenn Gould, 1955 Lee turns his attention to the year that the Canadian pianist Glenn Gould recorded both his seminal recording of the Goldberg Variations and published his first and only composition, written not for solo piano, but for a string quartet. Appearing as the four musicians playing the cello, viola and two violins in a performance that was recorded note by note, Lee reflects on our limited awareness of him as a composer while utilising innovative studio recording strategies that Gould perfected later on in his life as a performer.

The disparities that exist in our understanding of Gould are also explored in The Idea of North, Glenn Gould, 1967, a model of a proposed monument that features a tall, narrow column upon which sits the precariously balanced model of Gould leaning back in his famous chair. Acting as a de facto directional compass with Gould’s head facing due north, the monument alludes to his career as a broadcaster and his radio program The Idea of North, a meditation on Northern Canada and its people.

Untitled (Buster Keaton, 1897) depicts Lee as Buster Keaton falling down a flight of stairs. Re-imagining the moment when Joseph Frank Keaton earned the nickname ‘Buster’ from Harry Houdini after tumbling down the stairs aged eighteen months and stoically shaking off the injury, Lee’s film features multiple takes of Lee rolling up a staircase with each frame later edited and sped up in reverse. Projected from a specialised 16mm film looper designed in a step formation, the resulting awkwardness of Lee’s movements evokes the jerky, slapstick quality of Keaton’s silent films in a never ending circuit.

Rust Never Sleeps, Neil Young, 1979 recreates the introduction of Neil Young in the concert film of his live tour. With three 35mm slide projectors—each colour-keyed in red, green and blue—casting the same image, all three projections noisily converge spotlight-like to produce a black and white still image of the artist sleeping on stage with a guitar.

The exhibition also contains two photographic works, the first of which, Untitled (Stanley Kubrick, 1945), replicates a portrait of Stanley Kubrick taken in the mid-40s when he was just beginning his career as a photojournalist. In the photograph, Lee, as Kubrick, appears to be taking a self-portrait of himself in a mirror, an idea that runs counter to our later understanding of the director as recluse. In the second photograph Solo, Merce Cunningham, 1953, Lee appears as choreographer Merce Cunningham during a solo performance, when the public’s perception of modern dance was beginning to crystallise. The image, split and combined into two parts, depicts an uncoordinated picture of an elegant performance, with each part dividing the body in such a way that the performer’s body appears relaxed and at ease in the top and tense and strained below.