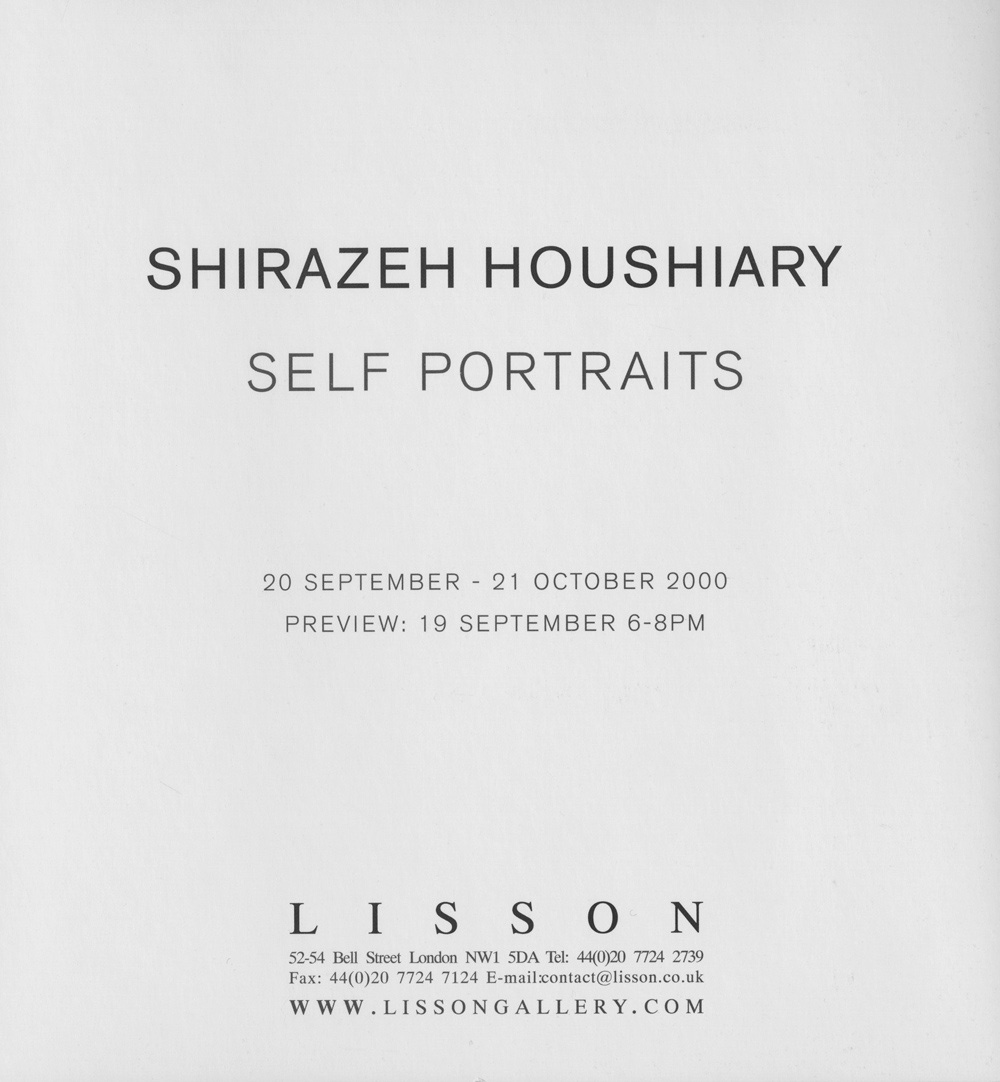 "Self portraits" is Shirazeh Houshiary's first exhibition in London for six years and the first ever in Europe to be dedicated exclusively to her work on canvas. Born and raised in Iran, Houshiary came to London in 1974 to study at Chelsea Art College. After graduating, she rapidly established herself as one of the leading sculptors of her generation. Her early work comprised of welded and patinated metal forms reminiscent of Islamic calligraphy whilst her more recent work, lead lined containers, patterned within in gold, silver and copper, drew on the Islamic tradition of sacred geometry. During the last five years she has produced only three sculptures, the most important of which is a large tower in lead and gold in front of Sheffield Cathedral which is still in progress.

Those who know Shirazeh’s work well might be surprised by the direction it has taken. Recently she has explained that she had begun to feel trapped by her sculptural practice which relied increasingly on outside fabrication and yearned to return to a more private process thus dedicating herself to works on canvas. Houshiary’s first works on canvas date back to 1992. Deservedly they were given equal prominence to her sculpture at the Camden Art Centre (1993) and the Turner Prize exhibition (1994). Houshiary will immerse herself in one of the larger canvases for five to six weeks, executing the graphite "drawing" in a slow dance around the canvas, laid on the floor, or bending into it as if in prayer. These are not fashionable gestures toward shamanism, but part of a practical process which has evolved naturally over the years. In her earlier work the "marks" with which she created geometric patterns on the canvas were composed of minutely composed sacred words, repeated like a mantra. In the more recent works, words and forms have dissolved and light has been released. These "self portraits" cannot be described as paintings or defined as drawings. It is as if Houshiary has divested the canvas of all its painterly associations and returned it to its natural state as cloth from which an image will imperceptively emerge. The image permeates the fabric, is neither depicted nor delineated the artist is haunted by the idea of Veronica’s veil. The canvas is masked with a uniform coat of paint. Diaphanous glazes create a new warp and weft. The shimmering surface entices the spectator towards a veil traced in graphite. As the veil dissolves, the spectator is ensnared in an ephemeral moment, the light pulsating within the canvas. These works have not been idly described as self portraits. The presence of the artist may be as vestigial as traces of breath on the surface of a mirror but her feelings are palpable. It is not surprising that such fragile work should defy every attempt to photograph and reproduce it. Our experience of a self portrait by Houshiary remains as intimate as the process of its creation.