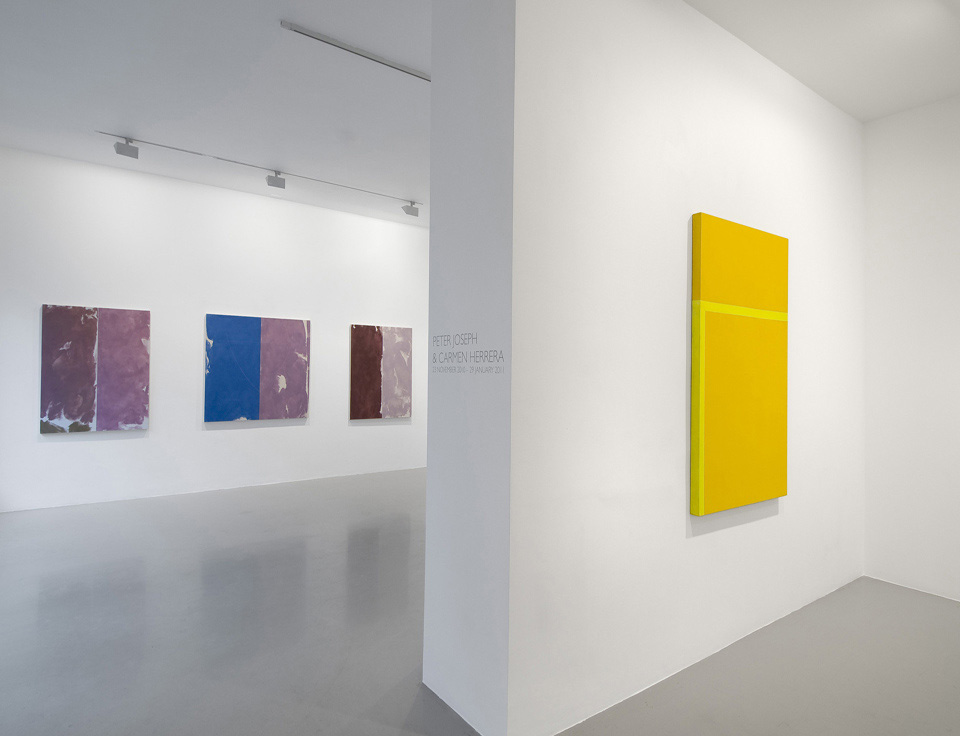 There is much that Peter Joseph and Carmen Herrera share in their lifelong dedication to abstraction. Both senior figures, their work avoids being heroic. Paintings often hinge on the juxtaposition of colour brought together in a way that creates a certain unity; titles are usually statements of material, visual fact. Joseph is best known for his two-colour paintings, those of the 1960s being boldly geometric, relying on primary colours and optical effects; for Herrera the more lyrical abstraction of her early paintings gave way to a focus on pure geometry. The precision of her work in black and white from the beginning of the 1950s, the simplicity of their geometric structure and austerity of her palette, prefigure and anticipate the optical, kinetic and hard-edge minimalism of 1960s New York with artists such as Ellsworth Kelly, Frank Stella and Kenneth Noland. However for Herrera she refutes the tag of Op Art feeling it too simplistic a description of what she was attempting to achieve. Likewise Joseph, regarding himself as a classicist, considers the association with minimalism unconvincing, citing early Venetian and Florentine painting as a more appropriate touchstone.

Cuban artist Carmen Herrera was born in Havana in 1915, moving frequently between France and her homeland throughout the 1930s and 40s, before finally settling in New York in 1954. Born in 1929 Joseph is the only artist to have shown with Lisson Gallery since it opened in 1967. Despite the visionary nature of her work and association with artists of great reputation, including Barnett Newman and Leon Polk Smith, Herrera’s paintings were the subject of few exhibitions – until a large-scale survey at Ikon Gallery, Birmingham in 2009 – a story familiar to many women artists of her generation, emerging during the post-war years. For Joseph, a self taught artist moving from advertising, his has been a more consistent career, yet one characterised by a similarly serious attention to the potential of abstraction within tightly defined constraints. Both artists’ careers ran parallel to the generation of minimal artists such as Agnes Martin, Robert Ryman and Brice Marden but at the time neither received the attention that the quality of their work deserved.

Herrera’s life has been cosmopolitan; her practice reflects this international background. Her work is characterised with reference to the lineage of modernist abstraction and in particular Latin American antecedents, non-representational concrete painting, thus establishing cross-cultural dialogue within this international tradition. The journey of Herrera’s enduring commitment to abstraction can be traced from a kind of romanticism that informed her work of the 1940s, through to a shift made in 1950. Subsequently she has consistently refined her focus on space and colour, paint characteristically applied in flat, solid areas. Works are organised based on the harmony and tension of opposing chromatic planes, combining symmetry and asymmetry as a means to give structure to the surface. Reducing her work to the play between two colours, Herrera creates an experience of sophisticated intensity.  Works such as Cerulean with Lemon Yellow (1984) and Blue with Orange (1984) have a precision and optical rhythm achieved through the most economic of means.

At the heart of Herrera’s work is a striking formal simplicity and attention to colour. Devoid of any referential aspects, her paintings combine line, form and space to convey an intense physicality.  Returning to Cuba from Paris around 1935, Herrera studied architecture. Seen here, paintings such as Black and White (1987) reveal the influence of this discipline whereby the white zigzag dissolves into the gallery environment. The physical limits of the canvas are thus extended to leave black shapes floating in space. This piece relates especially to Escorial (1974) a painting suggested in part by the floor plan of the Royal Palace of the Escorial in Madrid, the torture gridiron of St. Lawrence or the chiaroscuro of Zurbarán, but also to a series of earlier works titled Blanco y Verde. Made throughout the late 1950s and early 1960s here green triangular forms ‘dance’ across walls, their white ground combining with that of the actual gallery architecture. For both artists a sense of rationality or order reigns.

While sharing a deliberation on the possibilities that arise out of such propositions there are crucial differences between the artists. For Joseph a similar vision can initially be seen in his work of the 1960s with common interest in self-imposed structures and parameters, colour and geometry. However by the early 1970s paintings had evolved into variations of a single format — a rectangle of a flatly painted colour surrounded by a border of a different, darker hue – to convey introspective moods through the precise meeting of light and dark, the juncture of two colours in a particular proportional relationship. These smaller, more private and meditative works, coincided with his increasing interest in poetry, philosophy and music. More recently there has been a shift toward an increasing improvisation, seen here most clearly in a sequence of studies from 2010 where blocks of acrylic on canvas are collaged on to paper. They create a sense of freedom which exists outside of the perceived restrictions of their geometry. The broken surface of these works share much with recent paintings, the subtle juxtaposition of forms reveal a complex rhythm akin to a musicality and harmony. Largely centred on a vertical subdivision and the nuance established via tonal colour, pieces such as Deep Red Brown and Pink (2010) or Alazarin Red and Dark Ochre (2009) rely on closely related quality of hue; Blue with Lilac and Bright Blue with Warm Grey (both 2008) have their modulated surfaces further complicated by the introduction of a third form via discrete overdrawing or colour respectively. Despite the clear marks of application, use of colour is not gestural; it is much more concerned with the delineation of surface and establishment of tangible planes. There is a sense that abutted shapes are pitched at a point of mutual reliance.

Importantly Joseph’s new works do establish a further kinship to Herrera, that of a shared connection to Barnet Newman. An intuitive painter, Joseph has few contemporary affinities. He intends his work be ‘absorbed’, their formal sensibility creating an emphasis on the actual experience, the temporal nature of viewing, of experiencing over time. Geometry is employed to suggest a spiritual dimension, a unity of surface that develops as a personal meditation. Joseph credits Newman and Rothko with evoking a kind of emotional space in their work; for Herrera her direct association with Newman, a neighbour and close personal friend, resulted in an intense dialogue regarding the very nature of abstraction itself. 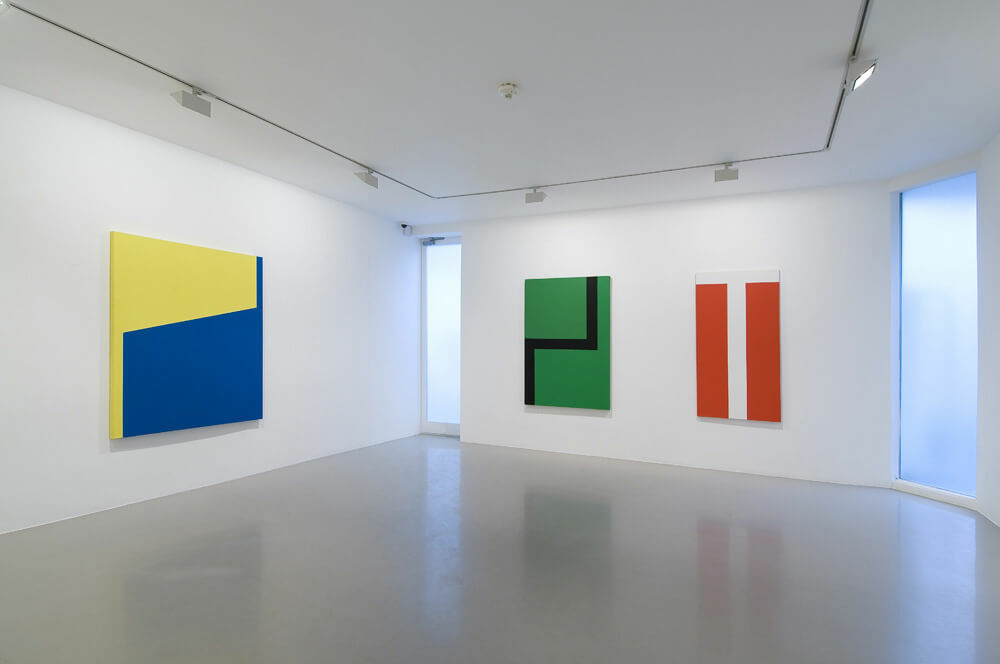 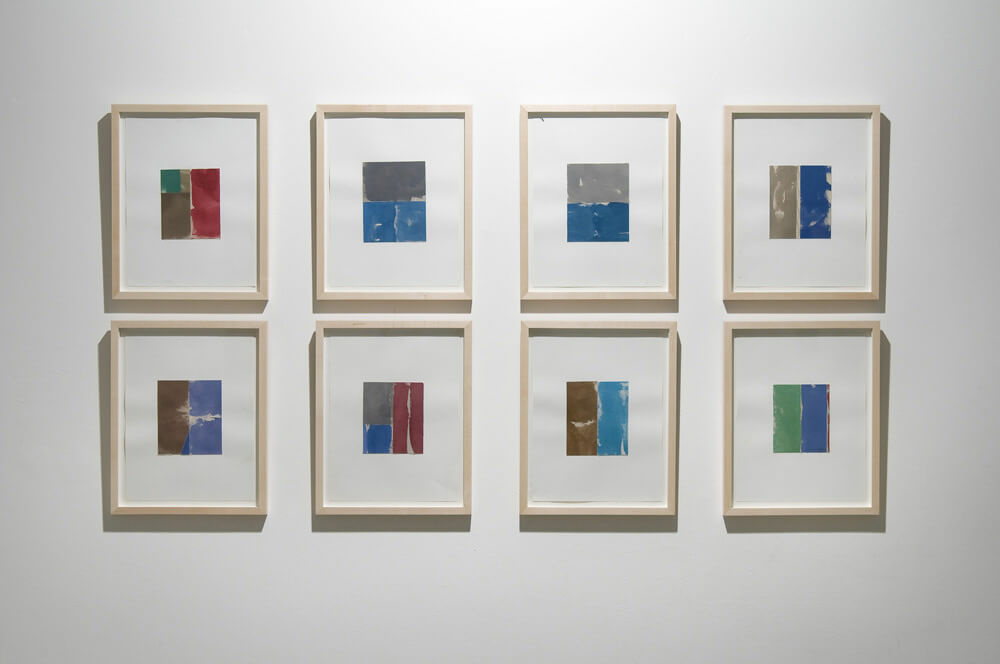 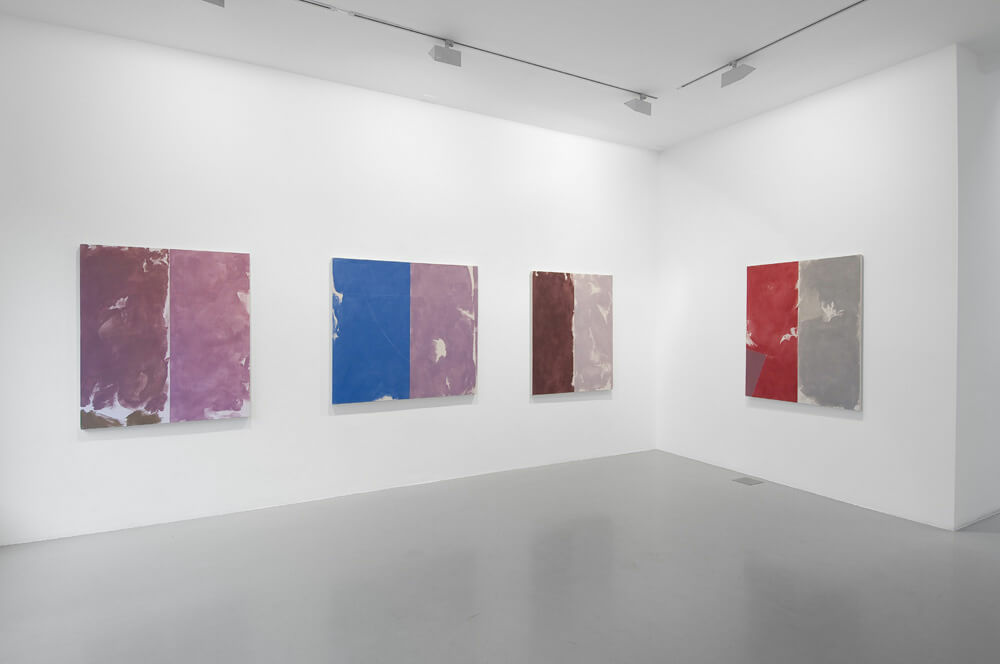 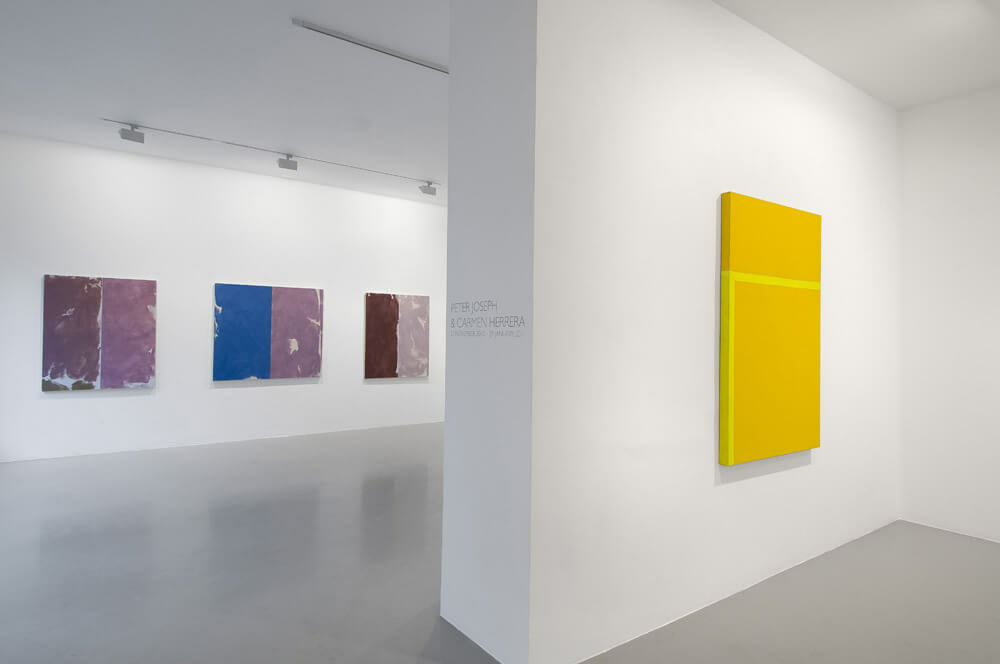