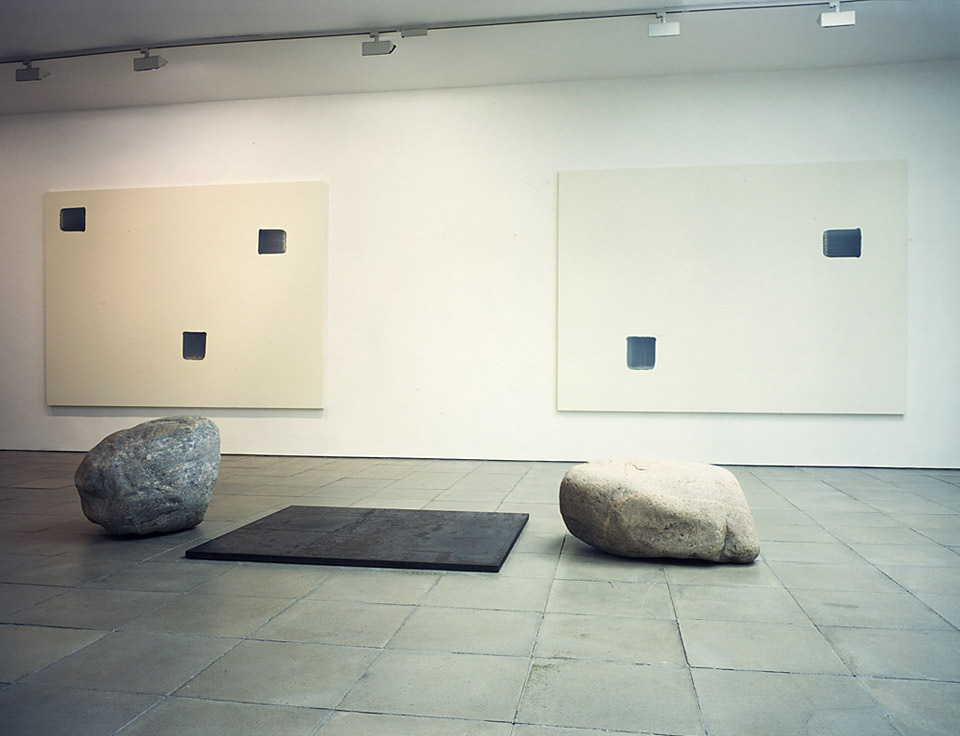 “It is difficult to say what is perfect or what is balanced, but the movement of vision in relation to similarity and difference is endless”
- Lee Ufan

Born in Kyongsangnamdo, South Korea in 1936, Lee Ufan is internationally regarded as the most significant Asian artist of his generation. From his first solo exhibition in Japan in 1967, he went on to participate in Documenta VI (1977) in Kassel, and in 1969 and 1973 represented Korea in the São Paulo Biennal. This will be his second one-person exhibition in Britain.

Painter, sculptor, writer and philosopher Lee Ufan came to prominence in the late 1960’s as one of the major theoretical and practical proponents of the avant garde Mono-ha (Object School) group. Japan’s first contemporary art movement to gain international recognition, the Mono-ha school of thought rejected Western notions of representation instead focusing on the relationships of materials and perceptions rather than on expression or intervention. Its definitive goal was to embrace the world at large and encourage the fluid coexistence of numerous beings, concepts and experiences.

In this new body of work Ufan continues his most minimalist series, Correspondence, that he began in 1993. By mixing crushed stone into the pigment, he creates a dense opacity giving the paintings an evermore mysterious, meditative and illusive dimension. Where the brush first makes its considered and deliberate contact, the paint is thick forming a ‘ridge’, becoming lighter as the brush continues across the canvas. Rarely does his brush touch the surface more than three times and it is often what is not ‘stated’ on the canvas that most shrouds these works in mystery.

In his sculptural work, Ufan “deals with how objects of contrasting natural and industrial material function in an exhibition or given space.” Using common materials such as iron and rocks, Ufan:

“attempts to create mutual relations, spatial movement, duality and a double-reading of the dematerialization of material, identity and difference, staticity and fluidity, function and counterfunction, and construction and deconstruction”.

In both his sculpture and painting, Lee Ufan gives the impression of unpremeditated simplicity creating an atmosphere of what he calls “the art of emptiness”. In order to fully appreciate the “poetry and truth” of Ufan’s oeuvre it is necessary to try to bare one’s senses and remove oneself from the realm of everyday awareness.

Lee Ufan lives and works in Japan, Korea and France and is represented in major museum collections including: MoMa, New York; Centre Georges Pompidou, Paris; Kroller-Müller Museum, Otterlo Holland; the National Museums of Modern Art in Tokyo, Kyoto and Osaka. In 1997 he had a solo exhibition at the Jeu de Paume, Paris and in 2001 the Kunstmueum, Bonn held a major retrospective of his work, and The Japan Art Association awarded him the Ho-Am Prize in the Arts and the Praemium Imperiale in Painting.

To coincide with this exhibition, Lisson Gallery are pleased to be publishing the first comprehensive English-language translation of Lee Ufan’s writings.