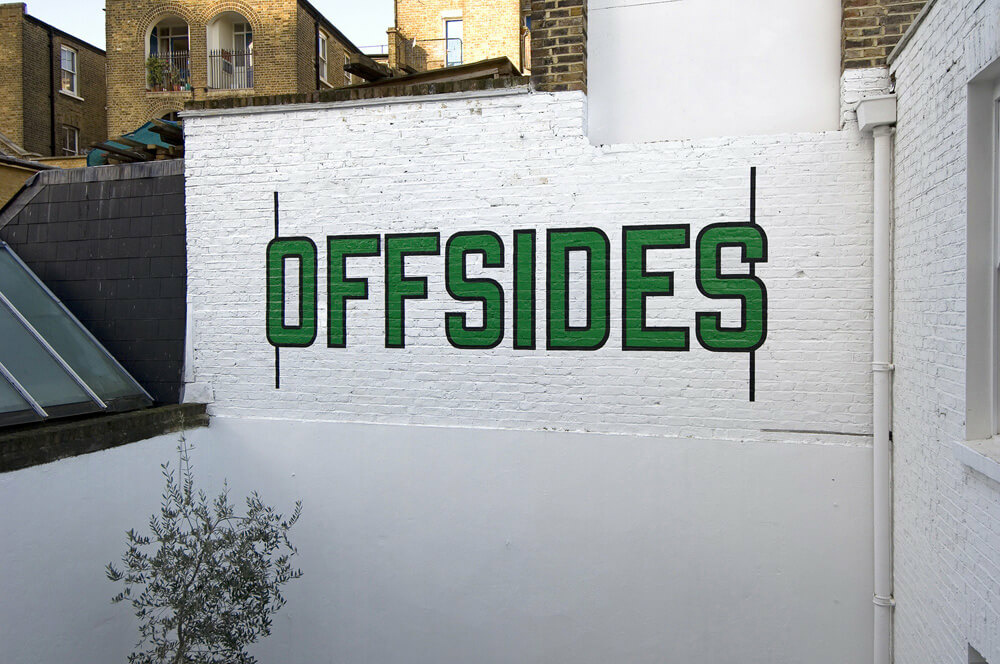 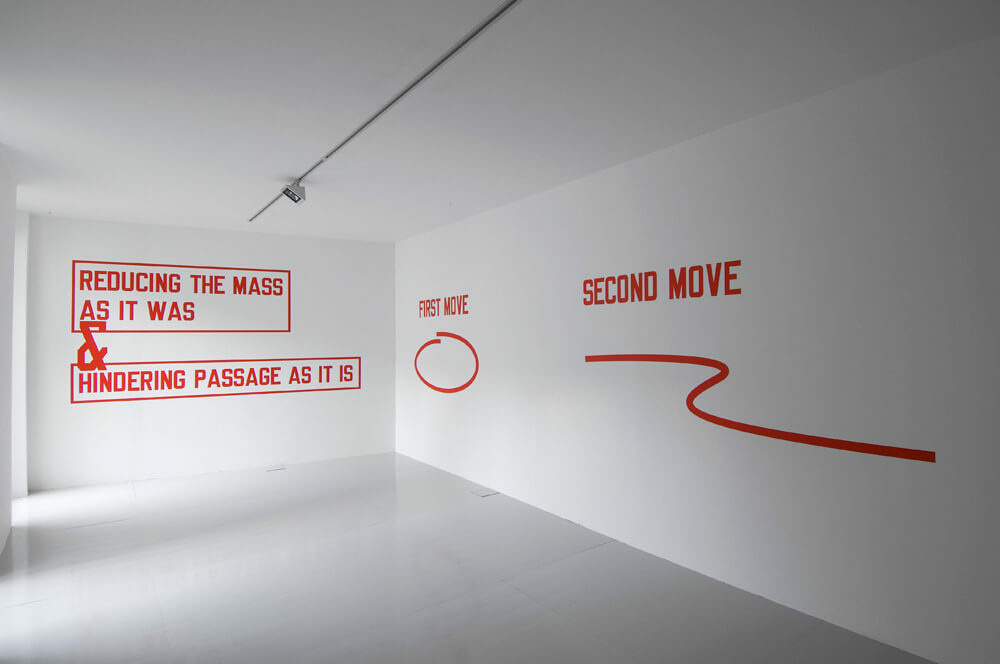 THAT WHICH IS BROUGHT TO BEAR REDUCING THE MASS AS IT WAS & HINDERING PASSAGE AS IT IS FIRST MOVE SECOND MOVE THIRD MOVE, 2007, 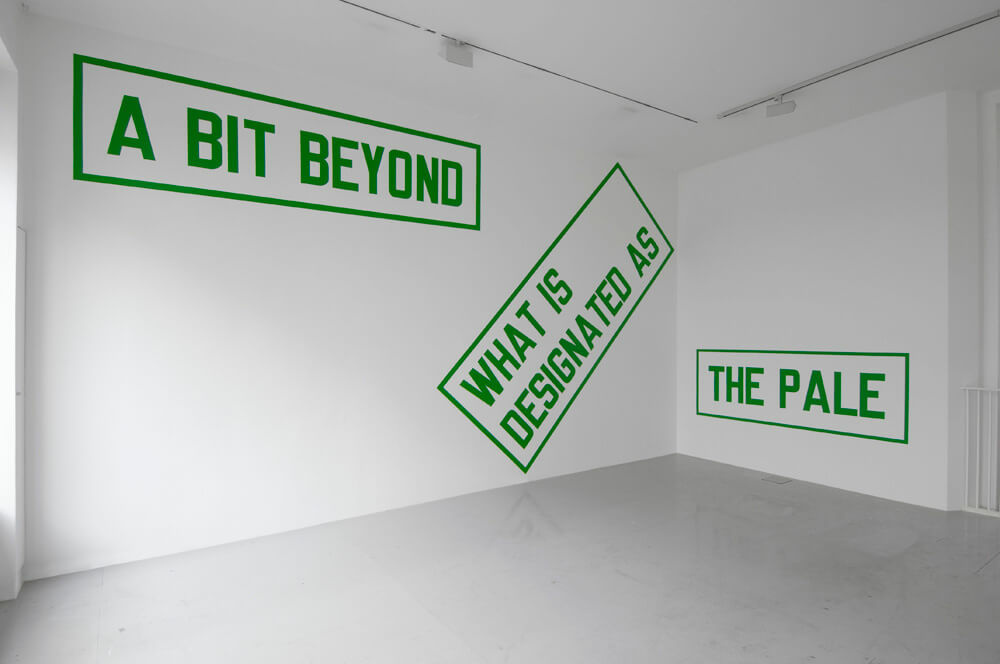 A BIT BEYOND WHAT IS DESIGNATED AS THE PALE, 2007 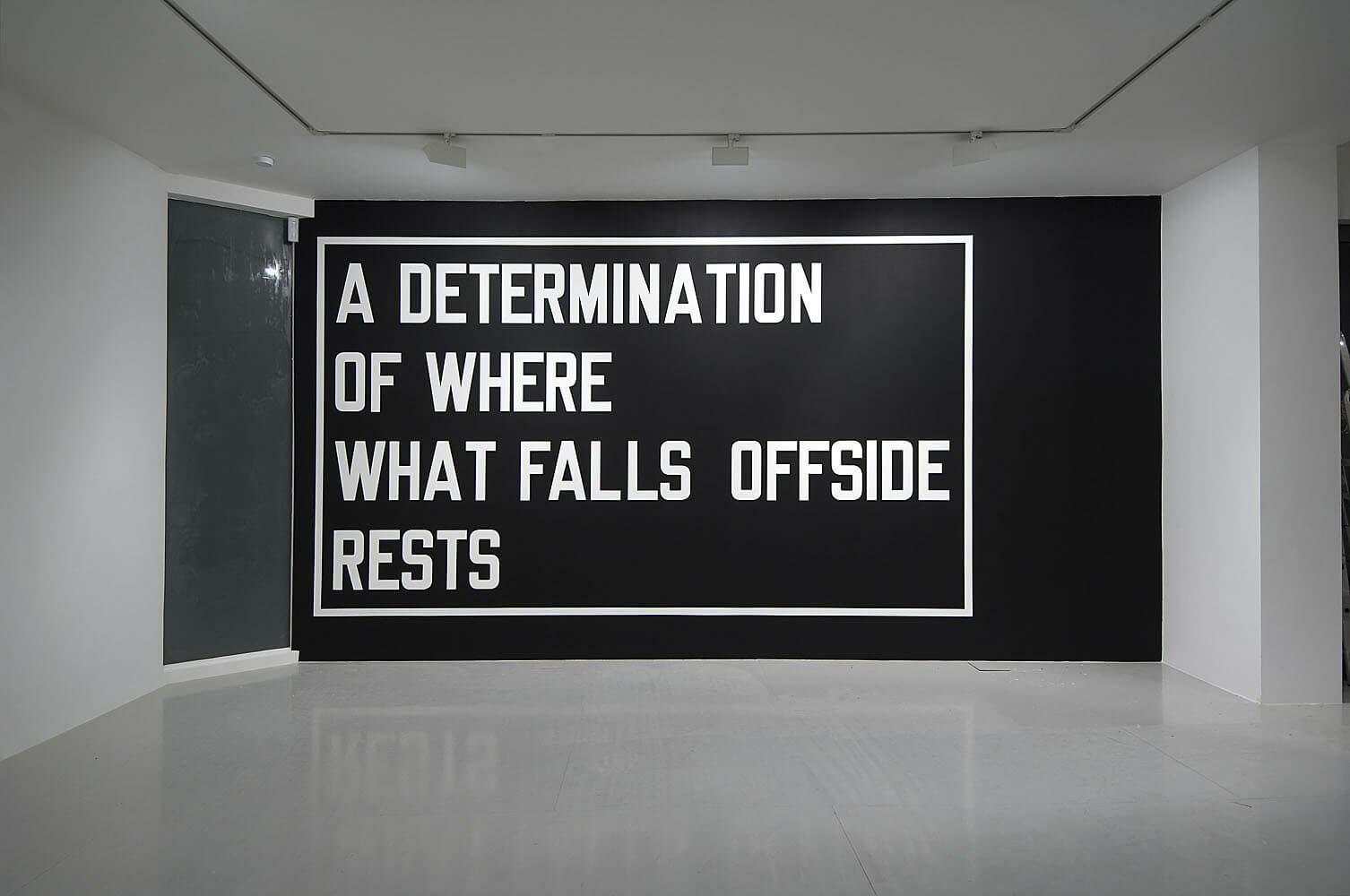 A DETERMINATION OF WHERE WHAT FALLS OFFSIDE RESTS, 2007, 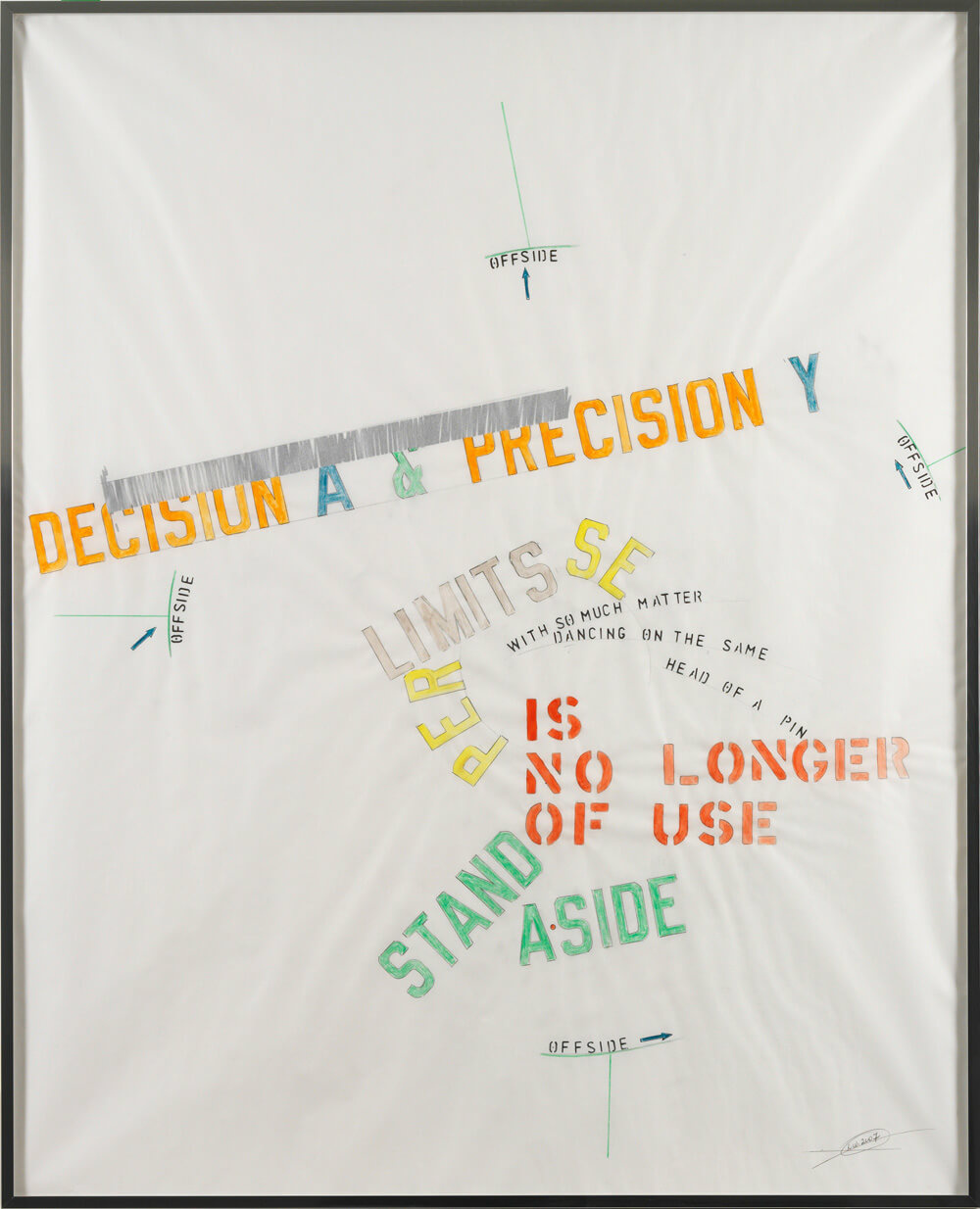 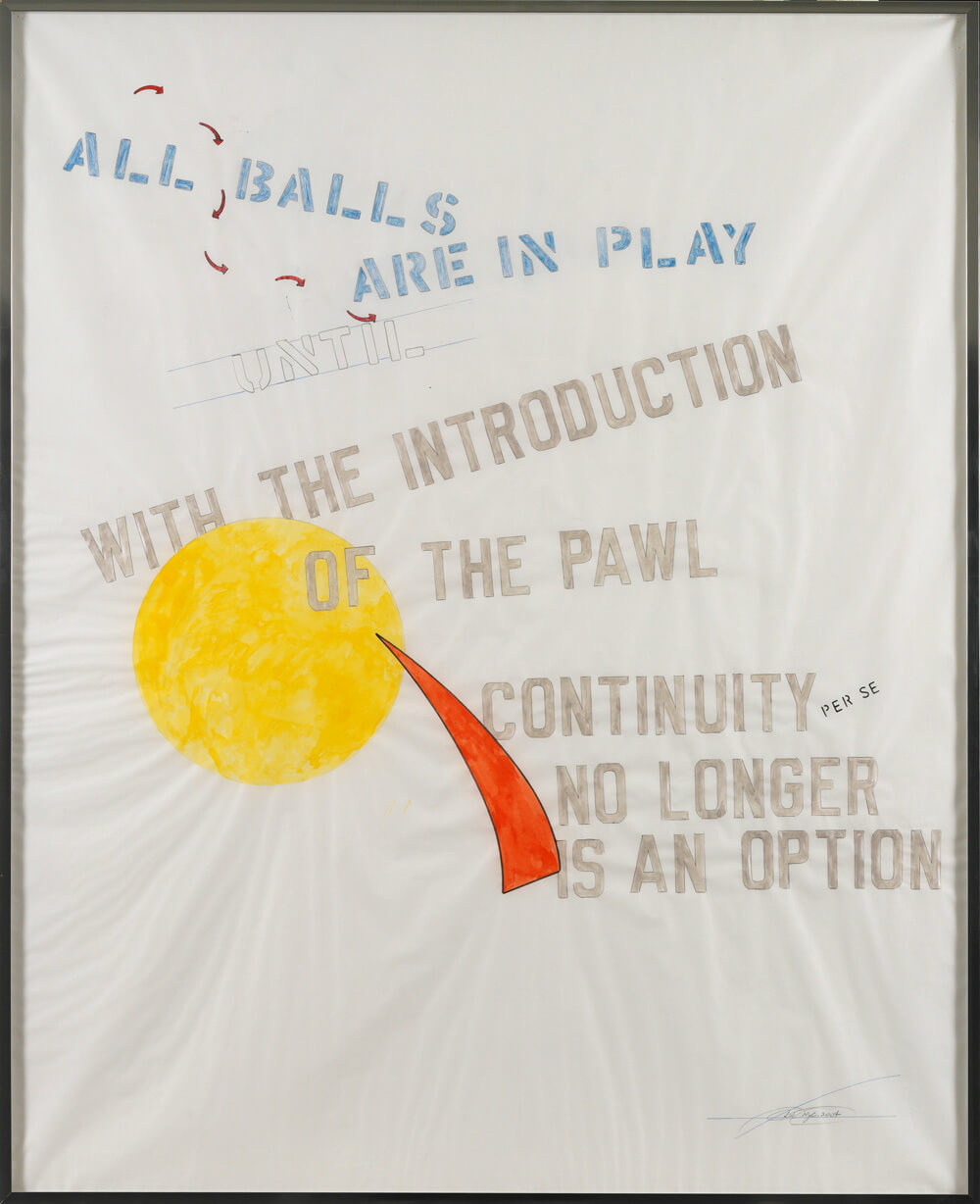 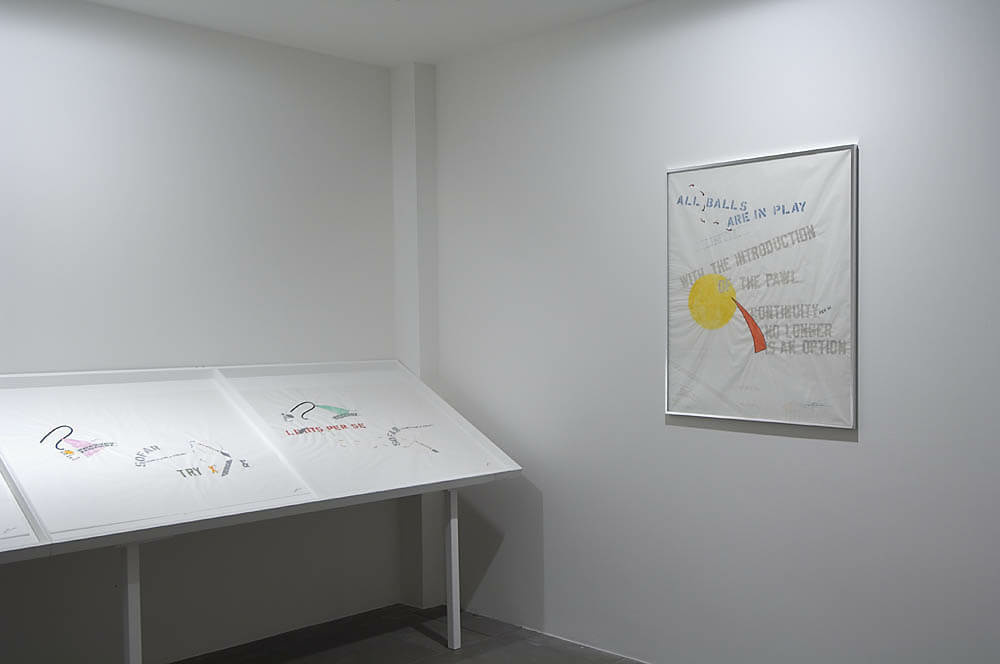 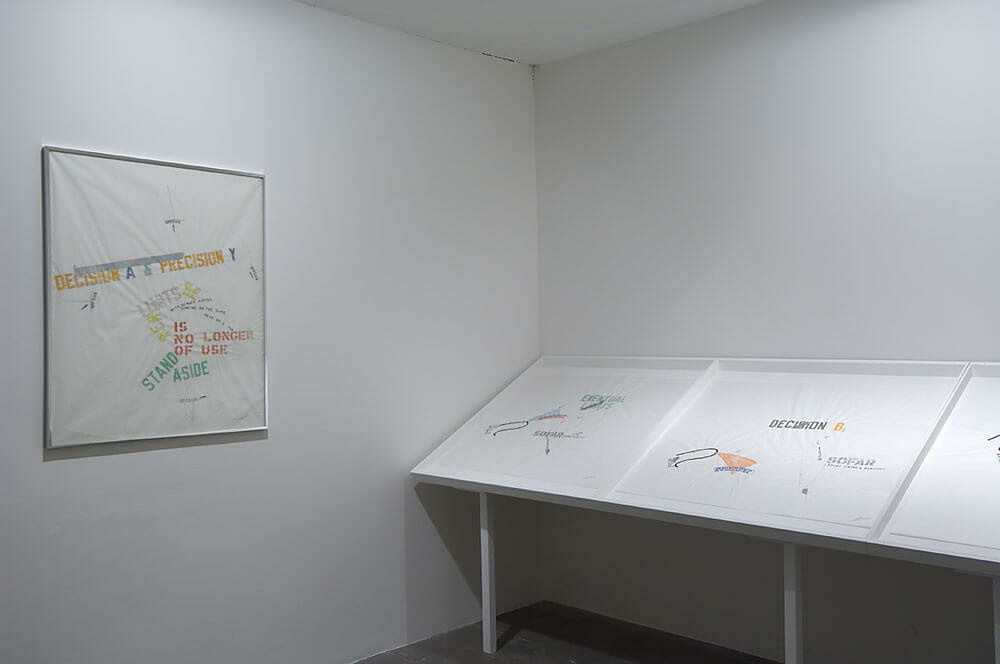 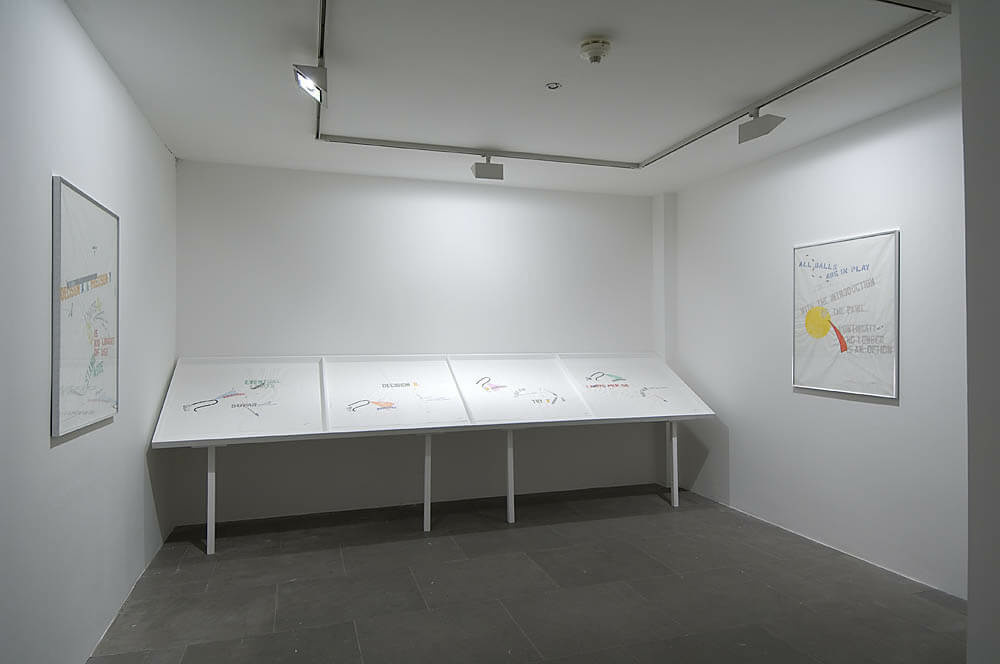 Lisson Gallery is pleased to announce an exhibition of new work by Lawrence Weiner, one of the most significant and influential artists of his generation. This will be Weiner’s second solo show at the Lisson Gallery and will coincide with the artist’s first major US retrospective AS FAR AS THE EYE CAN SEE at the Whitney Museum of American Art, New York, from November 2007 to February 2008, travelling to MOCA, Los Angeles, in spring 2008.

For almost forty years, Weiner has investigated the nature of language and offered a radical redefinition of the relationship between the artist and the viewer. His investigations into linguistic structures and visual systems have resulted in a wide body of work that includes books, films, videos, performances and audio works. Weiner considers language to be a sculptural material and believes that a construction in language can function as a sculpture, just like more traditional fabricated objects.

Lawrence Weiner was born in 1942 in New York and currently lives between Amsterdam and New York. Weiner was involved in seminal shows of the 1960s including an exhibition organised by Seth Siegelaub at Windham College, Vermont in 1968; Primary Structures in 1966 at the Jewish Museum, New York and When Attitudes become form in 1969 at Kunsthalle, Bern.

Weiner’s career has seen many important solo exhibitions including WITH THE PASSAGE OF TIME, Hirshhorn Museum and Sculpture Garden (1990); DISPLACEMENT, DIA Center for the Arts (1991-2); QUELQUES CHOSES, Musée d’Art Contemporarin, Bordeaux (1992); CHAINS WRAPPED AROUND ONE THING & ANOTHER BROKEN ONE BY ONE WITH THE PASSAGE OF TIME, San Francisco Museum of Modern Art (1992), Walker Art Center, Minneapolis (1994), Philadelphia Museum of Art (1994); AFTER ALL, Deutsche Guggenheim, Berlin (2000); AS FAR AS THE EYE CAN SEE, Cologne Kunstverein (2000); BENT AND BROKEN SHAFTS OF LIGHT, Kunstmuseum Wolfsburg (2000-1); and INHERENT IN THE RHUMB LINE at the National Maritime Museum, Greenwich (2007). Weiner’s work can be found in major collections worldwide including the Guggenheim and MOMA, New York; MOCA, Los Angeles; Tate Collection, London and Centre Pompidou, Paris.