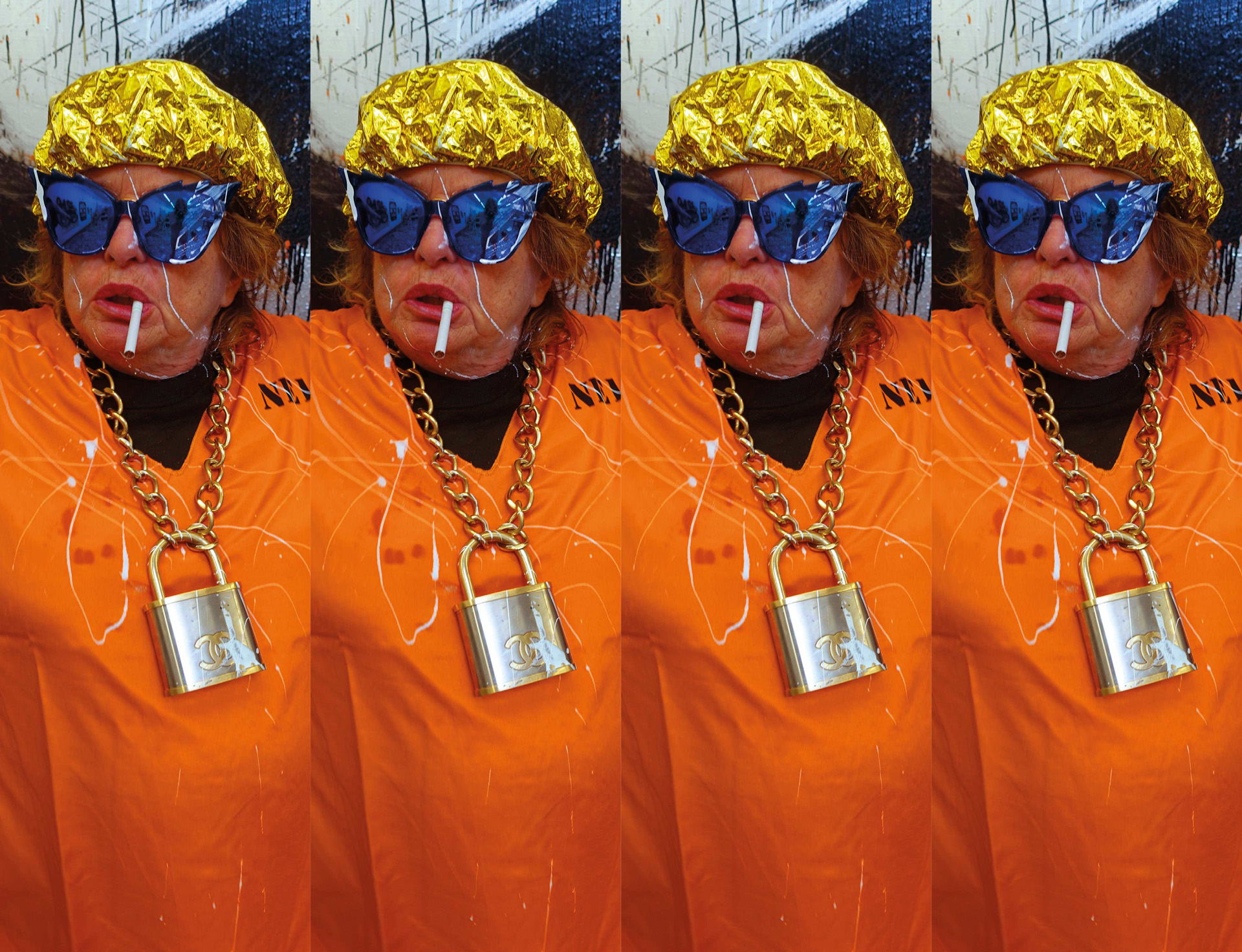 ‘FORGETTABOUT IT’, Joyce Pensato’s second exhibition with Lisson Gallery, features an entirely new body of work, encompassing large-scale paintings, drawings and a site-specific wallpaper installation. The exhibition sees the return of Pensato’s familiar cast of cartoon characters while marking important new developments in the artist’s practice in terms of movement, colour and scale.

An alumna of the New York Studio School in the 1970s, where she was mentored by influential artists including Mercedes Matter and Joan Mitchell, Pensato challenged the school’s strict figurative life drawing practice and painted directly from cardboard cut-outs, dolls and photographs as a replacement for the traditional fruit of still lifes. Her humorous, innovative and critical translation of comic-book imagery, combined with a ferocious application of paint, positions Pensato between the illustrative figuration of Pop Art and the gestural physicality of Abstract Expressionism.

While cartoons and cultural ephemera still provide her with subject matter, the works on display at Lisson Gallery speak more of Pensato’s ongoing experimentation with technique, as well as the positioning and fragmentation of figures. The exhibition features a series of four golden Donald Ducks, seemingly rocking and rolling in motion across the wall, which will be installed next to an over-three-metre-wide painting of Batman’s eyeless cowl, which stares out through the dripped, splashed surface of Pensato’s frenzied and sustained assault on the canvas. Further damage is done to another mask, this time through an obsessive peeling away of successive layers of the industrial-grade enamel paint. This act, which she says represents “an itch you cannot scratch”, mirrors the self-destructive nature of her drawings and suggests the origin of one of Pensato’s own alter-egos, ‘The Eraser’ (she also goes by ‘The Fizz’ and ‘The Godmother’, all the while channelling the spirit and energy of Gena Rowlands as 'Gloria').

Three large-scale drawings in the front space of the gallery continue Pensato’s experimentation with rupture and repair and are also notable for their use of coloured pastels, marking a departure from her characteristic charcoals (with occasional leaps to silver and gold). Drawings are further explored as part of her wallpaper installation, beginning at the bottom of the staircase and exploding across the entire first-floor exhibition space.

The site-specific installation itself provides insight into Pensato’s ways of working and her studio environment in East Williamsburg, Brooklyn. Before painting, Pensato often pins up photographs that she amasses, perhaps out of personal interest (often featuring the likes of Robert De Niro, to whom the exhibition title nods) or of those found at local flea markets or on Ebay, which are subsequently splattered with paint. These collages are then photographed again, or, as in this case, transformed into wallpaper. With small drawings tacked on top, overlaying more portraits of Hollywood stars splashed with enamel, the installation, seemingly raw and spontaneous yet carefully configured, aims to engulf and overwhelm the viewer, thus drawing visitors not only into the idiosyncratic world of the artist but also the confusion and chaos of contemporary society. 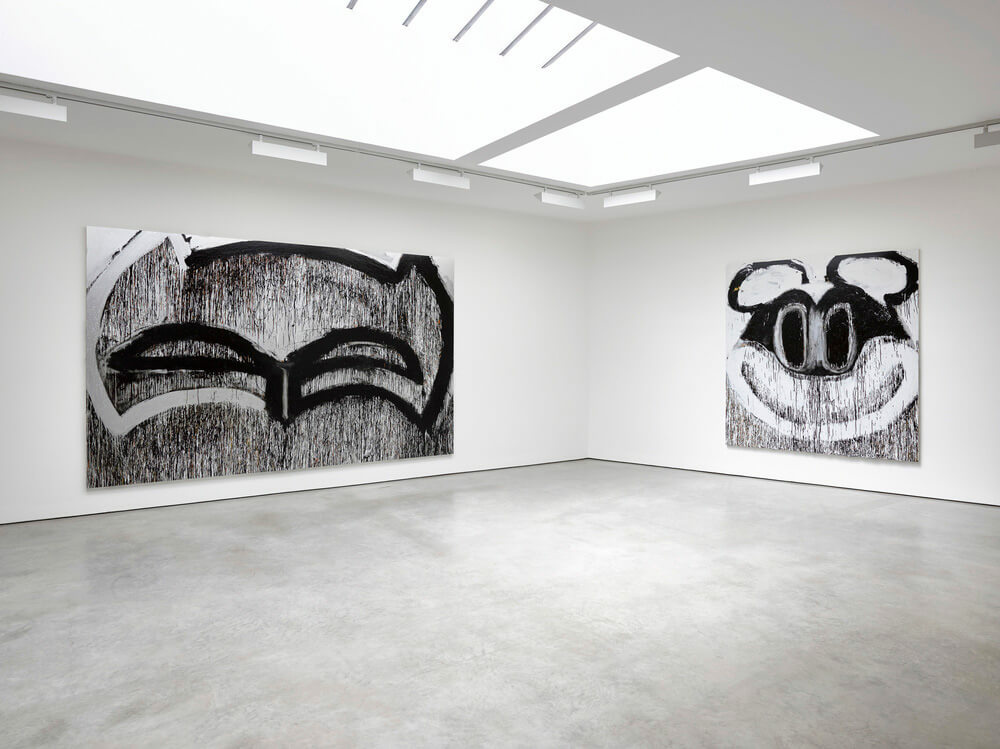 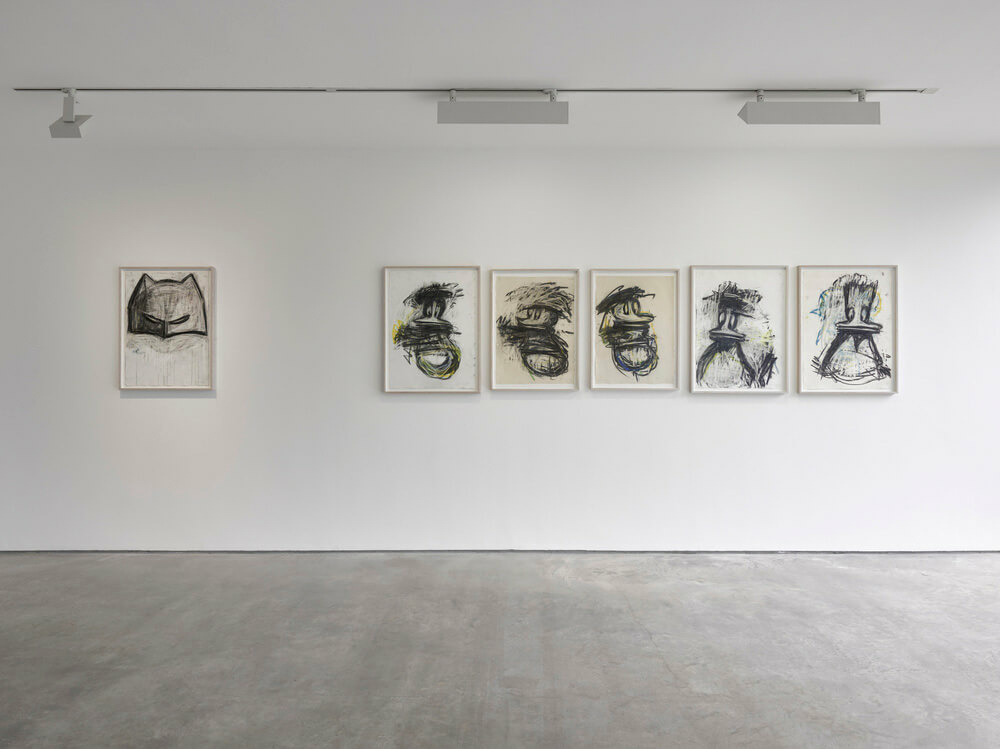 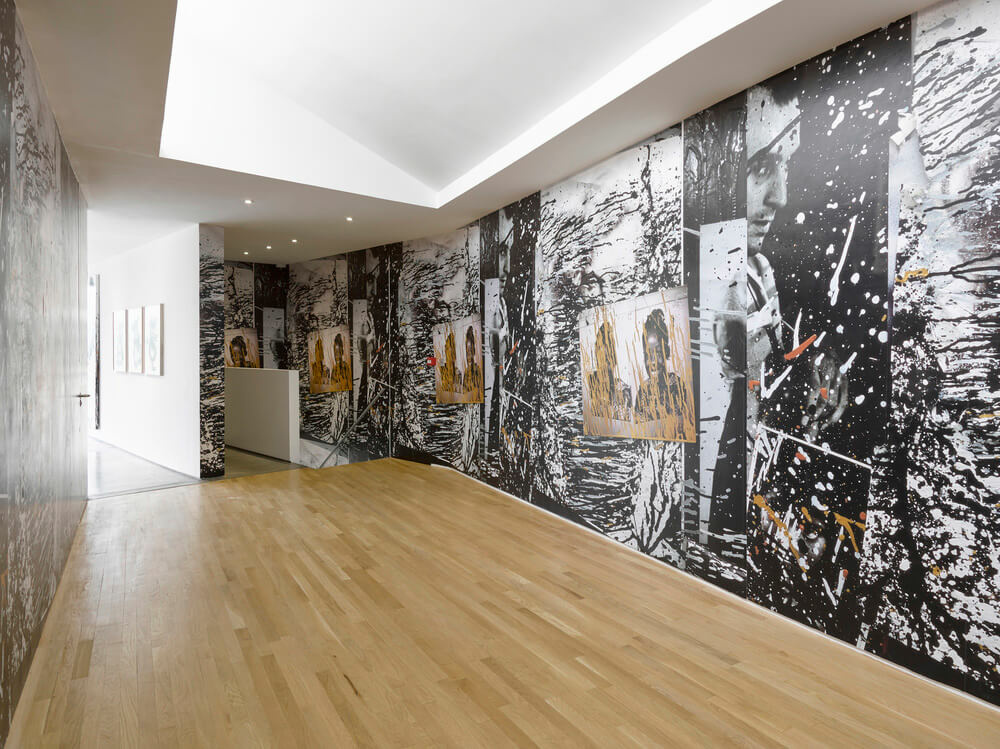 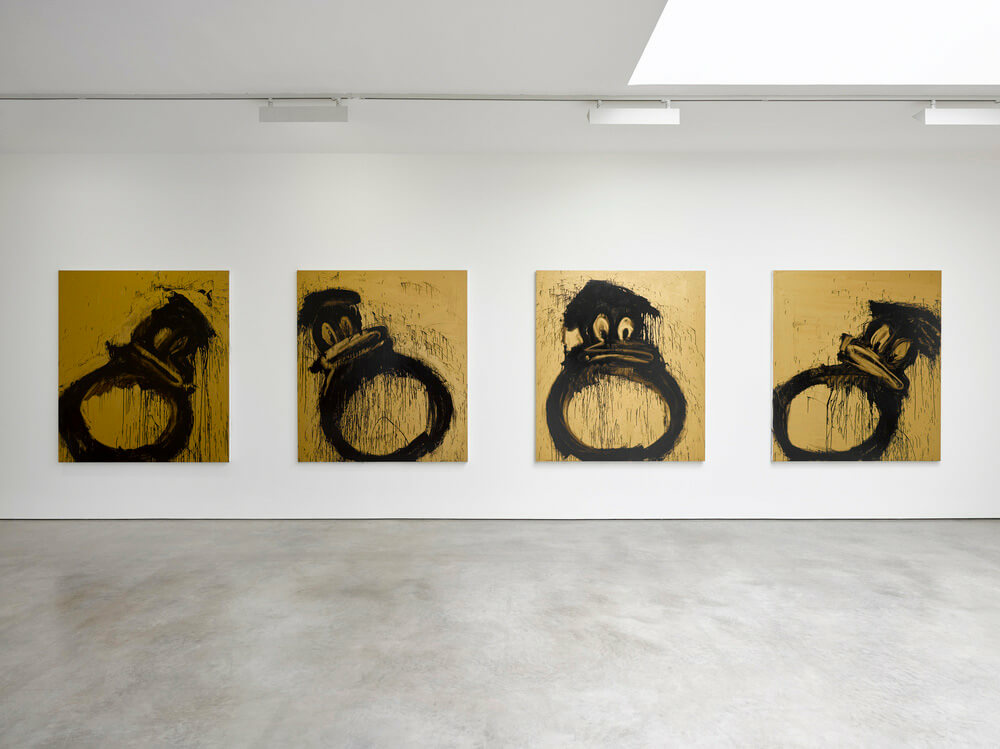 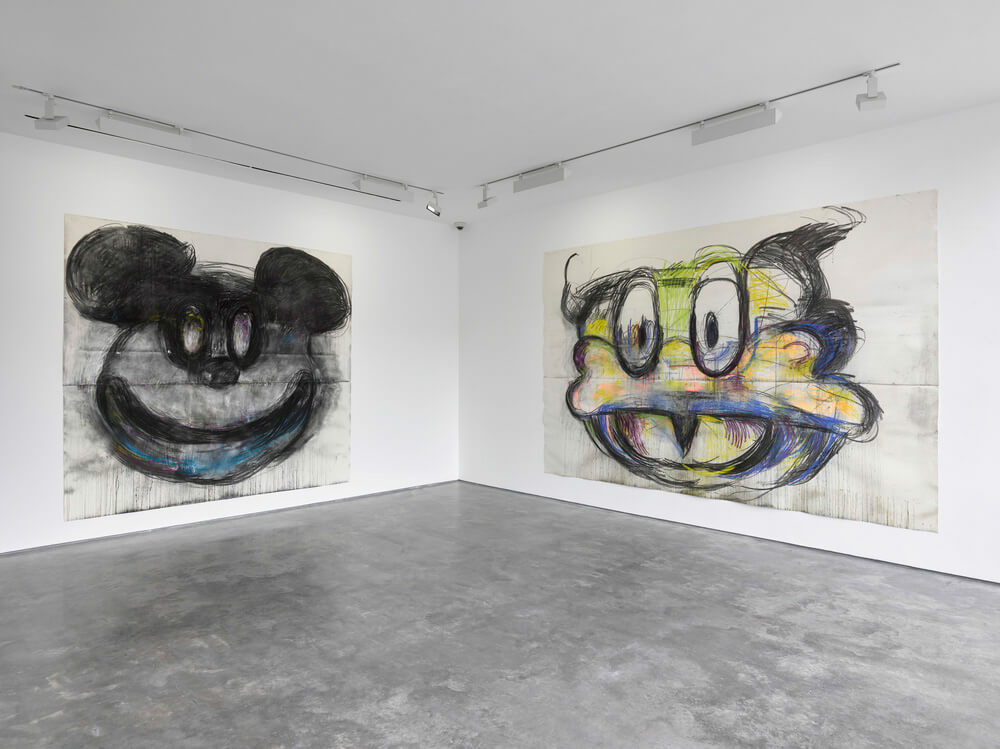 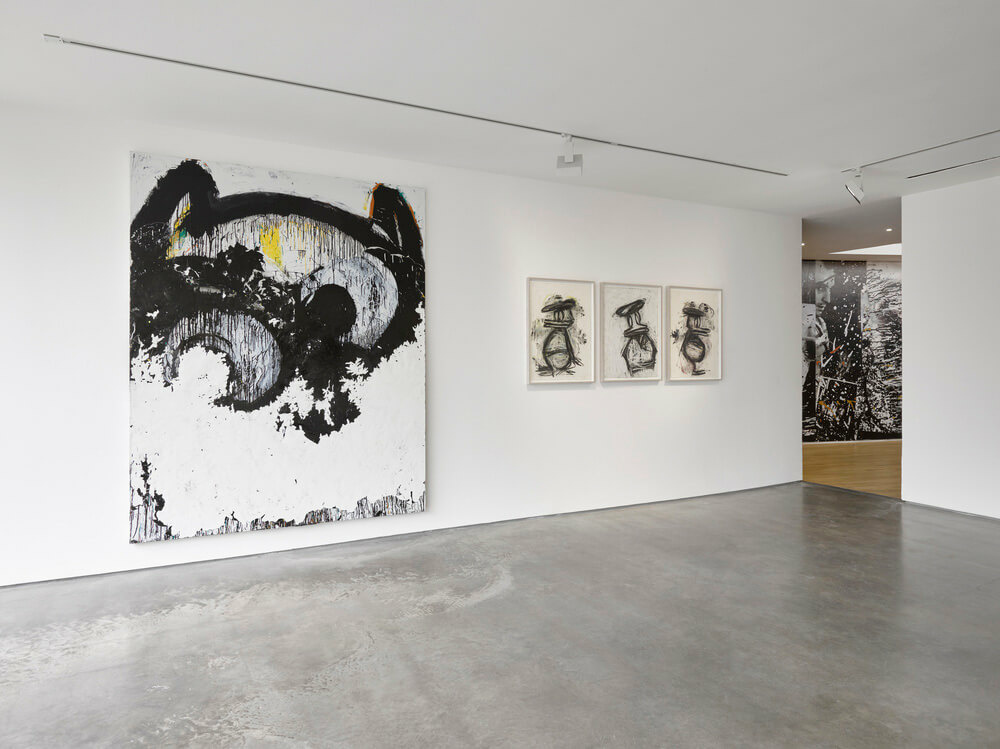 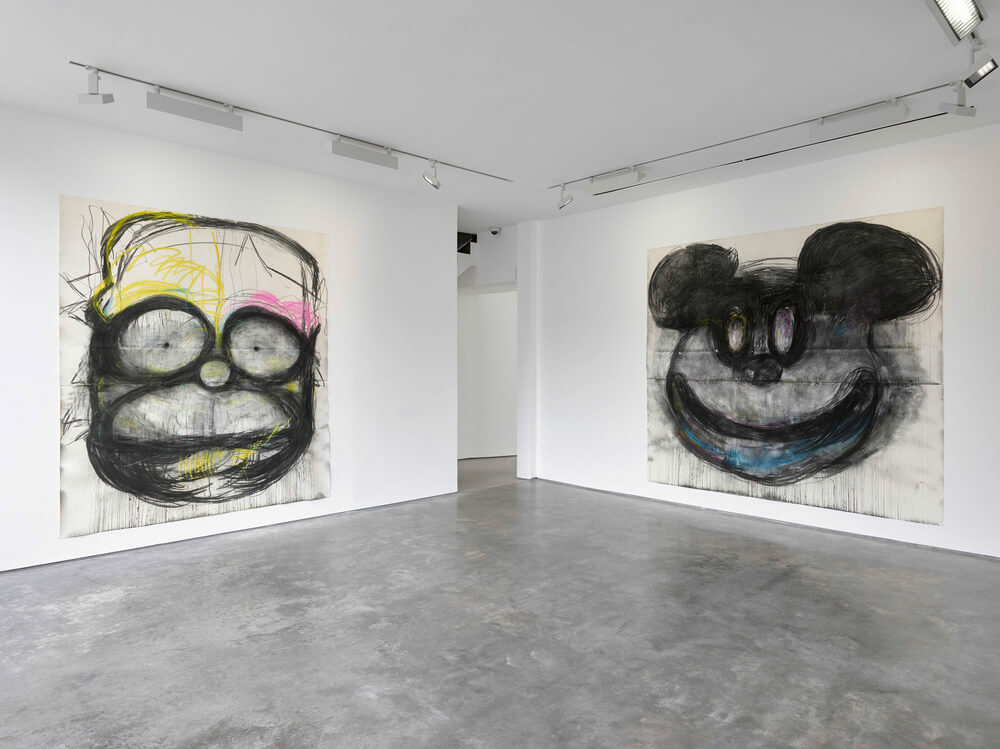 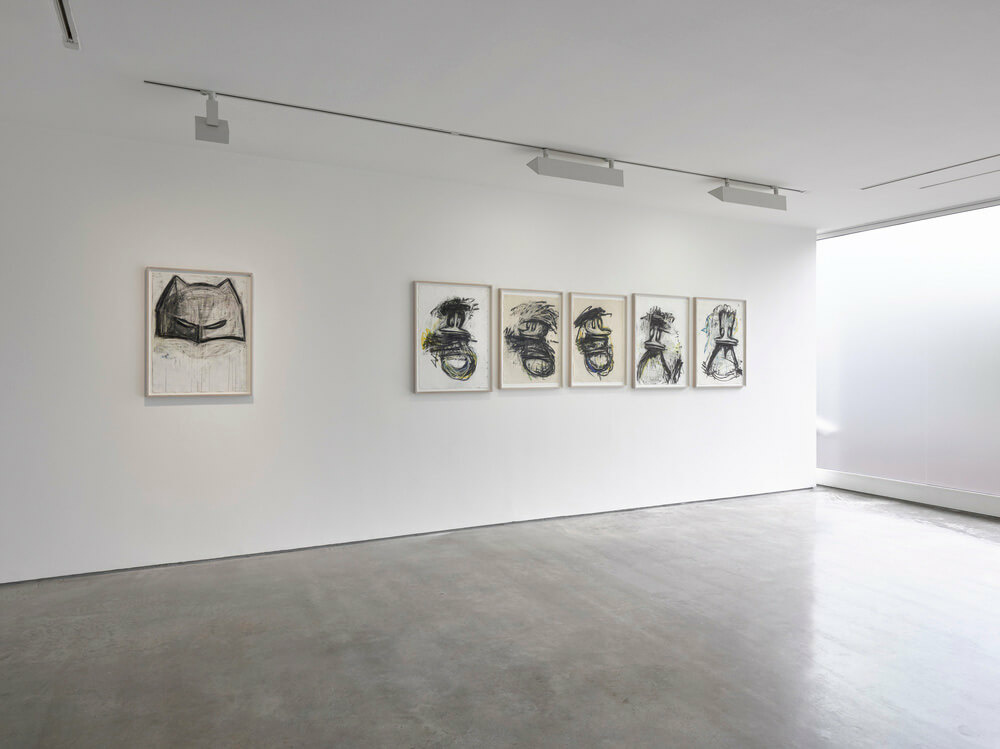