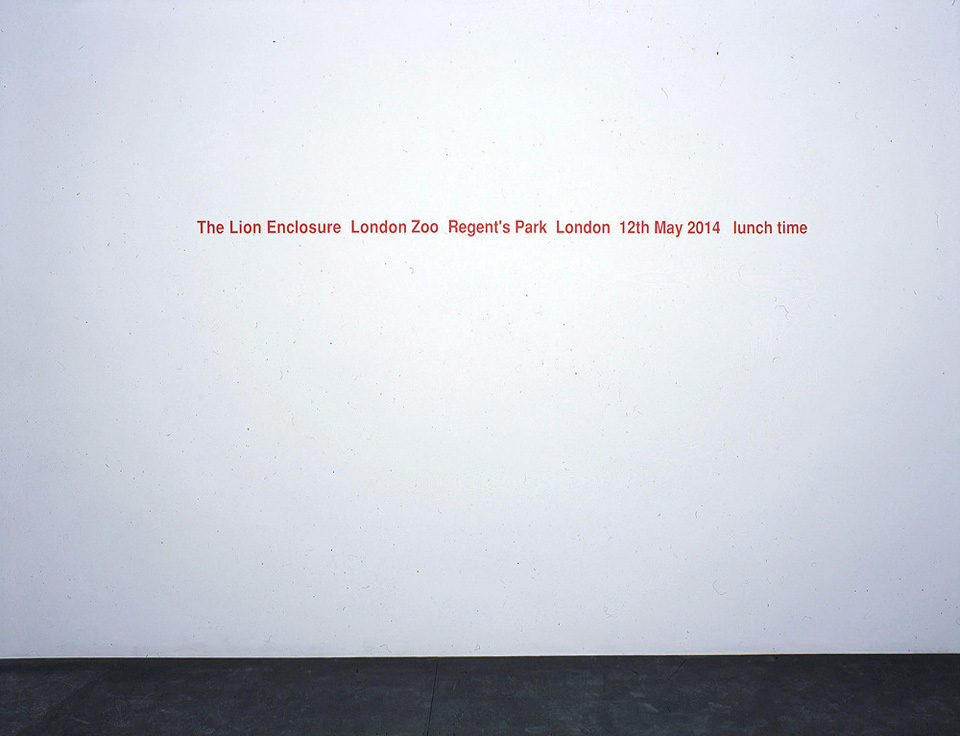 Born in Leicester, England in 1969, but now based in Berlin, Jonathan Monk’s work includes a wide range of media including installations, photography, film, sculpture and performance. His tongue-in-cheek methods often recall procedural approaches typical of 1960’s Conceptualism, but without sharing their utopian ideals and notions of artistic genius. Instead, Monk grounds his conceptual approach in more commonplace concerns, that of personal history, his family, even pets, whilst still alluding to the types of systems and processes that artists such as Sol LeWitt employed so rigorously. While much of his work is gently playful and tinged with nostalgia for the late 1960’s, it also challenges the idea of purity in modern art, demystifying the creative process and suggesting alternative models for how art and the role of the artist can be interpreted.

The exhibitions will be made up of several projections, either using slides or video, many of which deal with time. In Big Ben Piece, slides of postcards of the famous monument will be shown in the gallery at the time displayed on the postcard. Today is just a copy of yesterday, a slide projection, shows an image of an exhibition of work by Sol LeWitt, which took place at Lisson Gallery in 1972. The carousel moves round only once a day but should you see all the slides, you would notice the deterioration of the image, an effect caused by making slide duplicates from duplicates. Finally the image of the gallery becomes bathed in a kind of sentimental haze and it is virtually unrecognisable. Lisson Gallery was one of the first places in Europe to show the work of Monk’s mainly American artistic heroes, and it is therefore entirely appropriate that he should not only use the gallery in his work, but also exhibit his work in the gallery.

Jonathan Monk deals with the future as well as the past. In Meeting # 76, vinyl text on the wall denotes a place, date and time that suggests a future meeting point, without confirming whom he will be meeting. Will the artist turn up? How can he be recognised if he does? The meetings could be romantic or sinister in intent, but of course we have no way of knowing if they will happen at all. These signs pose many more questions than are answered and the associations we project onto these meetings perhaps tell us more about our current hopes and aspirations than it does about the future.

Also in the exhibition will be two films made from artists’ books. The pages have been used as animation cells, books become cartoons, one page magically turning into the next. The books Monk has chosen to film are by Richard Long and Gilbert & George. By appropriating and reworking art from the past, Monk

comments upon the myths of innovation and originality and undermines the idea of artistic authority. In Lost Days Monk appropriates Lost Day, a flip-book of a film by Gilbert & George, and re-films the book from front to back and then from back to front, thus inverting the process by “returning” the work to it’s original celluloid form.

In All the possible arrangements of five colours, clown makeup obscures a five- member family posed for a snapshot. In each slide, “balloons” are superimposed above the heads of each figure, the colours of which change, while the fixed, exaggerated grins remain the same. Here, Monk plays upon art school colour theory and Conceptualism’s self-referential end-game through the absurd confrontation of festive face painting and abstract colour permutations.

Separated is perhaps the most sentimental work in the exhibition where the artist has taken old photographs of couples and quite literally torn them apart, separating them as couples, as photographs and then finally framing them separately and hanging them in separate spaces. There is a certain sadness implied by the missing figures, leaving one wondering at their jagged demise.

Lisson Gallery is co-publishing a monograph during the exhibition including texts by Matthew Higgs, Hans Ulrich-Obrist and Jens Hoffman. Jonathan currently has a solo exhibition at the Art Gallery of Ontario, Candada and will be exhibiting his work at Grazer Kunstverein, Graz, Austria in early January and Arnolfini, Bristol in the spring of 2003.