Jonathan Monk: Not Me, Me 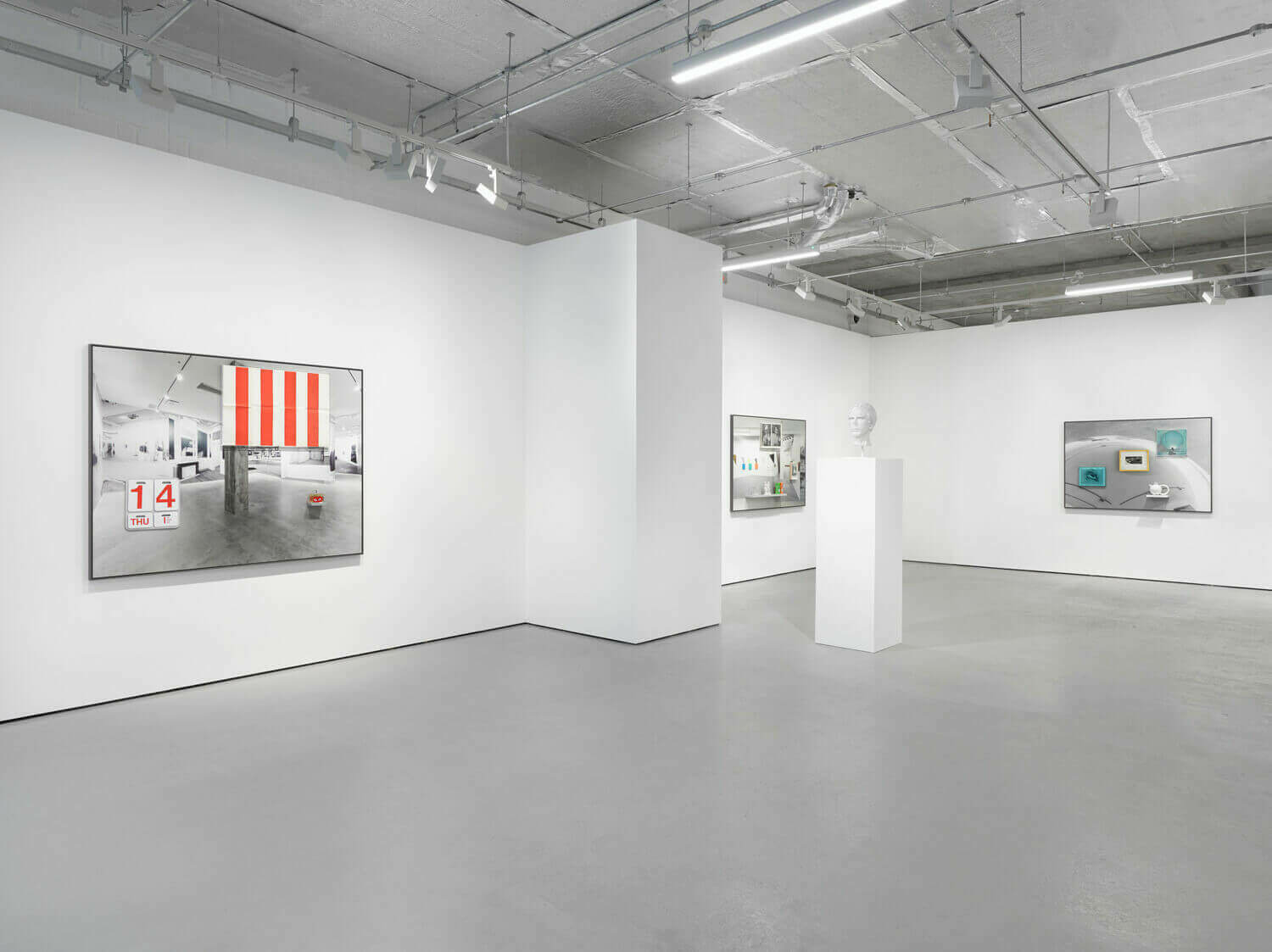 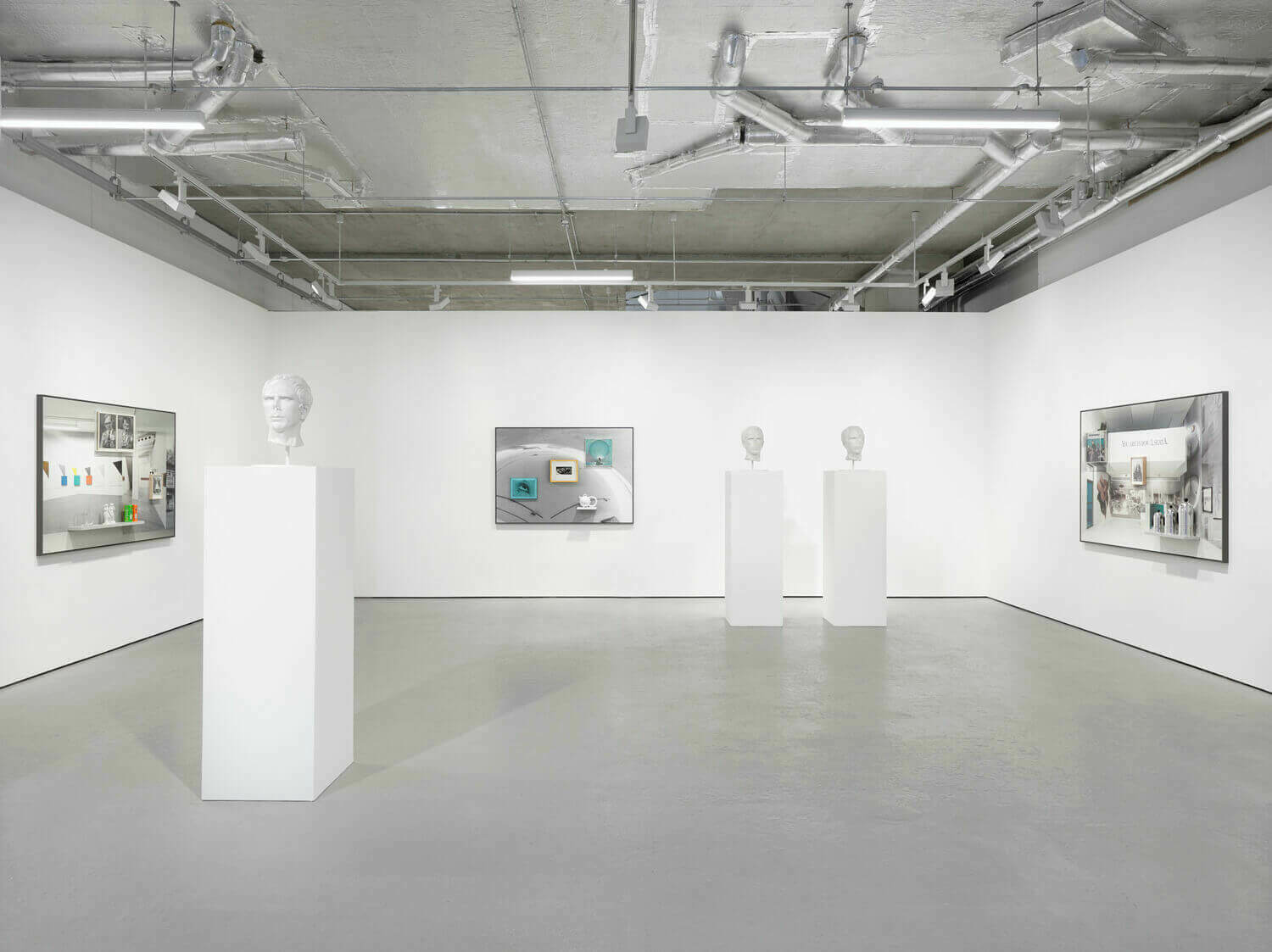 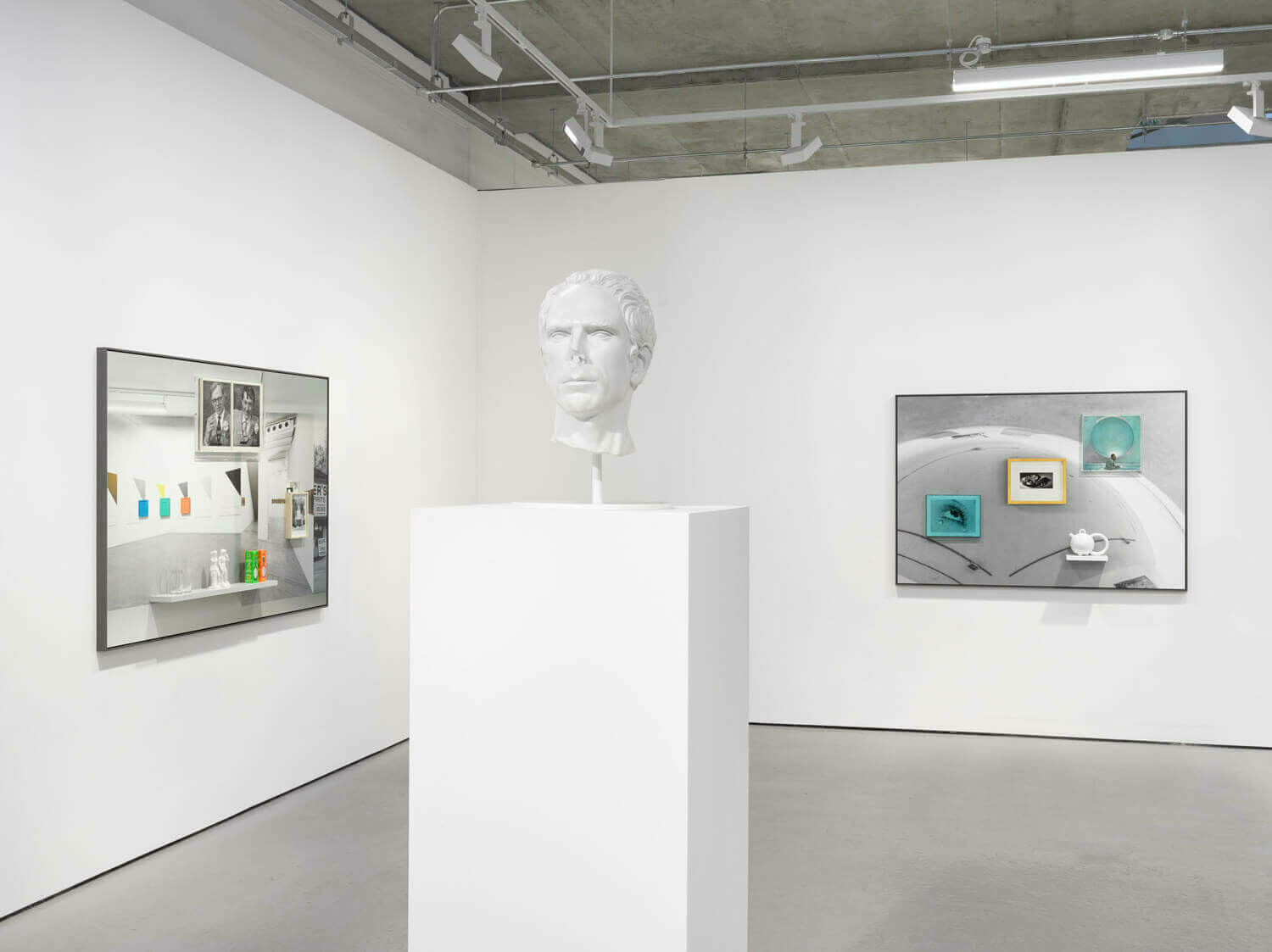 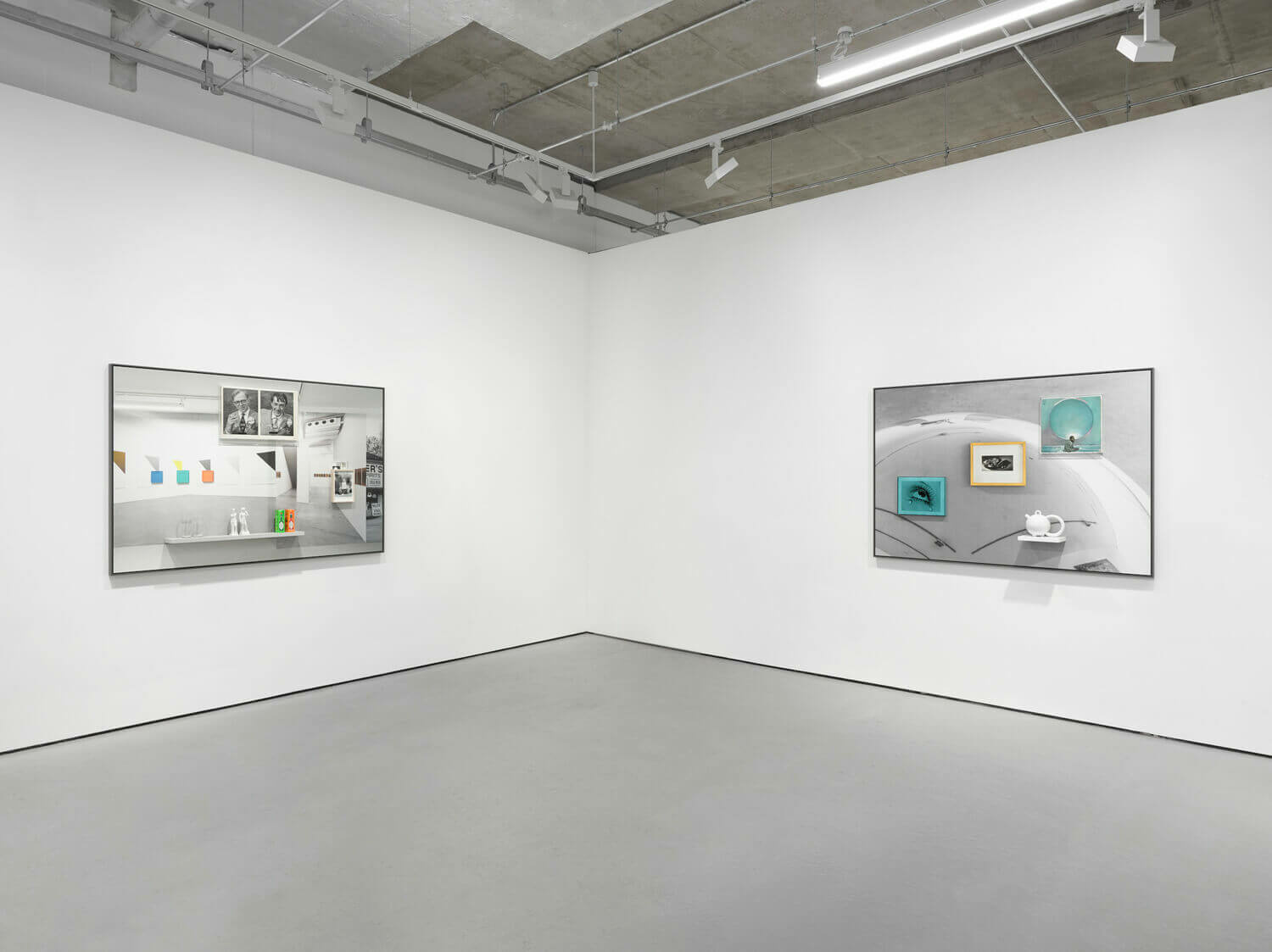 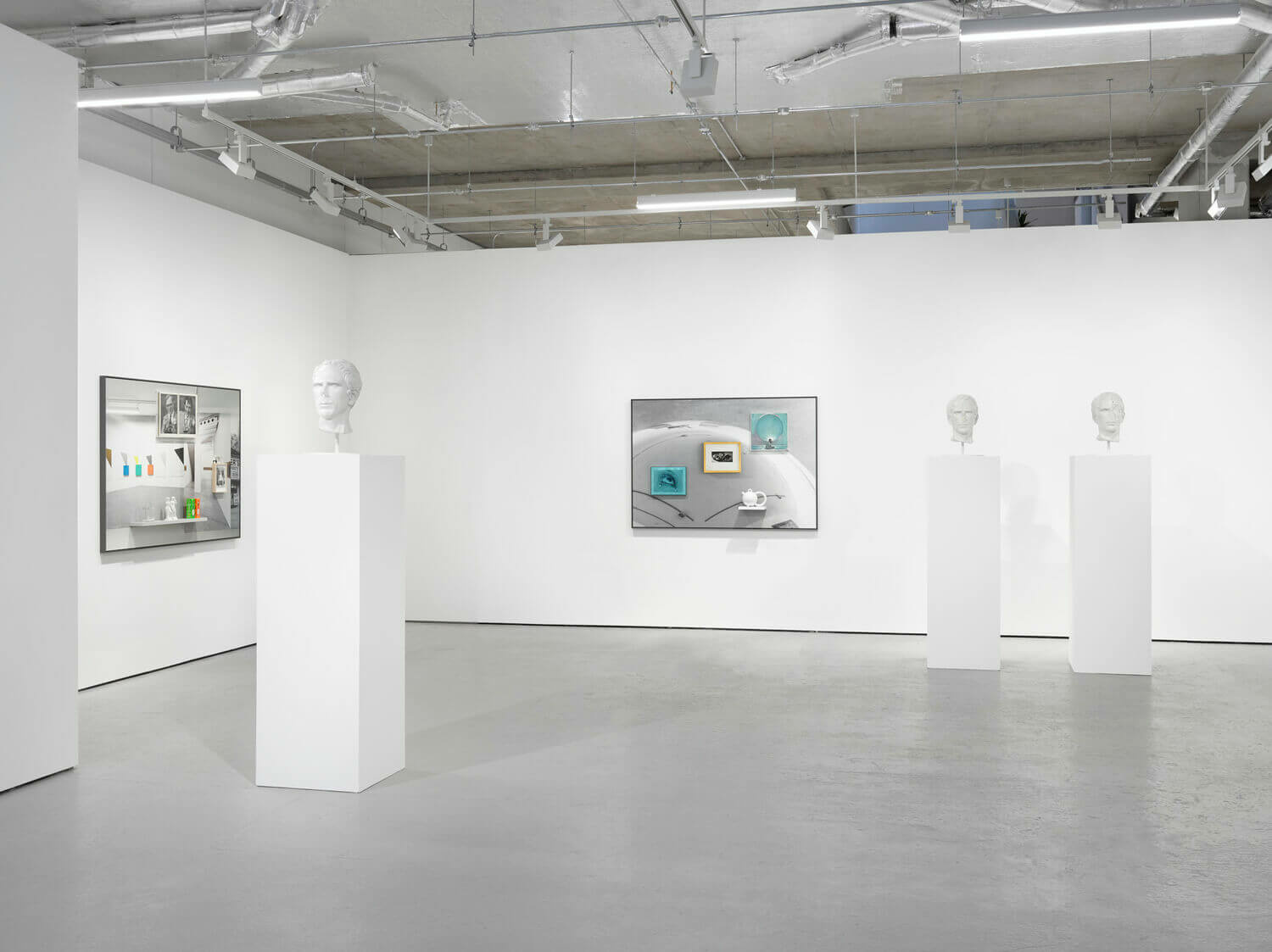 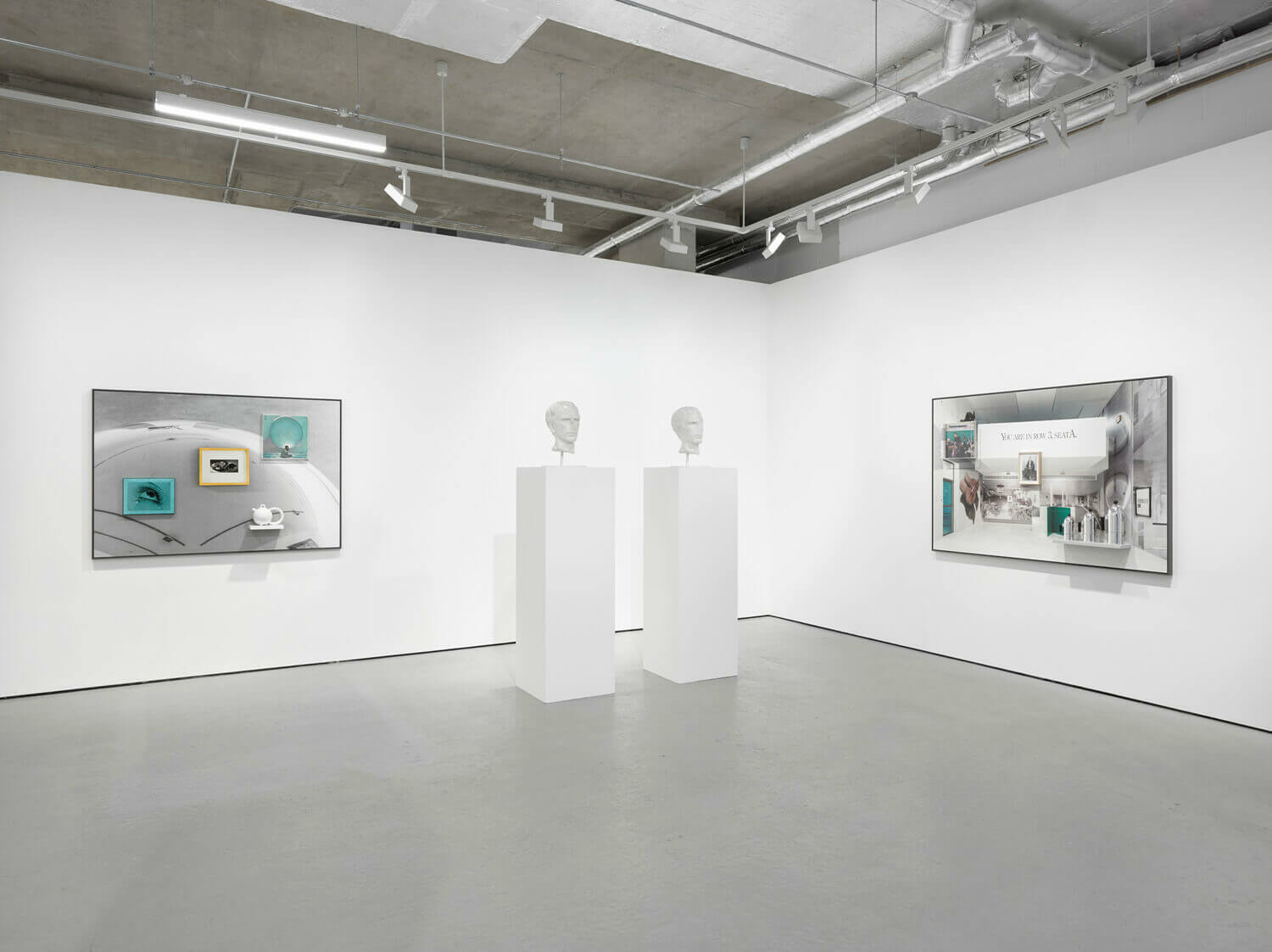 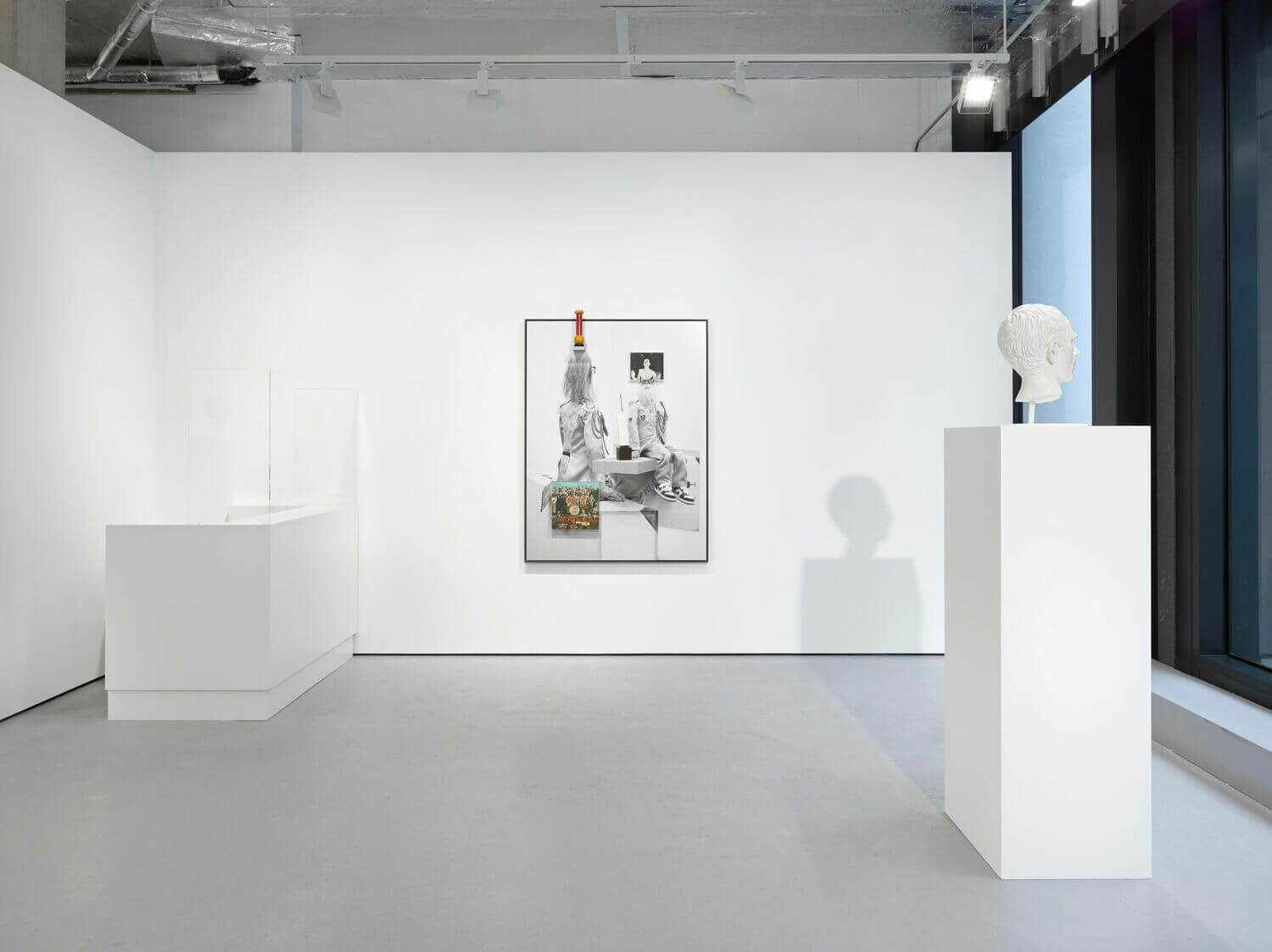 Watch a video of the installation here

Jonathan Monk’s investigations into memory, ephemera and artistic process emerge from his practice as an inveterate observer, participant and collector of both popular culture and conceptual art. In a new series of collages, collectively entitled Exhibit Model Detail with Additional Information, Monk charts and revisits some of his own exhibition history using photographic evidence of previous solo shows, harking back to the first museum presentation featuring wallpaper of his own past work at Kunsthaus Baselland in 2016. Copy and pasted, magpie-like, onto the backdrop of these grisaille, archival documents are various touchstones or influences that went into the depicted display, many of which come from Monk’s own treasure trove of personal or artistic memorabilia. Actual objects – from teapots and vinyl records to cacti – are perched on the picture plane, alongside framed portraits of his artistic heroes, printed invitation cards and individual works of art in their own right.

For example, Exhibit Model Detail with Additional Information III (2020) begins with the wallpaper background of Monk’s Paul McCarthy puppet looking at himself in a mirror while dressed as Paul McCartney, in two-dimensional black and white. Between these doppelgangers hangs an original Martin Kippenberger edition, in the form of a retro phone, while the record sleeve of Sgt Pepper’s Lonely Hearts Club Band is placed below. A portrait of Bruce Nauman spits from one head like a fountain and an Ettore Sottsass pepper grinder protrudes like a crown from the head of the other figure. This accretion of images and ephemera creates a feedback loop of creation, appropriation, homage and irreverence.

Each Exhibit Model reflects a mood, a moment in time and a discrete body of work, albeit without including Monk’s actual art objects in the physical realm, amounting to a kind of ‘anti-retrospective’, as he calls it. There are in fact many shows within this show, each collage also containing Additional Information (also referred to by the Not Me of the show’s title), ranging from internal and personal references to artistic or musical influences, with other artists making cameo appearances, including Daniel Buren, Jeff Koons, Louise Lawler and Gilbert and George.

More of Monk’s artistic forebears are present in this show, through their intervention in a group of sculptural self-portrait busts, entitled Senza Titolo. The otherwise identical Jesmonite effigies of Monk have all had their noses removed in the same iconoclastic manner that damaged Roman statuary of old, only these defacements were all by the hand of Arte Povera artists such as Emilio Prini, Gilberto Zorio and Jannis Kounellis. Even Maurizio Cattelan, a near contemporary of Monk’s was invited to strike the nose off his face with a hammer, as was John Baldessari, one of the many artist-collaborators to have sadly died since this project was completed in 2012. These vandalized heads represent instances of Monk’s work disturbed by the intervention of other artists, while the Exhibit Models strike a less discordant and more-or-less harmonic note when considered in concert with the external forces at play.