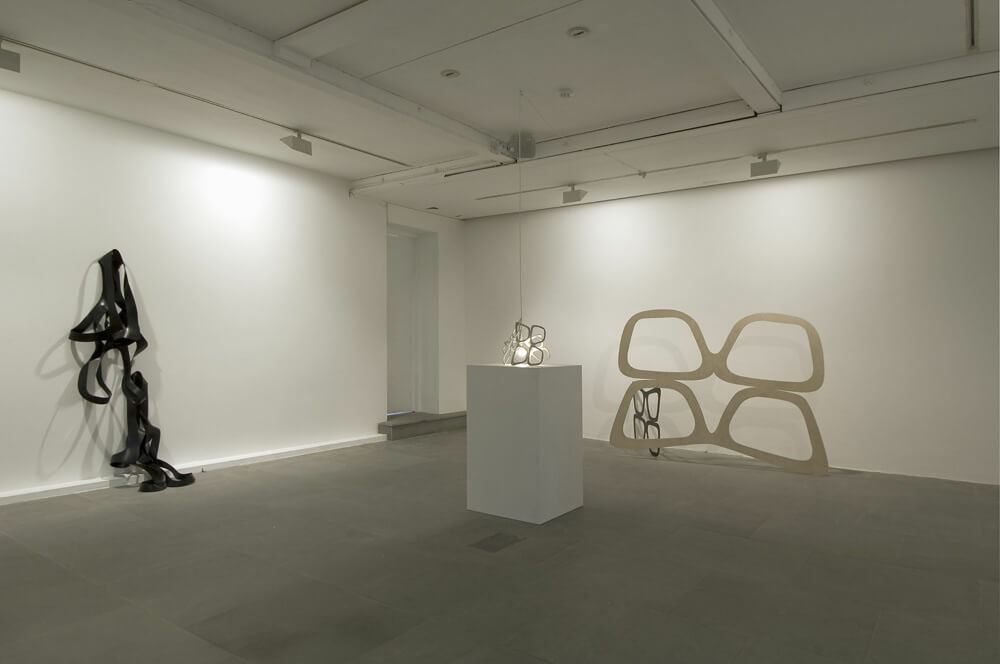 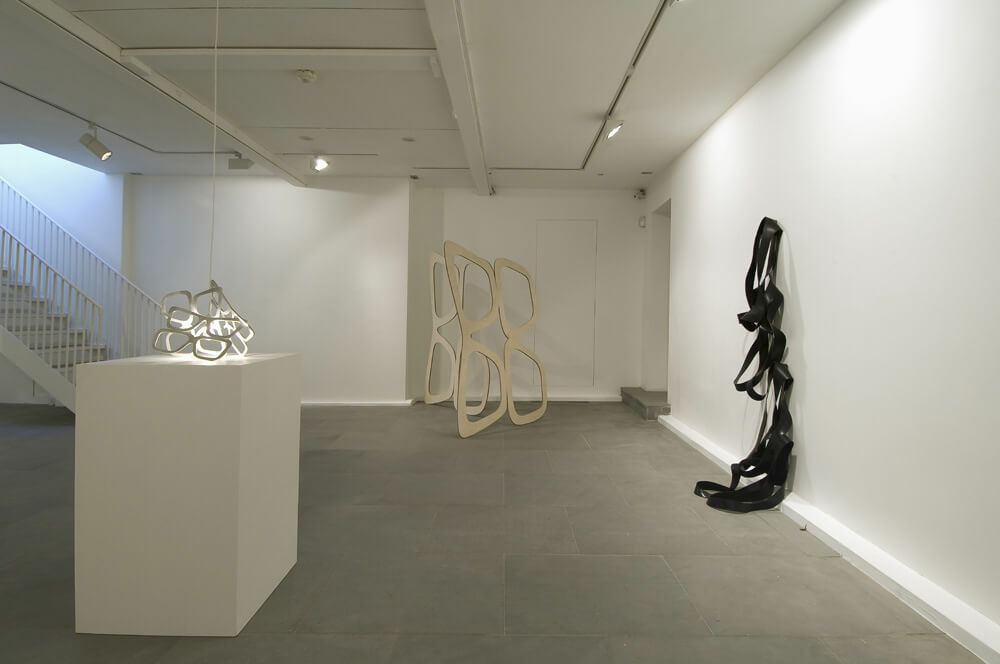 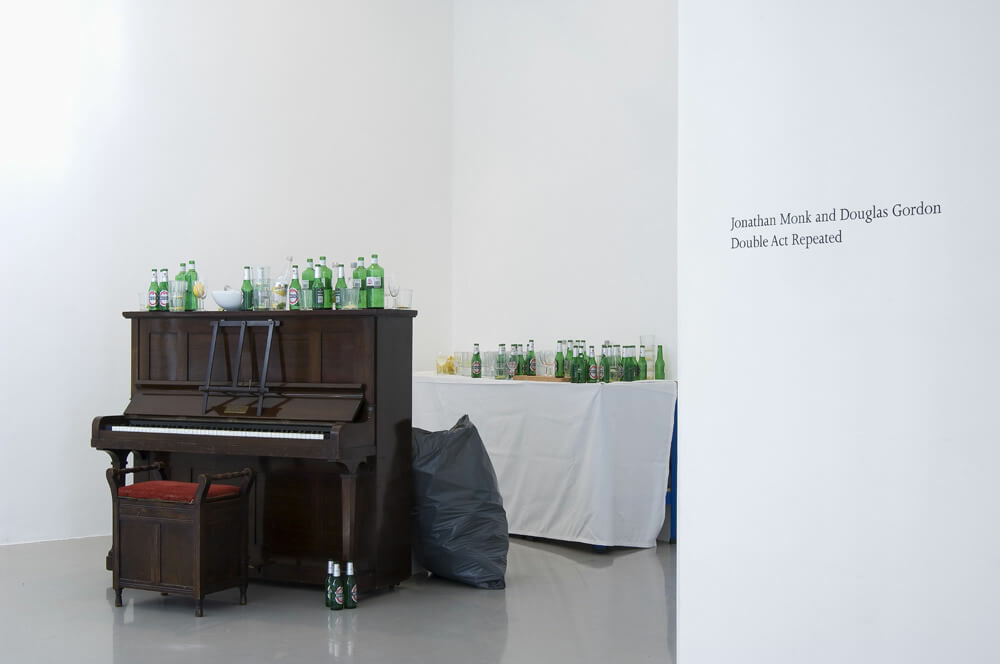 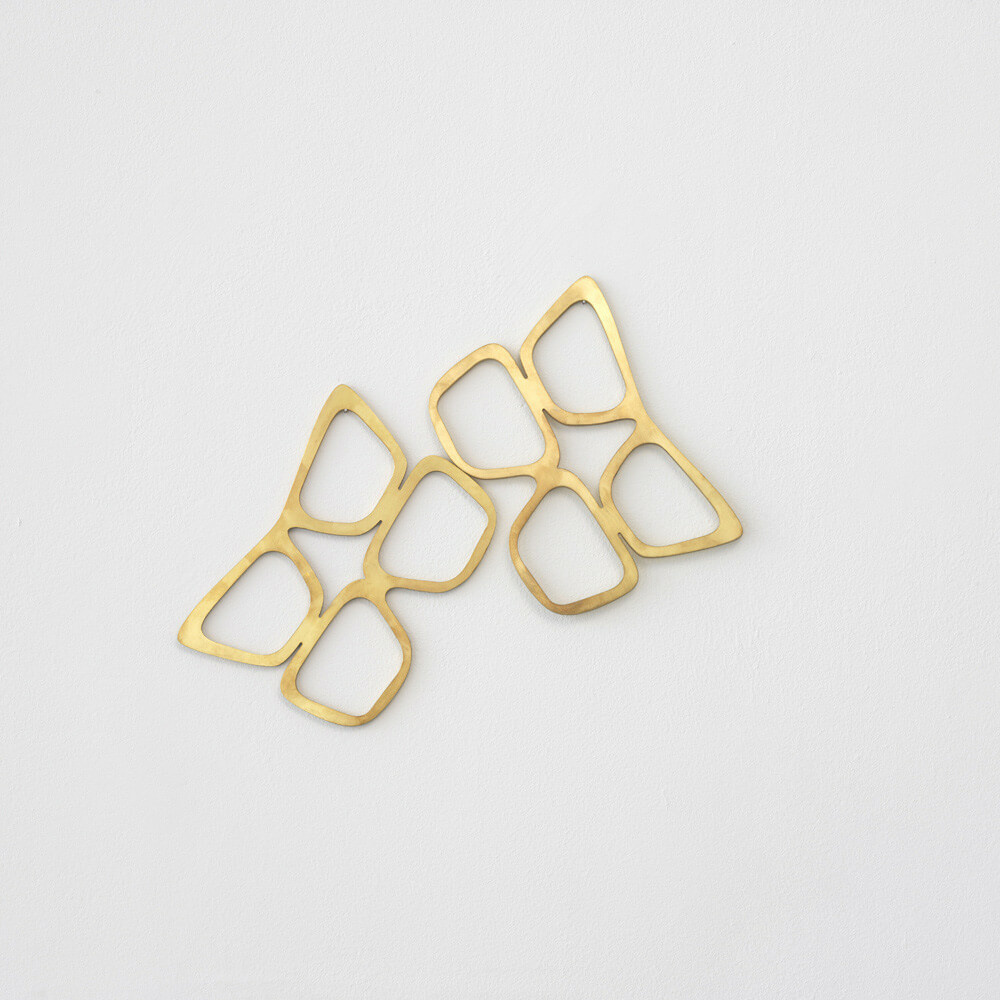 Lisson Gallery is proud to present a new exhibition by Jonathan Monk and Douglas Gordon. Double Act Repeated is conceived as a collaborative project and comprises four films, an opening-night performance and a series of new works created especially for this exhibition. Monk and Gordon share an interest in exploring the creative act as an intuitive and conceptual process, rooted in Conceptual Art. As friends they share a passion for found images, football, word-play and the belief that the best ideas are generated around the dining table.

The Sublimation of Desire, 2008 are four films which record the change of state of a bottle of beer, a glass of champagne, a mug of tea and a cup of coffee from cold to warm and from hot to cold. The films are the re-make of an hour-long video the artists shot in the mid 90s on a very hot afternoon in Budapest of a cold beer getting warm. Again, at the end of the 90s, on an ice-cold morning in Shwaz, Austria, they documented a hot mug of tea becoming tepid. The original video tapes are now lost and the artists decided to re-create these moments on 16mm film. Set on a loop, the static images are obsessive recordings of the elapsing of time and minute observations of subtle changes in state and relentless images of the sublimation of desire: cold beer becomes warm, champagne bubbles go flat, steaming coffee and hot tea become undrinkable.

The artists move effortlessly between formats: in the lower level gallery Monk and Gordon present a series of new works which reference the Two Ronnies (Ronnie Barker and Ronnie Corbett), a British sketch show the artists share fond childhood memories of. The logo for the programme, two pairs of spectacles, is multiplied and presented in variations of scale and material. The sculptures, affixed or simply leaning against the walls, are a celebration of the double act – incidentally both artists also wear glasses. As the films act as a visible transcription of the passing of time, so the sculptures represent a material translation of an idea, something the artists have also explored in numerous neon works, where neon transcriptions are intermittently lit in correspondence to actions or experiences that the two artists have performed together or simultaneously in different places, thus recreating the substance of the act as duration.

For the opening night Friends Electric Bar, will see Gordon and Monk hosting a temporary bar in the gallery, sharing their favourite drinks and music with the visitors to the show.

About the artists:Jonathan Monk (1969, Leicester) and Douglas Gordon (1966, Glasgow) met for the first time in 1990 in Glasgow, where they both studied fine art, possibly back-stage at a Miles Davis concert or while watching England lose to Germany on penalties.

The films formed the basis of an exhibition at the Fondazione Morra Greco in Naples in 2009 and are presented in London for the first time.