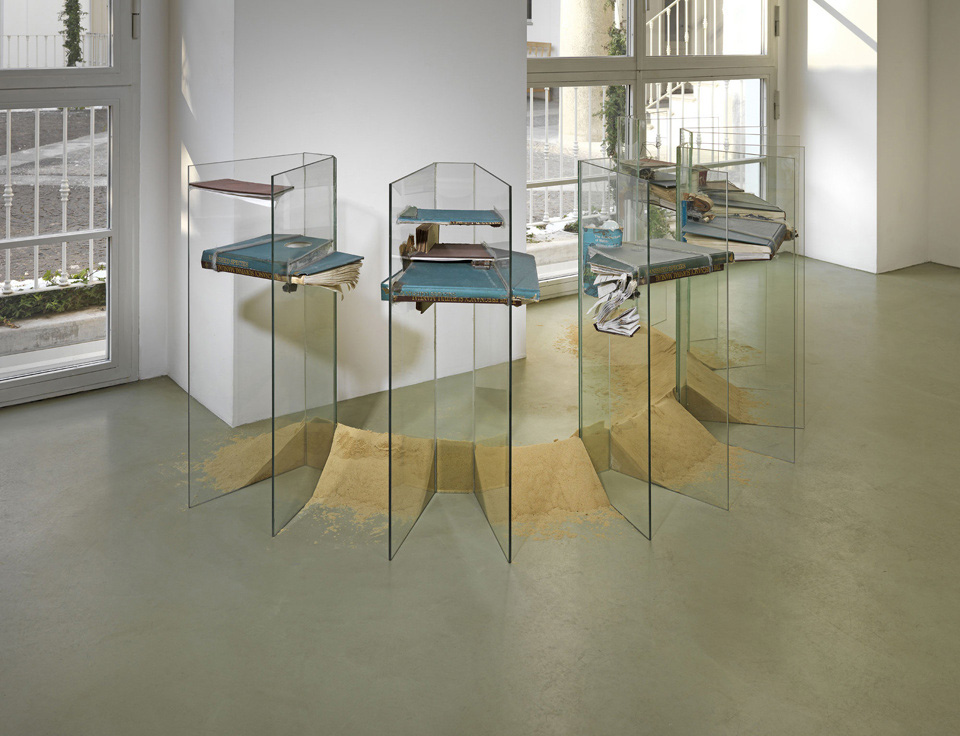 John Latham / Lee Ufan presents the work of these seminal artists, renowned for their conceptual and theoretical rigor. Each in their own unique way, the oeuvres of John Latham (1921-2006) and Lee Ufan (b. 1936) are testimony to a life-long investigation of the universe and the human understanding of its governing rules.

The gallery space is dedicated to the presentation of a series of works developed by John Latham over the course of 40 years, which examine the artist’s understanding of the human subject. Latham conceived his work as an articulated and complex system which found visual expression as book reliefs, assemblages, film and performance and theoretical form as conceptual ideas and extensive writings.

Taking as its base an interpretation of Quantum Theory, the central objective of Latham’s theoretical enquiry was to overcome the traditional separation between matter and consciousness. He advocated for an all-encompassing system, formulated as ‘Time-Base Theory’, which could define everything in the Universe – inanimate objects as well as living organisms ¬– as events with characteristic time-bases. A distinctive kind of human subject, who Latham defined as ‘Observer’, ‘Reflective Intuitive Organism’ and later as ‘Incidental Person’, lies at the core of the system.

Latter Day Observer (1963) refers back to a series of works Latham made between 1959-60 called the Observer Reliefs, inspired by Dostoevskij’s novel The Brothers Karamazov. The three brothers – Mitya, Ivan and Alyosha – became for Latham representatives of different states or levels of human existence. While Mitya and Ivan respectively embody an instinctive and rational state, Alyosha was particularly significant for Latham as an expression of a ‘Reflective-Intuitive’ state, sophistication and the ability to embrace reflection and intuition above rationality.

The capacity for understanding relations from a distance and for reaching insights characteristic of Alyosha, led Latham to later develop the concept of ‘incidental person’ in relation to APG (Artist Placement Group), an organisation that Latham helped found in 1966 with the purpose of integrating artists in the system of business, industry and government. APG identified the artist as an agent of change within an established social and economic system.

As part of the APG program, Latham undertook a placement with the Development Department of the Scottish Office in 1975. The project focused on giant shale heaps, locally known as ‘bings’, leftover of the mining industry around Edinburgh. From a 1947 aerial photograph of a group of ‘bings’ Latham identified ‘The Niddrie Woman’, an anthropomorphic shape resembling a female body complete with a heart, torso and uterus. Latham proposed to reconfigure the site as national monument by erecting two gigantic book reliefs, which could be climbed and used as observation platforms for the surrounding landscape. Latham worked on several maquettes for the monuments, which remained unrealised.

The N-U Niddrie Heart (1991) – initially a multiple of 37 elements – refers directly to Latham’s diagrammatic representation of different levels of existence along a linear ‘A-Z’ spectrum. Within this system, where ‘A’ represents the shortest finite element and ‘Z’ the longest the area from ‘N’ to ‘U’ is occupied by human consciousness. Each element is a book shaped glass assemblage that stands on the floor and is connected to the next by a heap of sand. Encased between the vertical sheets of glass, two large green and brown books – The Pregnancy Survival Manual and Vanished Species – appear in each piece in variable permutations together with other assemblages of books, paint, small objects and wires. The ethical content of the books represent the entirety of life from birth to death, through different levels of human consciousness.

The theme of the ‘Niddrie Woman’ resurfaced in a series of works from the mid 1990s. Known as the N-U Niddrie or Cosmic Blood series, these works adopt the spray-painting technique and were realised by placing sheets of canvas on the floor of Latham’s studio and transferring the colour applied to the glass onto canvas by surface contact. Some of the canvases reproduce patterns which directly relate to the ‘Niddrie Woman’ anatomy, while others refer back to abstract motifs. The multiple dots produced by the use of the spray gun produced an ambiguity of scale, symbolising either clusters of infinitesimal particles or incommensurable galaxies. Latham often presented canvases unframed or partially rolled, so that the full extent of the painting was never visible.

The Niddrie works, which were first presented in Edinburgh as a cohesive installation in the mid 90s, contextualize Latham’s concept of humanity within the smaller ‘least’ event on one side of the spectrum and the universe and the ecological question of the survival of the planet on the other. 01-1-10 (2005) is Latham’s final work and was described by the artist as ‘a sign for a (least) extended event which arises from a non-extended impulse’. The work is constituted of two transparent glass panels and one white board with a black vertical mark – signifying the binary state 0, or emptiness, and state 1, matter or ‘Least Event’.

Latham started to use glass in 1980, its transparency and stable nature symbolizing an a-temporal omnipresent. Precursor to Story of the RIO (1982) is a study for a sequence of 18 panels tracing the development of complexity from a proto universe, indicated by transparent glass, to the ‘Reflective Intuitive Organism’ represented by book clusters.
Latham has often displayed reprints of the original aerial photograph of the ‘bings’ alongside his canvases. This image, a view that is denied to a human living on the planet, is connected to Latham’s 16mm film Erth (1971), presented here in video format. The film follows a rigorously structured sequence of static images, accelerating through a countdown from outer space to the surface of the earth and lastly a human figure. In his monograph on John Latham, the art historian John A. Walker considers it a metaphor for “the kind of distancing Latham considers necessary if humanity has to see itself objectively.”

Two works by Lee Ufan are presented in the outdoor sculpture garden: Relatum - Lover (1986) and Relatum - Friendship (2003). Lee Ufan is recognised as one of the most significant members of the avant-garde Mono-ha (Object School) group active in Japan in the late 1960s, early 1970’s. The Mono-ha school of thought rejected Western notions of representation, favouring ‘the art of encounter’ between the artist’s inner thoughts and exterior reality and focusing on the juxtaposition of raw materials. Lee is equally known for his work in painting and sculpture, as well as his literary contribution as a writer and poet. At the heart of Lee’s practice lies an East Asian perception of the self in connection with otherness and distinct from the Western notion of Ego.

Both sculptures presented here belong to Lee’s series Relatum, configurations of untreated round stones and rectangular industrial iron plates. These arrangements are flexible and occur as a temporary situation, an interaction between the materials themselves and the relation to the surroundings. The sculptures express Lee’s preoccupation with the concept of ‘Yohaku’ or resonant space, emphasising the power and energy of empty space rather than the artist’s intervention: “If I give a strong accent to a space by combining a natural stone with a neutral steel plate, the air around the work, rather than the work itself, takes on density, and the site where these objects are placed vividly reveals itself as an open world.” 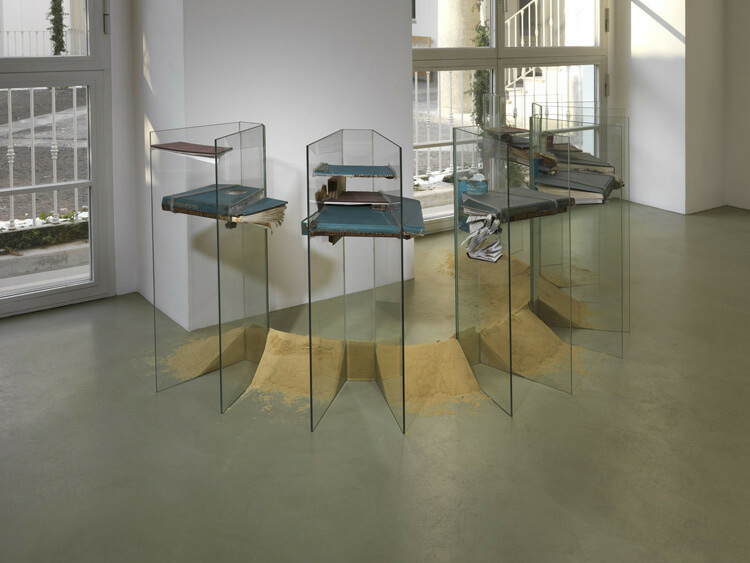 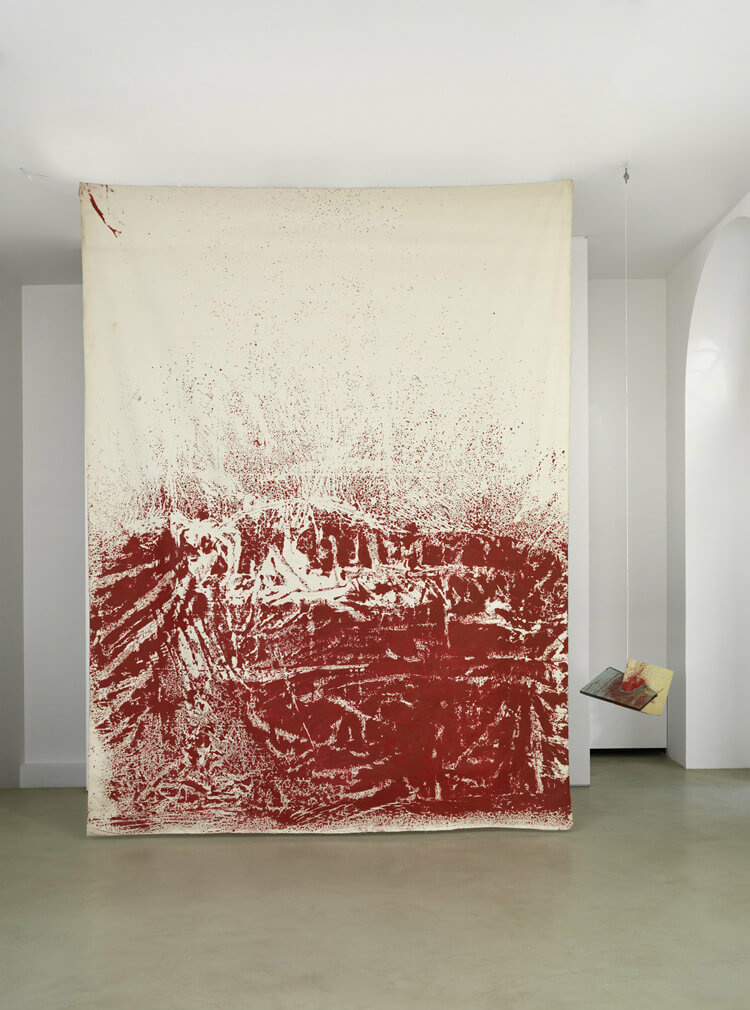 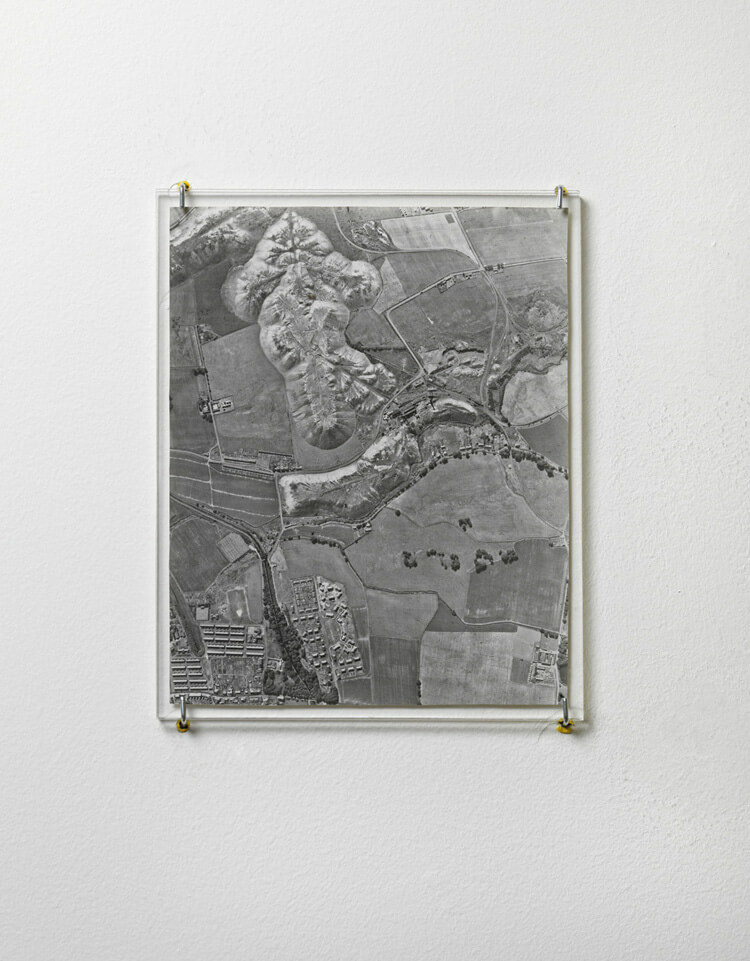 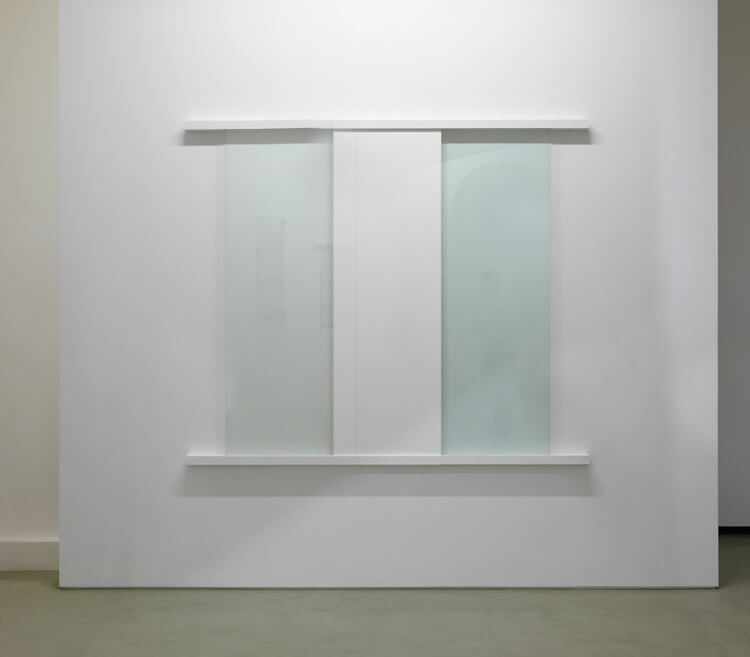 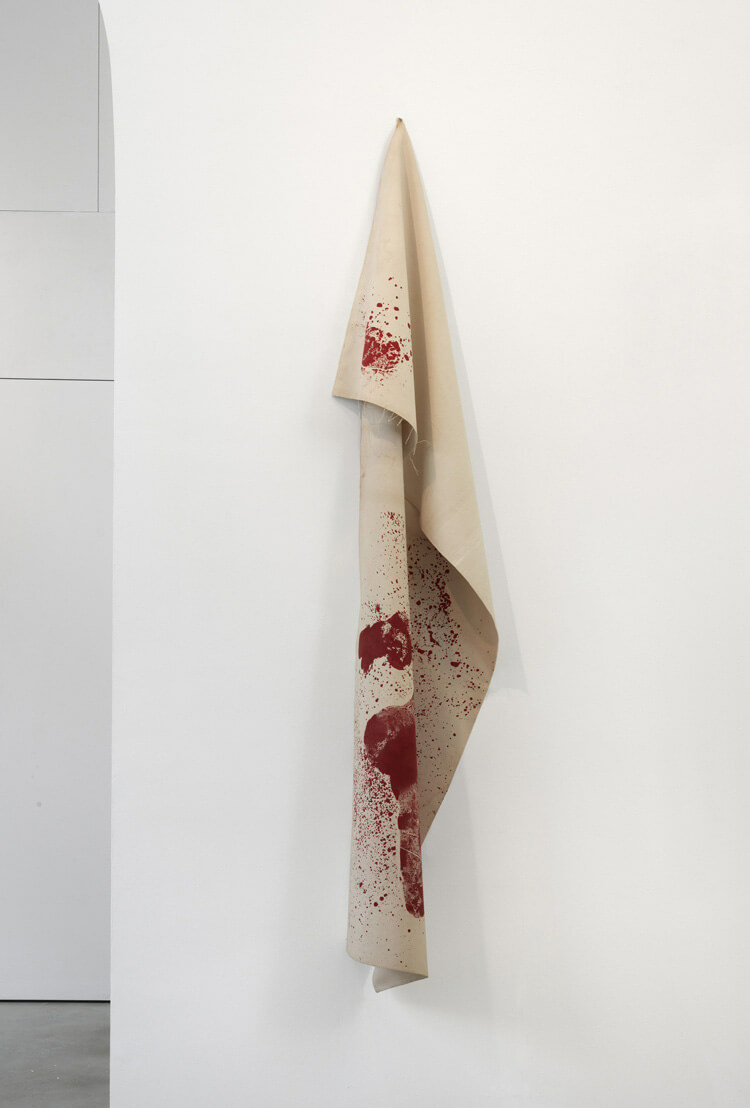 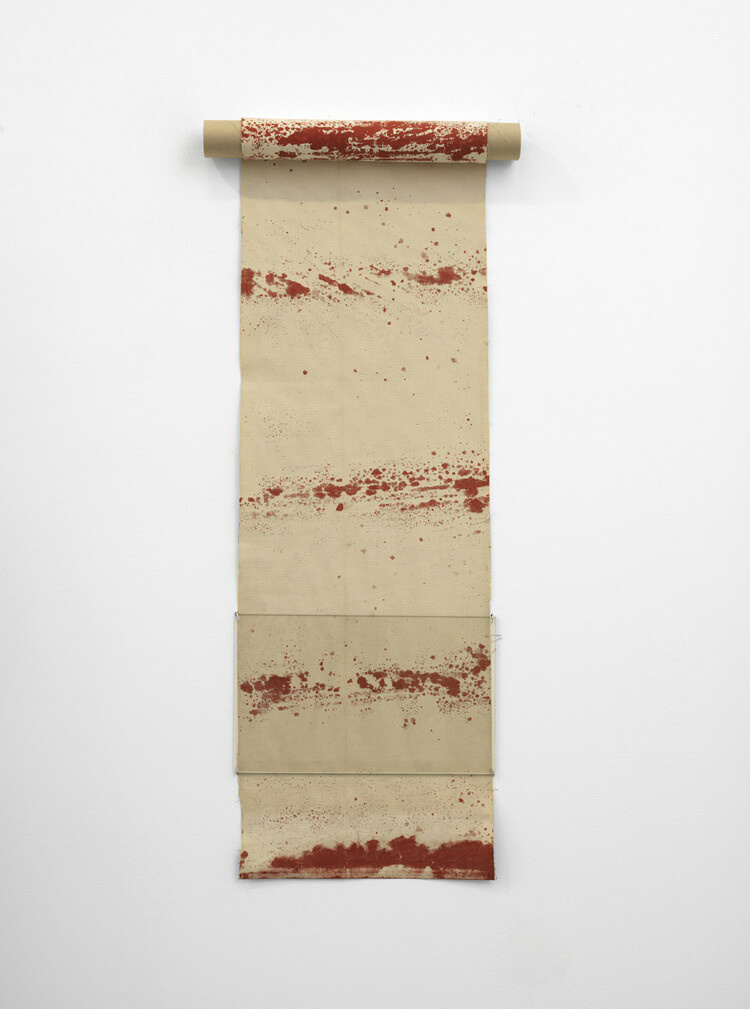 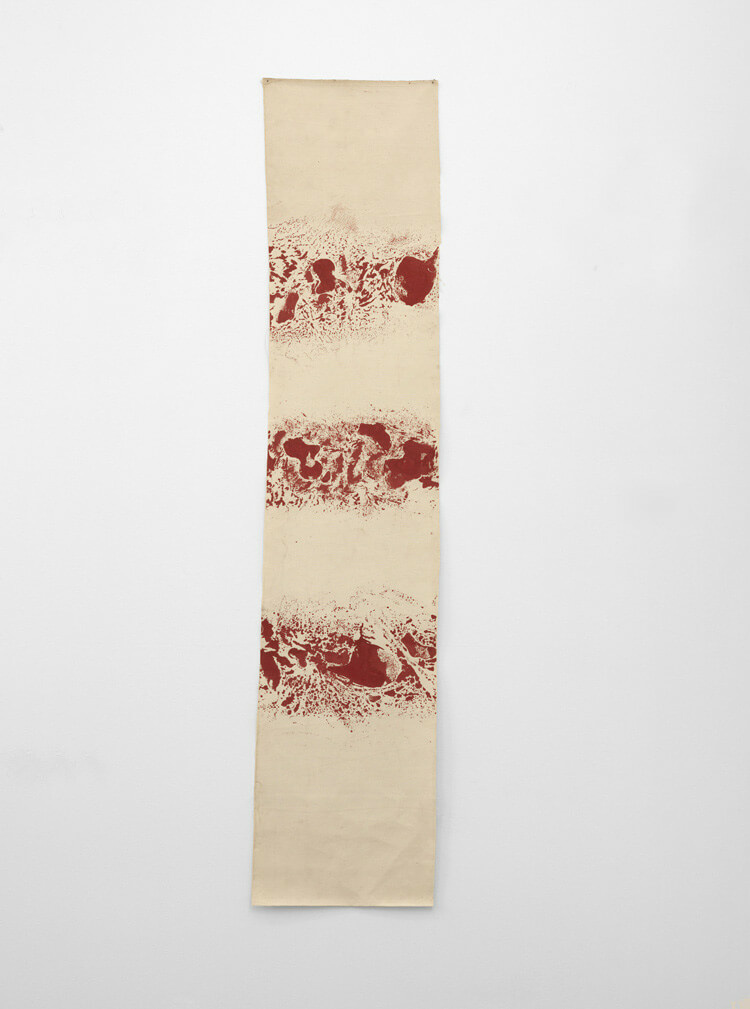 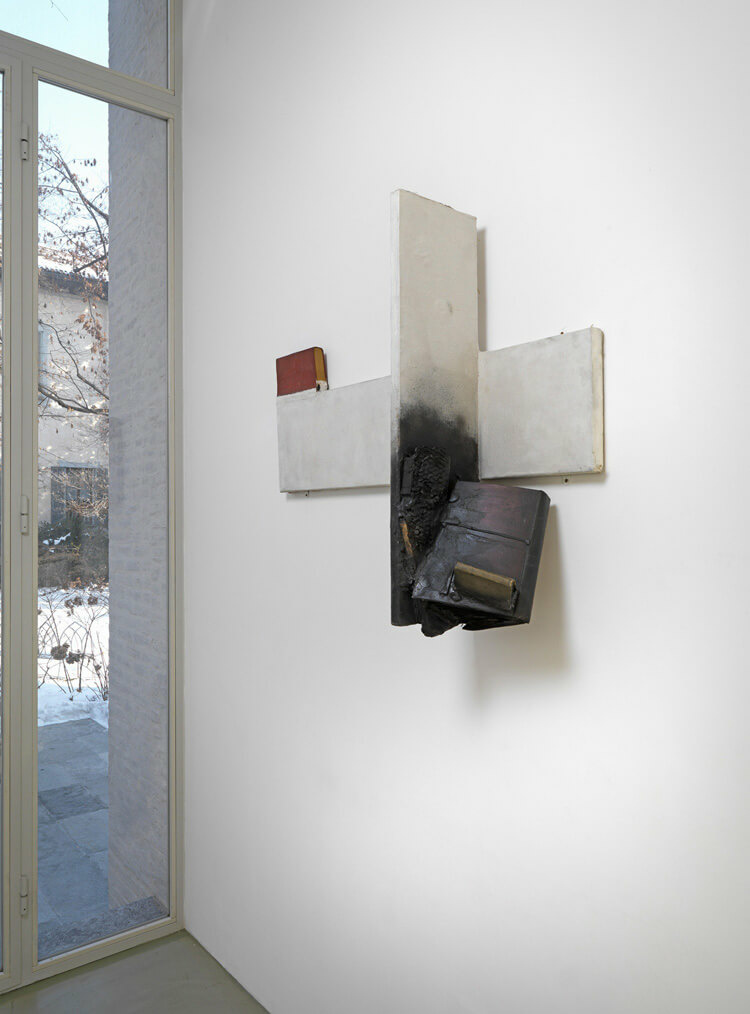 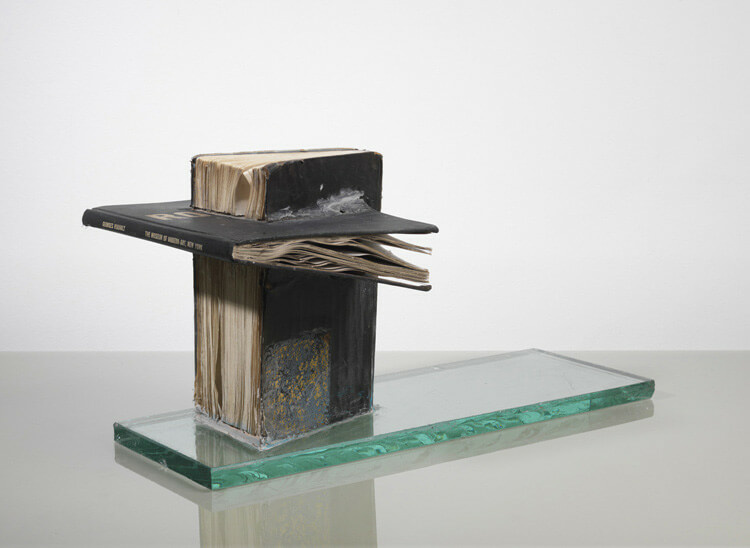 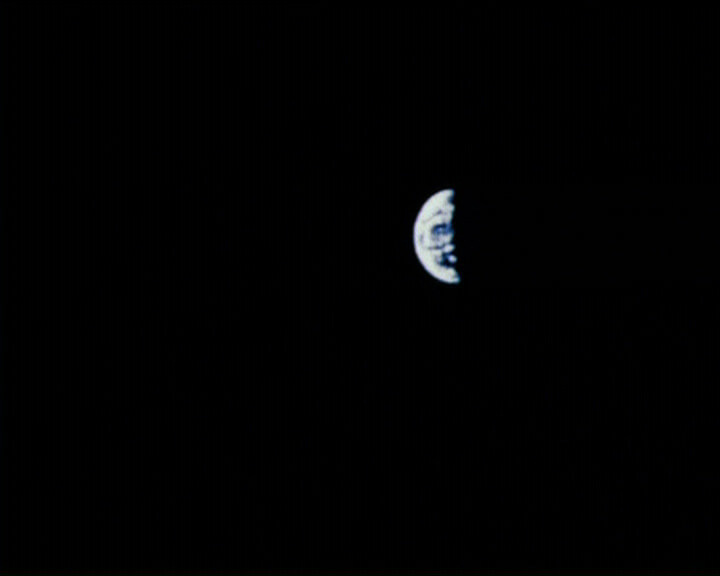 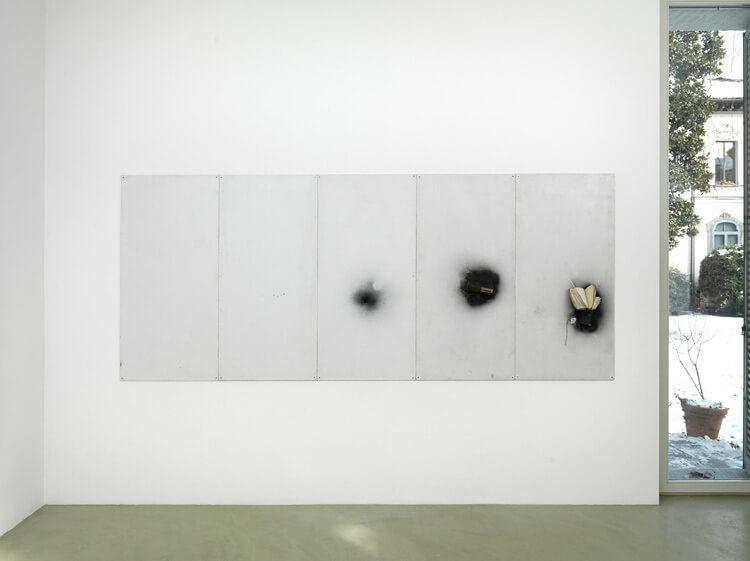 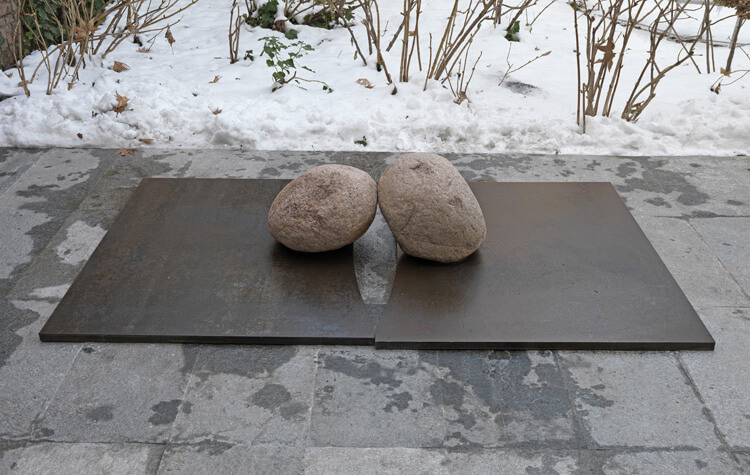 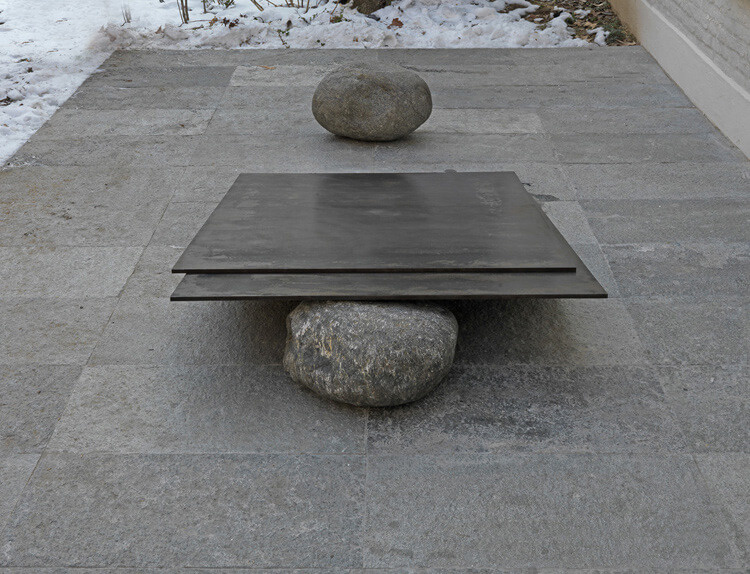