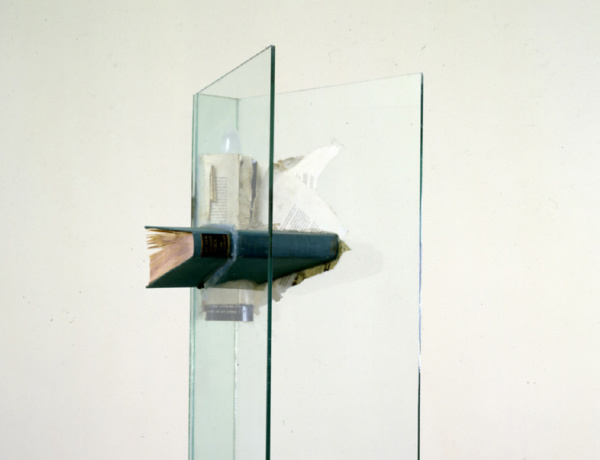 Lisson Gallery presents its first New York exhibition of British artist John Latham (1921–2006). The exhibition reveals Latham’s remarkable multi-faceted practice through works made throughout his career, focusing on his “skoob” pieces, and highlighting his powerful contribution and lasting influence on the global development of Conceptual art.

John Latham began using books as a medium in 1958, extending his earliest spray-painted canvases into the third dimension by creating reliefs wherein the publication emerged from plaster on canvas. Titled “skoob,” a reversal of “books,” the works invert the traditional function of literature, typically read in a linear and temporal manner, to create an object that can be consumed spontaneously and without structure. Latham was attracted to their flatness and their diverse formal properties when they were opened or manipulated – in some cases sawed, sliced or even burned. And while they also symbolised language and institutional knowledge, Latham noted: “It was not in any degree a gesture of contempt for books or literature. What it did was intend to put the proposition into mind that perhaps the cultural base had been burnt out.”

While artists from Marcel Duchamp to Jasper Johns incorporated books into their work, no other visual artist exploited the material so consistently and to such an effect as Latham. The exhibition at Lisson Gallery features a selection of the artist’s early book reliefs from the 1960s, which consist of books and a variety of other materials including scrap metal, wires, gauze and nails, attached to a flat rectangular surface with plaster. The largest book relief ever created, Great Uncle Estate (1960) will be on view. Originally designed to cover an entire wall in Latham’s living room, it is composed of ten sections and features around 100 volumes. Each section of the monumental relief includes a book opening towards the canvas as well as other fragments opening toward the viewer – creating an arrangement that contrasts the hidden and repressed with the open and accessible. Colour also plays a vital role in this early work, where different page openings are painted red, blue, gold or grey, with adjustable wires to hold the pages apart so that depending on which page is exposed at a particular moment, the spectator encounters a different hue. Also included is Four Phases of the Sun (1963), which incorporates an interest in astronomical time scales that later informed Latham’s Time-Base works and his theoretical writings. The idea of four phases was influenced by the scientific notion of the sun as a red giant and stars as white dwarfs, and the periods in which they give rise to biological life on the planets.

The exhibition also includes freestanding “skoobs” and a “skoob tower” from the late 1960s and 1970s, which the artist saw as challenging the museum concept of sculpture as solid and permanent objects. The rectangular “skoob towers” are made from discarded art books, law books, encyclopaedias and copies of Punch and The Economist, all opened at right angles and stacked on top of one another. They were then slowly incinerated or exploded, some during the seminal Destruction in Art Symposium of 1966, emphasising the role of traditional modes of thought and hegemonic institutions in stifling original thought and their inefficiency in conveying knowledge and truth.

During a series of events in 1967, Latham began to insert pipes into books, pumping polyurethane through them. Named “book plumbing,” he explained that this is analogous for how information is transmitted from source to source and from generation to generation. The Laws of England (1967) is an early example of this series. The experiments led to the expanded foam works, including the Classical Painting series of the late 1980s – three of which will be on display in the exhibition. Sculptures from the 1980s which incorporate glass will also be on view, including Moral High Ground, in which Latham overtly incorporates religious texts and addresses liturgical literature by placing its dismembered parts between panes of glass – a theme he would continue until his death.

Highlighting Latham’s provocateur nature is his seminal sculptural work, They’re Learning Fast (1988): a fish tank containing a number of piranhas and waterproofed inserts with extracts from Latham’s philosophical treatise, Report of a Surveyor. This text, written by the artist in 1984, addressed the failure of the British government in supporting art. As the viewer moves around the tank, the printed texts appear and disappear, due to the mirroring effect caused by the reflections on glass and water. Layered with meaning, the flesh-eating fish no doubt represented the British art establishment who criticised Latham’s theories, and the multiple reflections within the tank also called for humankind to reflect upon the nature of its existence. 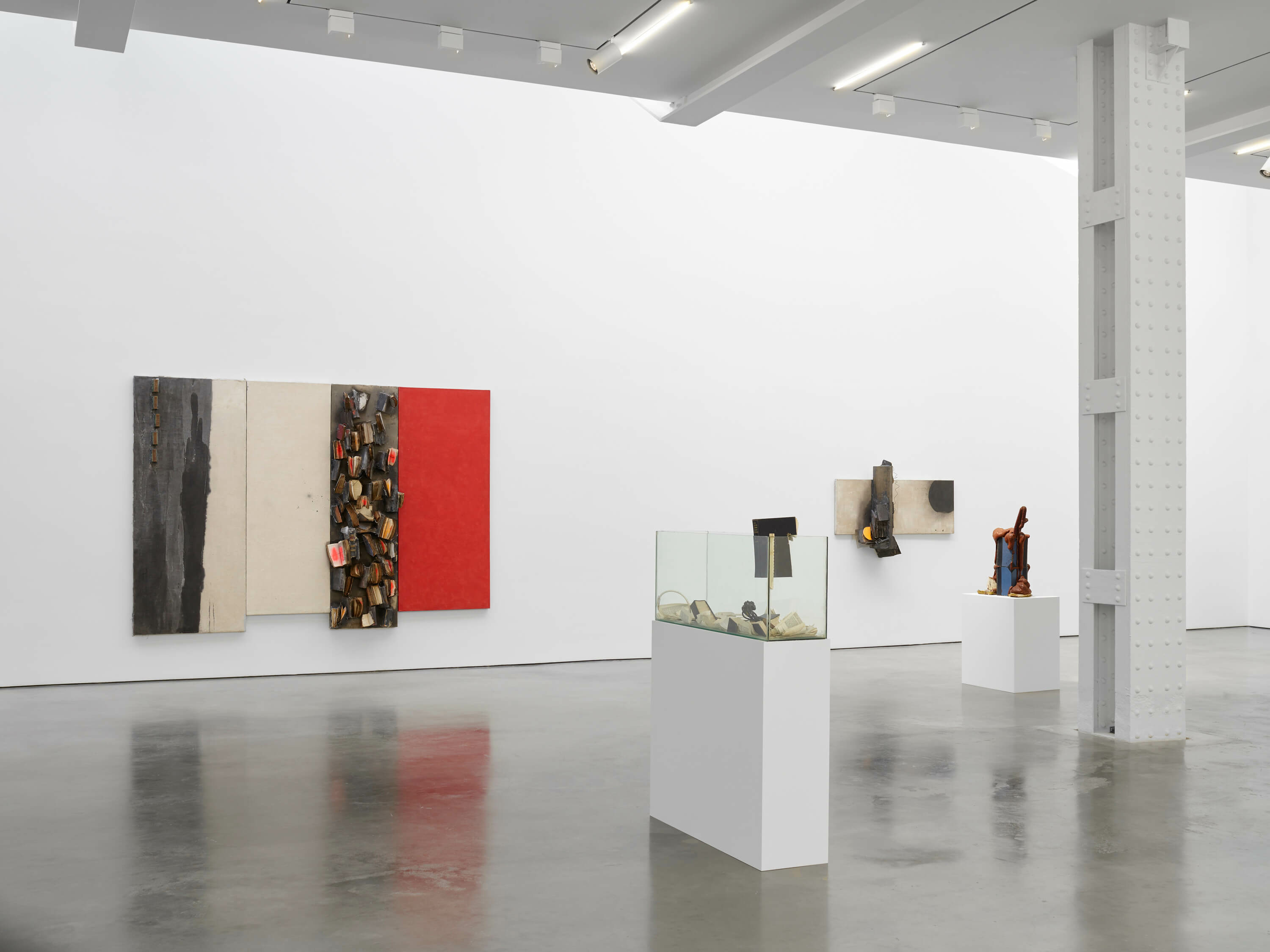 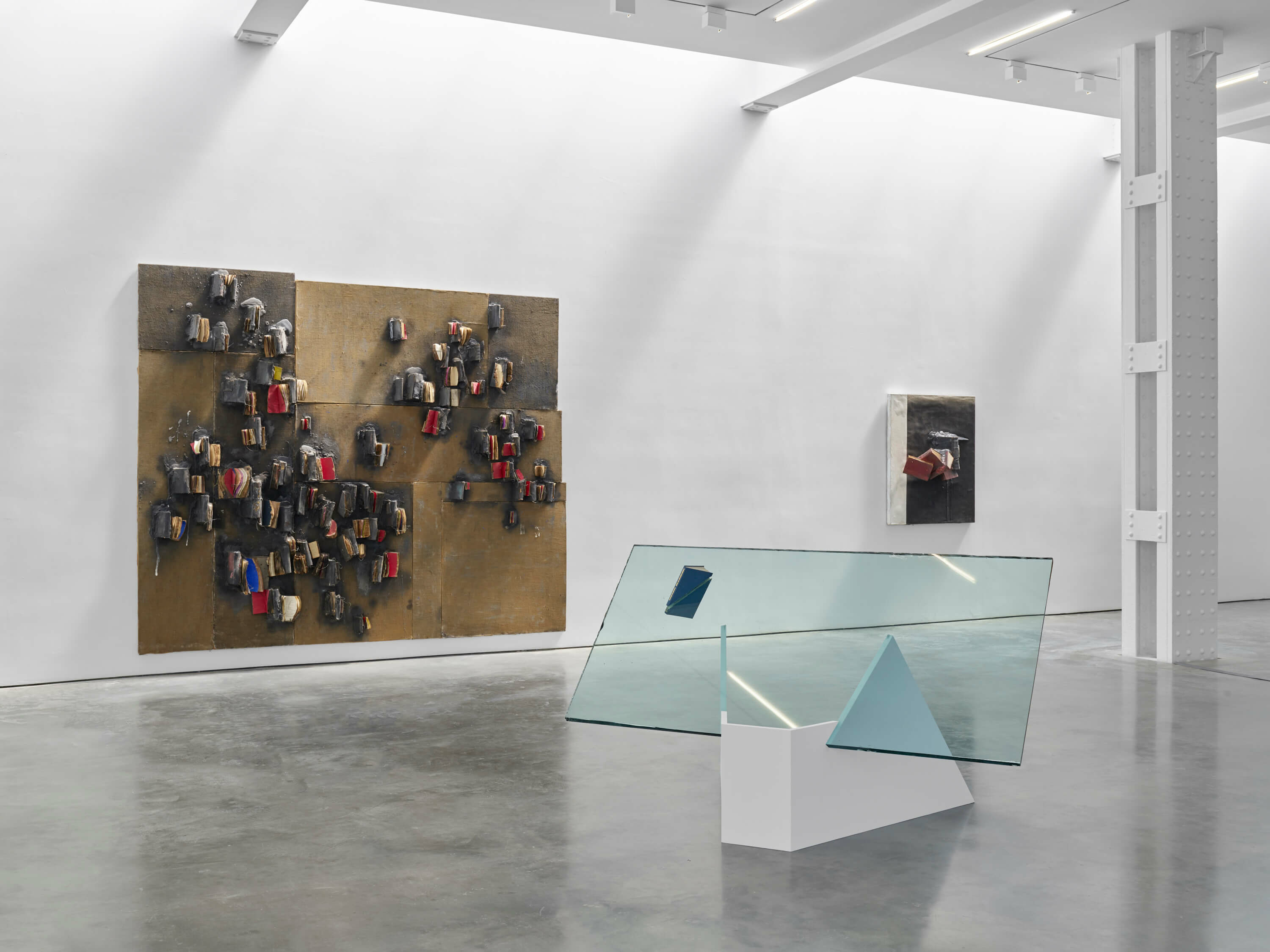 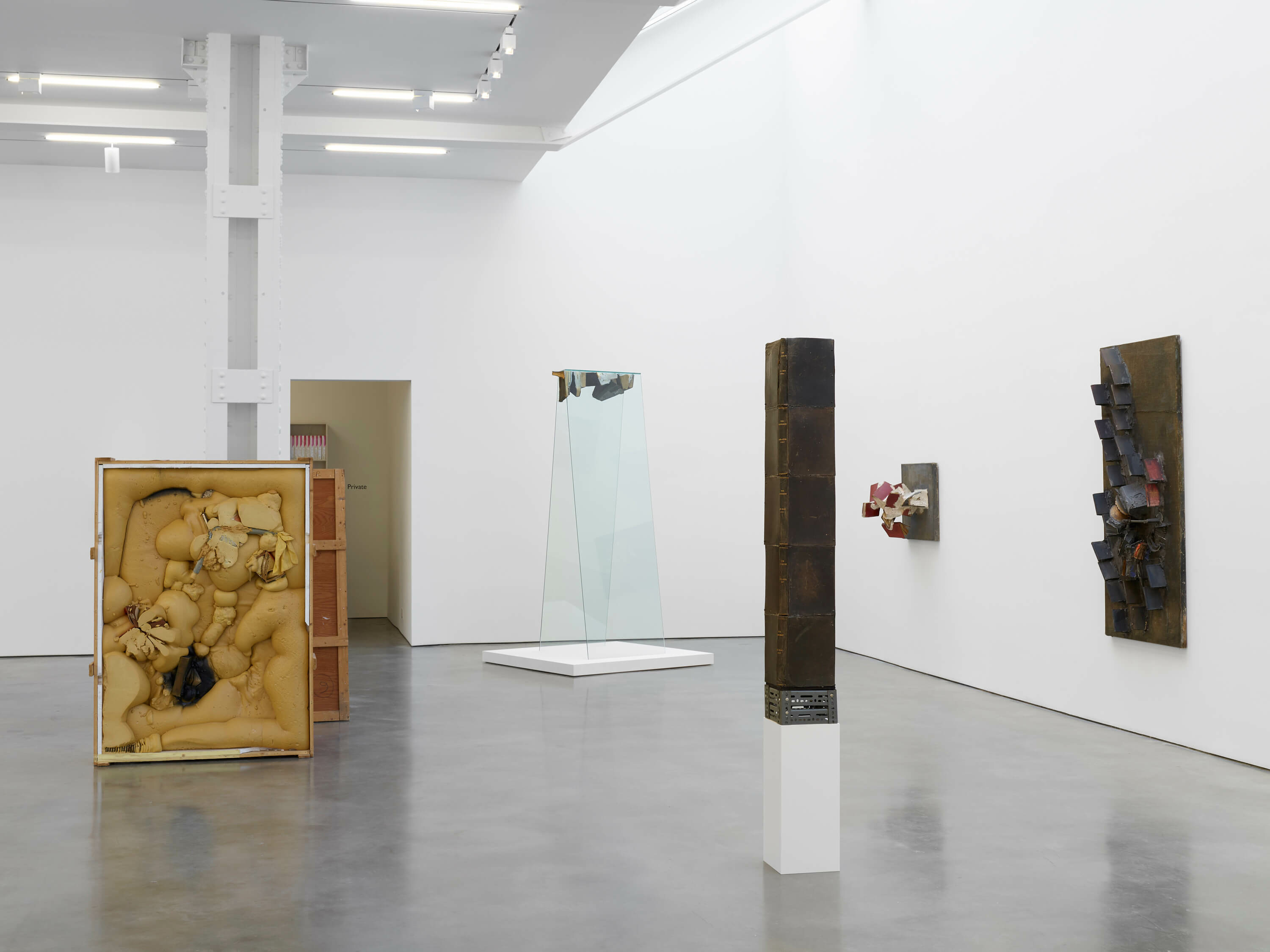 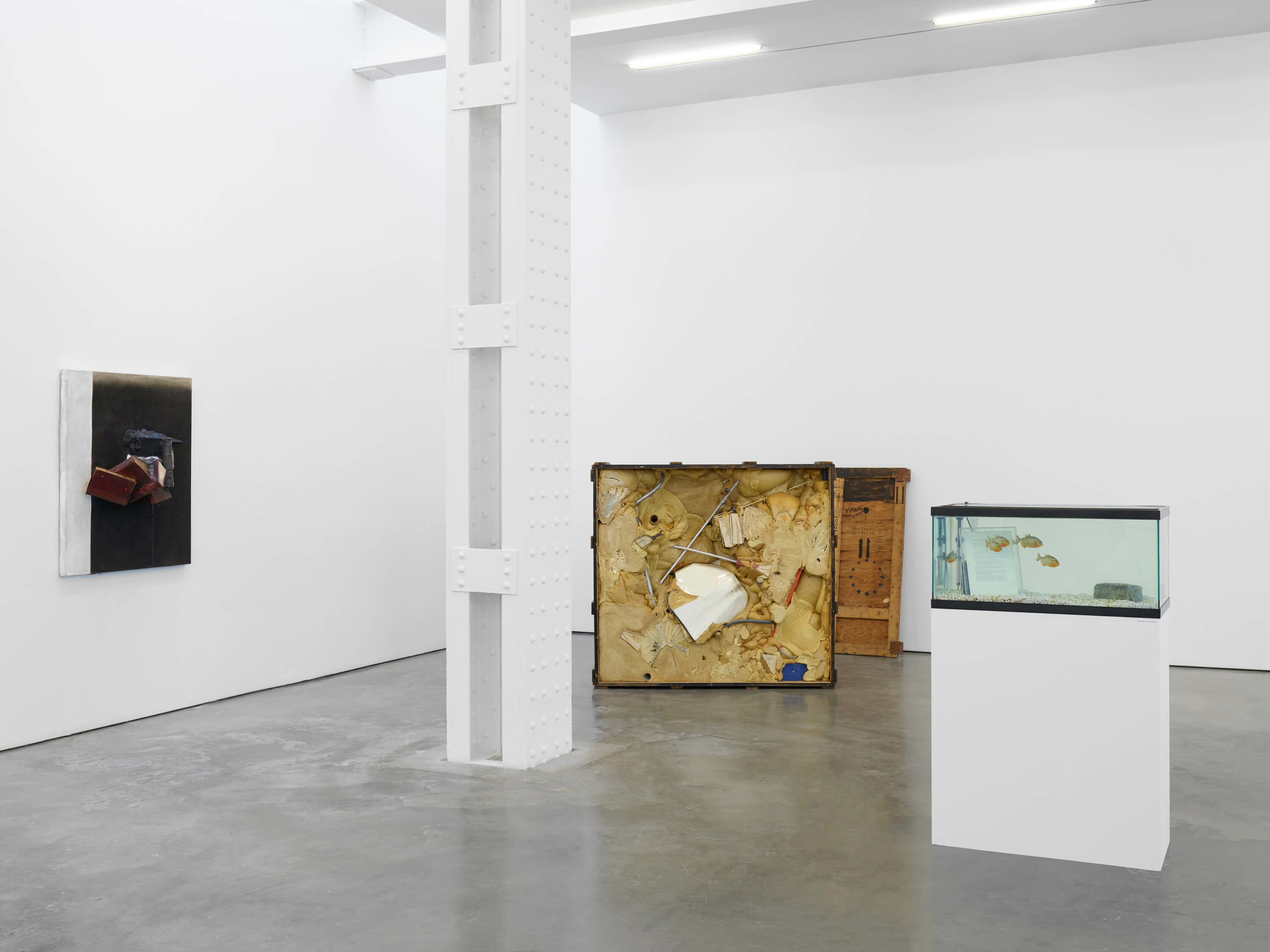 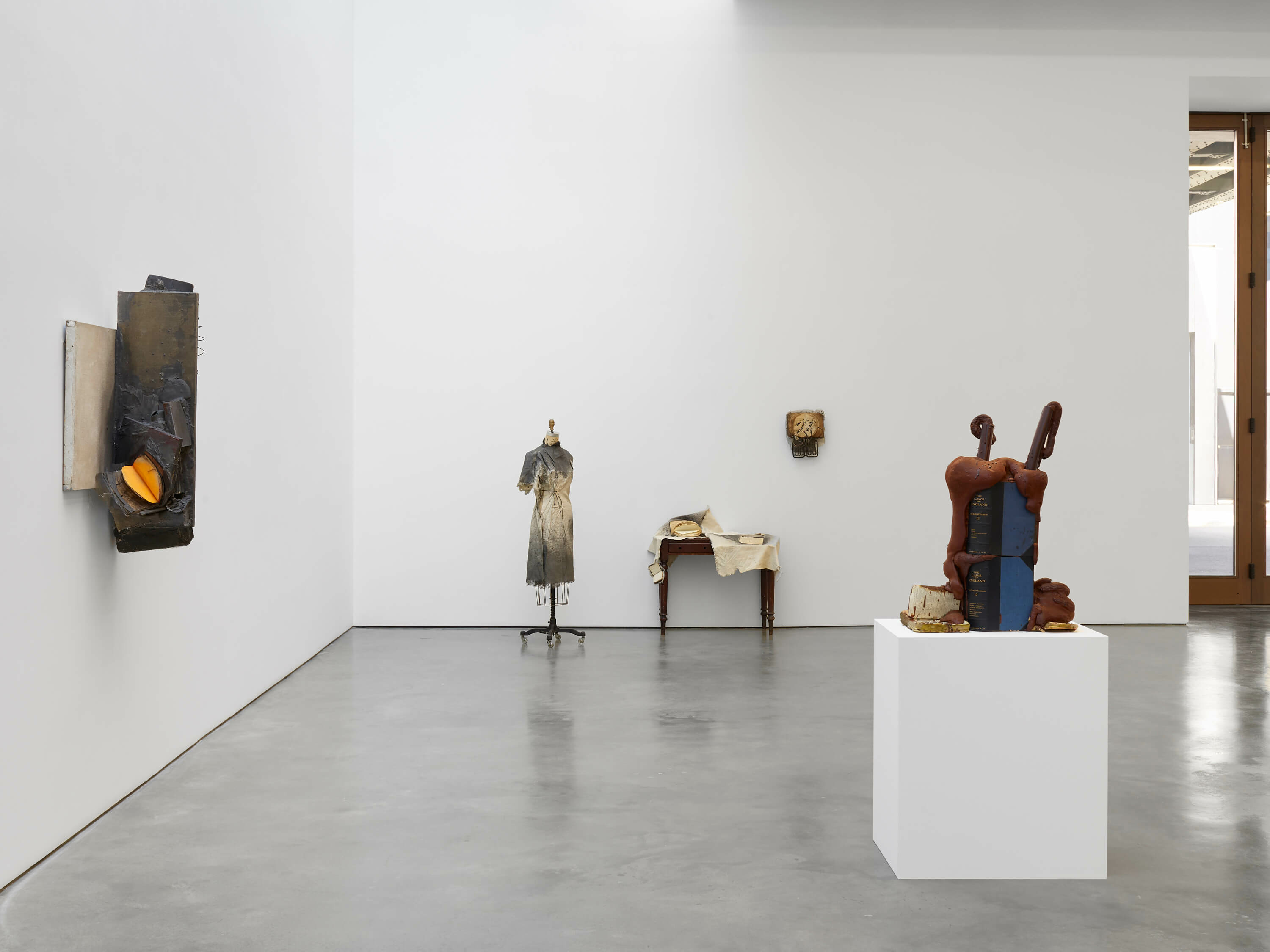