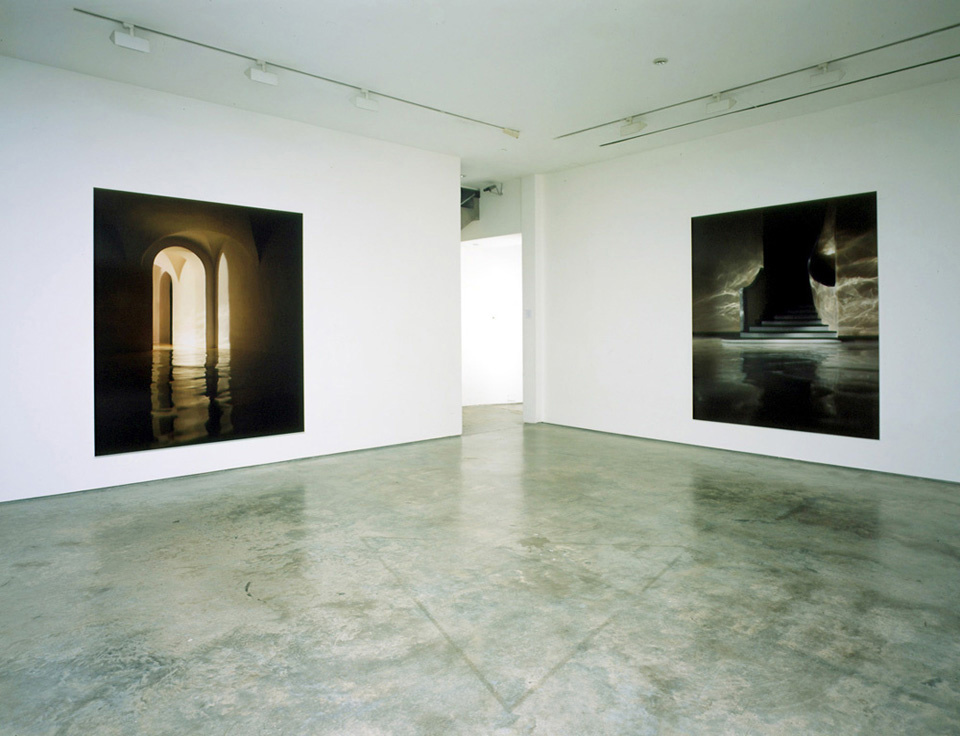 “Casebere allows us to fill the empty space of his spatial stage which produces the effect of a primordially experienced landscape, at once close enough to be touched and distant enough for reflection.” Anthony Vidler

Paradoxically emotional and austere, Casebere’s work centres on the point where photography, architecture and sculpture intersect. Carefully constructing table-top models of interior spaces using plaster, Styrofoam and cardboard, he dramatically lights these miniature interiors or “sites” before photographing them and enlarging the prints using high spec Cibachrome—a process usually associated with lush, glossy colour photography. The results are both surreal and remarkably realistic. Each model is specifically constructed to be seen through the lens of a camera and takes advantage of photography’s ability to flatten space and capture lighting effects invisible to the eye. Though devoid of either plot or characters, his images of architectonic constructed spaces are nevertheless cinematic and poetic, at times implying a mute melancholic loneliness.

In this exhibition Casebere constructs three types of models, each in a different style. The first category, inspired by the architectural work of Richard Neutra and Victor Horta, he refers to as “International” and includes Wrap Around Window, Dorm Room and Turning Hallway, each creating a somewhat dismal architectural “present” vaguely suggesting globalisation. The Red Room, Green Staircase and Yellow Hallway are images taken of “Neo-classical” models in the spirit Thomas Jefferson’s Monticello. In these works the artist has “flooded” his interiors creating a play of reflected light and shadows across liquid floors. Although beautiful, the images suggest an element of chaos in a generic, neo- classical colonial world. The third group “Traditional and Ancient” brings together sites with Islamic decorative detail, east Asian structures, and western European classic forms. Spanish Bath, Sienna, Minka with Dirt and Fog and Afghan Tunnel all resonate on theological and socio-political levels, implying tradition and spirituality in various states of disrepair, decline or danger. Taken as a whole, this penetrating body of work evokes an underlying anxiety about the loss versus the retention of things of value from traditional cultures, in our current global setting.

James Casebere lives and works in New York. He has exhibited extensively in the U.S. including the Whitney Museum of American Art, the Museum of Modern Art, NY and most recently in an exhibition organised by SECCA, Gallery, Winston/Salem, which traveled to MOCA Cleveland, Centrede Art Contemporain, Montreal, Canada and the Indianapolis Museum of Art. He has also shown widely in Europe including a solo show at the Museum of Modern Art, Oxford; the Centro Galego de Arte Contemporanea in Santiago de