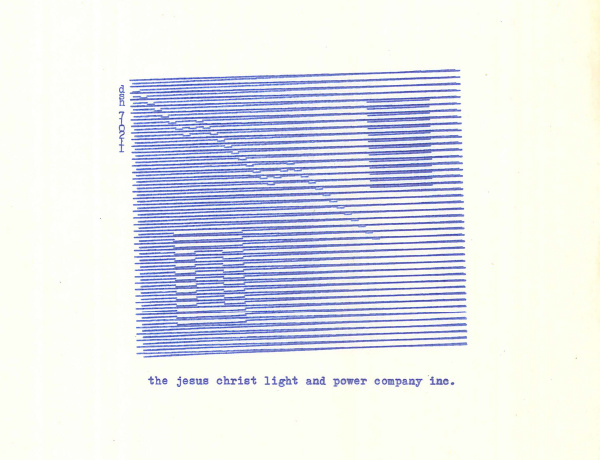 Lisson Gallery presents the first New York show of concrete poet, visual artist, writer and Benedictine monk, Dom Sylvester Houédard (1924–1992) and its first solo exhibition of his work for almost 50 years. In dense visual complexity or in geometrically precise arrangements of words and symbols, Houédard’s typewritten sheets and typographic constructions defied both linguistic constraints and mechanical conventions of the typewriter. These visual poems and their oration, added to his notoriety in 1960s London, where he would often stage readings or performances of his haikus and phonetic compositions. Working into the night in his monastery cloisters, he created a stream of visual poems on his portable Olivetti typewriter, combining conscious and unconscious word association with heavily condensed characters and overlapping key strokes.

These became known as ‘typestracts,’ a term coined by his poet friend Edwin Morgan, but were often full of evocative phrases and vocabulary relating to his studies of many mystical traditions. He gathered inspiration as much from Allen Ginsberg’s Beat poetry and Eastern philosophies such as Zen and Tibetan Buddhism, as he did from Western humanism, his own training as a priest and the growing firmament of Conceptual art, which revolved around the founding of Lisson Gallery and other experimental art spaces in the late 1960s.

His time in post during World War II and experience as an administrative clerk may point to a possible origin of his interest in the subversive use of the typewriter. Finding in its functions the possibility to visualize language in a manner that relieved words of their bureaucratic function, Houédard constructed a pictorial plane and shaped their visual emergence. In doing so, words no longer performed as linguistic signifiers in a conventional sense but were instead imbibed with form and a self-referential status that opened up a more fluid space for interpretation. “During 1945 I realized the typewriter’s control of verticals and horizontals, balancing its mechanism for release from its own imposed grid, (and) offered possibilities that suggested the grading of Islamic calligraphy from cursive (naskhi) writing through cufic to the abstract formal arabesque, that ‘wise modulation between being and not being.’”

Rather than Dadaist declarations, Houédard believed in the transformative power of his word-based arrangements to elicit linguistic, visual and spiritual connections, citing previous examples as “texts created for concrete use: amulets talismans grigris mani-walls devil traps kemioth tefillin mezuzahs medals sacred-monograms”. Seen in this light, his use of language is specific, his lexicon a cumulative barrage of marks, matter and meanings, usually without capital letters and only scant regard for grammar.

This exhibition centres on a number of these typestracts – usually using red, blue and black ink ribbons – notable for their textual content from minimal word-poems to complex, onomatopoeic scores. Another series represented here are the more spatially fluid ‘laminates’ or ‘glasspages’, made by collaging language cut out from newspapers and colored paper which are then laminated together using transparent vinyl. The exhibition is curated by Hana Noorali and Matt O’Dell and is accompanied by a catalogue featuring contributions from Jonathan P Watts, Laura McLean-Ferris, Nicola Simpson and Charles Verey.

Kinkon biobib: life and work of dsh, by Gustavo Grandal Montero will also be presented within the exhibition.

Widely recognised as one of the leading theorists and outstanding international practitioners of concrete poetry, Dom Sylvester Houédard (1924–1992) is firmly rooted in Lisson Gallery’s early history, with his first solo exhibition held at the gallery during its inaugural year in 1967. A practicing Benedictine priest and noted theologian, Houédard, also known by his initials ‘dsh’ or ‘the Dom,’ wrote extensively on new approaches to art, spirituality and philosophy, and collaborated with artists such as Gustav Metzger, Yoko Ono and John Cage. Several of his works that often incorporate language, known as ‘typestracts,’ A4 in size and typed on an Olivetti Lettera 22, were recently on view in ‘from the truer world of the other’ at the Perez Art Museum Miami.

Born Pierre-Thomas-Paul Joseph in 1924 in Guernsey and educated in Rome and Jesus College Oxford, Houédard worked as a military intelligence officer during the war, before joining the community at Prinknash Abbey in Gloucestershire in 1949, becoming ordained as a Benedictine monk a decade later. Houédard OSB (Order of Saint Benedict) went on to help introduce concrete poetry to Britain in 1961, exploring its links to cybernetics and Wittgenstein’s linguistic theory. He was literary editor of the Jerusalem Bible from 1961-66 and founded the Gloucestershire Ode Construction Company in 1967. As well as publishing prodigiously and lecturing at the Royal College of Art and the Destruction in Art Symposium (DIAS) among other venues, he showed his work at Lisson Gallery, London (consistently between 1967-70); the Institute of Contemporary Arts (ICA), London, (1965); the Victoria & Albert Museum (V&A), London (1971); the Museum of Modern Art, Oxford and the Laing Art Gallery, Newcastle, UK (1972). He refocused on religion for the last ten years of his life, as an infirmarian, and died, aged 67, on January 15, 1992.