Zuecca Project Space, in collaboration with Lisson Gallery, presents a solo exhibition of work by leading international artist Marina Abramović timed to coincide with the opening of the 57th International Art Exhibition – la Biennale di Venezia (13 May – 26 November 2017).
The works on display in Venice feature videos and photographs from the artist’s The Kitchen series, all of which were performed, filmed and photographed in an abandoned kitchen in the former nunnery La Laboral in Gijón, Spain. Now a sprawling arts complex, the convent fed more than 8000 orphans when active and strongly resonates with the history of Zuecca Project Space, which is housed within La Zitelle, a sixteenth century Venetian monastery that provided shelter and education to young orphaned girls, who would build their dowries by working in the Zuecca Room.
The writings of Saint Therese of Ávila, a 16th century nun who was said to have levitated in church and once – to her annoyance – in her kitchen while making soup, is cited as inspiration for the series, as well as Abramović’s own diaries, where she confesses her anger at divine forces. Although born as homage to Saint Teresa, the works become above all autobiographical. As the artist states: “In my childhood the kitchen of my grandmother was the centre of my world: all the stories were told in the kitchen, all the advices regarding my life were given in the kitchen, all the future-telling through the cups of black coffee took place in the kitchen, so it was really the centre of the world, and all my best memories come from there.”
The exhibition includes three single screen installations, all from 2009: The Levitation of Saint Theresa, Holding the Milk and Vanitas. The films record simple actions by the artist, facing the camera and barely moving, like a tableau vivant. In The Kitchen I: Levitation of Saint Theresa, viewers watch as Abramović levitates in air, a symbolic cross between Christ’s crucifixion and his ascension, until her body inevitably tenses and she begins to shake. The truth of the body is similarly weaved into The Kitchen V: Holding the Milk, where the artist is shown holding a pot of milk until her muscles refuse to be quieted, the milk spills and the sounds of splashing interrupt the visual spell. The Kitchen VI: Vanitas shows Abramović’s hands outstretched behind a ceramic human skull, either as an offering or a miraculous reveal, until her hands start to flutter, calling to mind the movement of angelic wings.
The videos are presented alongside a range of photographs from the series. While some reference the paintings of Caravaggio or Zurbarán, all of them include portraits of Abramović, clad in black, cooking, meditating or levitating in the same kitchen as the films.
In Venice, Abramović’s work is also featured in ‘Intuition’, a group exhibition presented by the Axel & May Vervoordt Foundation and the Fondazione Musei Civici di Venezia at Palazzo Fortuny. ‘The Cleaner’, Abramović’s first European retrospective spanning fifty years of work, was recently organised by Moderna Museet in Stockholm, Sweden (18 February – 21 May 2017), in collaboration with the Lousiana Museum of Modern Art, Denmark (17 June – 22 October).
Image: Marina Abramovic, The Kitchen IV: Homage to Saint Therese, 2009 (detail). Colour, Chromogenic Print, 136 x 126 cm (53 1/2 x 49 3/4 in) © The Artist; Courtesy Lisson Gallery. 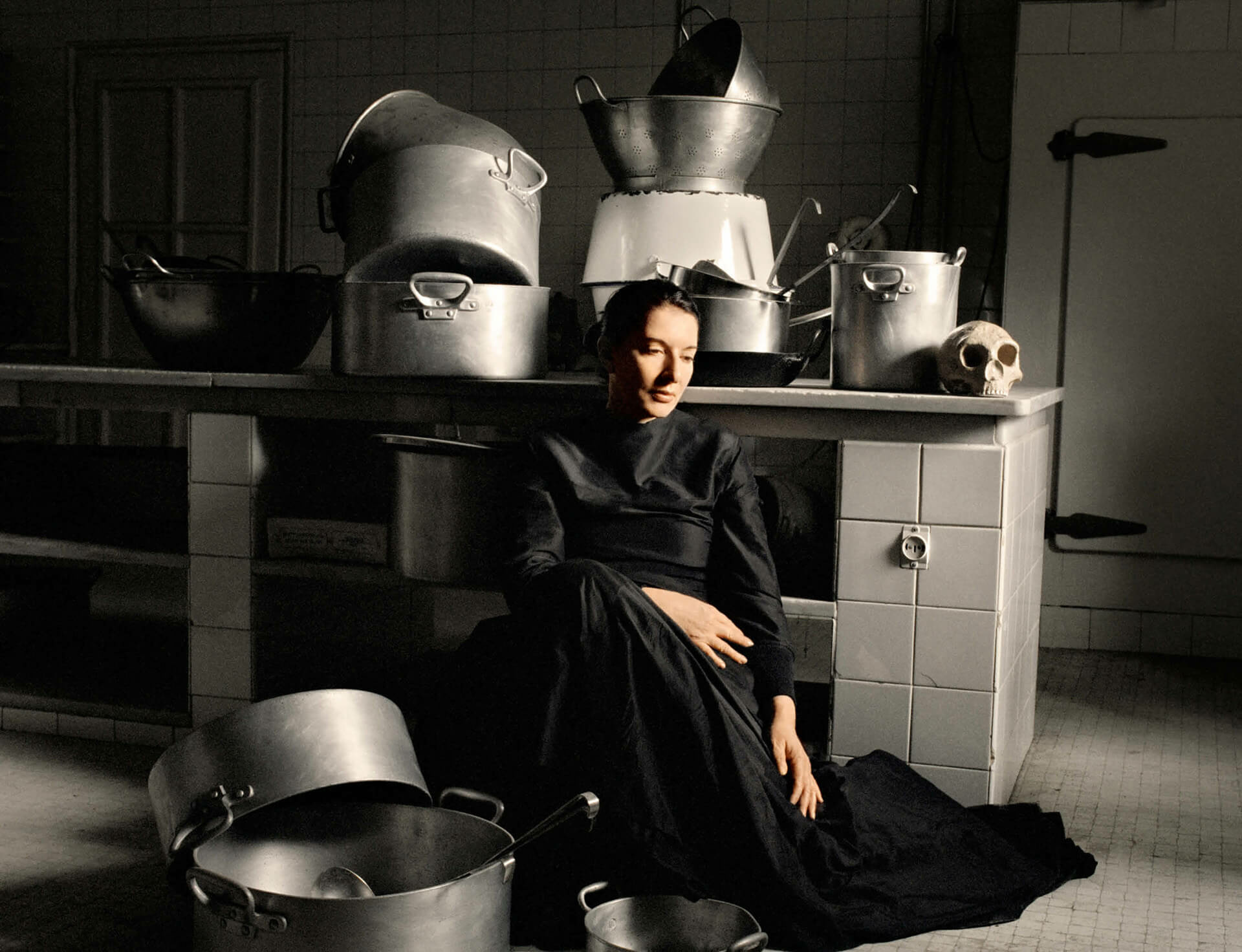