'Stillness in the Midst of Chaos: A Conversation with Masaomi Yasunaga' - Sculpture Magazine

Masaomi Yasunaga pursues “fundamental beauty.” A student of Satoru Hoshino, Yasunaga continues the experimental ethos of Sodeisha, or “crawling through the mud association,” a postwar Japanese art movement (1948–98) that explored the sculptural possibilities of ceramics. But instead of clay, Yasunaga adopts glaze as his primary material, often combining it with raw elements—feldspar, whole rocks, metal or glass powders—before burying his intentionally pliable forms in layers of sand and kaolin, then firing them. Once cooled, the sculptures are excavated from their beds like archaeological artifacts. Both process and resulting works privilege natural forces over artistic artifice, “melting the material and letting gravity take hold of its shape once again, eradicating the ego along the way.”

Robert Preece: Untitled (2021) has an engaging mystery and depth. What were you thinking about when you were making it, and how did you achieve this effect?
Masaomi Yasunaga: First, let me elaborate a little on the basis of my practice. What is fire? Fire is a phenomenon that is an absolute necessity to my method of production, and it lies at the heart of my practice. While fire is an inseparable factor in human evolution, it also possesses the ability to destroy. I experienced its terrifying might four years ago when a fire broke out in my studio and engulfed it in flames.

How do I deal with these flames in my practice? How do I perceive fire? I think of the flames as a filter, and the kiln that controls the flame as a sort of time machine. I once made a white porcelain jar by mixing my grandmother’s ashes with glaze. My main objective was to mourn her in my own way and to share my feelings with my relatives. When I look back on that experience and contemplate what it meant to me, I believe that the process of filtering my grandmother’s remains through fire created a change in state from material to memory. The most important part of this act was the thought that I would never forget my grandmother’s death, and I used the fire to enhance the purity of that thought.

RP: Could you explain the gravel plinth for this work as it was installed at Lisson Gallery in East Hampton, in 2021? What is the visual reference?
MY: My family have been devout Catholics for generations, and I was baptized as an infant. In order to escape religious persecution, my mother’s ancestors migrated to a small island along the Goto Islands in Nagasaki Prefecture in far southwestern Japan. The island was occupied by just a few dozen inhabitants. My mother, who was born there, was also very devout; and growing up, I witnessed her strict asceticism. My works inevitably incorporate this kind of faith and asceticism, but not intentionally. The ideal form of artwork for me is not that of self-expression, but rather, something that exists beyond the filtering of the flames.

RP: What are you thinking about when you create multi-part works such as Fused Pots (2021) and Fused vessels (2021)?
MY: In Japan, each part of a vessel is referred to by the name of a different body part. For example, different parts of a flower vase are referred to as the waist, body, neck, mouth, and ears. I believe this is done to implement a form of personification, and I feel that I also personify works within my practice.

The works constructed with multiple vessels that melt into each other during firing, such as the “Melting Vessels” series, are inspired by the image of a group. These works can refer to my wife, my sons, or myself; they symbolize individual personalities coming together to form a single collective.

RP: What are some of the ideas behind other forms, such as Untitled (2021) and Accumulation (2022)?
MY: The process of shaping my works entails the selection of a few thematic keywords first, and then I engage in a process of intuitively modeling the work based on the theme. Accumulation represents the accumulation of various experiences and the presence of everything. My Christian legacy, my encounter with ceramics, the death of my grandmother, marriage to my wife, the birth of my children, and the act of creating innovative works have all accumulated into what I feel is the essence of this work. From another perspective, for me, it also represents the history of humanity.

Untitled represents artificial objects being returned to nature. Within the process of creating this work, I took granite—a natural object—and shaped it to my will. Then I returned it to its natural state once again through firing and melting the work, embodying a chaotic state that lies between the natural and the artificial.

Masaomi Yasunaga: Looking Afar / 遠くを見る is on view through 29 October. 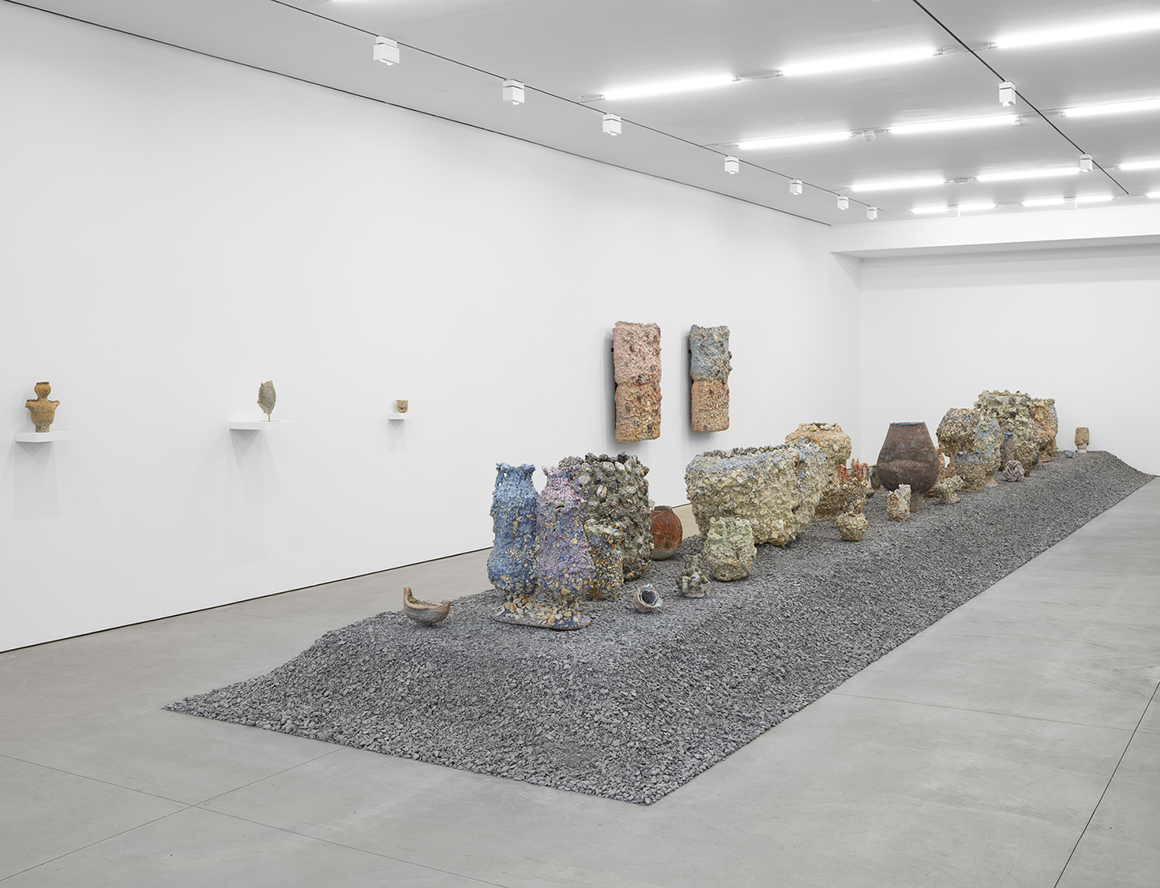