Nicholas Logsdail reflects on his life-long friendship with Peter Joseph

I last saw Peter Joseph on the afternoon of 29 August 2020 where he showed me – as it turned out – his final, beautiful painting. As was customary, we retreated to have homemade chocolate cake and a cup of tea. When we were down to the last slice, his wife Denise asked who would like it, to which Peter answered, “If nobody wants it, I will have it, it’s absolutely marvellous.” This was one of Peter’s favourite expressions when expressing admiration for an artwork, an artist, a writer, a poet, a piece of music or a good bottle of Pouillac (his favourite wine). Accompanying his approval was a thoughtful knowledge, full of observation and intelligence, as well as real connoisseurship. He knew more about art throughout the ages than anyone I’ve known and was, for the most part, self-educated.

I am full of sadness at losing Peter. He was one of the first artists I showed at Lisson Gallery and until now, the longest standing. In his 20s, Peter was busily working his way up in graphics and advertising when he was diagnosed with a brain tumour. Having undergone live-saving surgery, he did not regain consciousness for some time. On coming round, however, it was as if he had been reborn and often speculated that his personality had changed. Leaving everything from his previous life behind, he moved from London to Florence to study art, visiting the great churches and museums, and immersing himself in the art of the Renaissance. Peter found an affinity with artists such as Piero della Francesca, Claude Lorrain, Guido Reni and Tintoretto, as well as the British painter Richard Wilson (who he always regarded as superior to John Constable and J.M.W. Turner). Although he started as a figurative painter, what interested Peter about all of these artists was their use of of light, colour, scale and proportion. He was also fascinated by the hard-edge paintings of Ellsworth Kelly, the obtuseness of Donald Judd, and the colour tonalities of Dan Flavin and Barnett Newman. Above all, one of Peter’s abiding loves was for the emotional impact of Mark Rothko’s paintings.

His artistic epiphany came in 1970 while watching what he described as a ‘well put together but ultimately slightly boring’ French avant-garde film at the BFI in London, where he was a regular visitor. Having fallen asleep during the film, he awoke to the flickering screen of the projector still running after the reel had finished. Peter sat mesmerised, watching the off-white central space of the screen shimmering against its black border. This was the beginning of the body of work known as the ‘border’ paintings – always titled with the two constituent colours, say Pink with Dark Green (1989) or Dusty Lilac with Sienne Brown (1994) – which developed slowly, contemplatively, poetically and thoughtfully over the next 40 years. Peter would say there was no composition involved in his work, only a concentration on the colour tones and the way light hit the surface and interacted with the relative scale of the two rectangles. He compared his paintings to music and often spoke of music as the first form of abstraction, with many great composers, from Johann Sebastian Bach onwards, more interested in sentiment than narrative. This was what Peter sought: to remove the content while retaining the meaning, thereby amplifying the emotion.

Peter’s paintings hold a powerful charge that waits patiently to be received. His following among both international museums and collectors, including the super collector Count Giuseppe Panza, was one of absolute commitment and loyalty. In 2004, after almost four decades of developing his practice, Peter began to adopt a much freer painting style. Partly, he told me, this was because he felt there was not much more he could say emotionally. By then in his mid-70s, he began to work with less formal rigour, although the essence of his approach to scale, colour, light and tone remained. He continued to paint every day in his home studio, on a hillside overlooking a remote wooded valley near Stroud in Gloucestershire.

Interestingly, Peter’s most recent paintings reveal that he had, once again, moved on to a new phase in his practice. In some respects, these works marked a return to the ‘border’ paintings. Here, however, the rectangles were depicted as if they were objects floating in space, one in front of the other, lending them a sense of being frozen – or even falling – within the picture frame. A deeply private man, Peter was extremely disparaging of the vicissitudes of the art world. After leaving his London studio in Belsize Park and retreating to Gloucestershire, he led a reclusive life. Yet, his work was some of the most beautiful and spiritually moving of any British painter, and he created for himself an artistic idiom largely disconnected from that of other artists of his time in the UK, Europe or the US. The extraordinary studies he made for his works remain principally in the possession of his estate, since he looked upon them as a very private and precious personal resource.

Peter was highly resistant to being lauded in his lifetime: he would go to extremes to avoid exposure in ways he wasn’t comfortable with and turned down opportunities to show his work if he wasn’t interested in the context. Yet, surely now he will be discovered for the magnitude of his achievement as a great master of colour, light, space, proportion, the foreground, the background and the mysterious intermediate space in between. Peter died peacefully at the age of 91. In my last conversation with him, he was marvelling at the beauty of the sky that he could see from his hospital room. He also told me, with a customary touch of irony, that he was looking forward to sitting in his new studio at the bottom of the garden with a slice of his favourite chocolate cake and a cup of tea. I like to imagine that’s where he is now. Peter is survived by his wife Denise, an excellent poet and artist in her own right, who was devoted to his work and ideas.

This personal statement by Nicholas Logsdail first appeared in Frieze. 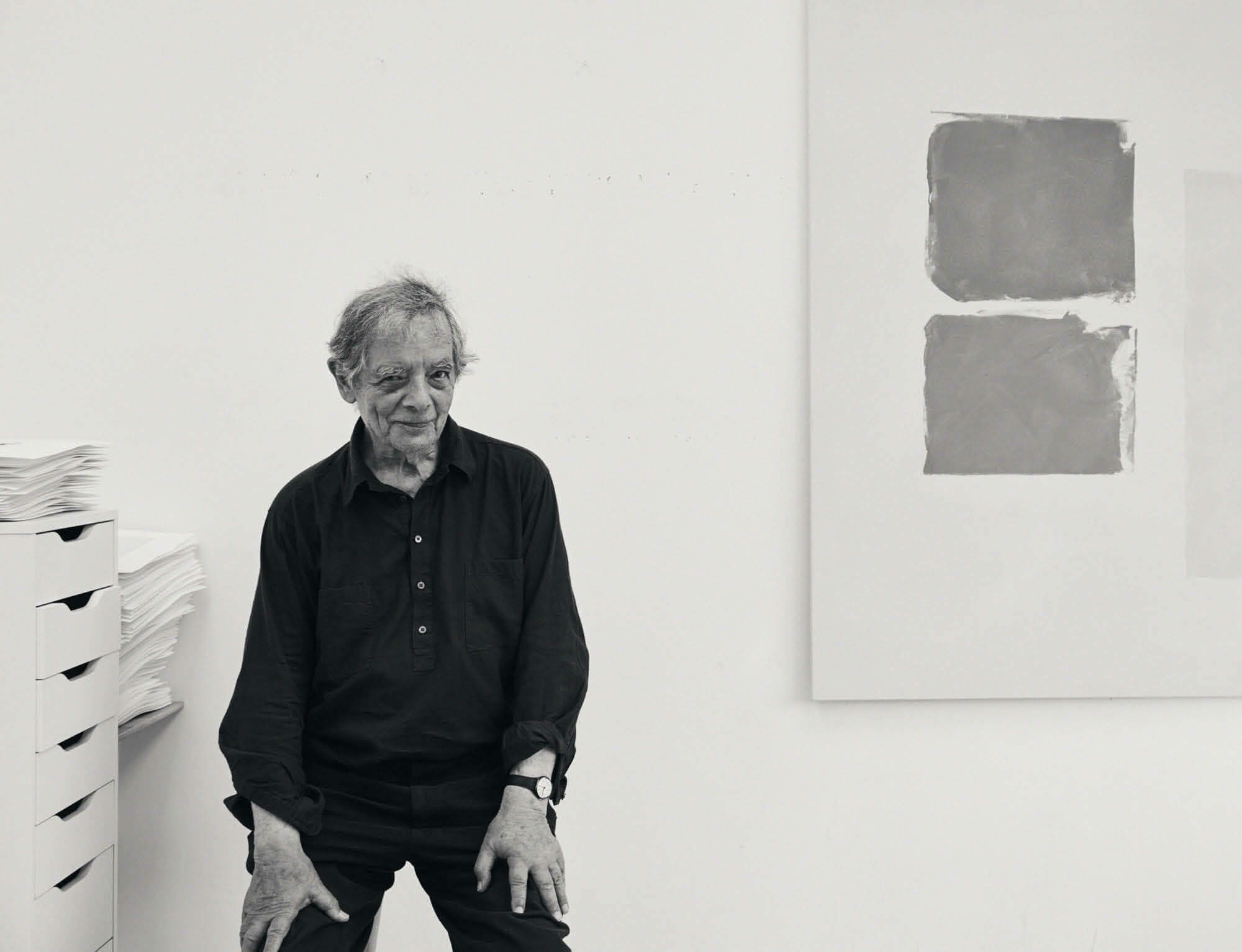