Lisson Gallery is pleased to return to Independent for its 2021 edition with 404.lissongallery.com, a major presentation by digital media pioneers Cory Arcangel and JODI (artist couple Joan Heemskerk and Dirk Paesmans). The artists, who have inspired each other’s work for more than two decades, share an interest in art’s potential to exist digitally and be distributed online. The highly anticipated presentation explores the similarities and differences between their respective practices through video, installation, and interactive online works. Arcangel explores the possibilities and limits of computers playing themselves, creating looping interactions within closed systems that continue until they reach their point of exhaustion. JODI’s works featured in the presentation are representations of data, code, and digital existence that would typically be hidden or intangible, making visual our digital footprint.

The presentation at Independent will feature three works by Arcangel and four by JODI. In Permanent Vacation (2021) Arcangel has installed an ongoing dialogue between two Apple computers that send “out of office” responses to each other until the hard drives fill up and the computers eventually crash. Background programming code is brought to the fore in JODI’s The Backdoor (2021), which features a 4-meter x 2.5-meter LED screen that presents endlessly scrolling server logs. In a new work conceived exclusively for the Independent presentation, Joan Heemskerk has created an installation of four video NFTs, each titled Chameleon (2021) with individual numbers. Each video shifts along with a respective NFT purchase, altering color and number depending on the virtual wallet code. Further use of screens embody JODI’s interactive WiFi _node#2 (broom) (2017). A hotspot fastened to the end of a broom registers the presence of all WiFi enabled devices within range, making each user present on a nearby monitor, exposing their digital movement through the space.

Across the booth stands Arcangel’s scrolling totem, Facebook, ford, pontifex, fujitsu (2021), a four-channel video of screen-recordings in which bots created by the artist scroll continuously through the Twitter feeds of Ford, Facebook, Fujitsu, and Pope Francis, liking each post they come across. The work is a new addition to Arcangel’s continuing scrolling totem series. Each work investigates feeds from accounts starting with the same letter. Produced over the course of a month in 2003, Data diaries uses a hacking mechanism to transmute the daily contents of the temporary memory on Arcangel’s computer into a series of abstract, glitchy videos. Automation continues in JODI’s 404, an alternative, interactive, 404 error page created for the Lisson Gallery website that is live online for the duration of the fair. 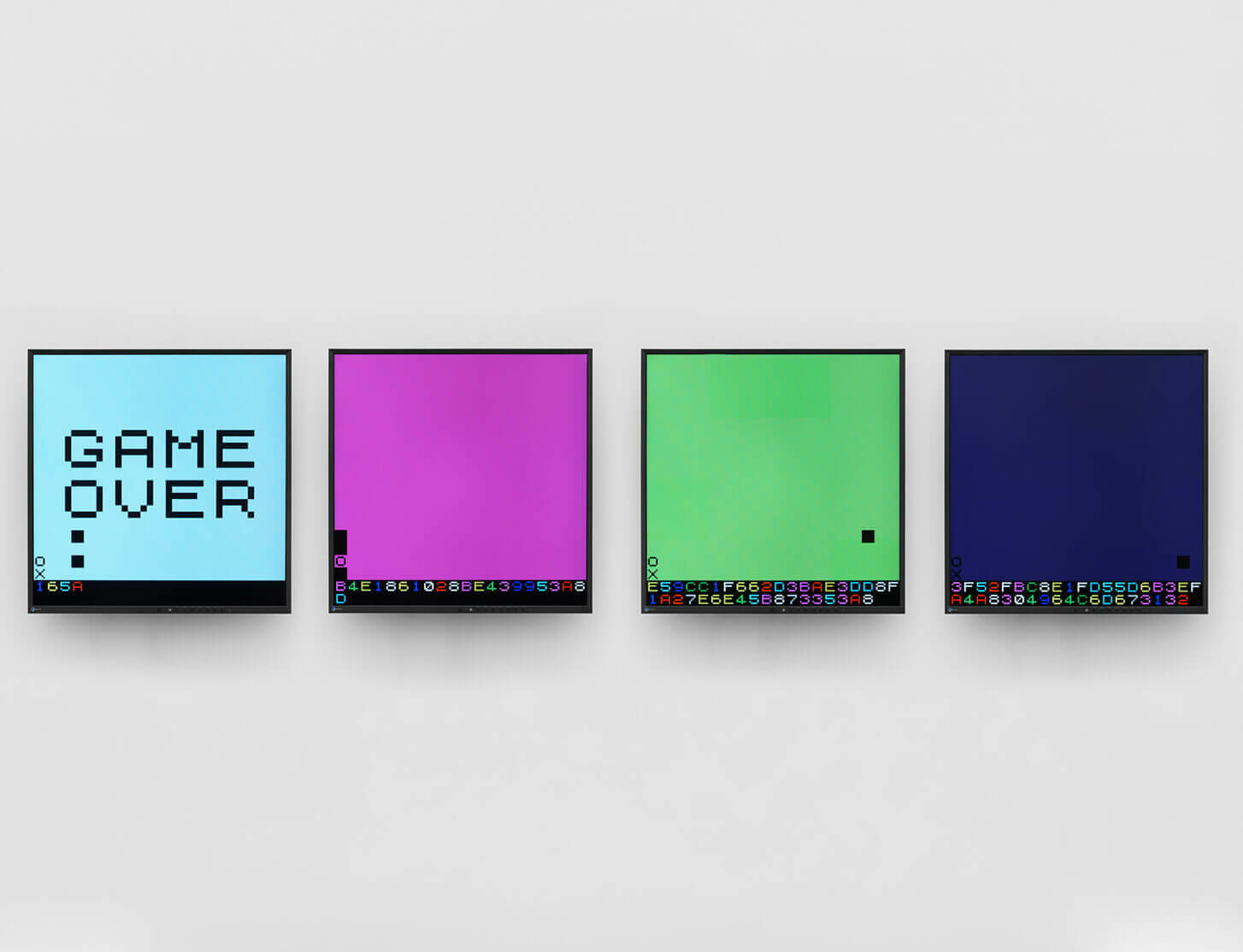