Lisson Gallery is pleased to participate in the ADAA Art Show for the first time. The inaugural presentation features a solo booth of work by Liu Xiaodong, highlighted by the monumental painting, Brawl (2018). Alongside the painting are 14 acrylic works on paper that function as studies for the environment in which the artist’s project is set.

Brawl is a feature work from Liu Xiaodong’s Shaanbei series, one of the artist’s most ambitious and personally significant projects to date. As a student at the Central Academy of Fine Arts in Beijing, Liu would take regular trips to various locations within the expansive Shaanbei region of China, keeping diaries and sketches of the mountainous area surrounding the city of Yan’an and the rural lands far outside the city. The final stop in The Long March – Mao Zedong’s retreat – and the effective birthplace of the People’s Republic of China, the Shaanbei province remains as a site with considerable historical and political significance. Liu’s return to the region in 2018 signaled a revisitation to the foundations of his paintings practice, and allowed him to examine a changing civic landscape. Shaanbei explores the region from both a geopolitical and art historical point of view, while marking the artist’s continuation of his vocation as a painter of modern life.

Liu Xiaodong’s work is the result of direct observation of places of social change. In the Shaanbei series, Liu’s subjects are youth raised by their grandparents. They are left on their own once working-age family members migrate to nearby cities. They spend their time online, or finding work in precarious situations. Brawl was painted in this context from an initial trip taken in the Autumn of 2018. In the painting the artist assembles his subjects - six minors aged between 12-16, set in front of two distinct backgrounds; rural and modern Shaanbei. The kids appear aimless, passing the time in the hillside, wearing what might be counterfeit branded leisurewear. Brawl references the woodblock print by preeminent Chinese modernist Wang Shikuo, Reforming Loafers (1947). The depiction within the woodblock work reprimands the perceived laziness of a younger generation. Liu toys with the tradition of plein air painting, offering a fictious yet realistic situation while conscientiously depicting the landscape in front of him. The painting offers a surreal intensity of color and character, and an improbable collision of nature and civilization.

A solo exhibition of new works by Liu Xiaodong will be on view at Lisson Gallery in New York in spring 2023. 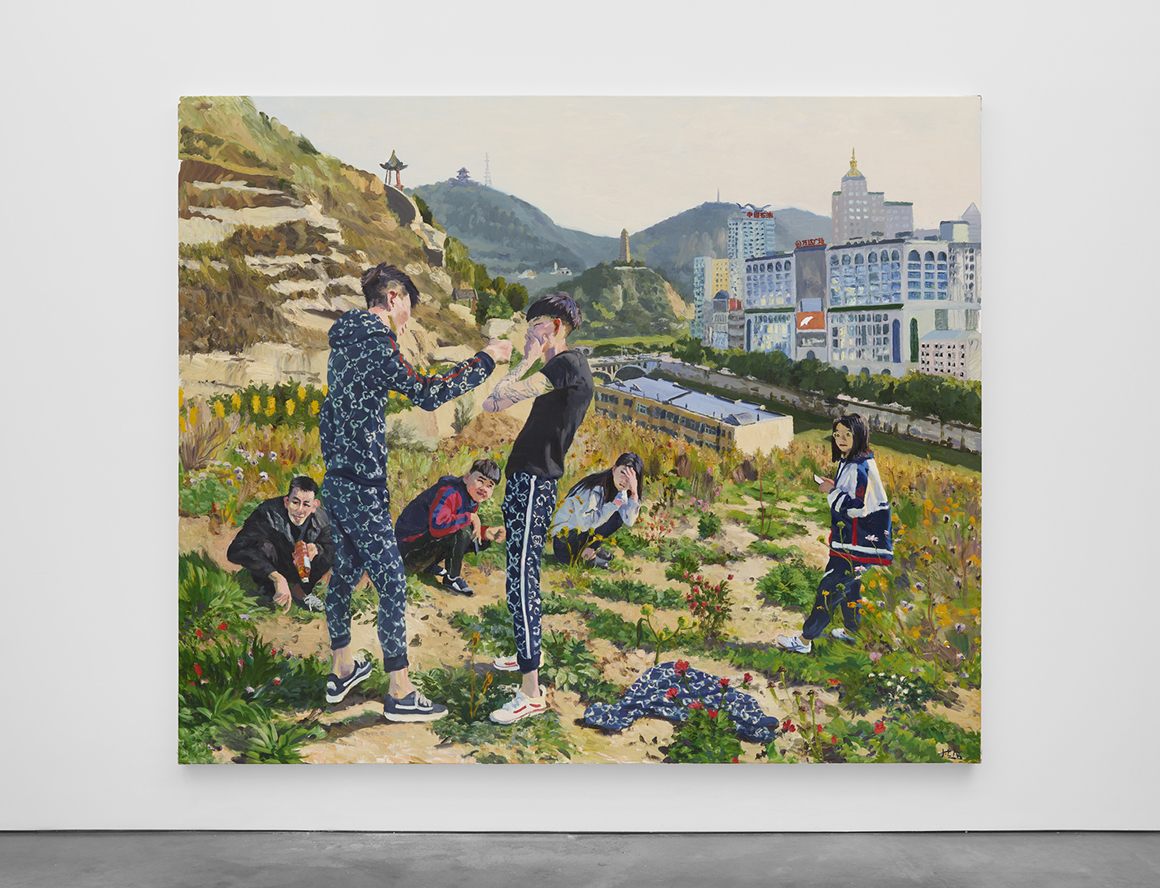