"Kapoor is an artist who takes you to the edge": The Guardian

Interview: Anish Kapoor on vaginas, recovering from breakdown and his violent new work: ‘Freud would have a field day’
By Jonathan Jones

At 67, Anish Kapoor, with a knighthood, a Turner prize and a retrospective due at the Venice Biennale next year, appears determined to strip away his own artistic skin. Like Marsyas – the satyr flayed alive by Apollo, whose gory fate Kapoor once commemorated in a 150m-long, 10-storey-high sculpture – the artist is exposing his innards. That’s the only way to describe his latest works. One of the world’s most renowned sculptors is about to go public as, well, a painter. Yet it is the content of the works he’s about to unveil that may disconcert. “They’re very, very violent,” he confesses. “And I just wonder what the hell that has to do with what’s in me. I can’t sit here and psychoanalyse them. I don’t know how to. But I recognise that it’s there.”

Kapoor’s paintings are not so far from his sculpture after all. Since the 1980s, he has used colour to release the cosmic and the inward – from early works, in which he scattered raw pigment on small objects, to Descent into Limbo, a 2.5m deep hole painted with a black so dark the drop seems infinite (and into which one gallerygoer fell). “Colour is deeply illusionistic,” he says. “Deep space is something I’m constantly in conversation with – the way colour affects deep space, in ways that are indescribable with words.”

In his studio, among the bloody canvases, is a black lozenge on a white background, encased in a glass tank. He asks me what I think it is. One thing I am sure of – it’s flat. Then he gets me to look from the side. It’s not flat at all: it bulges out into space, a solid diamond form. The optical illusion is mind-blowing. “So this is one of these new works made in the blackest material in the universe,” he says. “It’s in a case because the material is highly toxic and it’s incredibly fragile, especially to saliva, so you can’t talk in front of it. It’s a nano material. And what happens is the light enters and basically it’s trapped and doesn’t escape.”

The entire row is daft, for Kapoor’s actual black nano material is dangerous, difficult to use and has taken years to develop into artworks. He shows me 19 more of these freaky spatial illusions in an upper room of his studio. Next year they will be unveiled at the Venice Accademia show. They take a lifetime’s colour research to a sublime extreme. Is it a cliche to ask if this fascination with colour was influenced by his childhood in India? “I think some of my relationship to colour has to be cultural. This propensity for red has to have something of that. I think of Picasso and his relation to his Spanish roots. They were with him always – the dark mythological forces playing away”.

In fact, when I push him to explain how his gory canvases reflect his own psyche, as opposed to anthropological ideas, he comes out with a moving story about India, displacement and the healing power of ritual. “I grew up in India,” he says. “I was there until I was 17, 18. My mother was Jewish, so my brother and I then went to Israel. And I had the most awful, terrible nervous breakdown. I could hardly walk. I had an aunt who lived in Israel and my mother came to visit me. And my aunt, who had a kind of shamanistic predilection, said to my mother, ‘You must go back to India and you must bring some earth and you must put it under Anish’s bed.’ Sorry Jonathan, this sometimes makes me want to cry. But anyway, I’ll tell you it. And so my mother, bless her, went to India and got some earth and put it under my bed, and my aunt said further, ‘He will be able to dream himself well from this matter.’ Wow! You know it took me years to recognise the power of this thing. It gives me goosebumps. Sorry, but it does give me goosebumps.”

Kapoor is an artist who takes you to the edge. He can make you contemplate the biggest questions. His new paintings are not so much a departure as a key to everything he has ever done, ransacking religion and myth to ask why human beings have always been driven to ponder the mystery of being. “I’ve been in Buddhist practice for a long, long time,” he says. “Zen practice. It matters to me. I do really believe that we are religious beings. Where do I come from? Who am I? What am I? Where do I go? Those are questions that puzzle us all.”

Read the full interview in The Guardian. 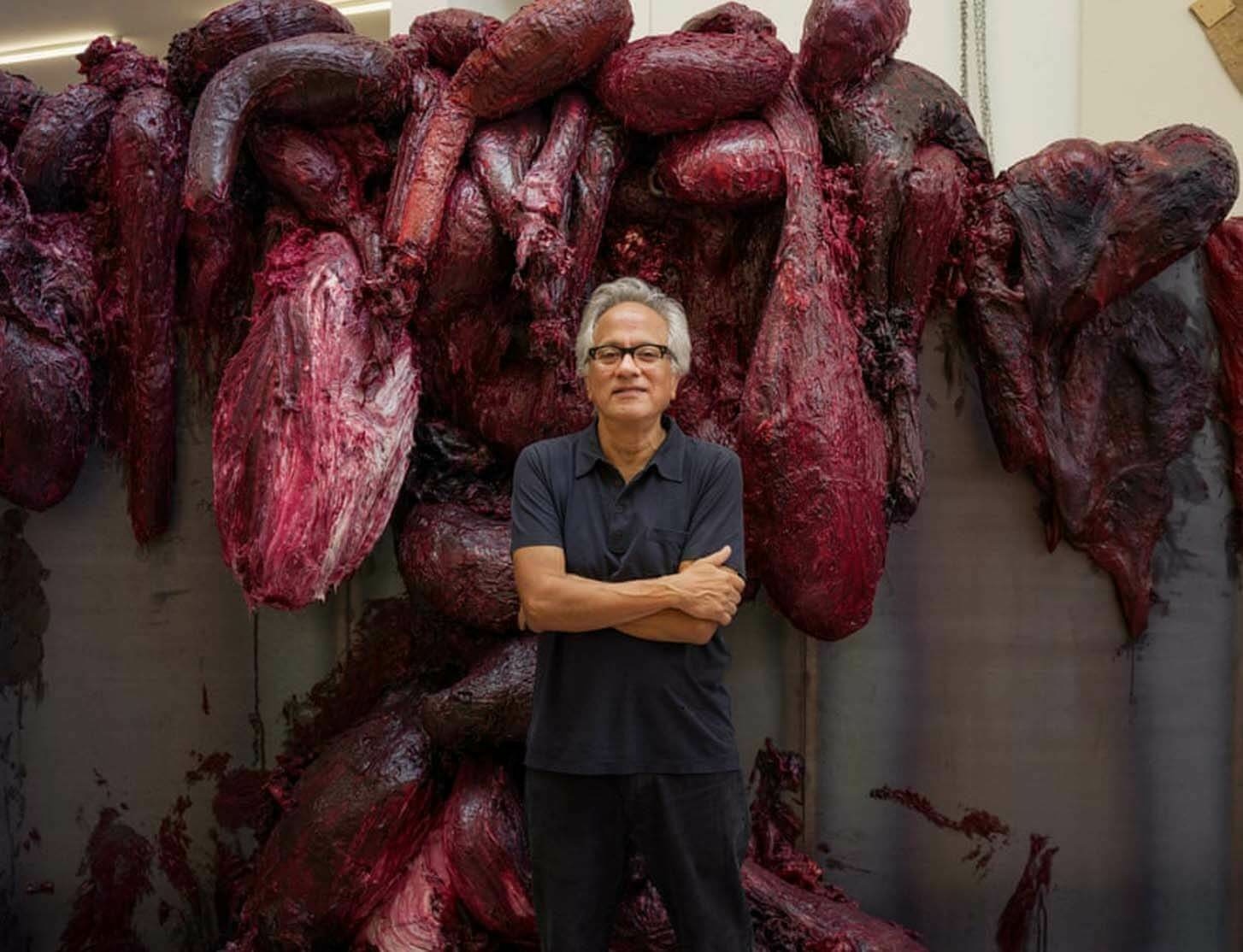