'In the studio with Christopher Le Brun' - Apollo Magazine

The British artist works across painting, sculpture and print. While his work often incorporates a wide range of visual, musical and literary sources, he believes in the pleasure of painting for its own sake and is led by intuition, colour, movement and texture. ‘There aren’t any reasons for painting. That’s what’s special about it. It doesn’t need justification. It’s essential that it’s not used for other purposes. All of the things which will, as it were, take away from what’s mysterious about it,’ he has said. His work is currently the subject of a solo exhibition titled ‘Momentarium’ at Lisson Gallery in London, until 20 August.

I do and it’s possibly quite odd. I come into the studio looking at the ground and I make my way round to where my latest painting is by looking at the floor.What I’m trying to do is to catch it unawares so that I can get a first impression. When a painting is too familiar, I can’t see it as an object so that’s what I do every day: I try to surprise them.

Other than that, my routine is fairly regular. The main issue for me is that it takes me a long time to warm up, which means that even if I start painting in the morning, I’m probably not getting to where I want until late afternoon or early evening. It’s a bit like being a fisherman: as soon as you take the fly off the water, a fish is bound to jump. You have to keep the fly on the water. Increasingly what interests me most about painting is the bit I can’t, at will, get at: inspiration. I know that’s a complicated word, but I’ve experienced it intensely in my life and I’m always hunting it, always, always.

Does that mean that you work late into the night?

Sometimes. If I find myself in that place, I try to keep going for as long as I can, before I get too hungry or keel over with exhaustion, but it’s very elusive. You never quite know when inspiration is coming. The only way is to prepare the ground by working.

Do you listen to anything while you’re working?

I do unless I forget to because I’m so wrapped up in the painting. I spent most of my life listening to Radio 3 until Spotify came along. Now Spotify competes with Radio 3. Generally, I start with what you might call serious or difficult music and as the day goes on, it tends to become more rhythmic or jazzy, but it depends.

How messy is your studio?

Well, there are several parts to the studio. The painting part is very messy and relatively disorderly, and then the other part, where my studio staff work, is very clean and tidy. When I think I’ve got a painting near completion, I take it into the clean space and look at it there as if it were in a gallery. Mostly, the painting isn’t quite good enough, so it goes back into the messy part for more work. I find having those two different types of space very helpful.

Do you pin up images of other artists’ work?

A little bit. I’ve got a self-portrait by Reynolds. I also feel very strongly about Blake. Blake and Reynolds didn’t get on, but I like them both. I’ve got an illustration of a painting by [Jacques-Louis] David on Anita Brookner’s monograph, and a postcard of a wonderful desert line by Richard Long, which makes me think of far away. Oh, also The Wood on the Hill (Wittenham Clumps) by Paul Nash. I love Paul Nash.

What’s the strangest object in your studio?

Probably me. Apart from that, I’ve got a block of lapis lazuli, which was brought back from Kabul. Whenever I look at this beautiful thing, I think of the mountains of Afghanistan and I also think of Titian, the wonderful blue sky in Bacchus and Ariadne. It’s a strange object, but it’s full of meaning for art.

Which artistic tool could you least do without?

A big palette knife as I spend so much time drawing with it or scraping paint off the canvas and onto the floor.

Christopher Le Brun: Momentarium is on view at Lisson Gallery London through 20 August. 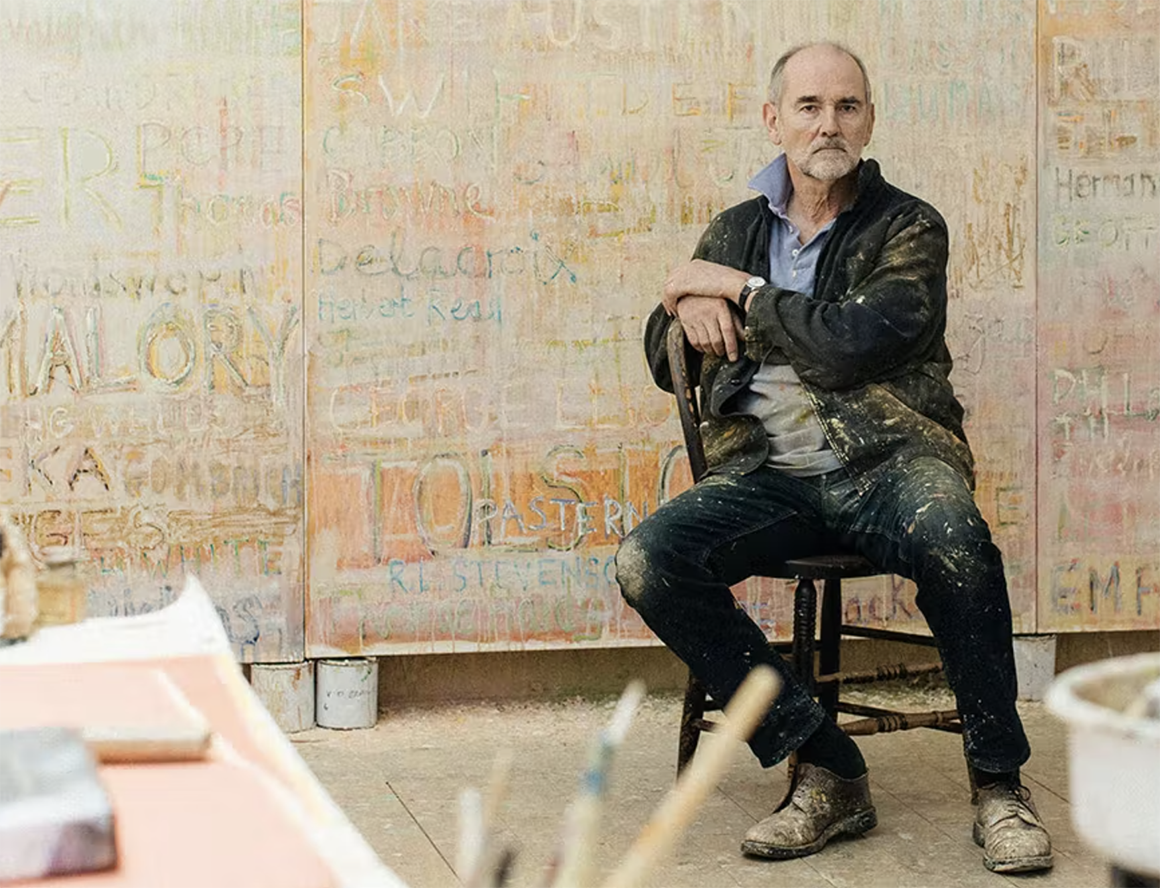