Sculptor Hugh Hayden has enjoyed quick success, his work interrogating the idea of the American dream, often symbolized through the kitchen table, to explore class, aspiration, and the African origins of American cuisine, especially in the South. Hayden's strength lies in his skillfull use of wood – specific types of which he often sources from particular places for their cultural and historical import – as both material and symbol. His exhibition here, titled after his pet name, "Huey", drew on memories of his Texas upbringing to tackle the knotty subject of African American childhood through sculptures poised between indoctrination and imagination, discipline and play.

The show was divided into three spaces, each referring to a different section of a church. Six salvaged pews and a school desk filled the sanctuary, all carefully reupholstered with chemical cleaning brushes, the pews an eye-catching red. A pair of hairbrushes and a comb, each with a menacing steel blade in place of a handle, were affixed ot the far wall. Making up a series titled "Good Hair" (all works 2021), the modified seating acknowledged the role that institutions such as church and school play in establishing and enforcing standards of appearance, while the objects, somehwat heavy-handedly, implied the violence of such disciplinary regimes. A chapel-like second room tackled the oversize role that athletic excellence plays in narratives of Black masculinity through a half dozen wall-mounted basketball hoops woven out of rattan and other materials. One of these, Huey, was inspired by the iconic 1960s poster of Black Panther cofounder Huey P. Newton enthroned on a wicker peacock chair, an image whose popularity made that item of furniture a familiar fixture in African American house-holds. Hayden re-created its oversize back as a backboard, weaving the logos of Nike, Under Armour, and Umbro into the frame. Another work, Fruity, is unexpectedly pink the rattan strips stained with Gatorade. In Rapunzel, the net, woven out of synthetic blond hair, is more than six feet long and just skimmed the floor. A number of these pieces ref-erenced fairy-tale characters in their titles, perhaps suggesting that those seeking success and communal upliftment via sports might be engaging in wishful thinking.

In a minimally lit all-black crypt, Hayden presented a set of ebony sculptures, interrogating the material as a signifier of African American excellence. Some pieces directly referenced the history of slavery: A spinning wheel acknowledged the central role of cotton, while an antiquated chair recalled the plan-tation. Scrupulously handcrafted by Hayden, Lincoln Logs resem-bled a cabin constructed from the eponymous building blocks, which were invented a century ago. The toy originally came with instruc-tions on how to build dwellings that belonged to both the slavery-abolishing president Abraham Lincoln and the literary Uncle Tom, a figure who has become shorthand in African American vernacular for “a sellout.” This idea of racial compromise and economic success rippled through other work. Uncle Phil is a gavel named after the avuncular judge from the 1990s sitcom The Fresh Prince of Bel-Air, a humorous take on class tensions between urban and suburban African Americans. An uncanny replica of a gourmet chocolate bar, To be titled, was care-fully ensconced in its half-open wrapper, which reads “100% cocoa.” 110% Cocoa, a slanted door whose inset panels mimic the chocolate bar’s grid, leaned next to it. The visual distortion and the numerical excess of its title seem to parody the desire for an authentic Blackness. Talented and Gifted/Passing, a conjoined pair of school desks, dra-matized this tension. The left one, sculpted from lighter sapwood, leans back, winning a tug-of-war against the one on the right, made from the more familiar black heartwood. Visualizing a hierarchy based on skin tone, it questions whether achievement and success truly shield one from racial prejudice. Emphasizing ebony’s many subtle hues, these disparate objects brilliantly complicated any monolithic view of Blackness.

Though mostly invisible in the final work, some unconventional materials were mentioned in the checklist: cocoa butter, Gatorade, Neosporin, Tiger Balm, tung oil. Many are restorative substances, pro-viding nourishment and healing to an exhausted or injured body. If Hayden’s sculptures may be read as metonyms for the African American body, then the gesture of anointing them with such emollients quietly acknowledges the heroic effort and debilitating cost of growing up Black in America.

Visit Artforum.com to order your copy and read the full review by Murtaza Vali. 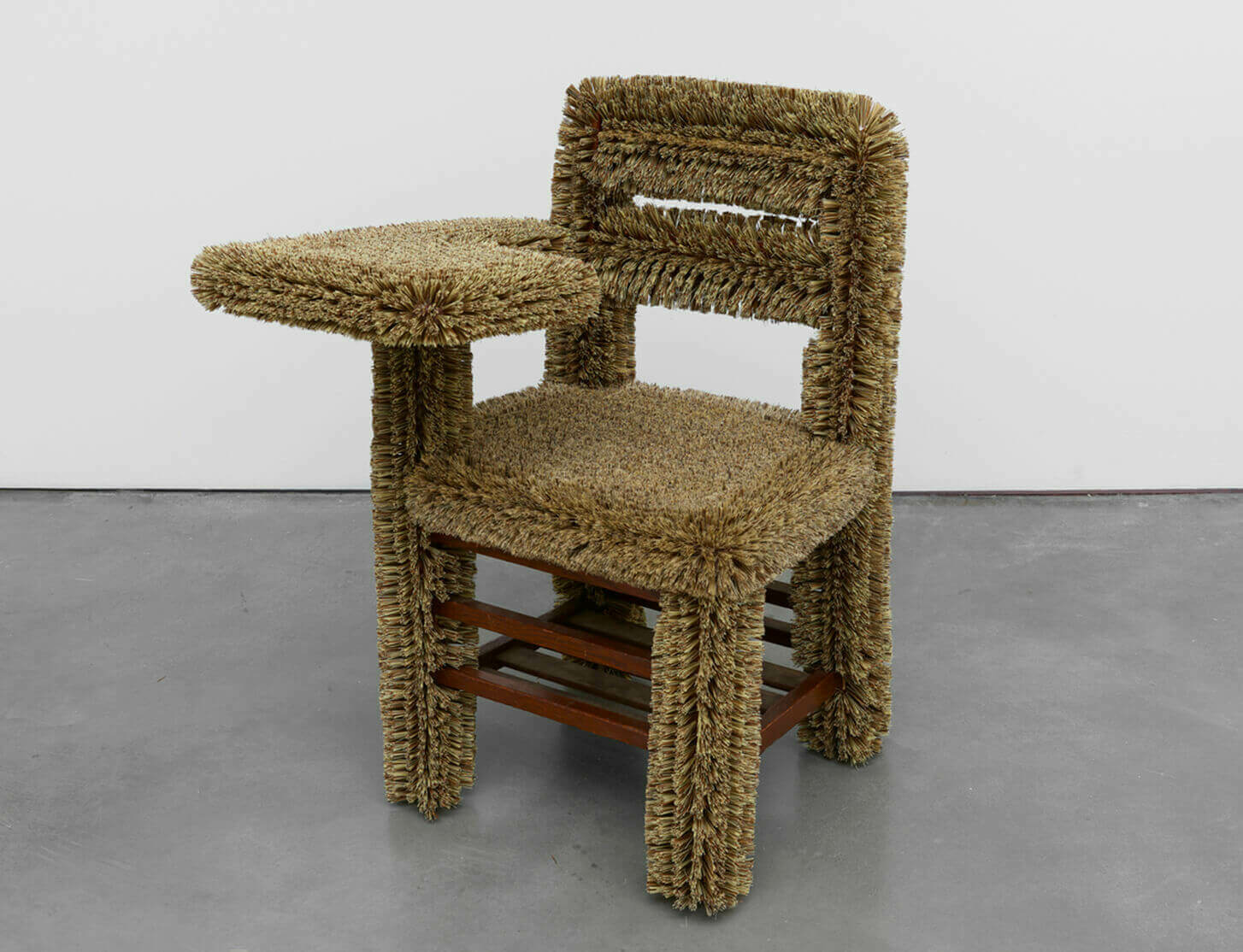