The story of the past 25 years of digital art is the story of a series of booms and busts, of peaks and valleys, and of gatekeepers attempting to make sense of alien forms, then losing interest, then perking up again just as another wave comes crashing in. From the dot com frenzy of the late 1990s to the nebulously defined Post-Internet moment of the 2010s, to the current NFT craze, digital art’s role within culture—much like the internet as a whole—has always been in flux.

Throughout these cycles, the work of the Netherlands-based collective JODI and the artist Cory Arcangel has remained constant—both online and off; in and beyond institutional walls. JODI was formed by artist couple Joan Heemskerk and Dirk Paesmans in 1995. Though their body of work is massive, JODI is perhaps best known for their website which, 25 years removed from its launch, remains a singular piece of cryptic, code-filled internet art—early on, a rumor spread that visiting it would give the user’s computer a virus (untrue). Arcangel’s roots are in turn-of-the-century net art and music, but he has been able to interject a certain accessibility and art historical awareness into his work that has helped him fully penetrate establishment contexts. In 2011 at the age of 33, Arcangel was the youngest artist to stage a full-floor solo exhibition at the Whitney, where he showed everything from gradient prints created using a stock Photoshop tool, to a series of bowling video games hacked so that they only threw gutter balls. For their presentation at this year’s Independent Art Fair, Lisson Gallery will show an exhibition of work from artists who have known each other for nearly twenty years and whose work collectively spans multiple generations of art on and about computers.

One major focal point of the exhibition is Chameleon, a four-channel video taken from a series of 256 NFTs created by Joan Heemskerk of JODI. NFT is short for non-fungible token, and refers to a file on the blockchain that is used to confirm the uniqueness of a given digital asset, usually purchased with cryptocurrency. An NFT can be anything from an image to an in-game item to a concert ticket; and its connection to the world of crypto has led to unprecedented values within digital art. On March 11, 2021, an NFT by the digital artist Beeple (real name: Mike Winkelmann) was sold for $69 million at Christie’s, making him the third most valuable living artist, behind only Koons and Hockney.

During a recent Zoom interview with Heemskerk and Arcangel, both artists told me that they have received a massive amount of email attention this year in the wake of the NFT boom—Heemskerk told me that her email has been “red hot,” while Arcangel says that his inbox feels “like it was hit by a tidal wave.” Though JODI was originally hesitant about entering into the space, a groundbreaking NFT virus artwork by the artist—and former JODI assistant—Billy Rennekamp opened up Heemskerk’s eyes to the potentiality of the form. “It’s more about coding in NFT space,” she says, of her interest. “As an observer of that whole system, I thought, OK, maybe I can reduce it because all I saw were these wallet hexadecimal numbers.”

The result of this line of inquisition is a generative audio and video piece that changes every time the NFT’s owner changes hands. Using a 16-bit computer engine, it flashes colors and blips out chiptune audio associated with the buyer’s unique crypto wallet number, which scrolls at the bottom of the video. So: different buyer, different wallet number, different sequence of color and sound. With its primitive computer aesthetics and focus on the data that drives the technology, Chameleon falls squarely in line with JODI’s larger interests, which have always included a bit of an antagonistic relationship with the user. To that end, with a random chance of six some of the Chameleon’s 256 NFTs have the phrase GAME OVER printed in the middle of its screen, which cannot be erased.

During our interview, Arcangel remarked that viewing Chameleon led him to recall the first JODI performance he witnessed, in 2002, at the opening night of the ArtFutura festival in Barcelona. The performance saw Paesmans in solo mode, as Heemskerk was home with a newborn. JODI played a modified version of the 1980s videogame Jet Set Willy, projected large and with the volume turned up really loud. “It was the first time I’d ever seen somebody clear a hall. Like, really clear the audience out of a performance,” Arcangel says. “I had these flashbacks a little bit.”

Though video games are a through line in both artists’ practices—in addition to those bowling games, Arcangel famously hacked a Super Mario Brothers cartridge to remove everything except for its scrolling clouds; as early as 1999, JODI was making modified versions of games including Wolfenstein 3D, a first-person shooter that climaxes in a battle with a robotic version of Hitler—they are absent from the Independent exhibition, save for Chameleon. Arcangel’s 2003 work Data Diaries is included, though, on special request from Paesmans. “I don’t even know if Dirk knew what Data Diaries was, I think he just liked the title,” Arcangel says of the online work, originally commissioned by the website turbulence.org.

It makes sense. Data Diaries is quite possibly the artist’s most JODI-esque work. For every day in January of 2003, Arcangel scraped data from the RAM chip on his computer and put it into Quicktime, which spit out a series of 62 11-minute-long videos that were at once colorful and scrambled. They had a self-generated, noisy soundtrack to match. “That’s very JODI influenced, absolutely 100 percent,” Arcangel notes, before commenting that, at the time, “my mind was in that space—trying to process what they had done and what I wanted to do or was doing.”

Data factors heavily into another JODI work in the exhibition, The Backdoor, which was originally presented in 1995/1996 as a log from a 1993 session by the hacker Kevin Mitnick. The version of the piece at Independent uses a large-scale LED screen to display scrolling server logs and behind-the-scenes code. Arcangel’s facebook, ford, pontifex, fujitsu totem, also on view, deals with data of a more contemporary sort: a vertical stack of screens plays recordings of various Twitter feeds starting with the letter F–Ford, Fijitsu, Pope Francis—that are scrolled and liked by a programmed bot until the feed ceases to reload. When compared, the two pieces indicate a generational divergence: if The Backdoor is the transparent documentation of code blown up to somewhat heroic scale, F Totem is the rather banal account of a robot on social media, combing their way through various brands, multinational corporations and religious icons.

Arcangel’s third piece in the exhibition, Permanent Vacation, also deals with automation. It’s a reconfigured work from 2007 in which two contemporary iMacs fire off ‘out of office’ emails to each other in a continuous loop until their inboxes either fill up or crash. Permanent Vacation takes cues from the net art playbook—both inboxes are filled with dense, hypnotically repeating text—but focuses that impulse into a singular, understandable gesture with definite art historical precedent. The piece’s use of a feedback loop is reminiscent of the work of pioneering video artist Nam June Paik. As it happens, Paesmans studied with the artist at Kunstakademie in Dusseldorf and Heemskerk tells me that JODI staged a performance around a decade ago at the Nam June Paik Art Center in Seoul that involved LED lights – the beginning of a practice that they are continuing with The Backdoor. (Connections abound in this exhibition. For one, it is fitting that desktop computers are included, as Arcangel used to look at JODI’s work in the computer lab at Oberlin College, where he received a BM from the school’s Conservatory of Music. Early JODI material was made in labs because, according to Heemskerk, “We couldn’t afford computers.”)

The automation featured in the two aforementioned Arcangel works is in contrast to the classic JODI piece 404, which uses an error page as the jumping off point for a website that is interactive, sure, but only in the most frustrating—or amusing, or both—way imaginable. Much like the collective’s larger website, the piece takes the user on a confusing journey through text and code—the bottom of one particularly chaotic page is just the phrase “W3lc()m3 t() h3ll” over and over again. That this piece will act as a guestbook of sorts during the fair is classic JODI, who despite their many accomplishments, have for the most part shied away from the gallery system proper. “We were always underground, we went to festivals and we got grants,” Heemskerk says. “Blue chip galleries—they don’t know much about our work. In that sense, it’s also exciting,” she continues, talking about the collective’s inclusion in Independent. “What do they think about it?”

Interview by John Chiaverina for the Independent OVR 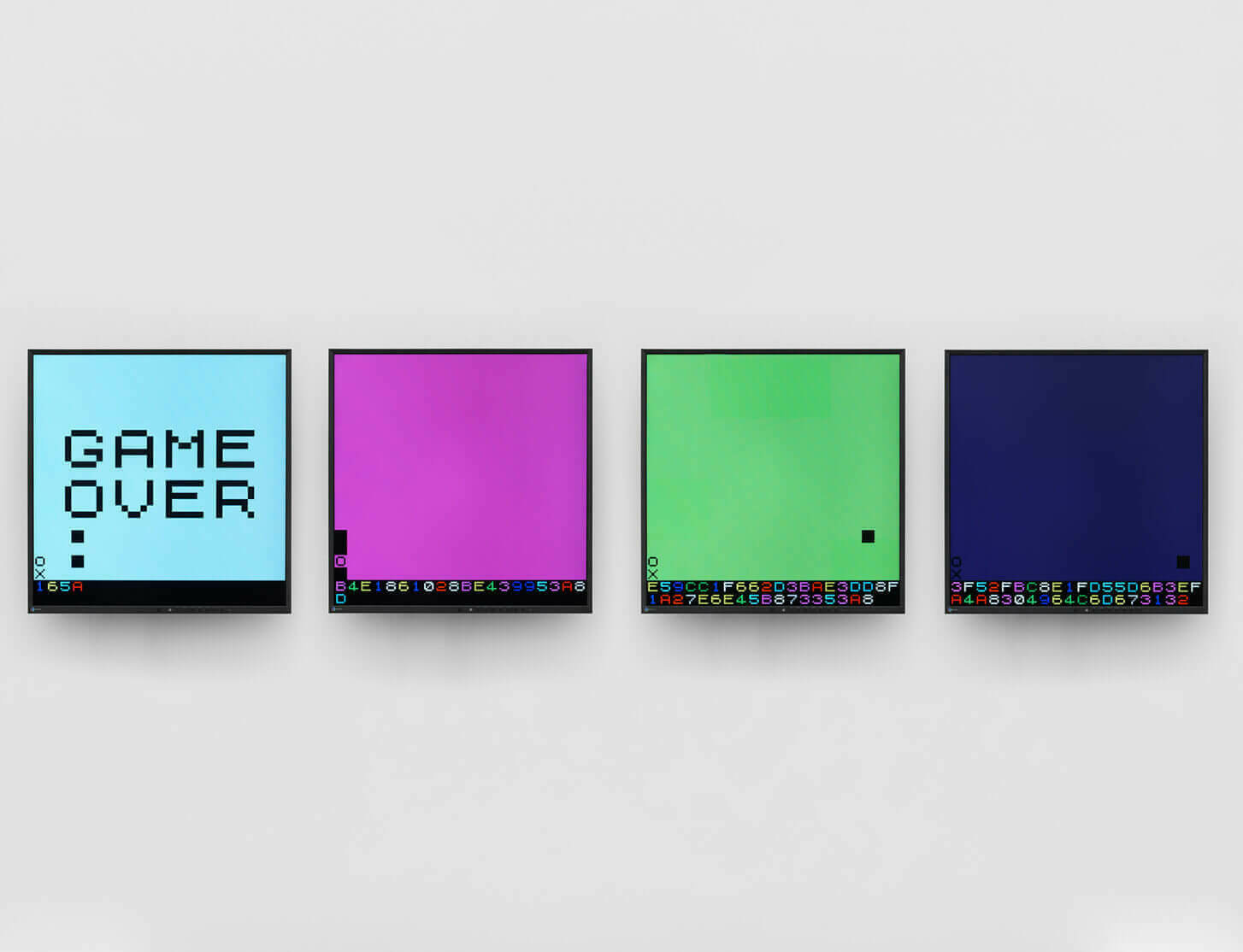