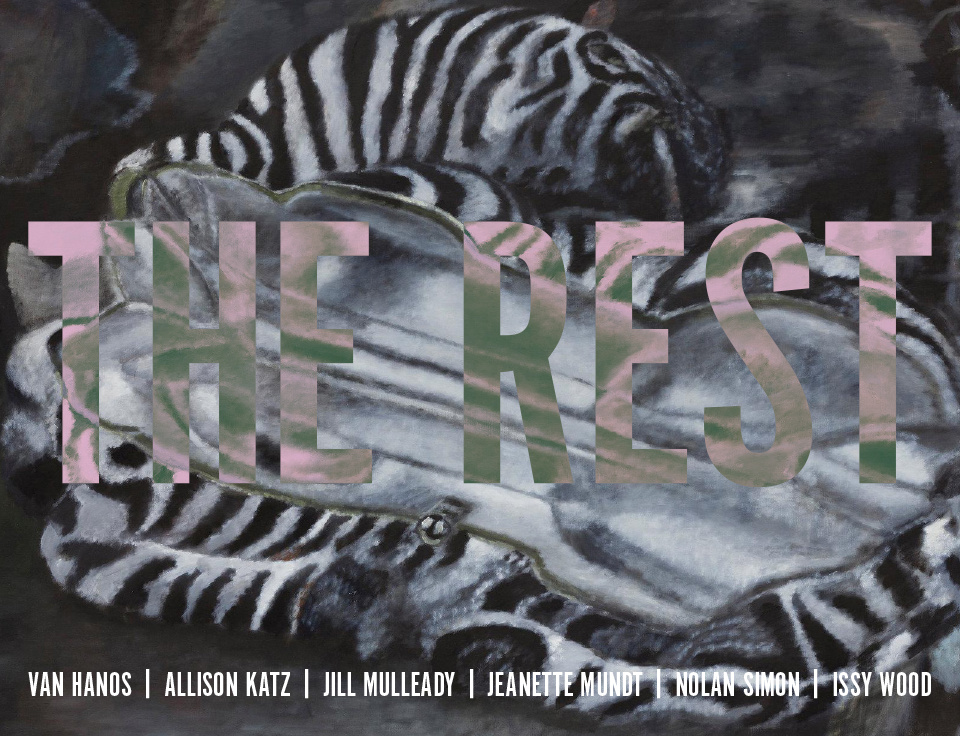 Lisson Gallery is pleased to present ‘The Rest’, a group exhibition exploring a generation of artists that employ figurative painting as well as concomitantly capricious and complex approaches to image making, featuring the work of Van Hanos, Allison Katz, Jill Mulleady, Jeanette Mundt, Nolan Simon and Issy Wood. In an era when images are created and exchanged without premeditation or hesitation, and reproductions are ubiquitous, the artists in the show destabilize traditional notions of a singular aesthetic or artistic identity. Their use of imagery wrestles with the history of figuration, whether resuscitating historical trends to then thwart them, or finding altogether new avenues to engage. Their fresh approach to painting pushes our expectations while challenging the staid perceptions about representation and what the medium ‘should be’.

Van Hanos’s approach to painting is varied, united almost entirely by its stylistic unpredictability. Ranging from landscape to portraiture, recent work continues to explore perceptual shifts and thematic rupture. Portrait of our Mother as a Mountain (2018) represents two views of the same mountain range, one at sunrise and one at sunset, painted by Hanos during a camping trip in Big Bend National Park. Hanos recently relocated from New York to Marfa, Texas and here he depicts a section of the nearby Chisos Mountains described as the “The Window” for its views of the lowlands of Mexico. Painted as an homage to his mother, the mountains represent Hanos and his twin brother—united metaphorically despite their real-life physical distance—and its vivid, expressive colors evoke both the natural beauty and the raw emotion experienced in situ. Figure Eight (2018) portrays a similar reverence, however its blurred focus intentionally challenges any straightforward tribute to the nude couple depicted. The image is taken from an in-focus photograph, which Hanos then paints to appear in motion, creating a visual strain on the eye and an intriguing optical illusion. The viewer may attempt to move towards the painting for clarification, only to find it unavailable.

Allison Katz similarly avoids formal or factual coherence, instead using opposing tones and visual non-sequiturs across a single body of work. 21st of January, 2011 (2018) presents the view from the 20th floor of The Century on Central Park West in New York as seen in January 2011. This scene is the apartment owned by a friend of the artist with whom Katz stayed over a period of six months. By revisiting this cinematic outdoor terrace in four paintings over the past five years, the artist expresses a personal history and significance, however the origin or extent is left to the imagination of the viewer. Memory is further complicated by the depiction of dramatic architectural framing, culled from the Museum of Science and Technology in Shanghai.

There is an internal tension between reason and chaos in the work of Jill Mulleady, which as with the other artists in the show, conveys an alternative, dreamlike state. The subjects are shadowy figures, who conjure up troubled psychological imagery in an effort to exorcise inner drives. They appear transfixed in a deep-seated desire that is not altogether apparent, nor virtuous. In Touch me Not (2018) a Surrealist female figure contorts a sinewy body and an erect reptilian tongue in a suspended pose, hovering in mid-air. Scale-like leopard spots twist around the body, which the artist views as the intangible demands of life—covering one’s skin like a heavy coat.

Jeanette Mundt’s paintings in the exhibition are from a series of works featuring poppy flowers, the resin of which is used to make heroin. Works from the series reference the drug, as well as van Gogh’s paintings of the flower, a subject he used often in the last troubled years of his life. The paintings here feature a field of poppies in Mexico, an image retrieved from the internet. Mundt overlays the quotidian image with a drawn pattern of repeated poppies, hidden in which we can see a woman reclining sideways, asleep in the field. While the initial reaction might be a romantic notion of lazing in a field of flowers, the mood is sinister when considering the poppies’ psychoactive properties. As in all her work, Mundt’s loose, expressive brushstroke separates the image from straightforward appropriation, and familiar or historical images become unrecognizable from their original source material.

Large Kimono with Yoko at the Bar is part of a series of ‘cleavage’ paintings by Nolan Simon. Begun in 2013, these paintings take images the artist discovers on his social media feeds, which are then painted as if they were printed on garments, with part of the wearer’s chest exposed. The resulting image has an obvious formal composition, but upon further investigation reveals its underlying tableau. The backdrop image in this work is of a small child asleep next to a bar—a parental photo of a child’s innocence juxtaposed with flesh and breast. Nolan references the cleavage works as akin to the phrase “wearing your heart on your sleeve”, in which candid, private moments are revealed and become something to be proudly displayed.


The subject matter for Issy Wood paintings come directly from high-end fashion and auction catalogues, where objects of once personal significance to others are advertised for sale. Wood chooses to paint the objects which she desires and thus exercises her materialistic tendencies through their rendering. However, by adjusting the colors—the original image is often dramatically lit and placed upon stark white backgrounds and are instead painted here in muted, hazy tones of brown or grey—and by placing the contents slightly askew, the original is irrevocably altered. In The Rest (2018), which lends this group show its title, a Judith Leiber handbag is depicted lying open on its side and at this angle and palette its exterior zebra print gives the illusion of an animal in repose. Amenities! Python! The Artillery of Heaven! (2018) also features a high-end handbag that Wood at one point coveted. Sitting squarely in the foreground of the composition, the snakeskin purse appears as abstracted pattern. It is upon stepping away from the canvas that material possessions—perhaps the artist’s own or those of a neighbor—come into focus and we can see the juxtaposition of a Jan Jansen boot tilted onto its side, appearing to walk vertically across the canvas. 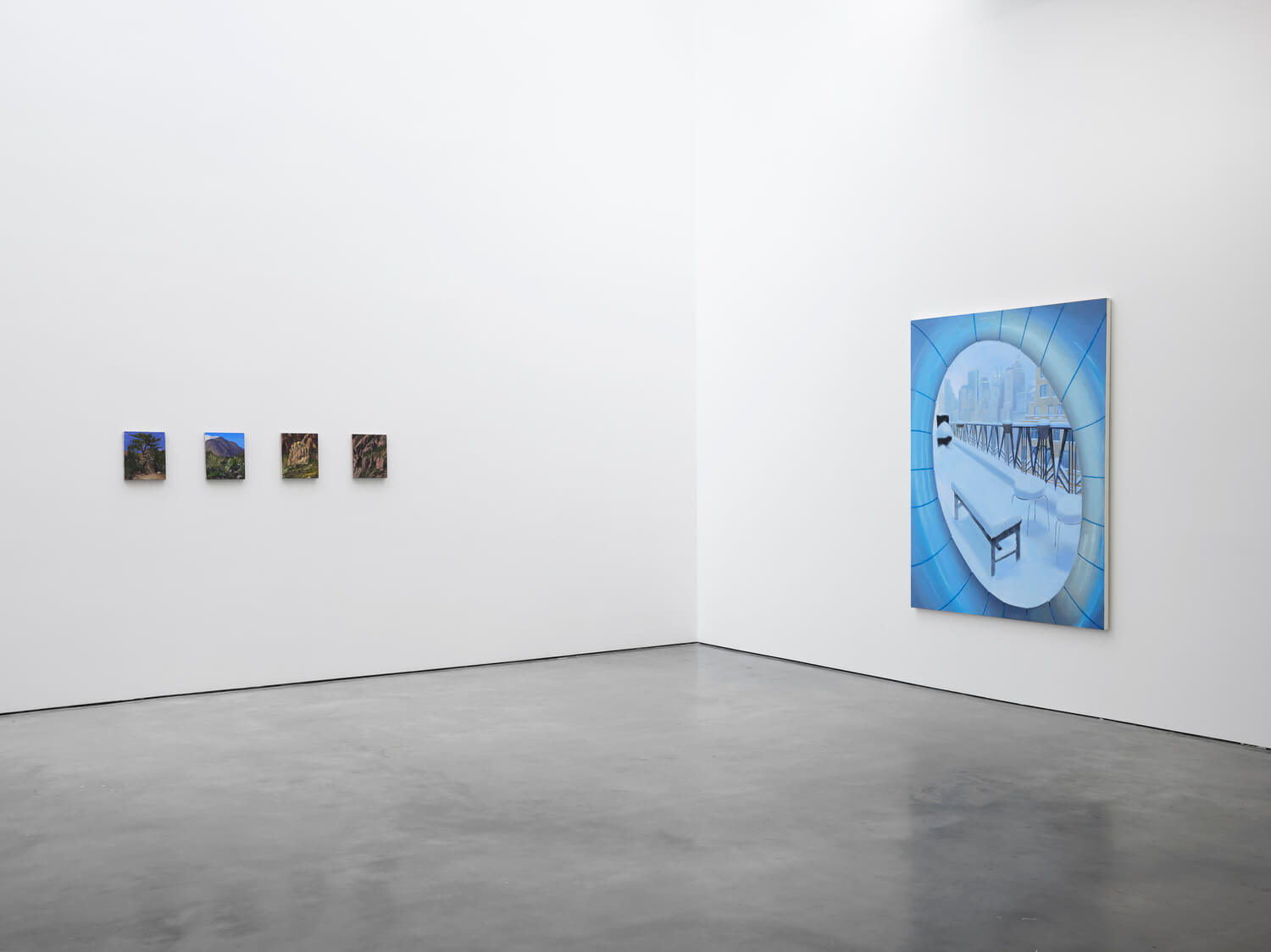 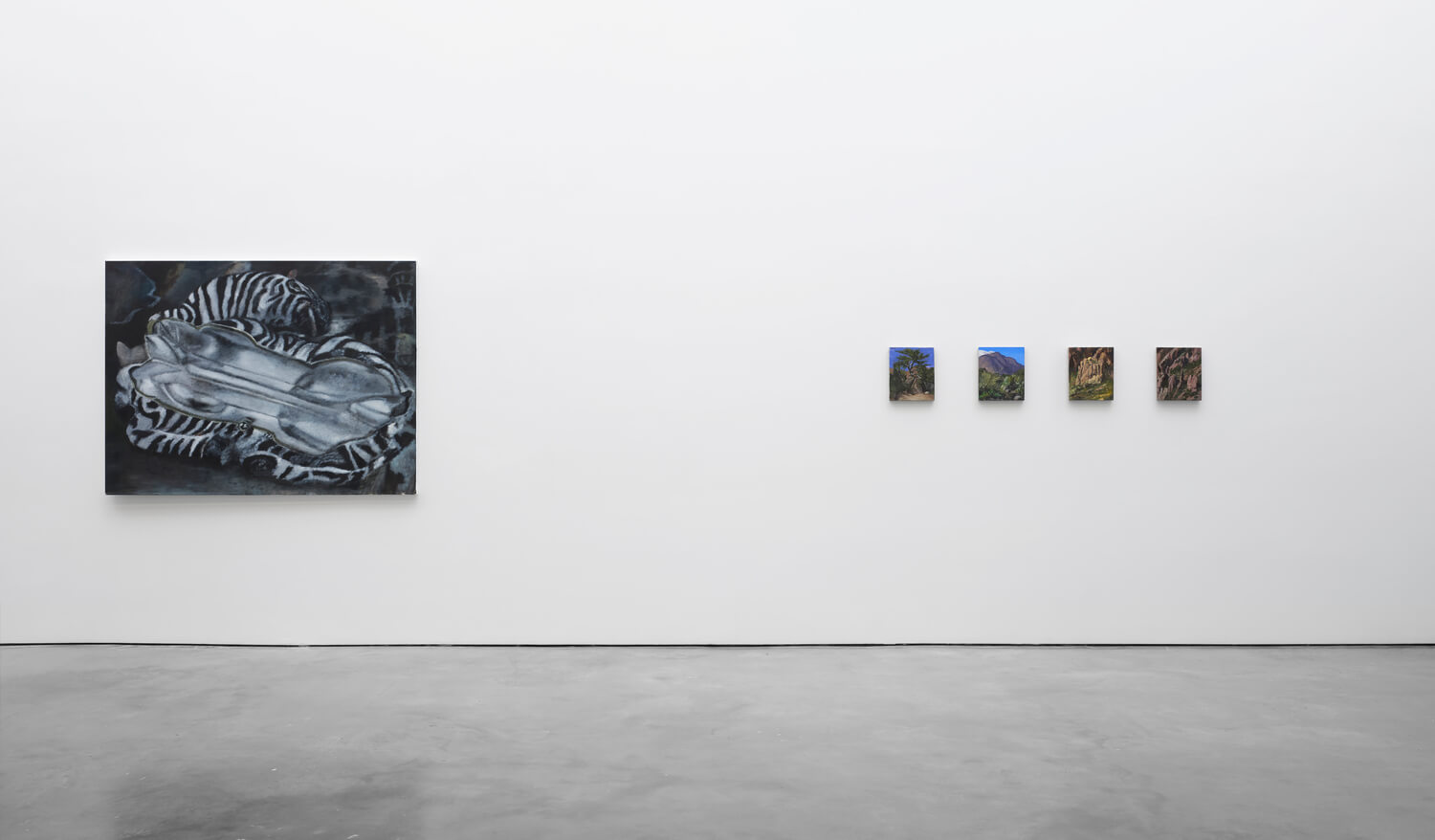 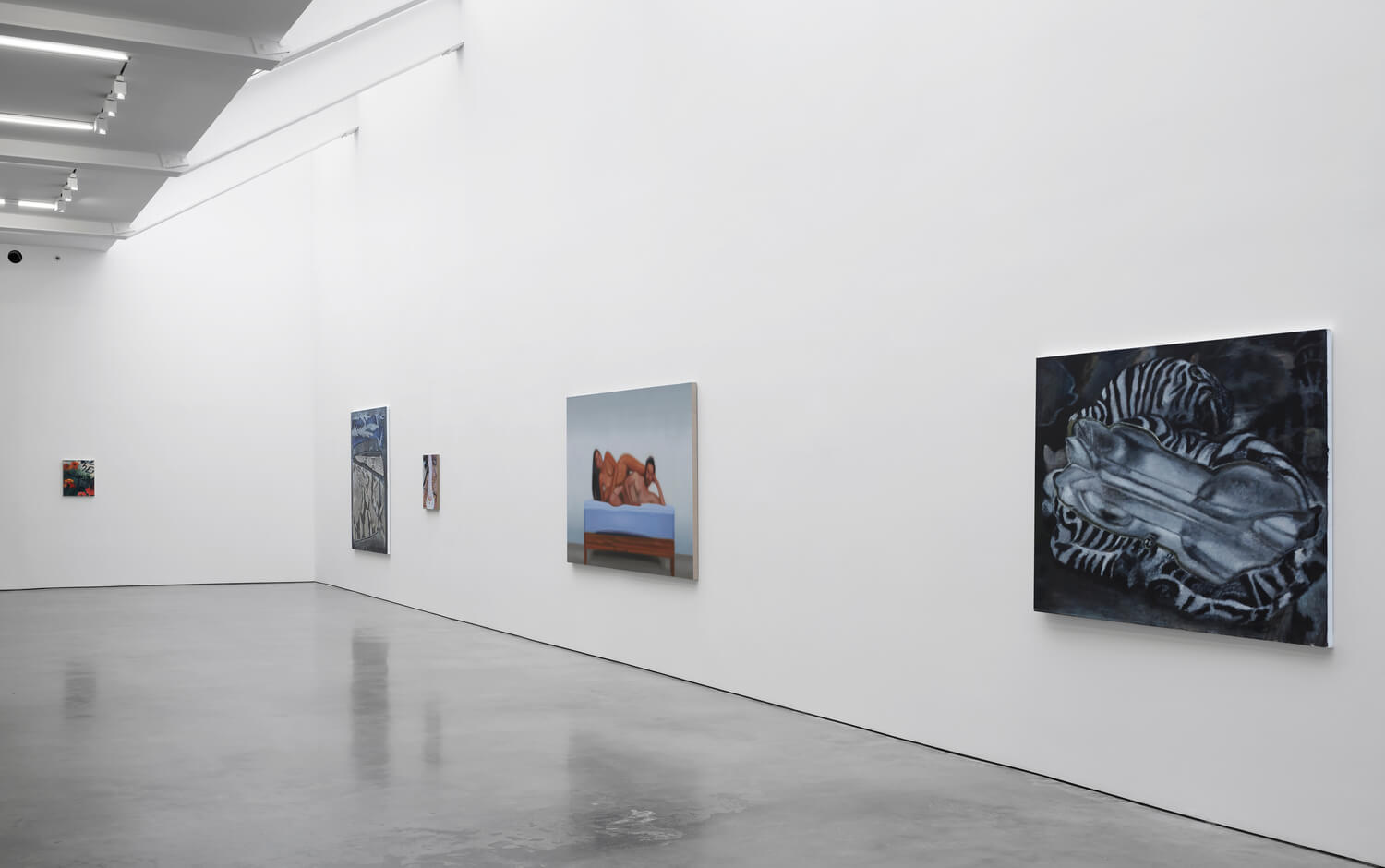 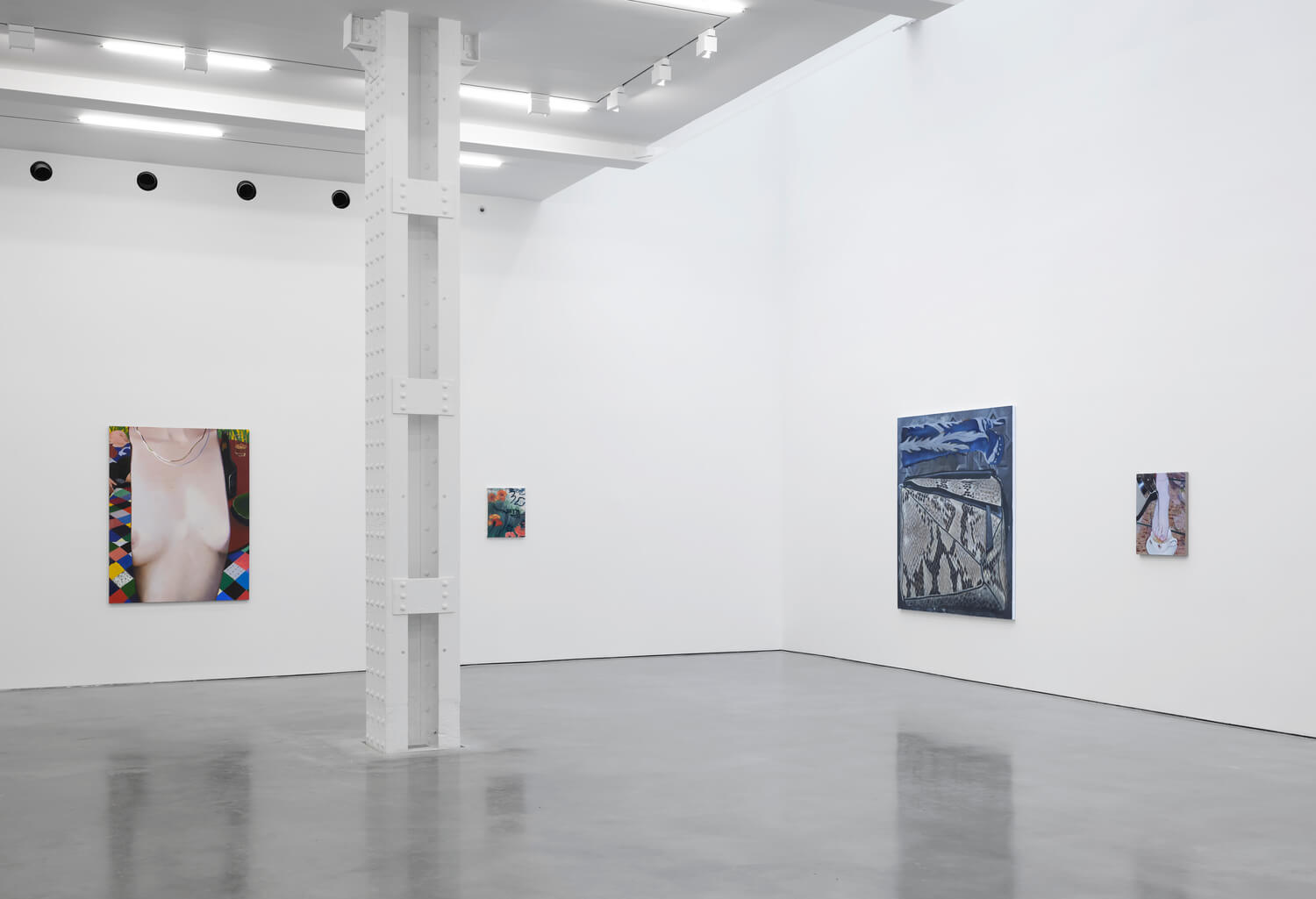 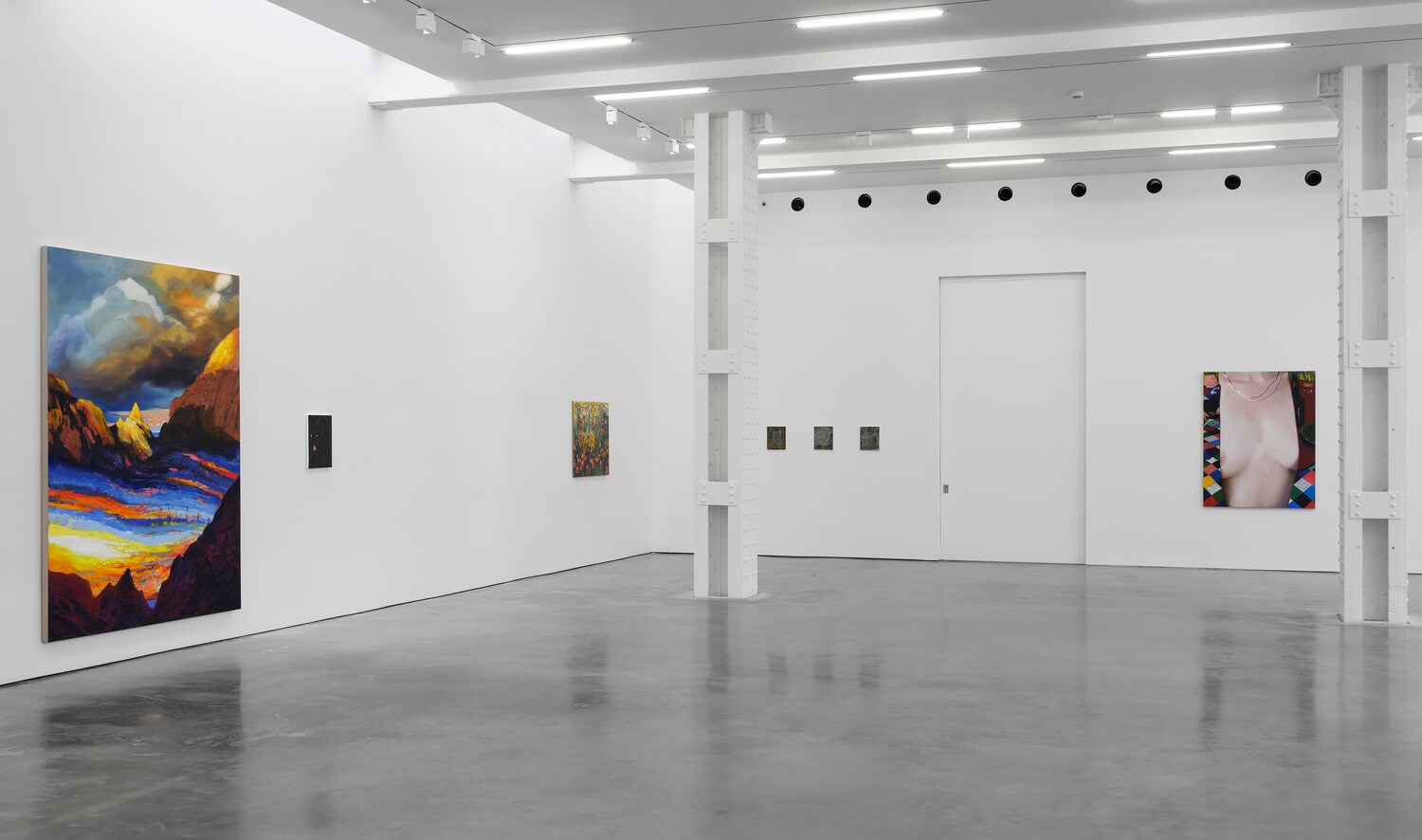 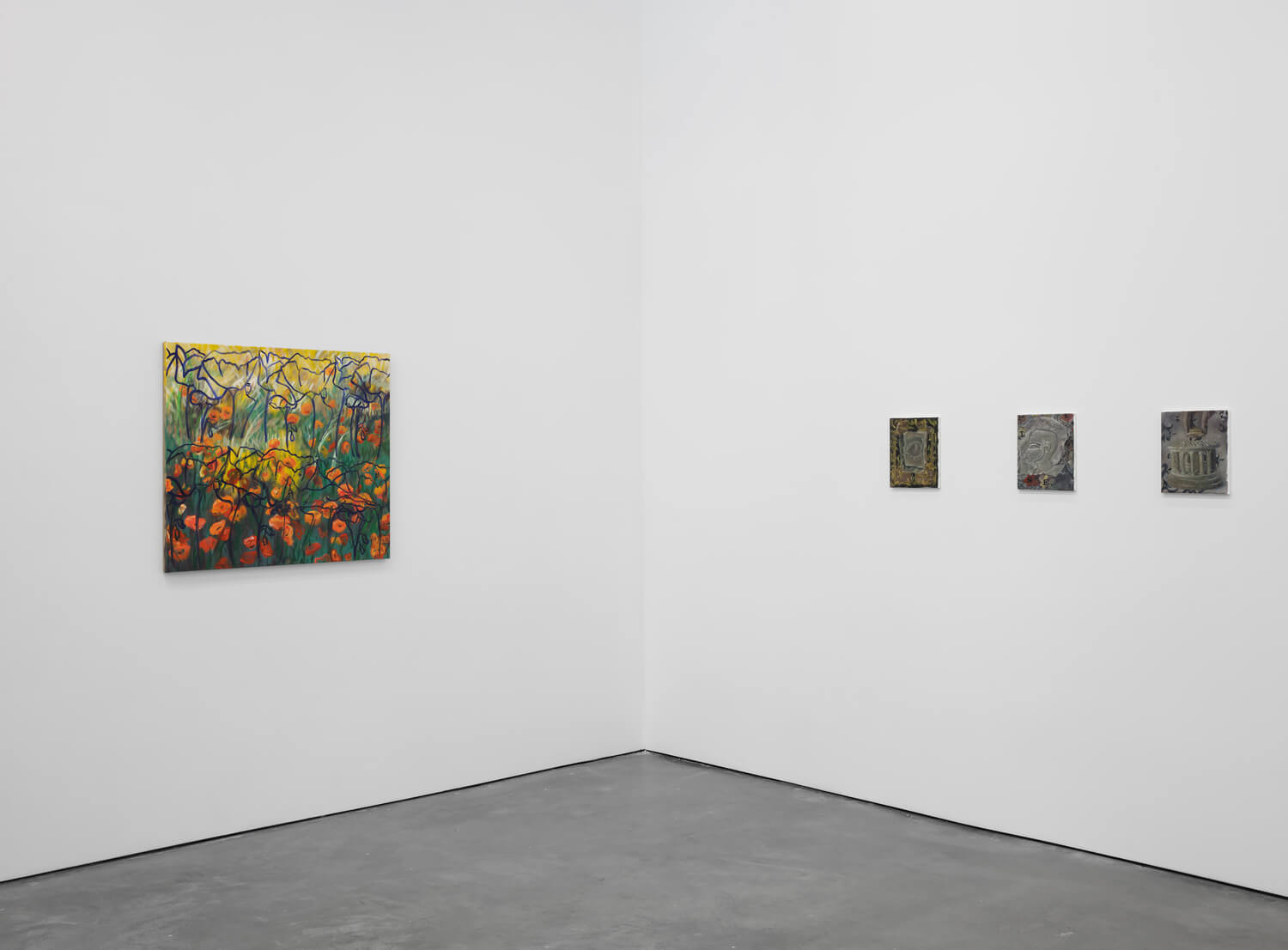 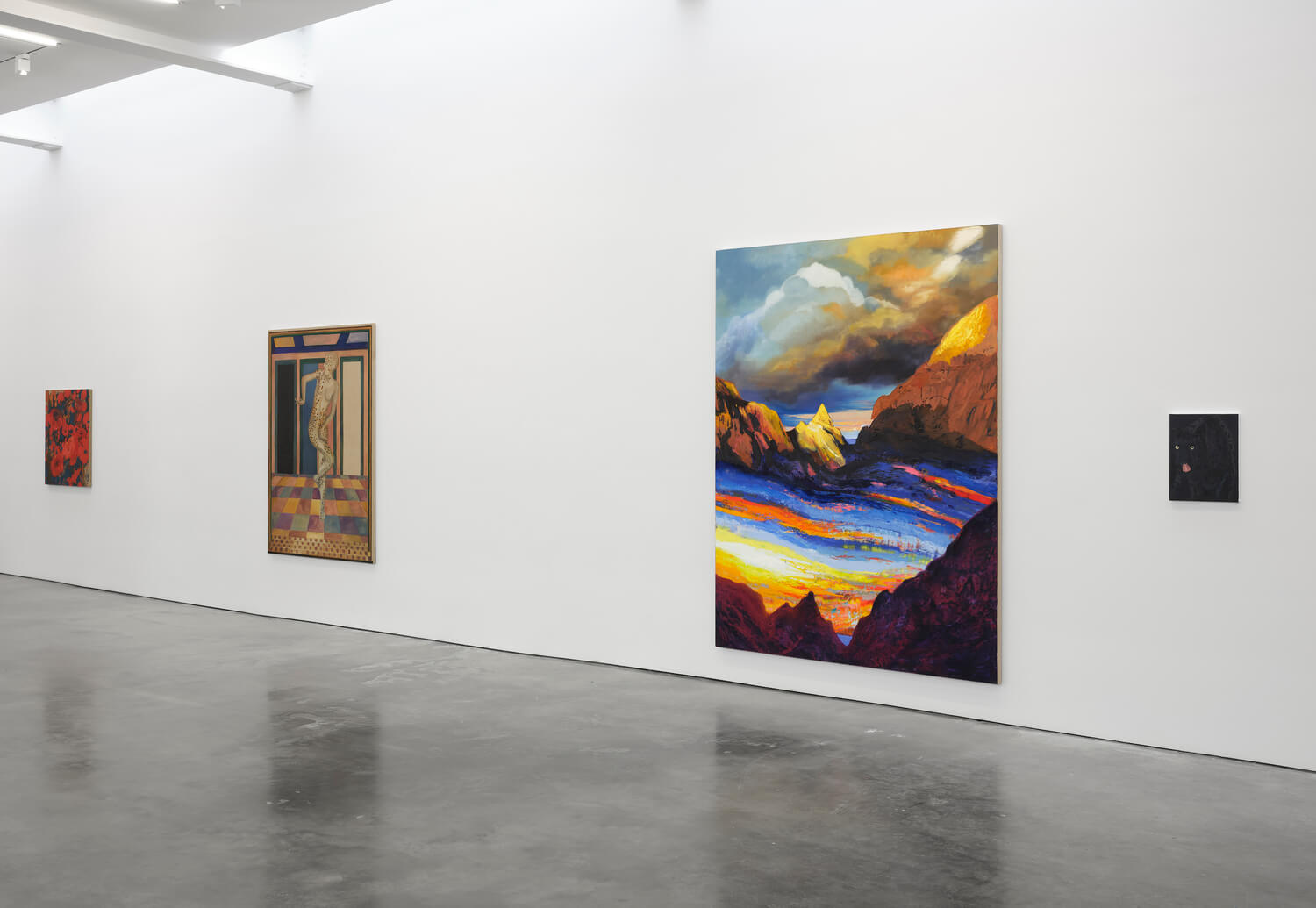 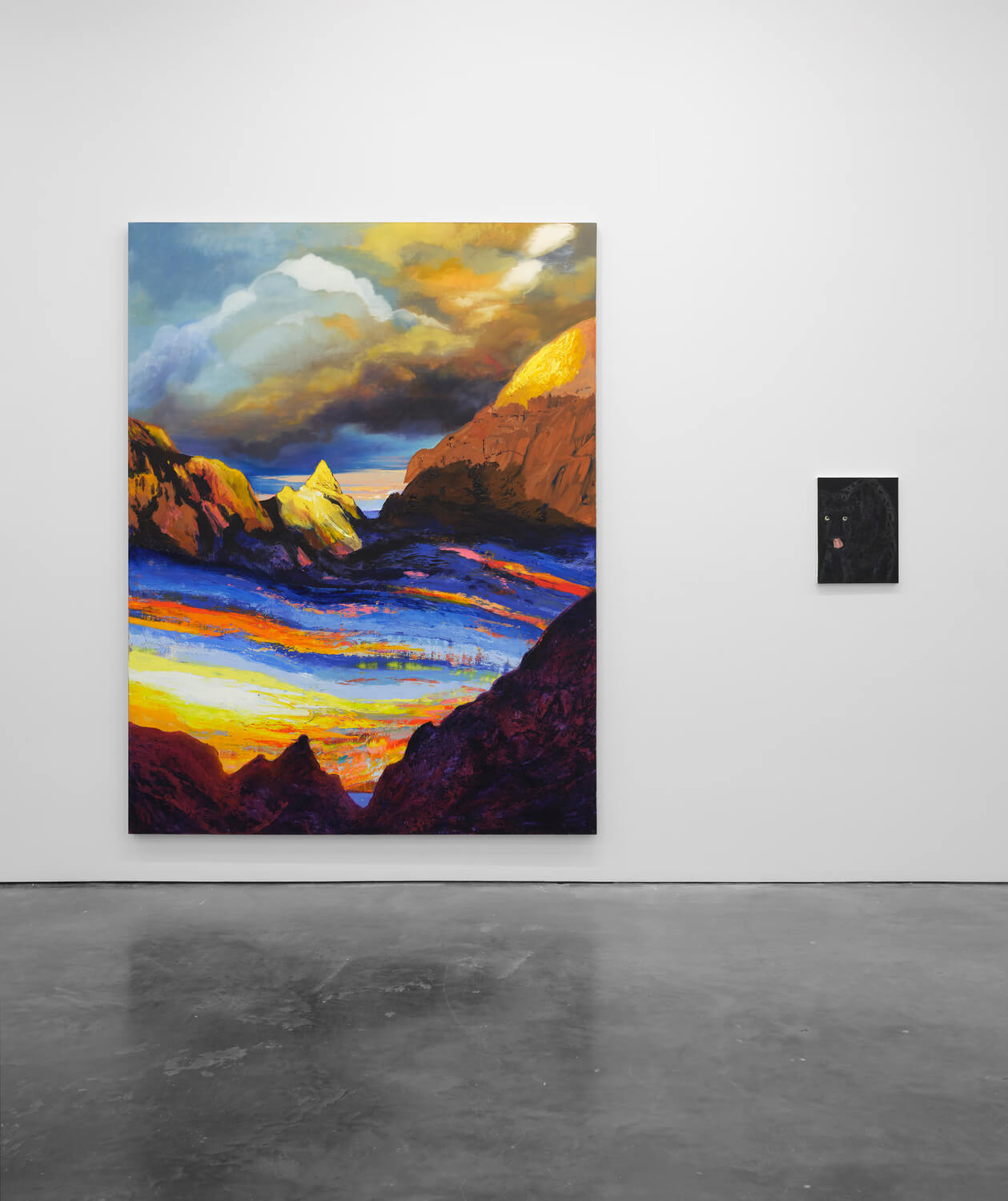 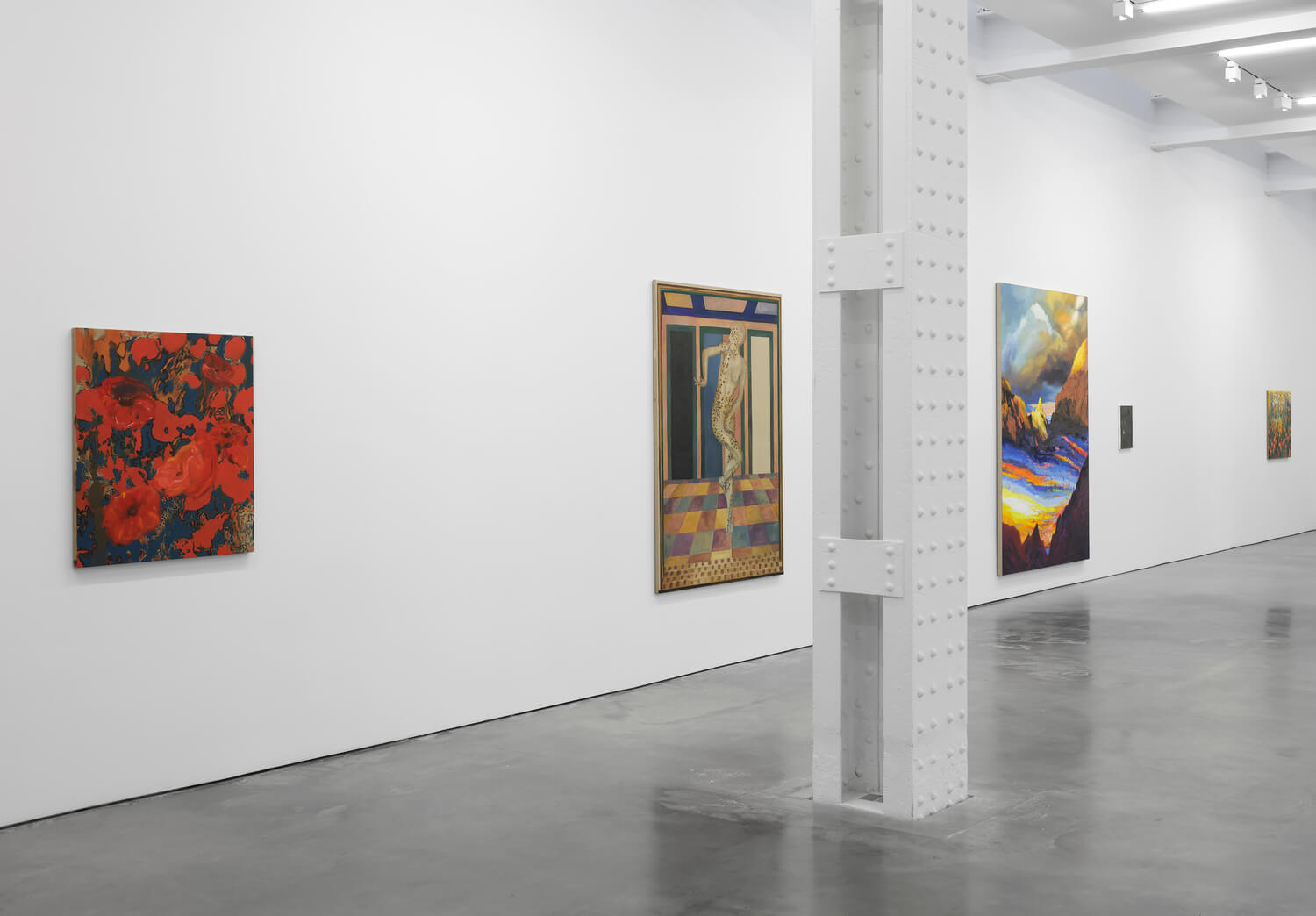