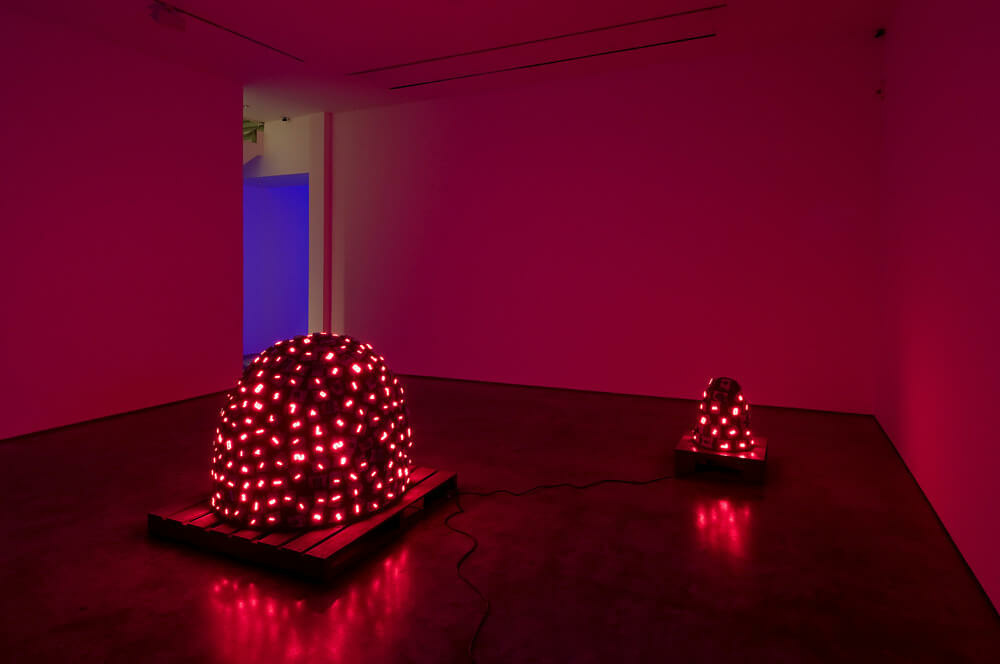 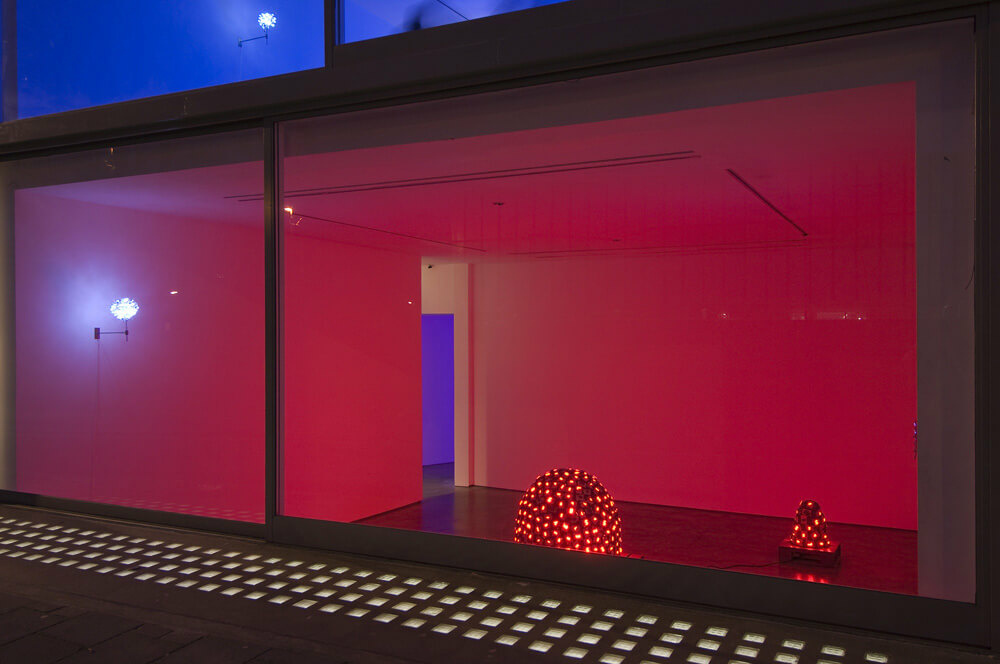 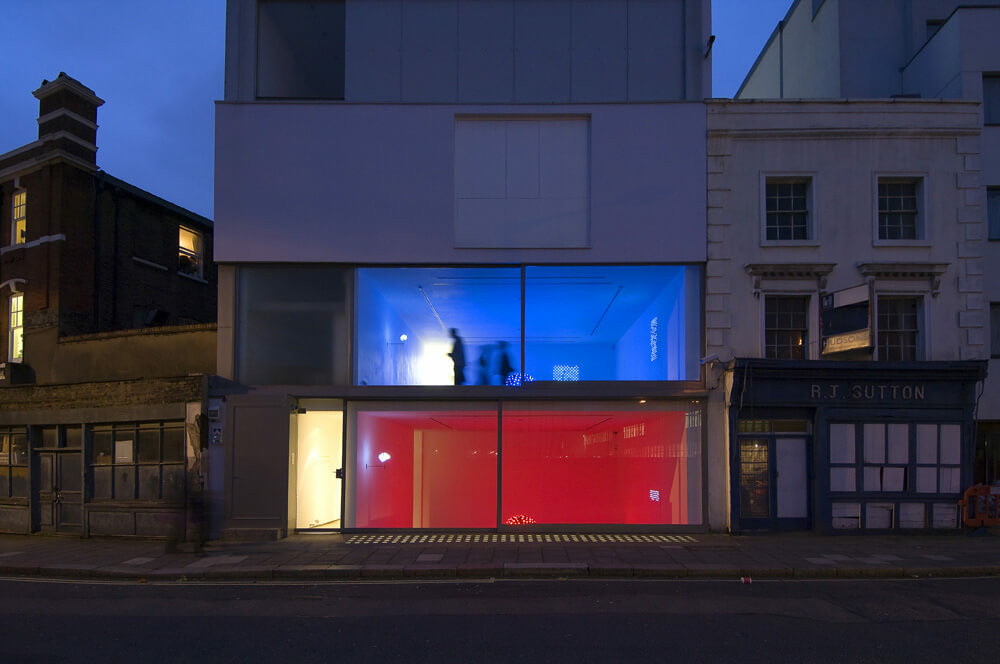 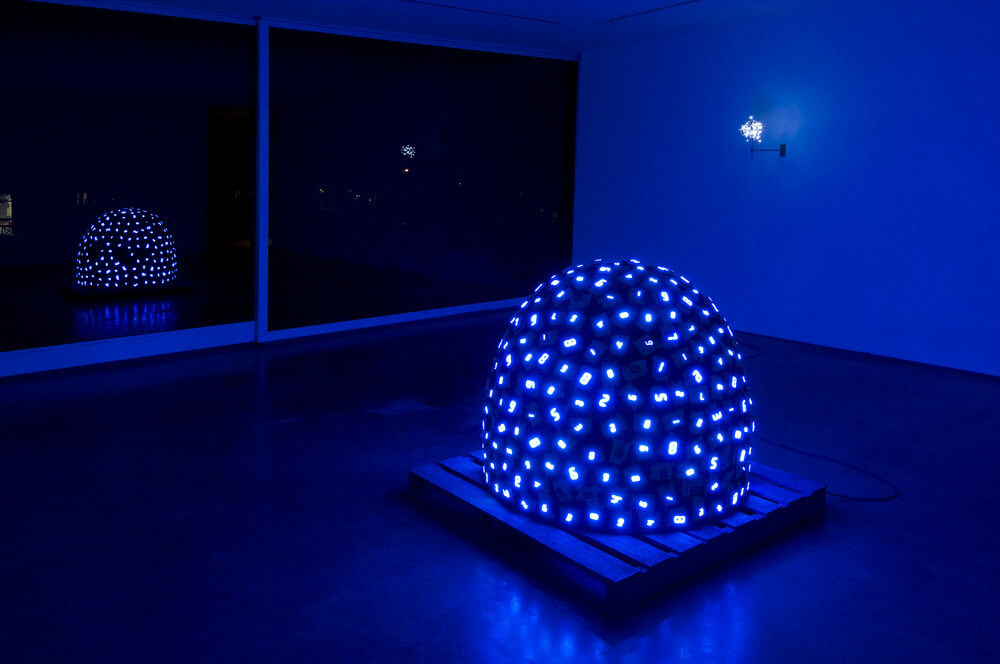 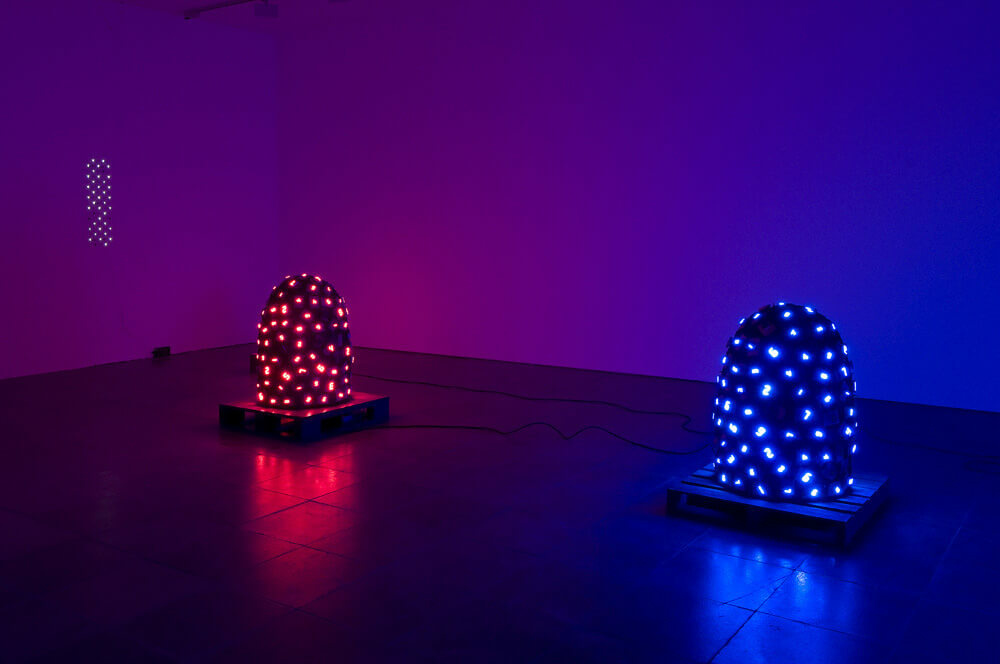 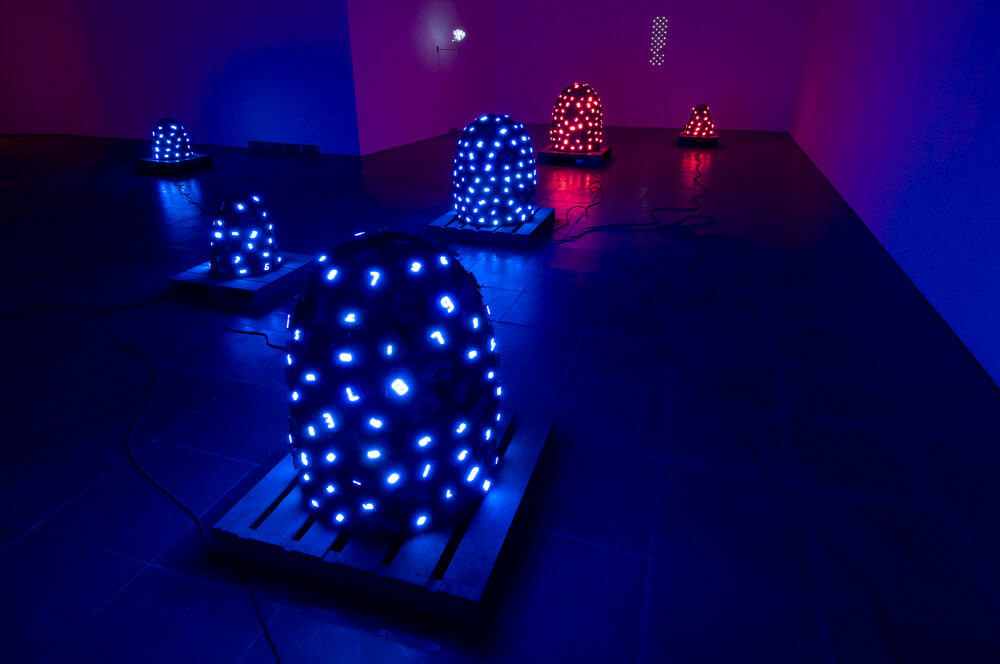 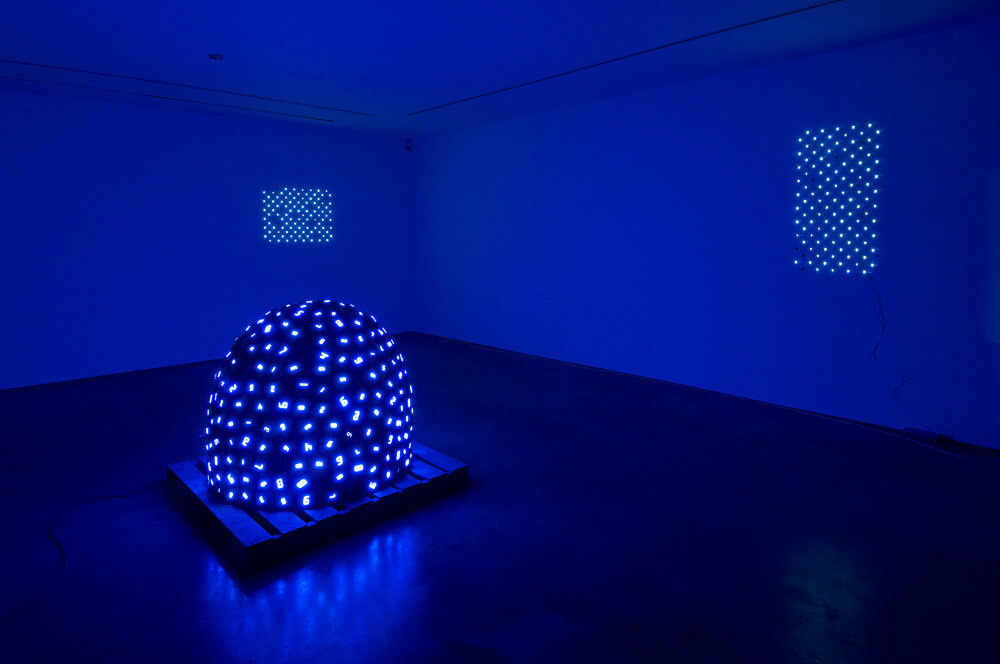 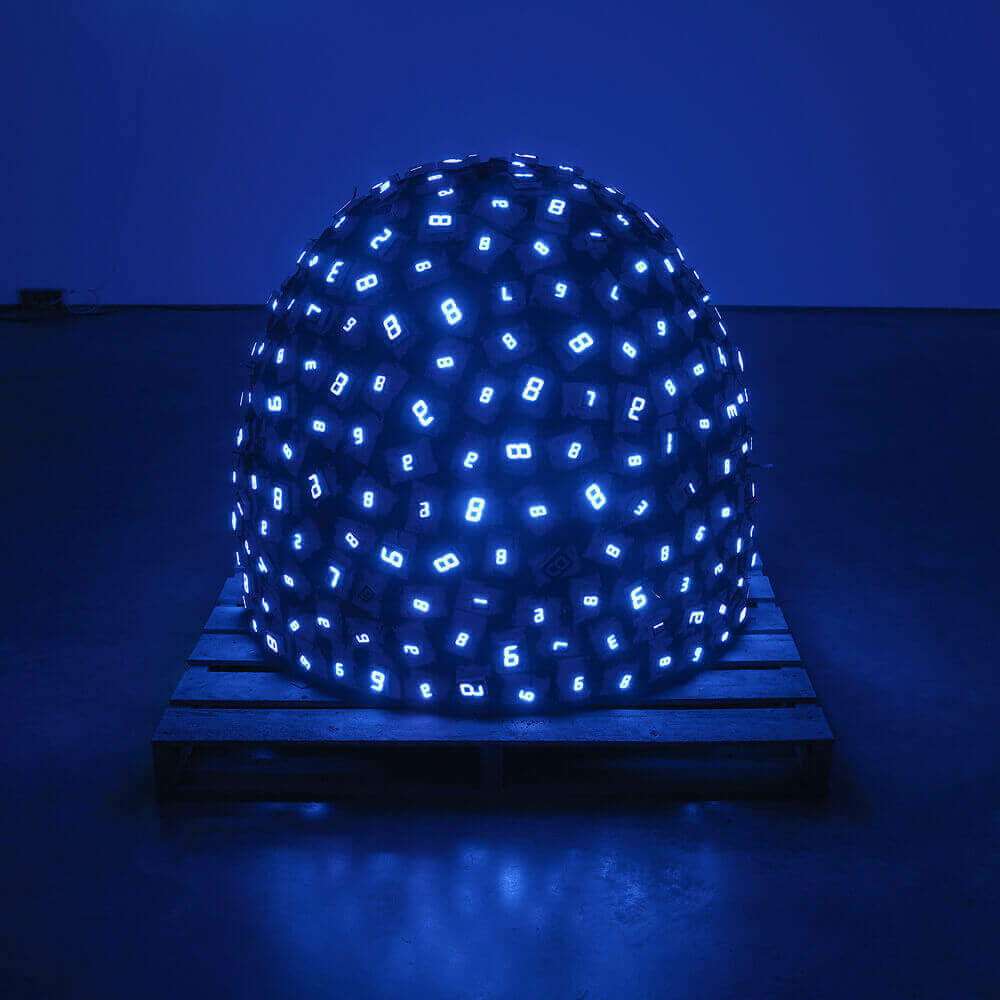 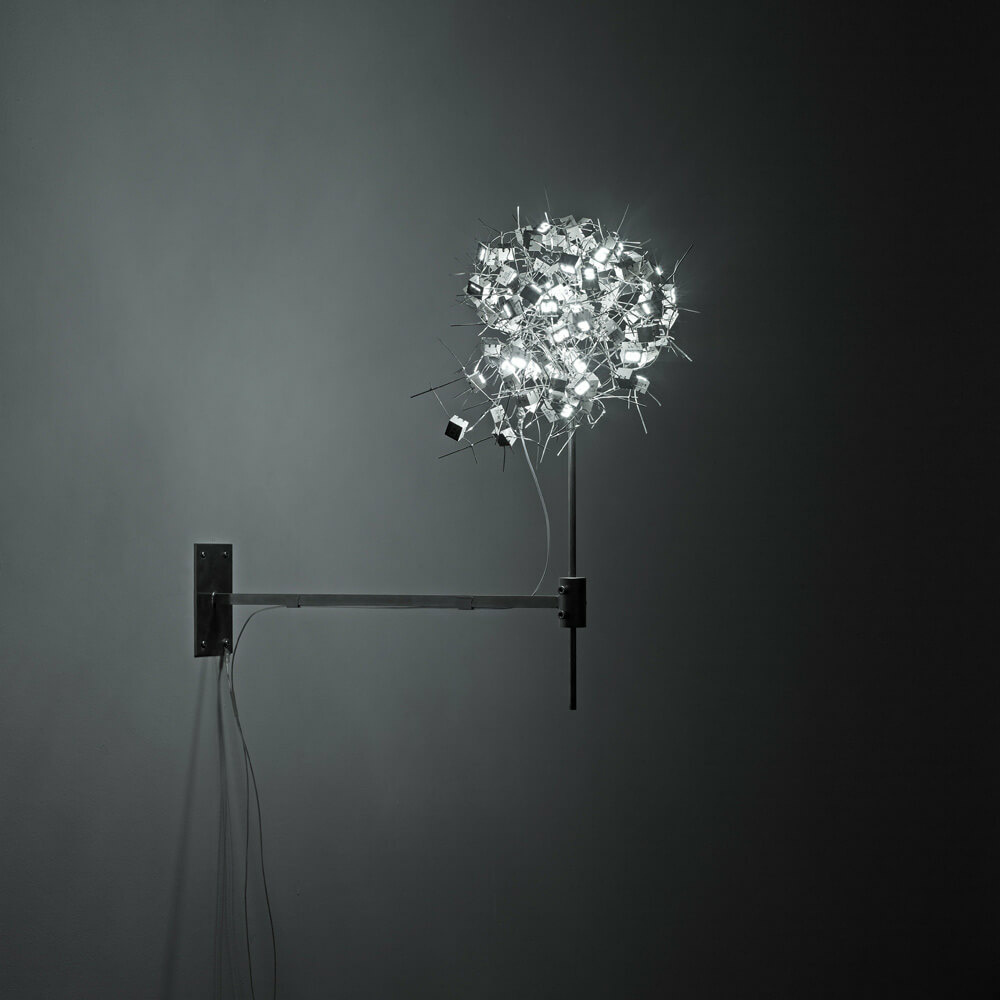 Lisson gallery is proud to present an exhibition of new works by Japanese artist Tatsuo Miyajima. Since 1987, Tatsuo Miyajima has been constructing installations using LED digital counting devices. His works combine a performative aspect with architectonic structures, sometimes taking the shape of geometric patterns or organic shapes as well as encompassing vertical and horizontal surfaces. The LED devices count progressively from 1 to 9 or backwards – Miyajima never employs 0 – establishing a rhythm as definitive as repetition itself and the inexorable passing of time. Sometimes the colored numerals run at different speed, synching to the rhythm of natural events or the pulsing of life in individual subjectivities.

The series Counter Fragile Lifestructurism is a reflection on the becoming of life. Each human being is constituted by over 60 billion cells, testifying at every moment the miracle of living. Each LED panel, with its individual flashing element counting in reverse from the digit 9 to 1, represents one cell. As the numbers progressively count down and start anew, they renew each time the cycle of death and life.

Tatsuo Miyajima identifies the brain as the centre of life, the element that identifies a human being. The clusters Counter Fragile Counter Brain represent the network of cells where synapse activity takes place, in the transmission of a pulse.

The Pile Up Life series was originally conceived for Prospect. 1 New Orleans and is presented here for the first time in Europe. Observing how large scale natural disasters affect human beings and the sense of powerlessness that we share on these occasions, Miyajima created the work Pile Up Life as a requiem for the lives lost in these disasters. This series of towers is made of natural stones with embedded LED lights called 'counter gadget'. The works reference traditional commemorative monuments, found in different cultures from Eastern Asia to Canada and America as well as the concept of eternal life celebrated in Buddhism. The 'counter gadget' are made in two colors, red and blue, each programmed to count up from 1 to 9 and down from 9 to 1. Their speed is determined by the people who pray for requiem, and translates subjective individuality into rhythm.