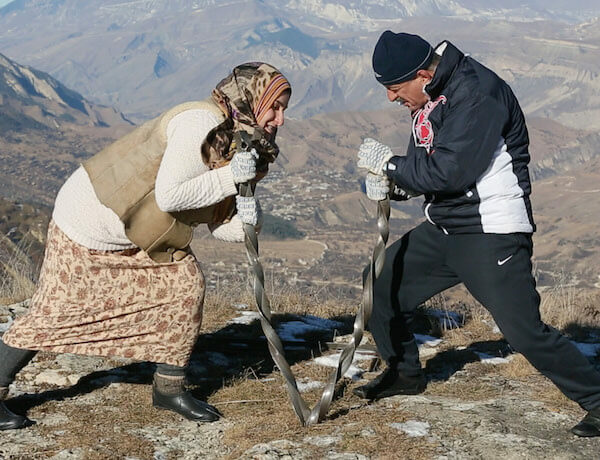 An evening of performance presented by Haroon Mirza and Daria Khan, Mimosa House

The event is at capacity; please email rsvp@lissongallery.com to enquire

'Supernature in Two Parts’ is an evening of durational, sonic and experiential performances taking place across both London spaces. Presented by Haroon Mirza and Daria Khan, it furthers a collaboration between Lisson Gallery and Mimosa House, an independent project space dedicated to young artists working in diverse media, with a specific focus on performance, queer, female and non-binary practitioners.

Part one, curated by Khan and Mimosa House, features the work of Moscow-based Taus Makhacheva, whose alter-ego, Super Taus, will be performing heroic feats of sculptural creation on the night, by bending great rods of steel with her bare hands and fashioning works live in the gallery (pictured above: Super Taus, 2014, documentation of sculpture making with Omar Khanapiev). Super Taus, a woman with super-human powers of strength, hailing from Dagestan in the south of Russia, welds and bends the material herself, in a gesture of resistance and empowerment.

London-based artist Gaia Fugazza will be offering visitors the chance to hold sculptures in their mouths. Embracing the evasive shapes of these sculptures is, she says, like touching a shy plant, which closes up its leaves in order to avoid contact and intimacy. This notion comes from the Mimosa Pudica – known as the ‘shy plant’ or the ‘shame plant’ – which has long been used in Indian Ayurvedic medicine. Its contradictory power lies in inciting desire, but also in acting simultaneously as a contraceptive for women and a spermicide for men.

The final act will feature Linda Stupart who has developed a performance around overlapping investigations into melting icebergs and Morgellons disease (a syndrome, commonly diagnosed as a kind of contemporary hysteria, whereby the sufferer finds fibres, crystals, and other alien objects under its skin). The disappearance and reappearance of crystals (both water crystals and those found by Morgellons suffers) are considered as simultaneous and related crises, both concerning boundary integrity.

Part Two sees Haroon Mirza stage two major new performances in collaboration with artists, musicians, producers and performers. After a group visit to CERN in Geneva, where Mirza and long-time associate Jack Jelfs were artists-in-residence having been awarded the 2017 COLLIDE International Award, they developed a piece entitled The Wave Epoch, which premiered at Brighton Festival in May this year. The work imagines how future humans would view the archaeological site of the Large Hadron Collider after two millennia have passed. Due to the extreme geometric forms of the particle accelerator and its detectors, this 27-kilometre circle containing numerous smaller rings will be presumed by this future civilisation as a long-lost site for magic, ritual and religious practice. 'Supernature' will host the London debut of The Wave Epoch, featuring Mirza, Jelfs, Elijah and an upcoming South London musician GAIKA. Due to personal circumstances, Gaika will not be performing tonight. The work was originally commissioned for Last Dance, a programme developed and produced by Elijah and Lighthouse Brighton. It was co-produced by the ScANNER network (consisting of FACT and Arts at CERN, as well as Le Lieu Unique, Nantes; CCBB, Barcelona; iMAL, Brussels) in collaboration with Lighthouse. It is part of Re-Imagine Europe, co-funded by the Creative Europe programme of the European Union.

Both performances presented at Lisson reference the roughly 2,000-year span of the astrological age. Indeed, the second performance is titled ♒, using the symbol for Aquarius – our current zodiacal timeframe – and features Mirza alongside Tim Burgess and Nik Colk Void. In addition to observations on specific political, scientific, technological and theological developments facing us as we transition into this new astrological era, it also indirectly references current concerns, including Brexit and the UK’s relationship to Europe and the wider world.

About the artists
Tim Burgess is a musician and songwriter from Cheshire, best known as the lead singer of ‘The Charlatans’, who are subject of a forthcoming survey exhibition at the Cunard in Liverpool. He released a solo album in April and a record with Peter Gordon, ‘Same Language Different Worlds’, is forthcoming on 2 September on Burgess’ label, O Genesis.

Elijah is a grime DJ, producer and promoter. He is a regular contributor to the Boiler Room, Red Bull Music Academy and Vice. He co-found the Grime label Butterz and is currently the associate artistic director at Lighthouse, the Brighton-based art organisation that first staged The Wave Epoch in May 2018.

GAIKA is a musician, writer, cultural commentator, fashion designer and performer. His debut solo album Basic Volume – a genre-defying combination of influences including R&B, Afrobeat, dancehall and grime – is released at the end of July on Warp Records.

Jack Jelfs is an artist based in London whose work combines sculptural and visual elements with sound, electronics and live performance. He has released music under various aliases and performed or exhibited at venues including Tate Modern, Barbican, Serpentine Gallery and the Roundhouse. In 2017 he was the joint recipient (with Mirza) of the COLLIDE International Award, a two month residency at the European Organisation for Nuclear Research (CERN).

Taus Makhacheva studied at Goldsmiths, the ICA Moscow and the RCA. Her acclaimed video Tightrope was shown in the 2017 Venice Biennale and is currently part of the Liverpool Biennial. Her alter ego ‘Super Taus’, engages with her ancestral home of Dagestan, using strength to create provocative and ironic pieces. She has shown at Yinchuan, Shanghai and Sharjah Biennials and her work is in the collections of Tate Modern, Moscow MOA and MuHKA.

Nik Colk Void is a musician releasing solo work, while also collaborating and performing in the electronic duo, Factory Floor (who have held residencies at the ICA, Tate Modern, Barbican and for Mirza’s Stromboli Volcano Extravaganza, Forget Amnesia) as well as performing as part of the trio Carter Tutti Void (alongside Cosey Fanni Tutti and Chris Carter from Throbbing Gristle) among other projects.

About Mimosa House
Dedicated to artistic experimentation and collaboration Mimosa House is a new, independent, non-profit project space in the heart of Mayfair that works with emerging practitioners. Developed by curator Daria Khan, Mimosa House supports artistic process and exchange and delivers a public programme including four group exhibitions a year and collateral events. The programme will focus on self-initiated artists’ projects and collaborations by female and queer artists in particular.