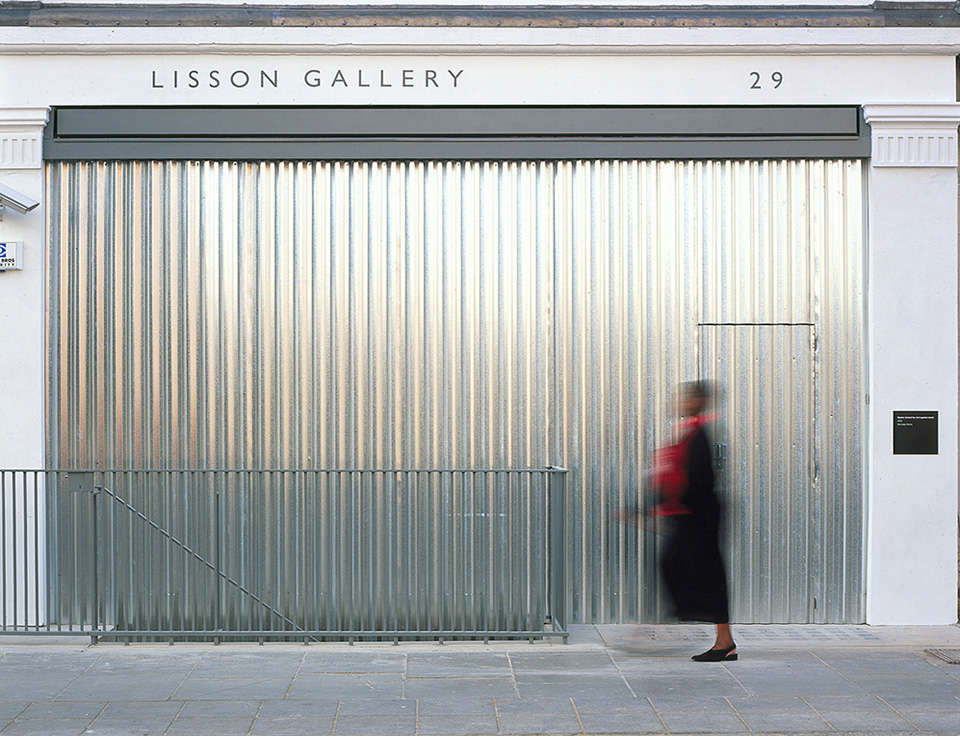 Lisson Gallery is delighted to announce the inaugural exhibition at their new gallery, 29 Bell Street, with the installation ‘Space closed by corrugated metal’ 2002 by Santiago Sierra.

Originally from Spain, but now based in Mexico, Sierra has become well known for his controversial video work and installations, which highlight the problematical nature of a capitalist economy. His past projects are remarkably diverse; in an earlier work he used petrol to set fire to a gallery on its opening night and in New York he hired someone to live behind a wall at P.S.1 Gallery for 15 days, 24 hours a day. The tasks Sierra selects are usually repetitive, pointless and absurd. For his solo exhibition at the IKON Gallery earlier this year Sierra paid an Irish street vagrant in Birmingham’s New Street to say “My participation in this piece could generate a profit of 72, 000 dollars. I am being paid five pounds.” While this appears highly exploitative, the beggar in the video, and many other of Sierra’s participants are willing victims and paid at least as much as the local average wage.

His work could be seen as merely reflecting the harsh reality of a market economy where everyone has their price, but much of his work has a powerful minimalist aesthetic and a poetic simplicity that transforms its political rhetoric into something more subtle and indeterminate. It can also be seen in the tradition of Arte Povera and the socially engaged process artists of the 1970s.

Santiago Sierra’s work at Lisson will happen in two parts:

Santiago Sierra has produced a new audio project for the South London Gallery and The Felix Trust for Art to take place simultaneously in London, Geneva, Frankfurt, Madrid and Vienna as part of a South London Gallery group exhibition entitled “20 Million Mexicans Can’t Be Wrong” from 18th September ­ 17th November.

For Part II of his exhibition at Lisson Gallery, Santiago Sierra has created two linked ‘actions’ in the gallery entitled “Workers facing the wall” and “Worker facing into a corner”. Participants in the action have been instructed by Sierra to stand in silence with their heads bowed for one hour a day during the course of the exhibition. As is usual with Sierra’s work, the participants have been recruited locally and are being paid the minimum wage.

Facing the wall has several kinds of associations. It invokes ideas of humiliation, disgrace and punishment. The person facing the wall is vulnerable to attack, to being stabbed in the back, both literally and metaphorically, and also brings to mind prisoners in front of a firing squad. Standing head bowed and in silence is a submissive stance and potentially uncomfortable, though it remains to be seen whether visitors to the gallery will be equally discomforted by what they experience.

People seen from behind is a recurring image in Sierra’s work. In a recent action for the Kunsthalle, Vienna, he recruited people to stand in two lines facing the wall wearing only their underwear. They were then arranged in order of their skin tone. More controversially, he paid six unemployed Cubans to have a line tatooed across their backs for 30 dollars and he later did the same to a group of drug-addicted prostitutes, paying them the price of a shot of heroin in return.

Now based in Mexico, Spanish-born Sierra has become well-known for his highly political stance and his investigations into the exchange of money and labour. His work suggests that an undeniable fact of capitalism is that everyone has a price. Whilst sometimes shocking, Sierra’s work is rooted in a powerful minimalist aesthetic and is informed by a poetic simplicity that elevates his work above mere political rhetoric.

Lisson Gallery’s new space at 29 Bell Street will be open to the public for the first time during this exhibition. For more than three decades Lisson Gallery has been at the forefront of developments in contemporary art, introducing young artists to a wider audience as well as providing continuing support to those whose reputations are already established worldwide. Lisson Gallery has always been an independent force in the international art scene and the opening of 29 Bell Street will further confirm its position as one of the great supporters of artistic innovation.