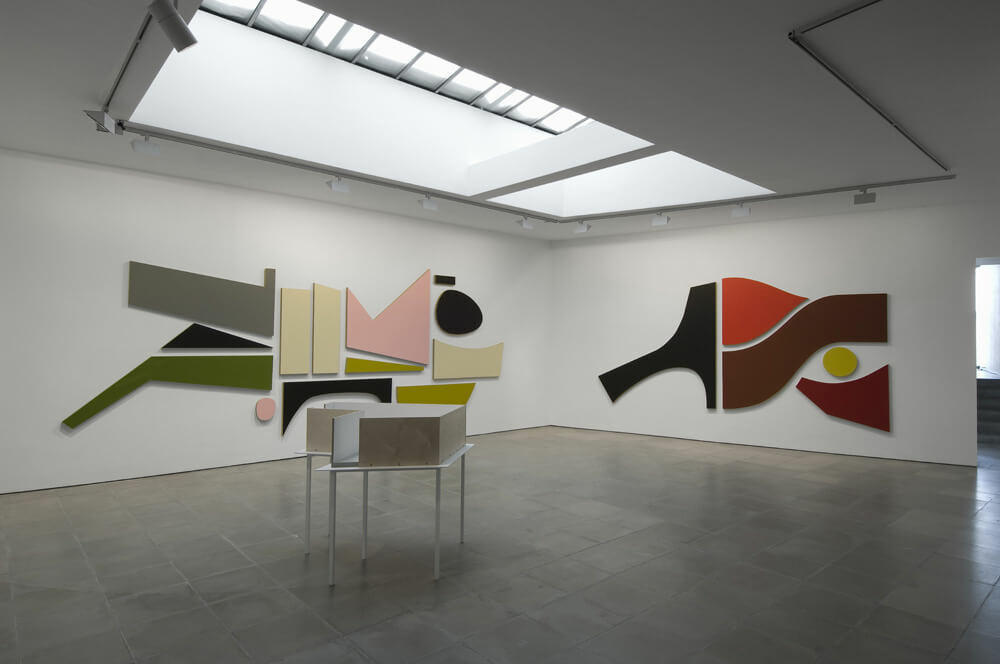 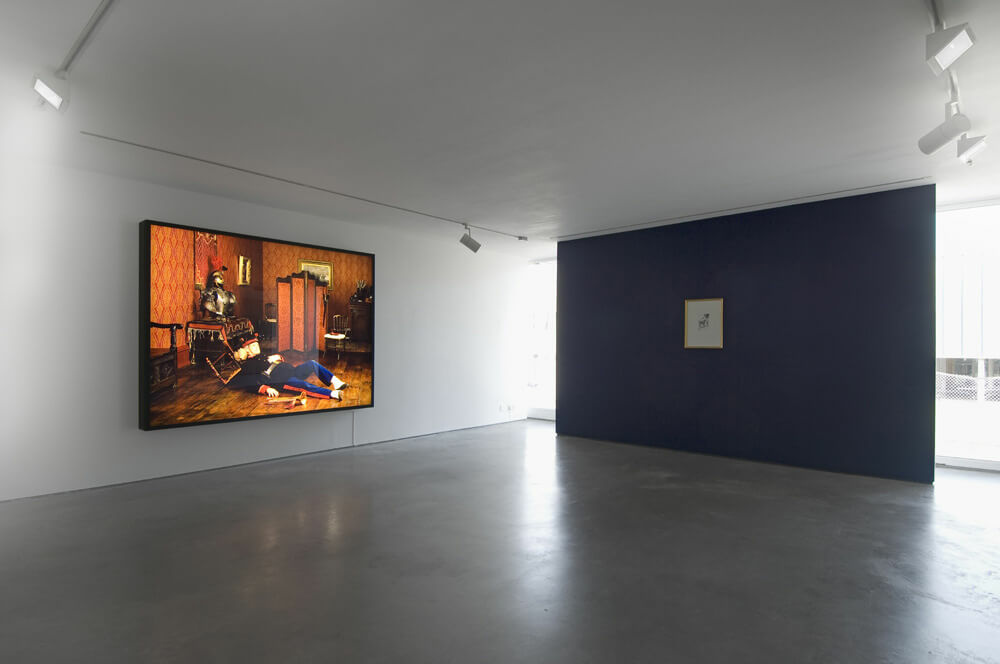 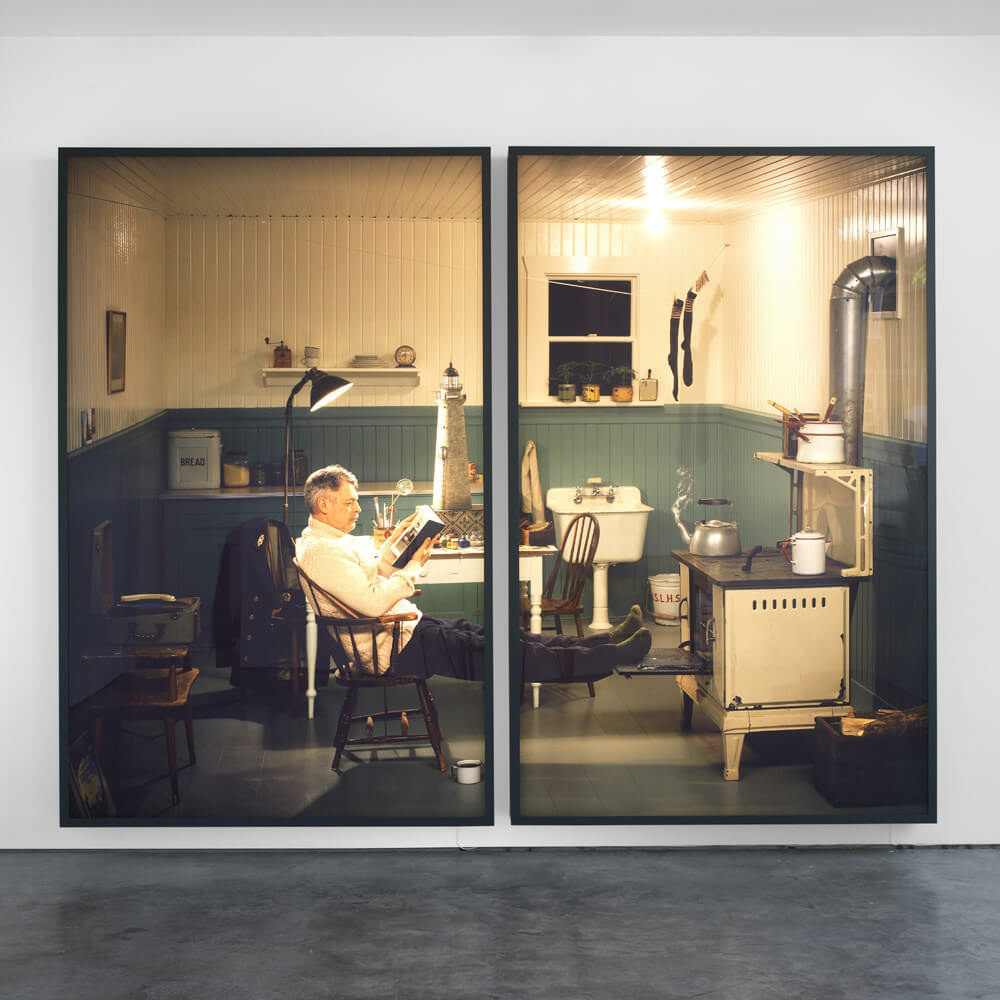 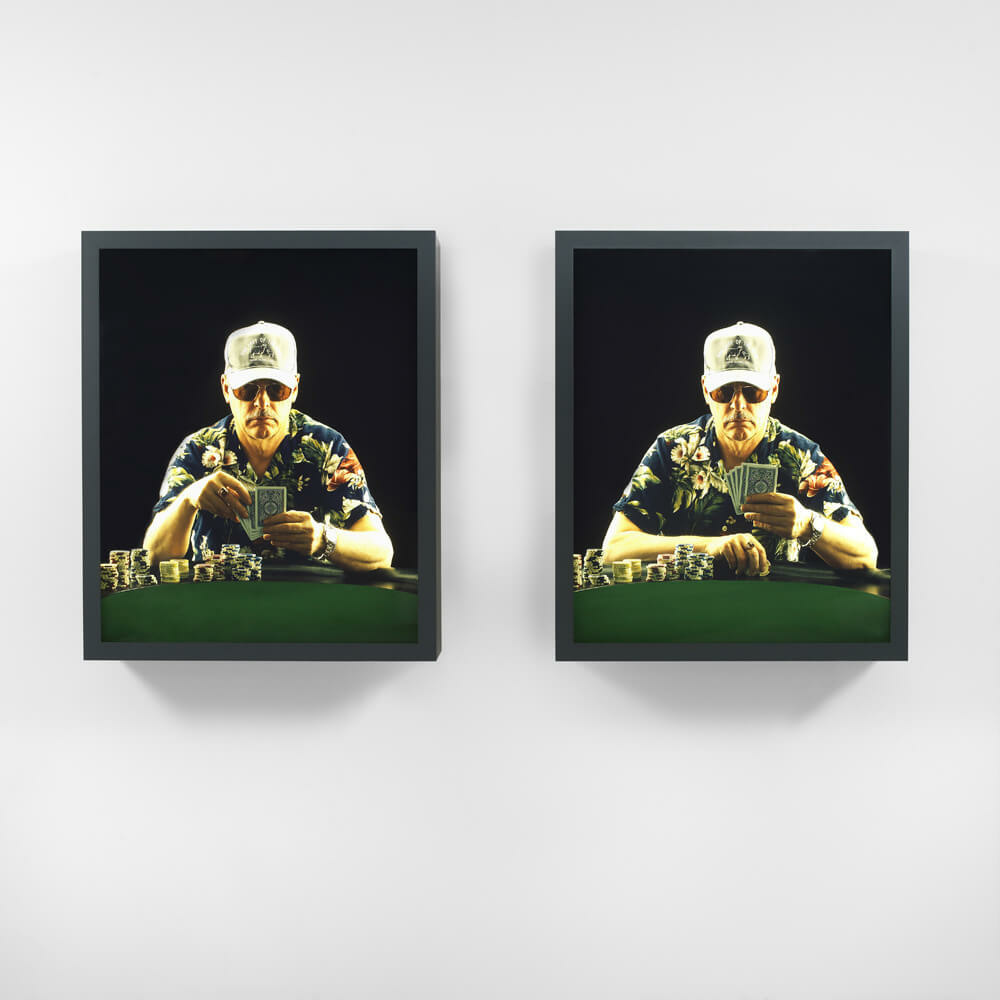 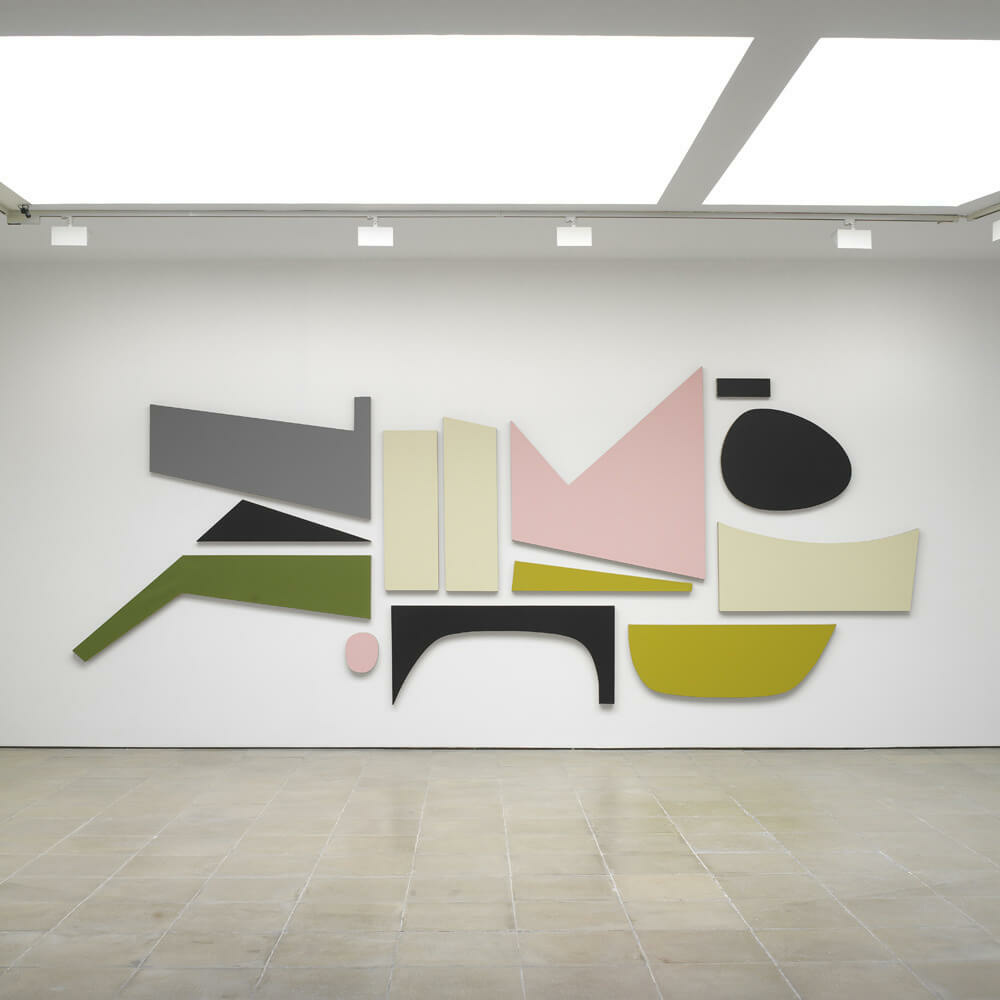 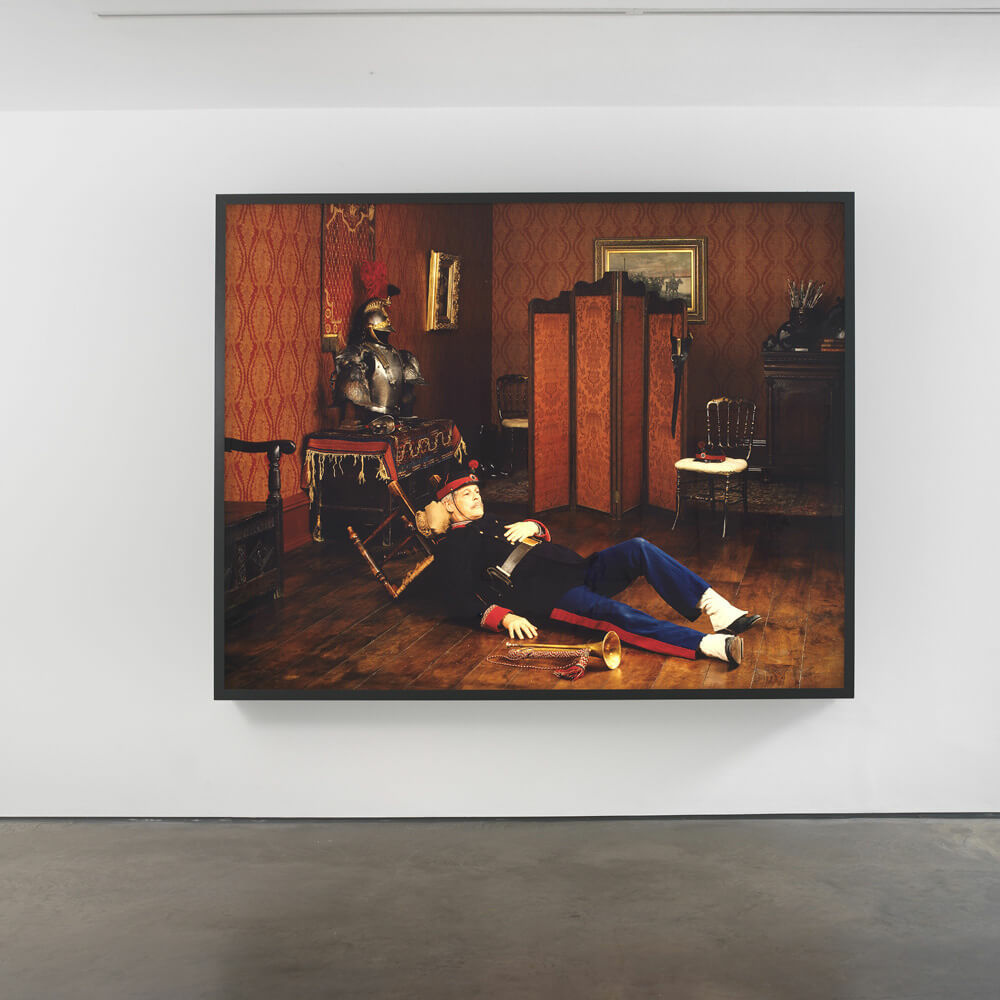 Artist’s Model Posing for “The Old Bugler, Among The Fallen, Battle of Beaune-la-Roland, 1870” in the Studio of An Unknown Military Painter, Paris, 1885 2009 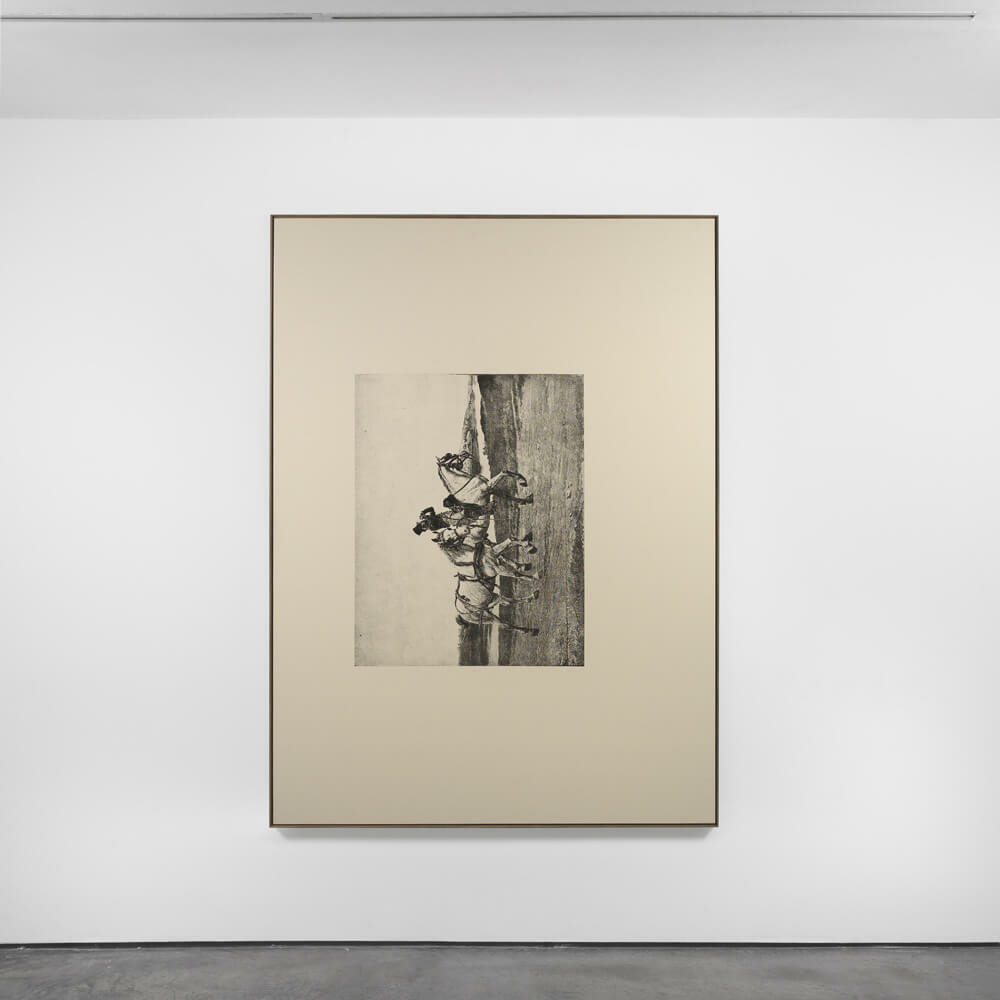 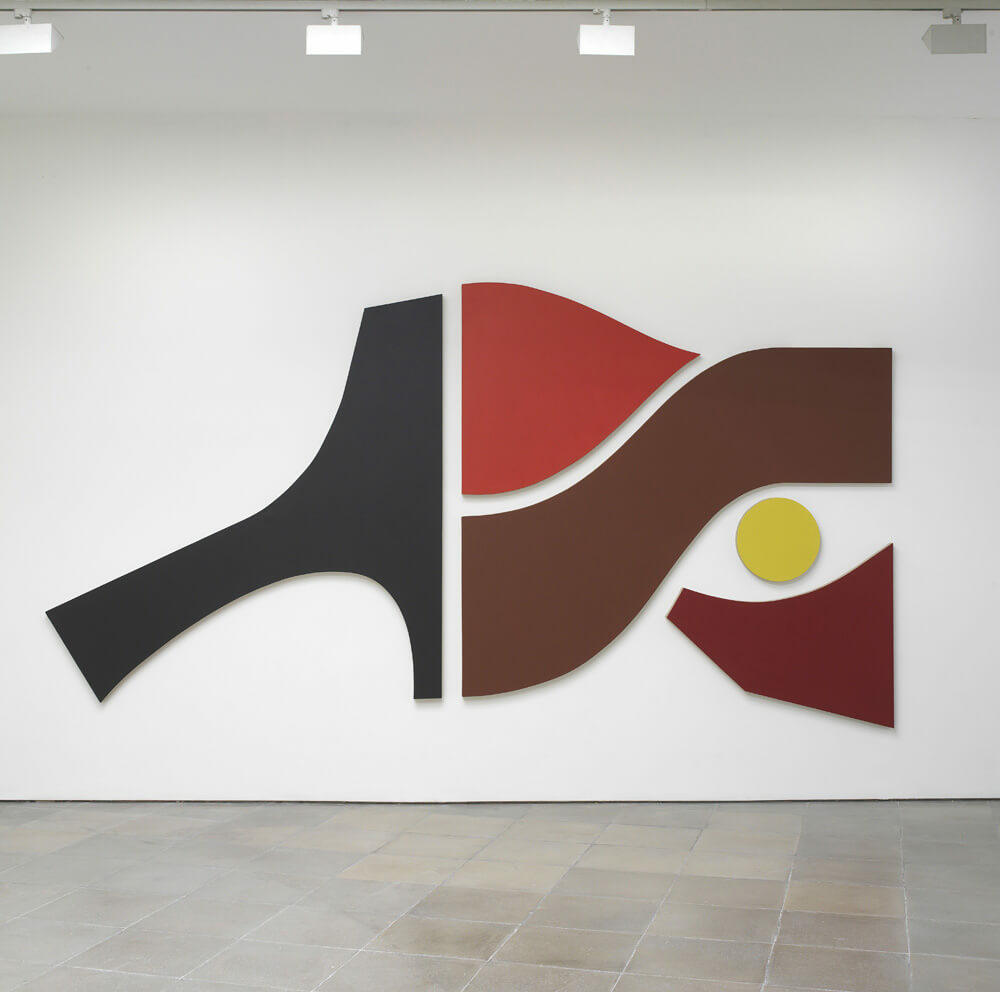 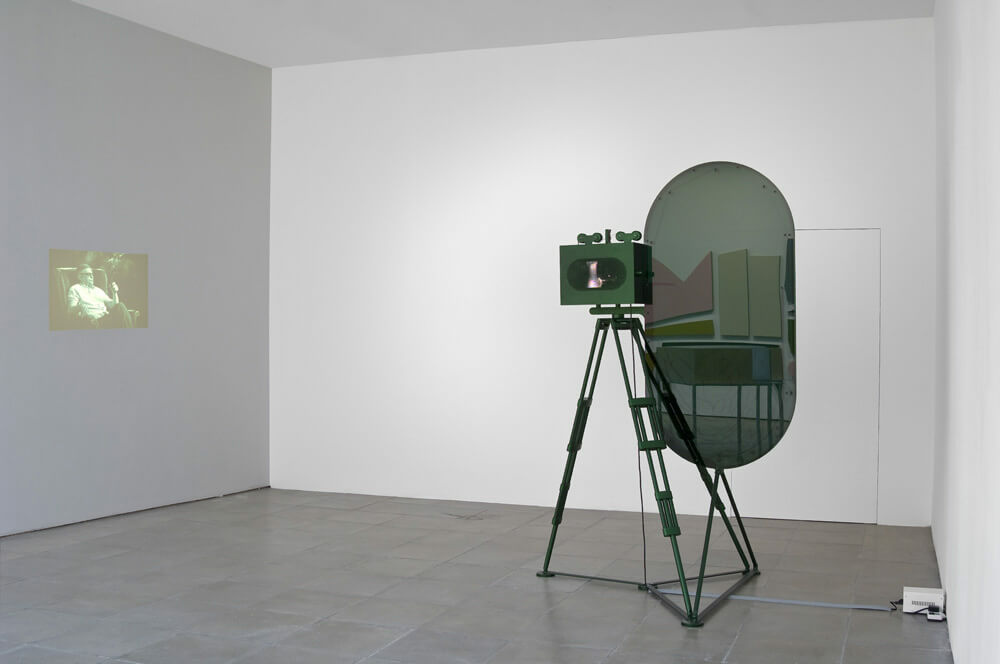 The Green Cinematograph (Programme I: Pipe smoker and overflowing sink) 2010

Painter, Poet, Lighthouse Keeper presents a series of new works, created by Rodney Graham specifically for Lisson Gallery. One of the most original and influential artists of his generation, Graham has constructed a complex and articulate practice which operates through systems of quotation, reference, adaptation and inscription from other works or authors. Here the artist draws from sources as diverse as structural film, Mallarmé's poetry, British zombie movies, and 19th century French military painting to create a kaleidoscopic exhibition combining works in photography, film and painting.

The light box, Lighthouse Keeper With Lighthouse Model, 1955, depicts the golden age of the hobbyist, at a time when automation was rendering the work of lighthouse keepers redundant. With increased time on his hands, the lighthouse keeper devotes himself to creative, leisurely activities, such as poetry and model making. The lighthouse keeper is seen in profile, reading a book in front of a model of a lighthouse and warming his feet in a wood stove. Closer inspection reveals that the lighthouse model is a replica of the Minot's Ledge lighthouse, which was used on the buttons and insignia of the US Lighthouse Service and which also appears on a uniform and hat within the image. The book Graham is reading is a book on lighthouses, lying open on a page showing part of the illustration which served as inspiration for the work. The multiple and repeated layers of imagery serve to condense into one single frame a narrative that goes beyond the immediate set piece.

Artist's Model Posing For 'The Old Bugler, Among the Fallen, Battle of Beaune-Roland, 1870' In The Studio Of An Unknown Military Painter, Paris, 1885, was inspired by a book plate Graham found illustrating the French painter Alphonse de Neuville in his studio in Paris, c.1880. The painter stands at his easel, gazing down at the subject of his unseen painting - a male model in the uniform of a National Guard infantryman lying prostate on the floor. Graham takes on the role of the model seen from the viewpoint of the artist – unseen and displaced from the image – thus coinciding with the point of view of the viewer. Graham here explores the relationship French artists had to the disastrous Franco-Prussian war (1870-1871); many young artists, including the promising impressionist painter Jean Frederic Bazille, died at the battle of Beaune-Rolande in 1870, whilst de Neuville constructed his reputation on his ability to create a heroic iconography associated with the campaign.

Good Hand Bad Hand, 2010 is a set of two light-boxes showing Graham at a gambling table, cards in hand. The two images present only minor differences, akin to what in a game of poker is termed a 'tell', a subtle change in behaviour or expression which might give away the game; the character played by the artist is both revealed and hidden at the same time.

Two large-scale multi-part paintings occupy the main gallery space. Psychomania Variation 1 and Psychomania Variation 11 draw inspiration from the 1971 eponymous British film, in which a biker gang defies death by signing a pact with the devil. This low-budget zombie biker movie is also George Sanders' last performance before he committed suicide leaving the famous suicide note "Dear World, I am leaving because I am bored." Fascinated by the two multi-panel wall reliefs which decorate the gang leader's hyper-modernist mansion, Graham experiments with the deconstruction and decoding of the language of abstraction, reconfiguring the composition of the original paintings whilst maintaining a basic vocabulary of form. A scale model of the interior of Lisson Gallery featuring the paintings and two monitors showing a key scene from the film complete the installation.

The Green Cinematograph (Programme 1:  Pipe Smoker and Overflowing Sink) acts as a counterpoint to the psychedelic references of the abstract Psychomania paintings. Projected from a bright green 16mm film projector, the black & white film displays two apparently disconnected scenes. In one Graham sits on an arm-chair smoking a pipe whilst in the other a sink overflows with foam which slowly but steadily expands creating unexpected sculptural forms before spilling onto the floor. Deceptively simple, the film is an exploration of the Kuleshov effect, an editing technique by which the viewer creates a connection between two seemingly unrelated scenes.

Through the Forest, a retrospective of Rodney Graham's works from 1986-2009 is currently on view at the Kunstmuseum, Basel. The exhibition is a co-production with MACBA, Barcelona and the Hamburger Kunsthalle, where it will travel  later in the year. The exhibition is accompanied by a fully illustrated catalogue.  Other recent solo exhibitions include the Jeu de Paume, Paris; Sprengel Museum, Hannover (where he was the recipient of the Kurt Schwitters Prize), and the BAWAG Foundation in Vienna, Austria. Recent group exhibitions include 'Little Theatre of Gestures', Malmö Kunsthall, Sweden and Museum für Gegenwartskunst, Basel, 'The Cinema Effect', The Hirshorn Museum, Washington, D.C.; the Yokohama Triennale, Syndey Biennale and Liverpool Biennial. Graham lives and works in Vancouver.