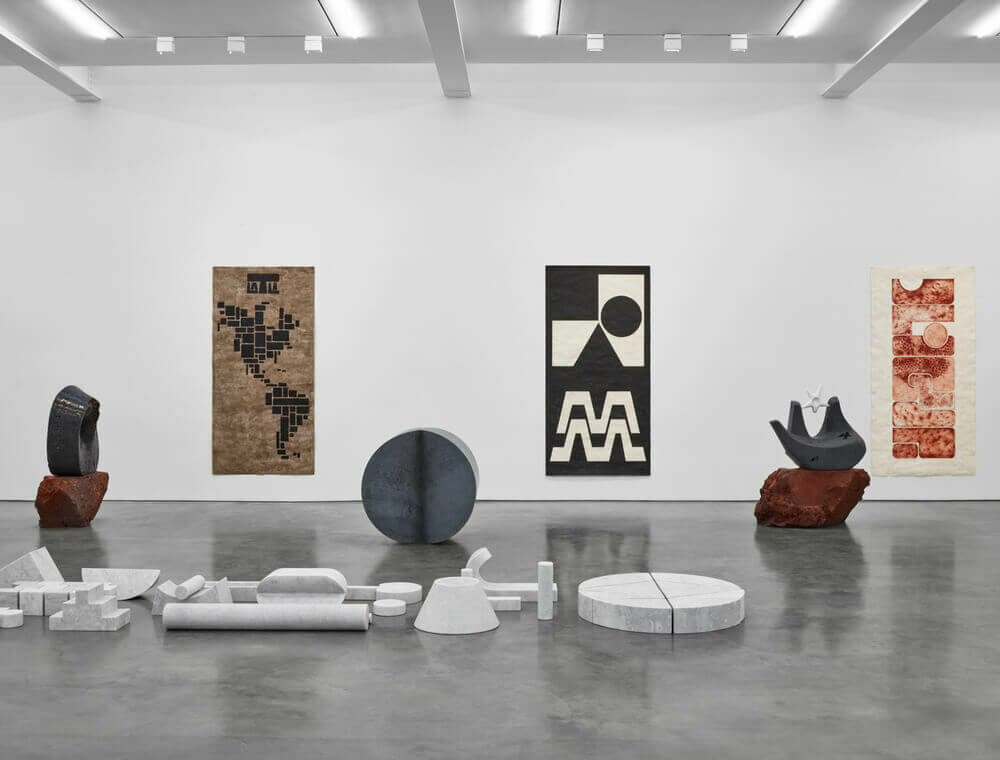 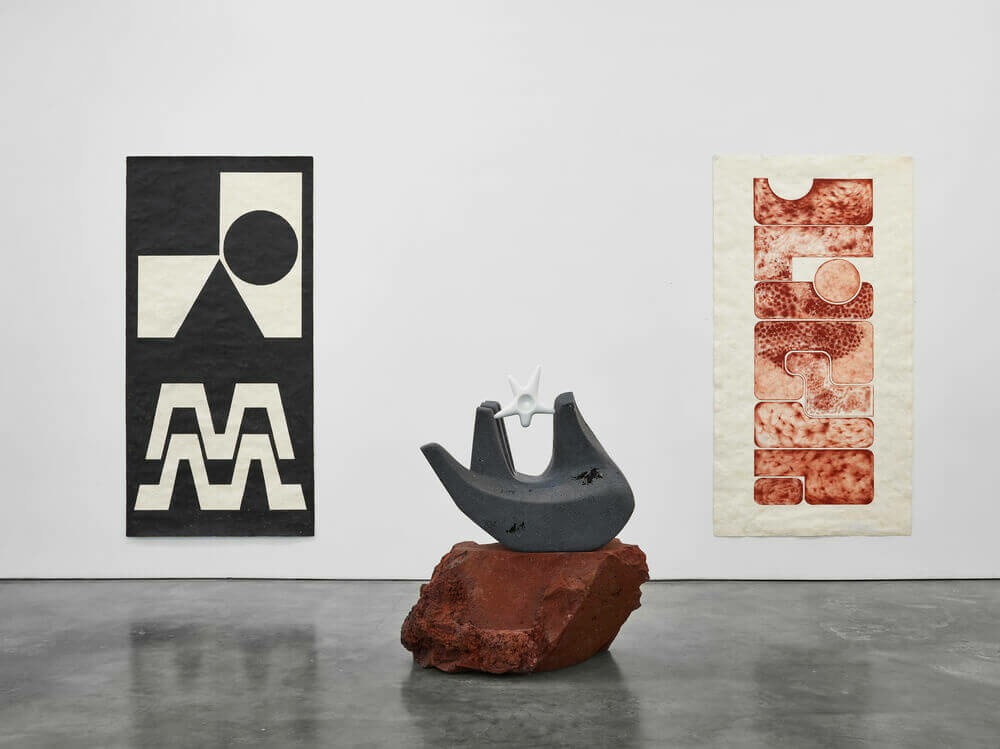 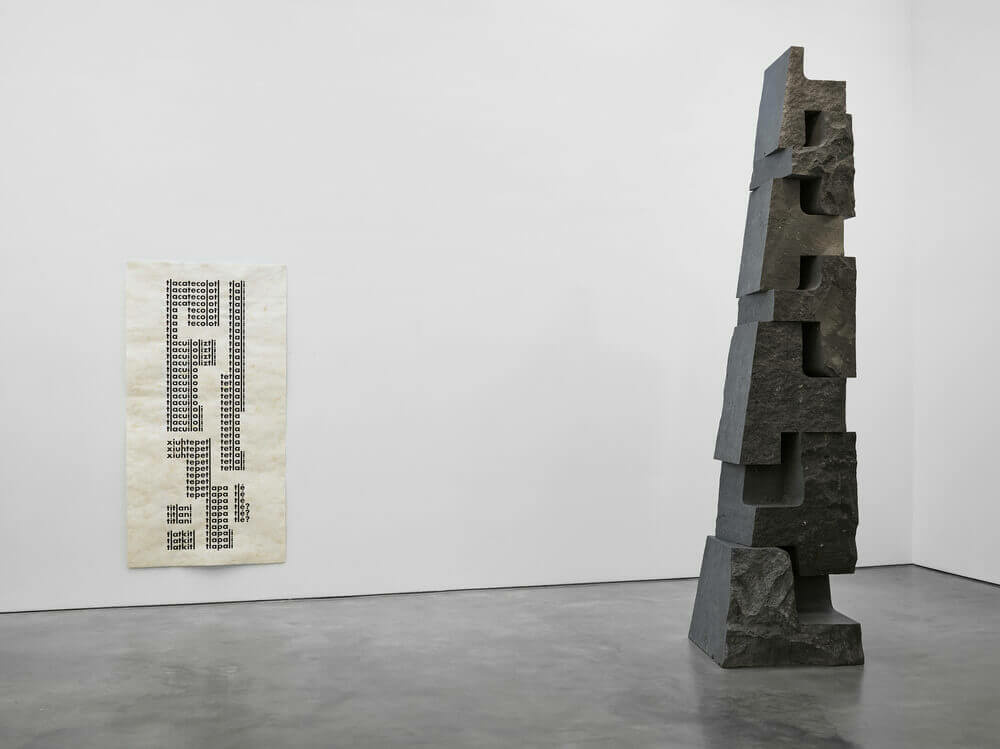 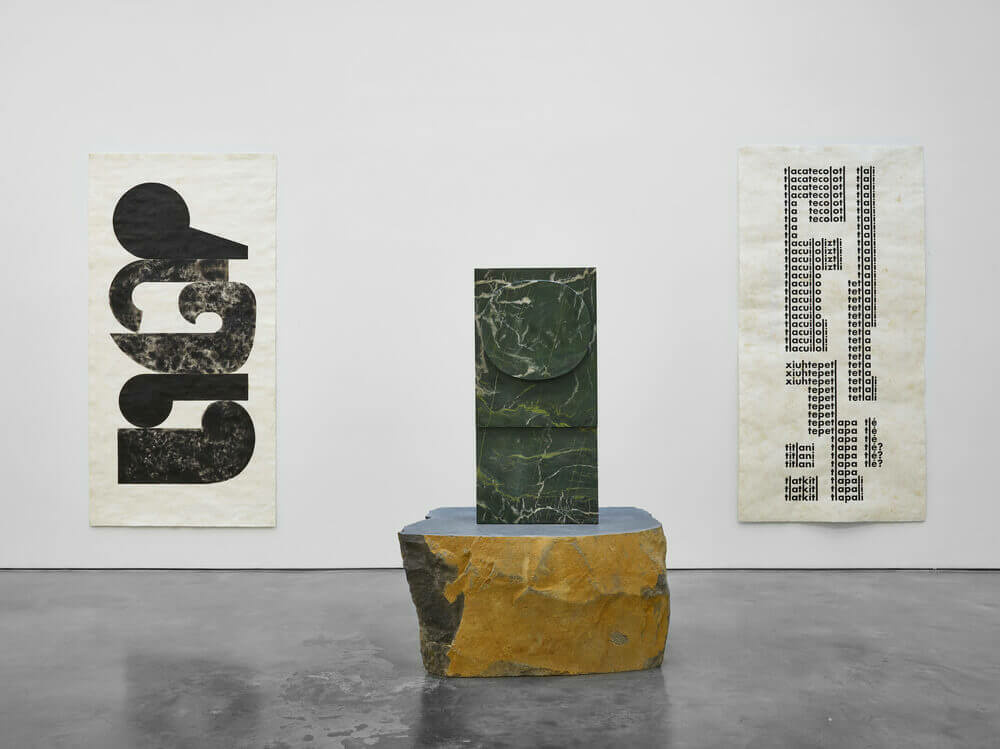 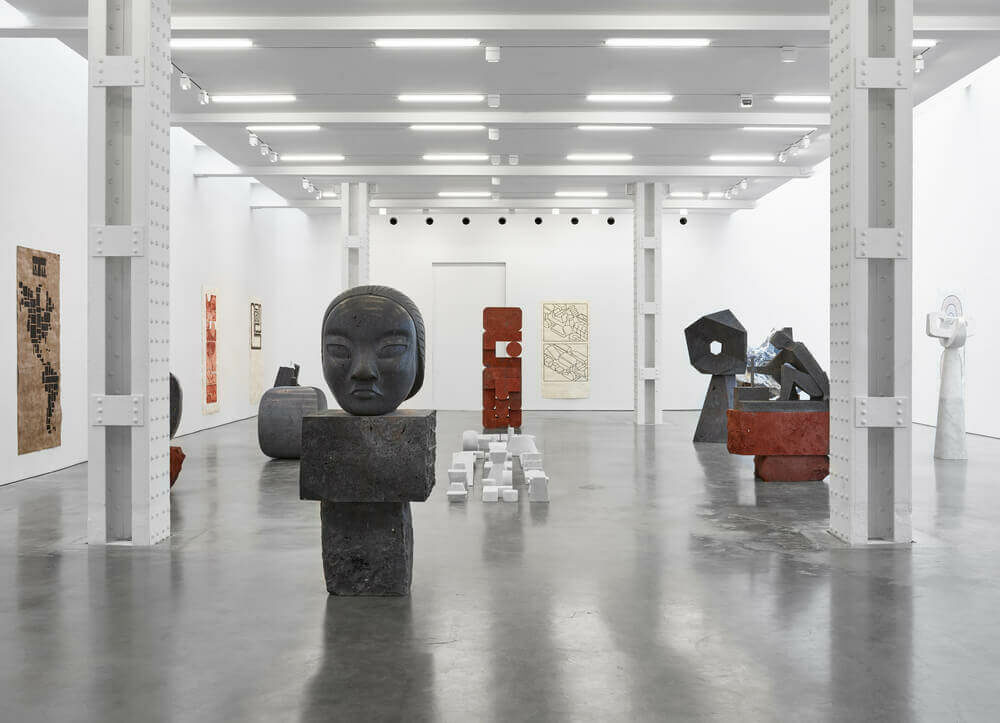 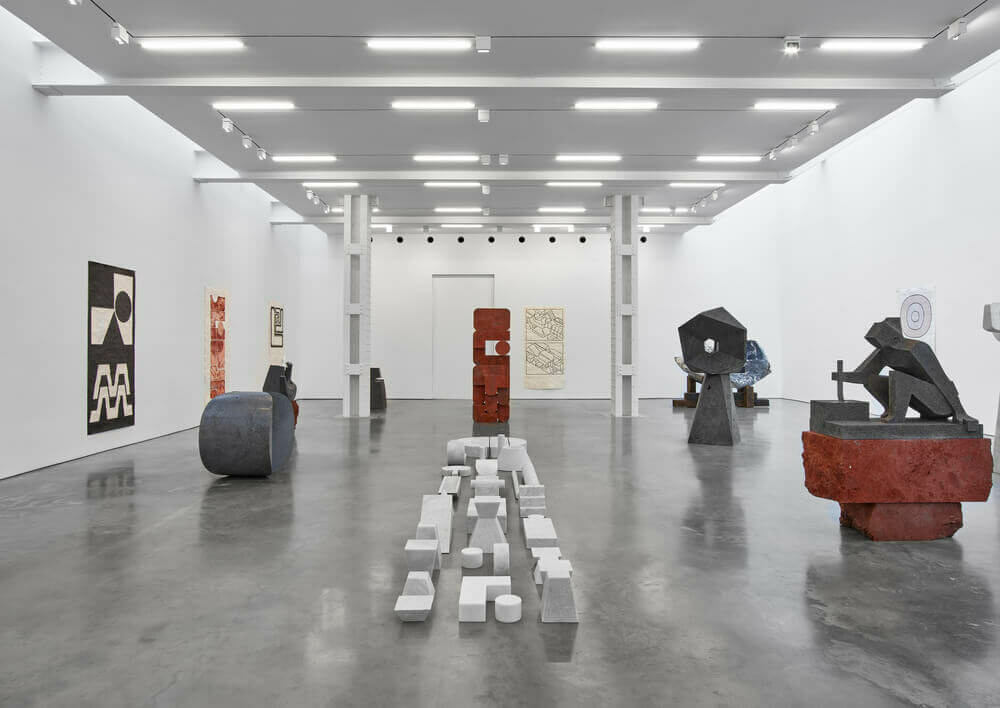 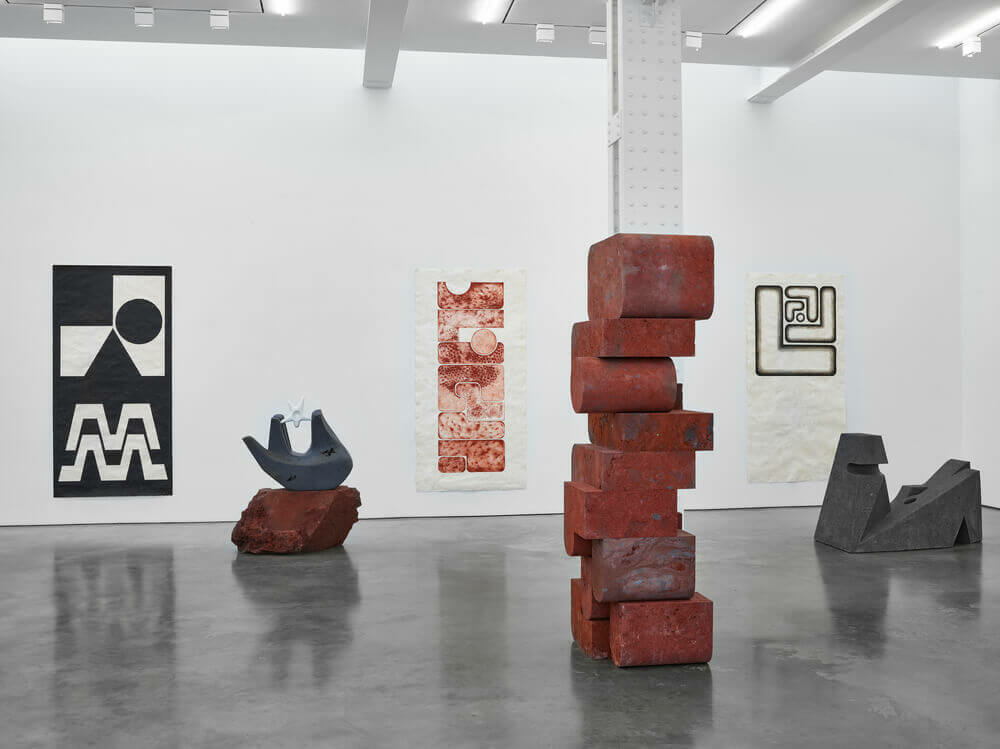 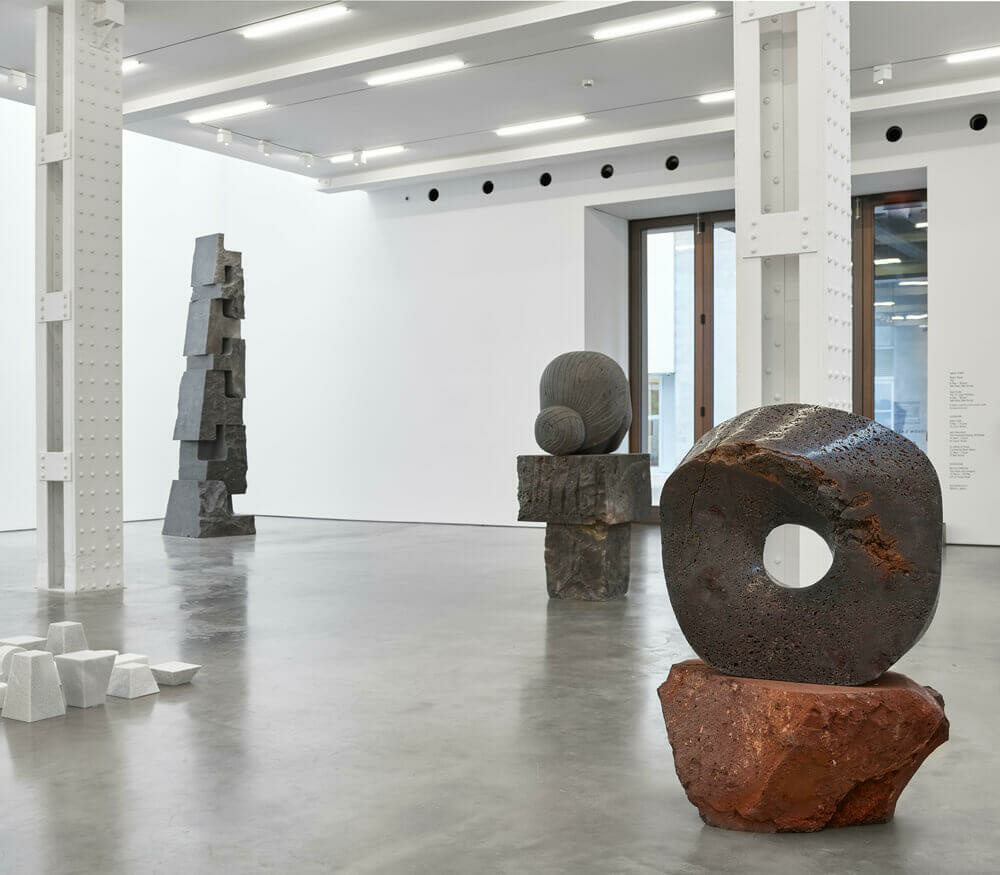 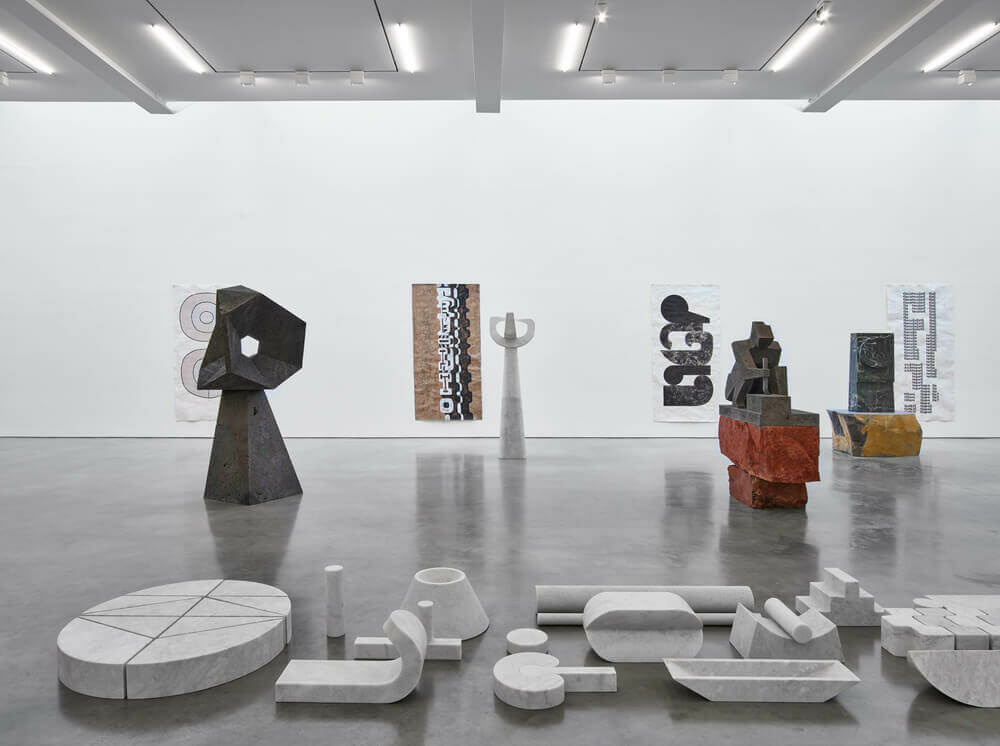 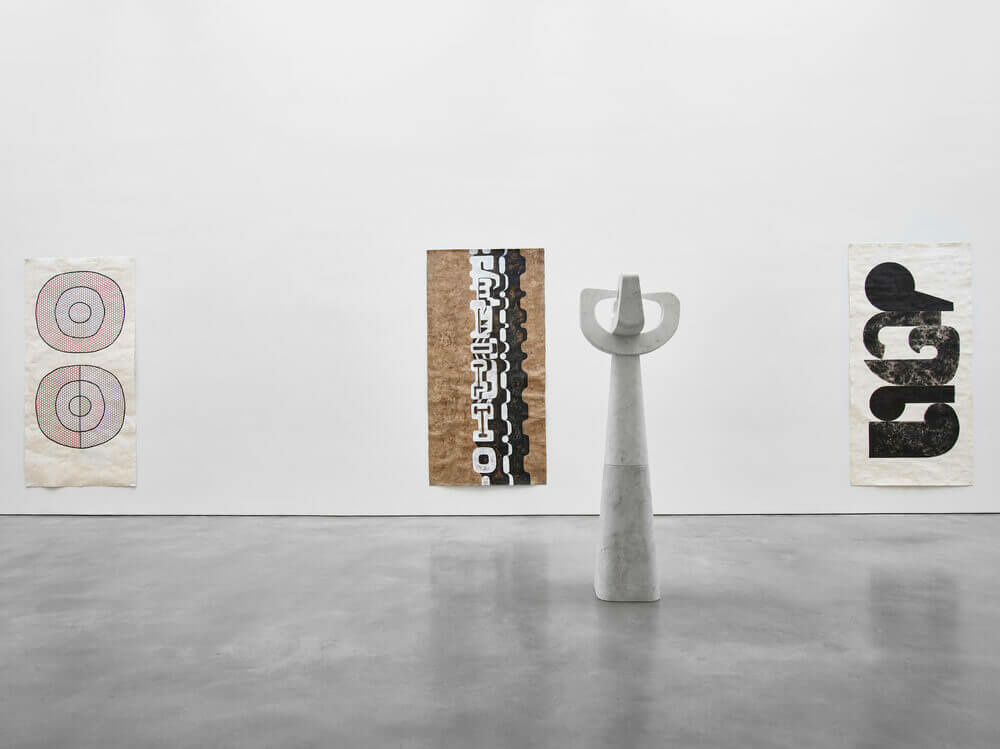 Internationally acclaimed artist Pedro Reyes returns to Lisson Gallery New York with Tlali, an exhibition featuring a new series of sculptures and works on paper drawn from the language and symbols of Pre-Columbian civilizations. Derived from the Aztec language Nahuatl, Tlali (translated as ‘Earth’), cites the perilous predicament of the continent’s name. In addition to the confusion between the United States of America and the larger hemisphere it occupies, the tainted name originates from conquistador Amerigo Vespucci, responsible for the enslavement and death of countless indigenous communities. The artist offers Tlali as an alternative, untainted, allegorical name for the continent. Featuring fourteen carved stone sculptures along with eleven drawings on amate, the presentation engages with Mayan, Olmec, Toltec and Mexica heritage and serves as a reminder of the very foundations of the American continent.

“It is imperative for a Mexican artist to learn Nahuatl,” says Reyes. “Proportionate to the use of Latin in the United States, many places in Mexico have a name in Nahuatl, so learning the language is vital to understanding the region’s geography and anthropology”.  The artist echoes this sentiment in Tlali, allotting each work a Nahuatl title connected to Pre-Columbian symbolism. Carving directly in stone, the Mexico City-based artist brings an ancient artistic practice to the fore while exalting a discipline that dates over thirty-five centuries. The sculptures displayed throughout the exhibition feature the distinct geometric vocabulary used to depict human figures or architectural models by the Mesoamerican civilizations. Using red tezontle, volcanic stone, jadeite, and white marble Reyes continues his deeply political practice through the creation of new totemic and abstract forms.

Coatl (snake), a volcanic stone work at 157 inches high, resembles the snake’s rattle movement. Where Eastern civilizations elected to meditate sitting, Pre-Columbian cultures opted for a peripatetic practice. Another totemic structure, Huehueteotl (the old god of fire), reminds of us of the monumentality of the classic Pre-Columbian sculpture Los atlantes de Tula, Toltec warriors that supported temple structures. Ueueyeyeko (ancient knowledge) is a series of marble carvings that symbolise the plethora of symbolic objects found at a burial site, serving as a commentary on how this act of detachment likely differs from our experience of offerings today given the importance placed on personal ownership. Mexican poet Carlos Pellicer once remarked that, “Mexican people have two obsessions. A sympathy for death and love for flowers”. In addition to Ueueyeyeko, Reyes references this notion in Xochitl (flower). The Pre-Columbian ruler and poet Nezahualcóyotl touches on the acute importance of the flower in Mesoamerican philosophy, offering it as a metaphor for the ephemerality of life.

The production and preservation of knowledge is also illustrated in Tlacuilo (scribe) – a personification of the painter, historian, poet and librarian – referencing the volume of historic information held in codices through pictograms. Reyes’ own obsession with knowledge can be seen in his extensive personal library in his studio in Mexico City, as well as through his recent social practice project where the artist activates libraries that are not yet set up to lend books. In the spirit of another work in the show, Olin (to move, earthquake), Reyes believes knowledge can only be attained if it is set in motion (through the movement of books, records and artworks).

The sculptural gathering is flanked on either end by eleven vertical drawings that continue the artist’s dialogue with Mesoamerican typology. The monumental works on handmade Mexican amate paper, bearing resemblance to political banners, serve as an index of language, an arrangement of symbols and patterns that mirror Pre-Columbian ethnology.

Accompanying the exhibition is a catalogue featuring an essay by Thomas B.F. Cummins, Harvard professor of Pre-Columbian and Colonial Art.