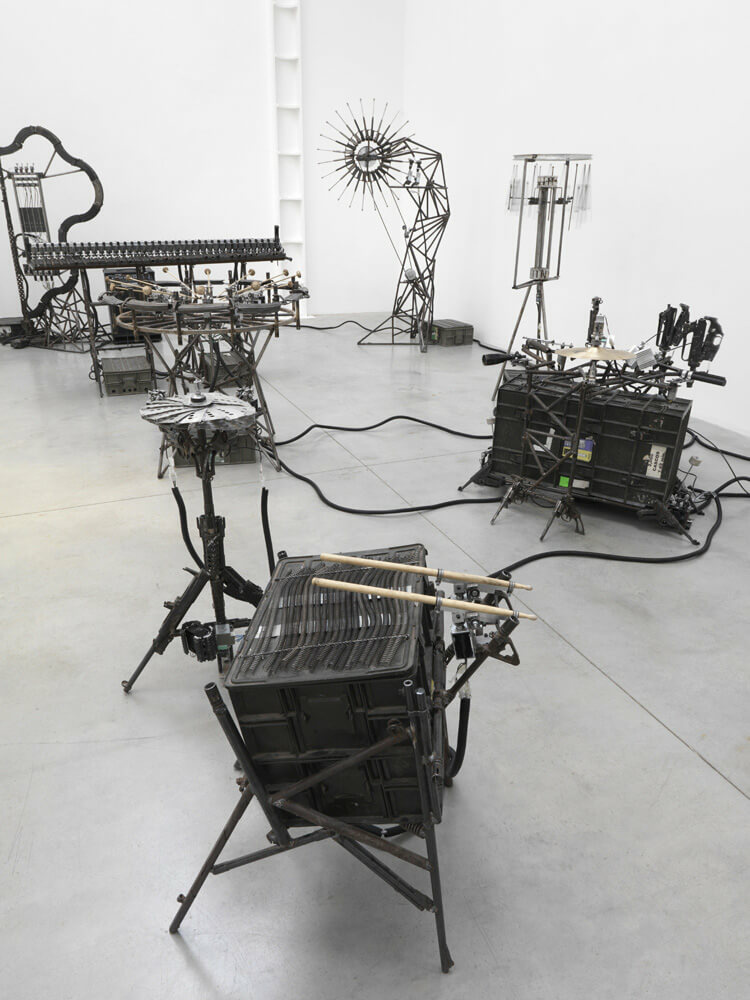 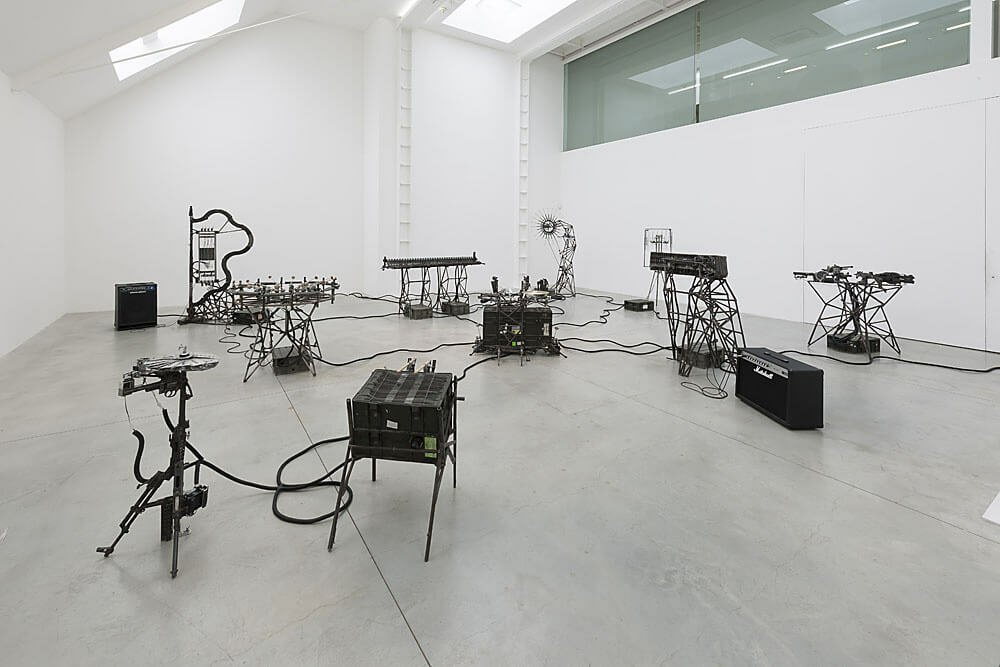 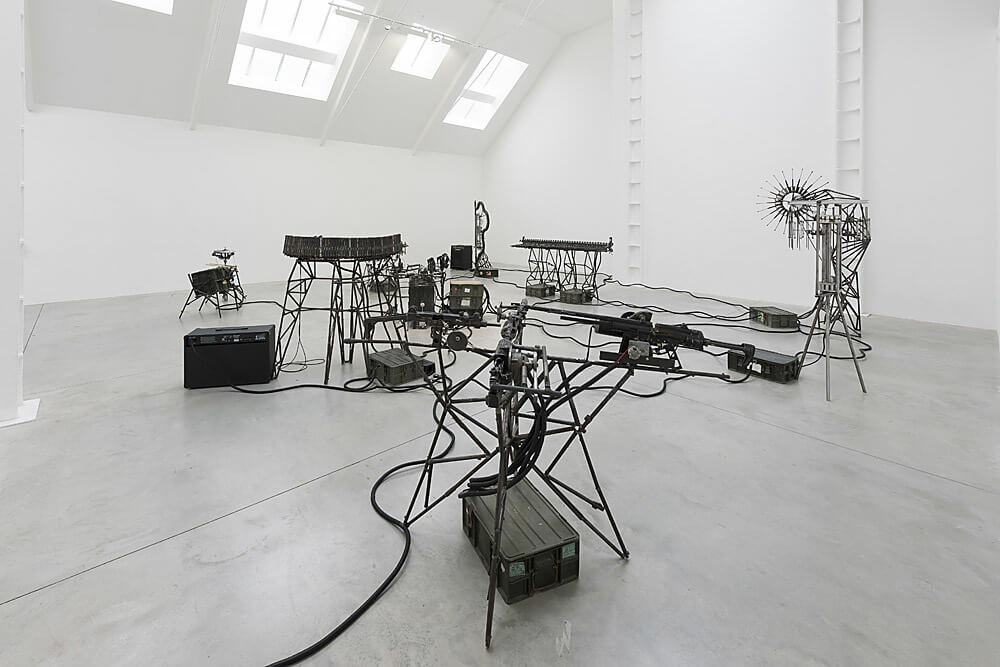 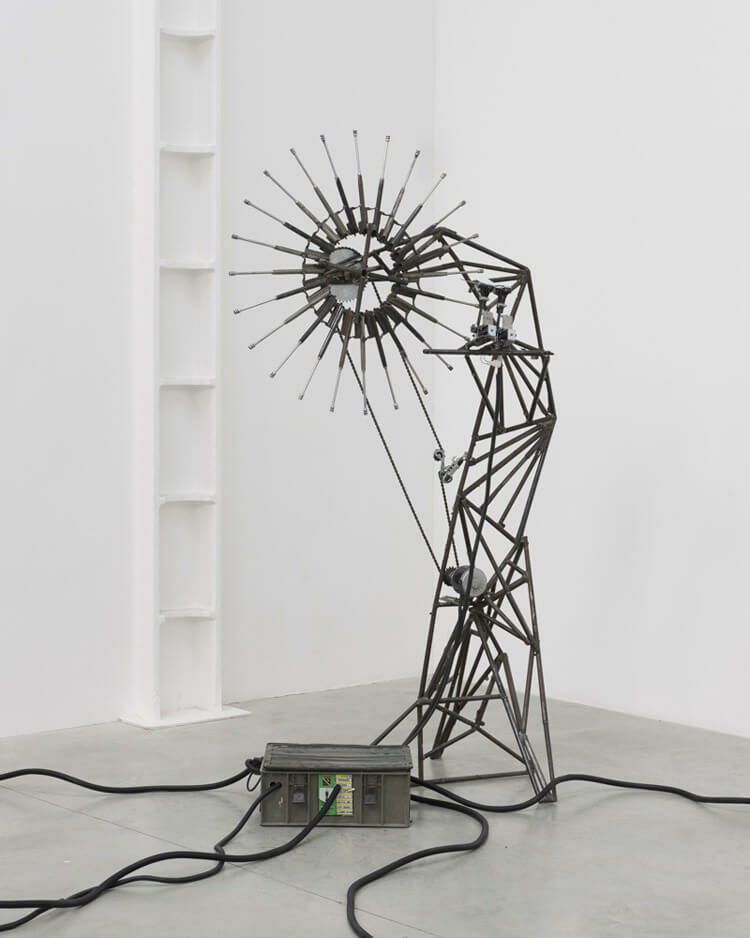 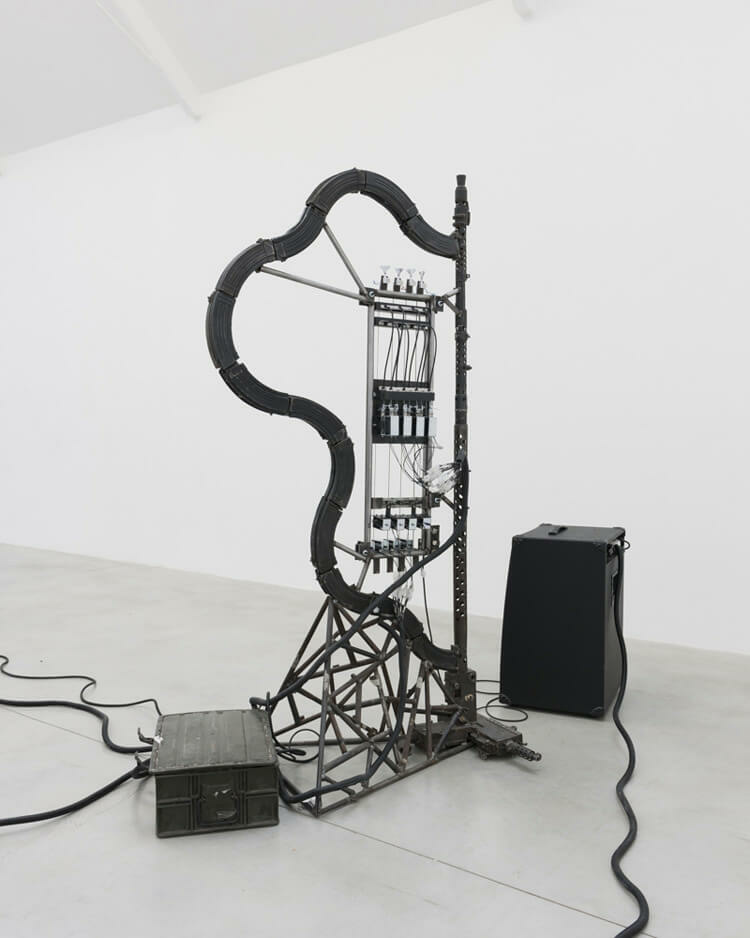 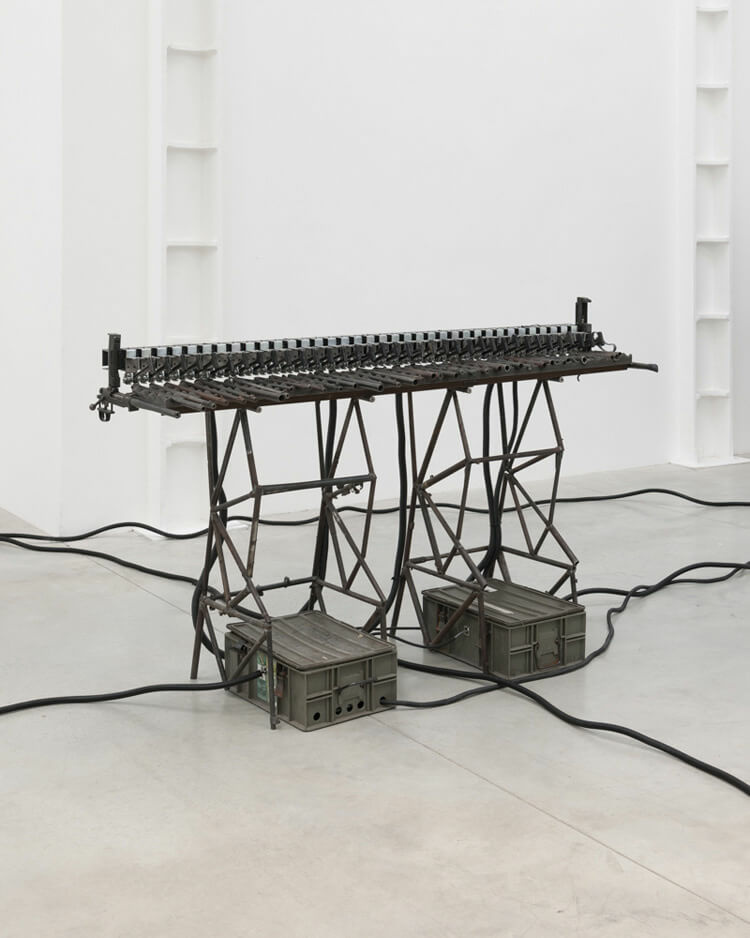 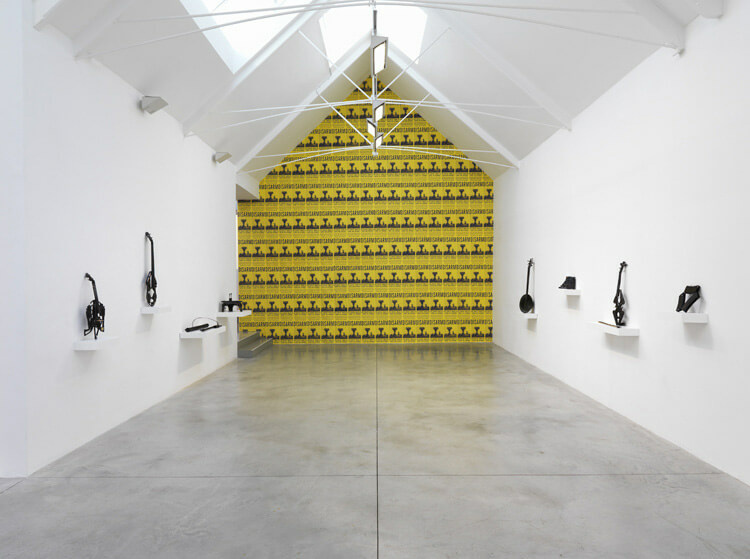 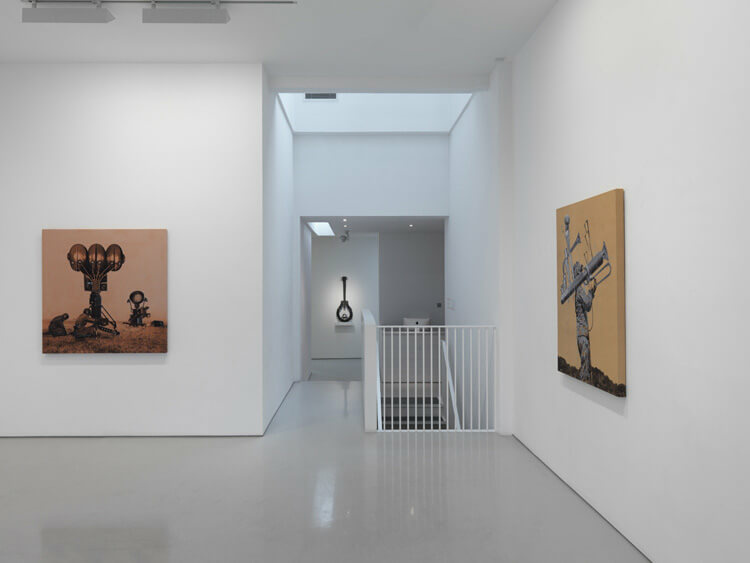 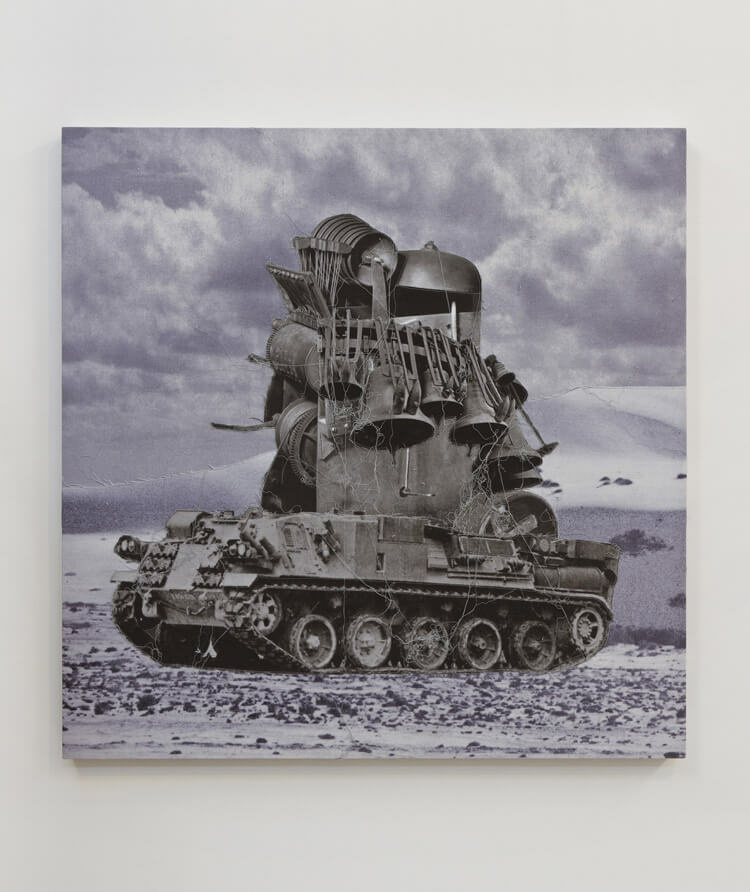 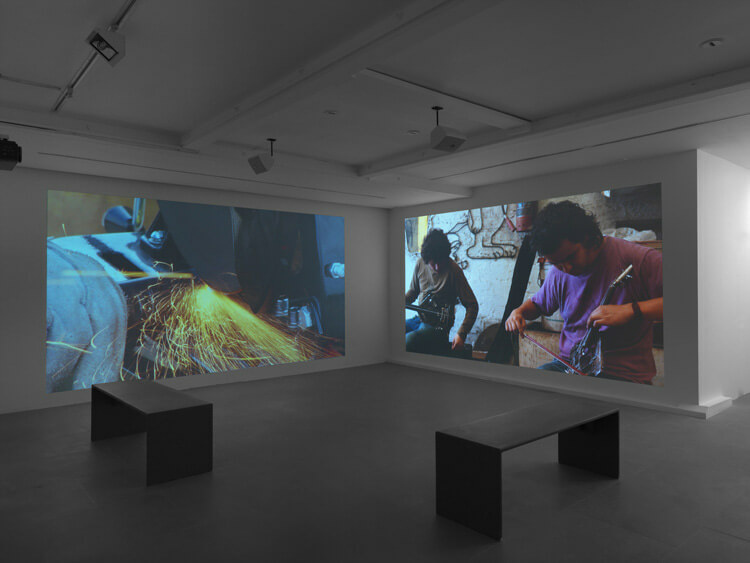 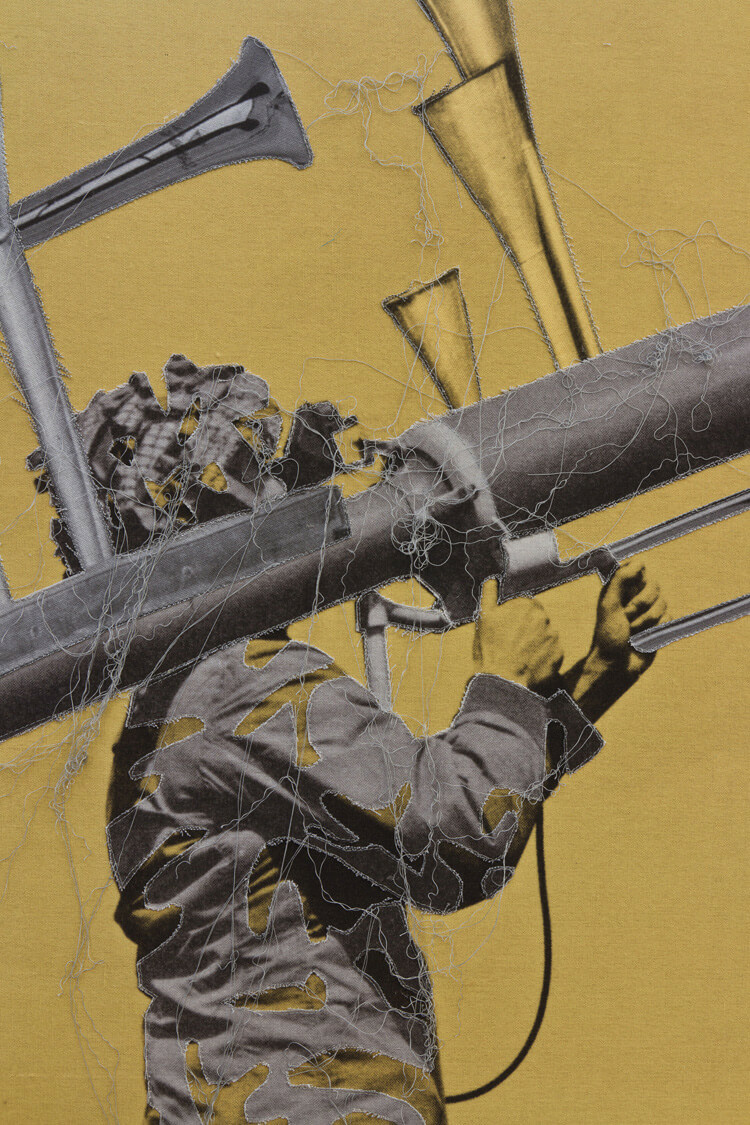 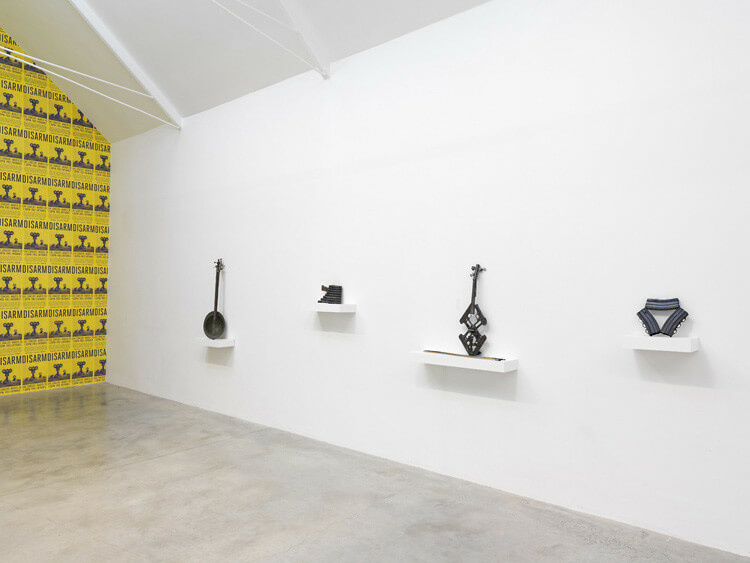 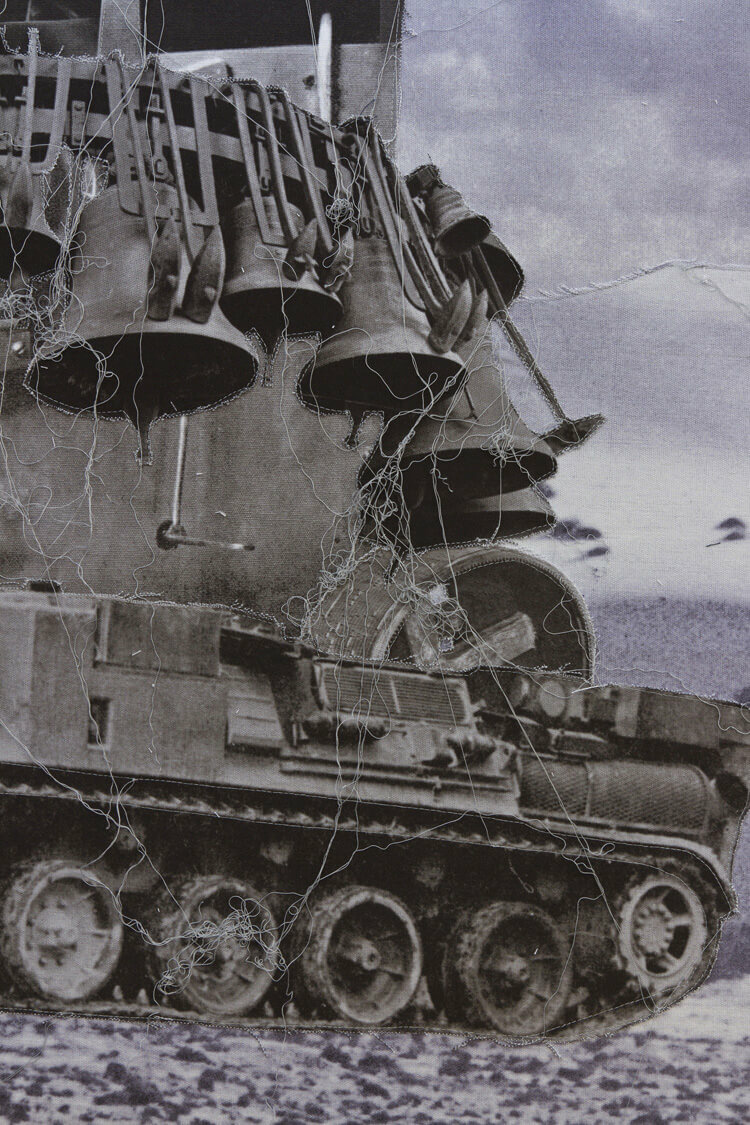 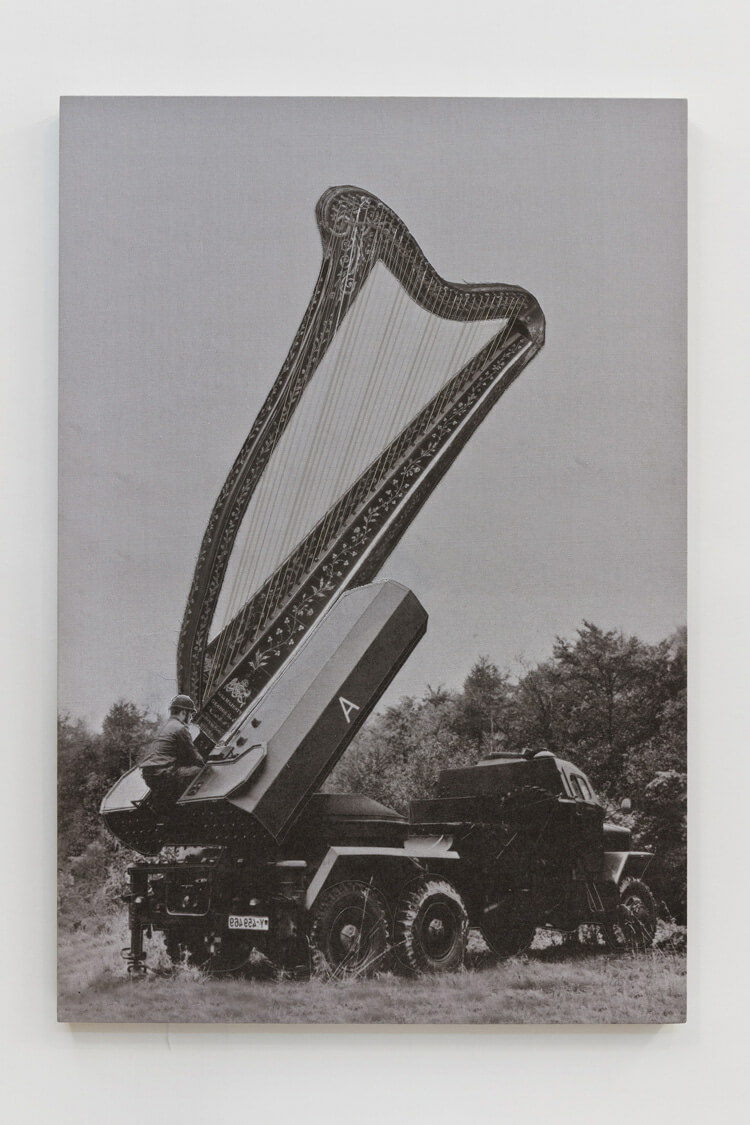 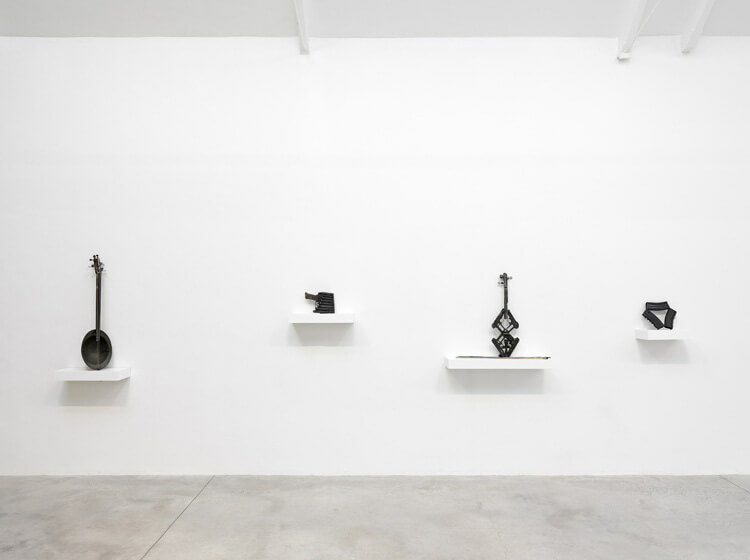 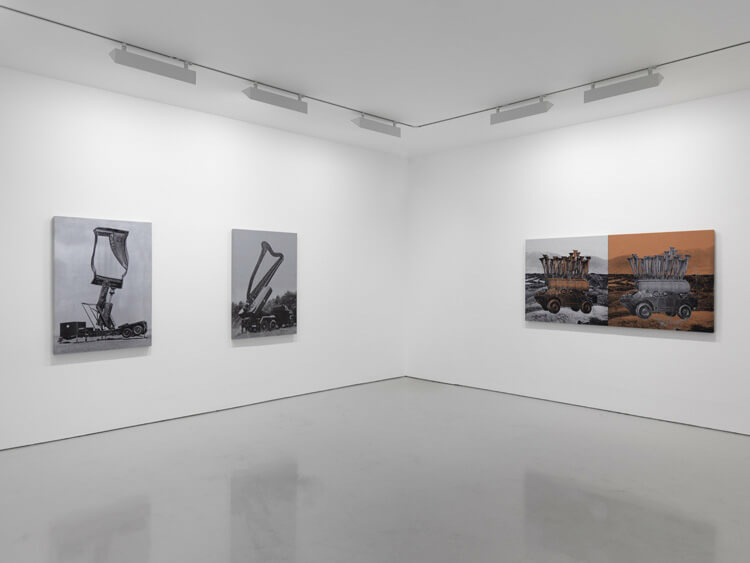 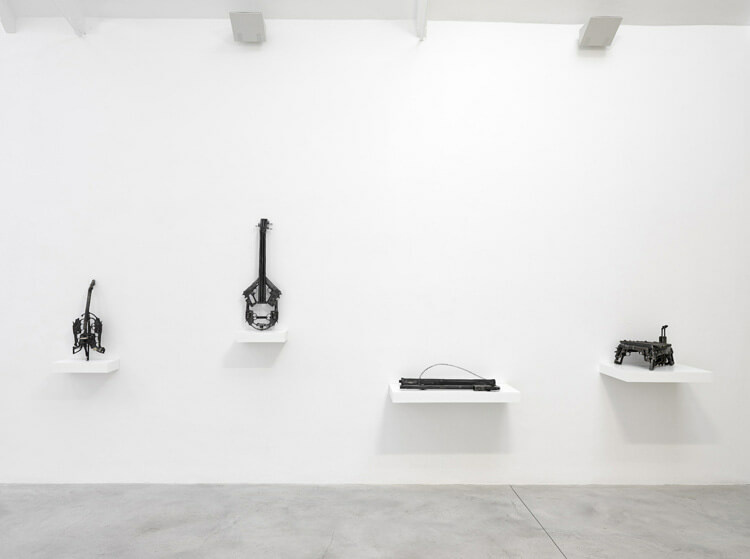 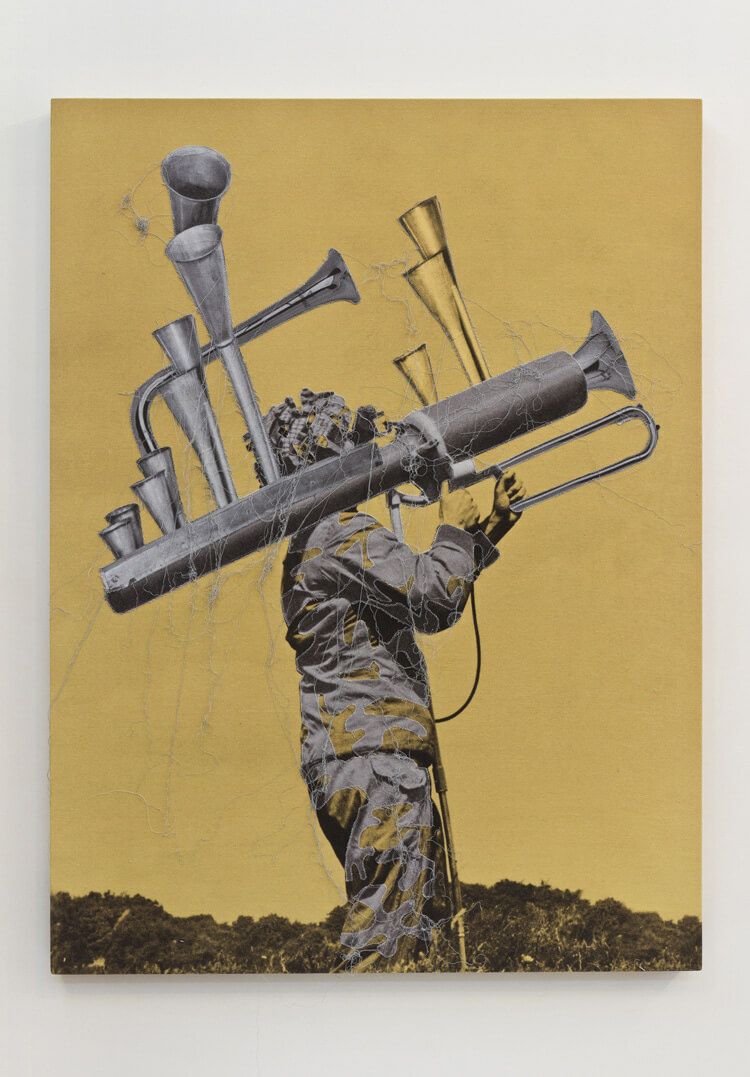 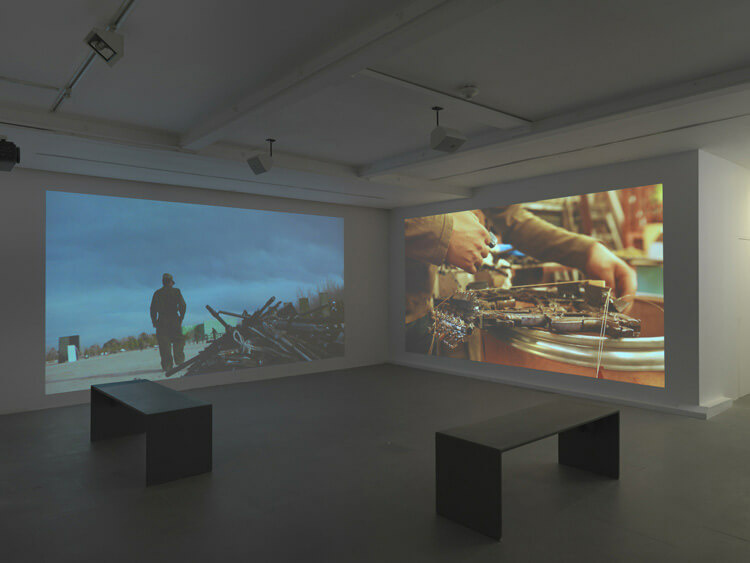 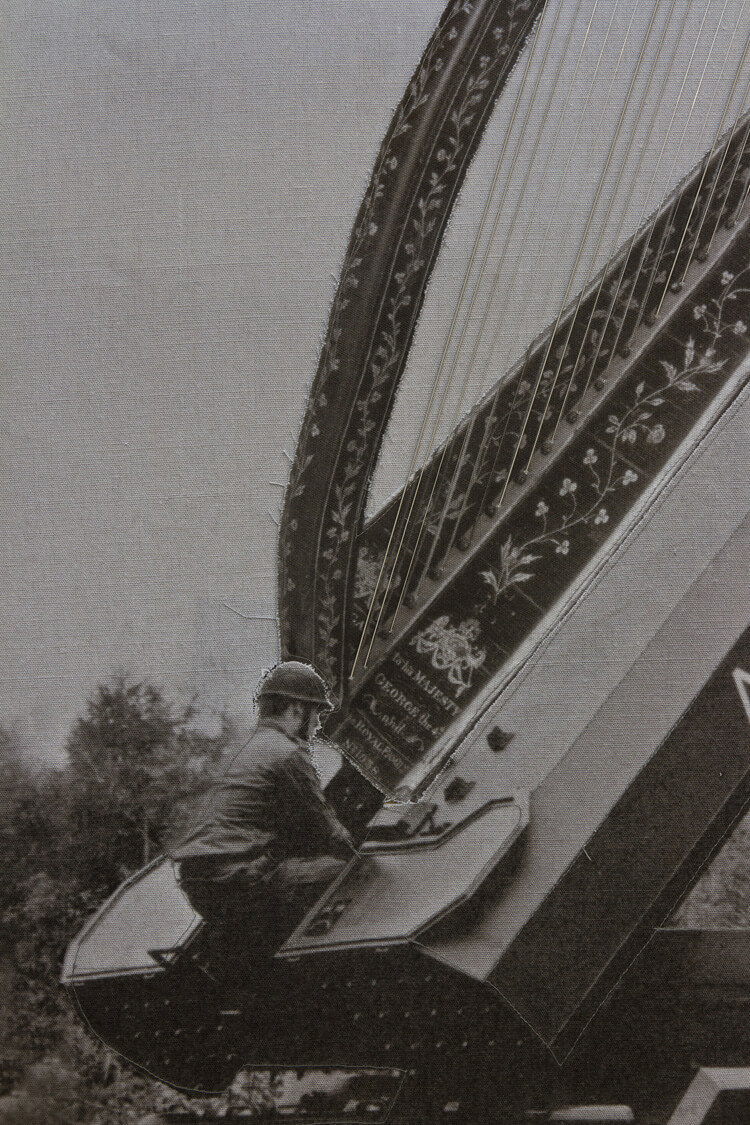 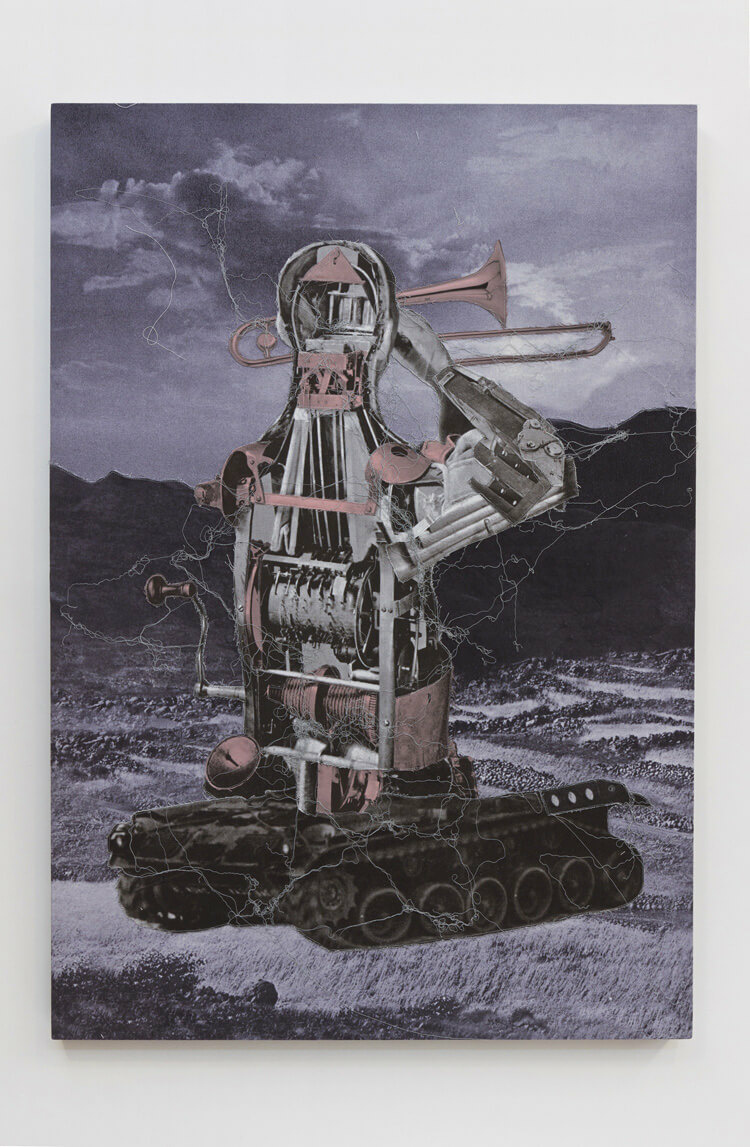 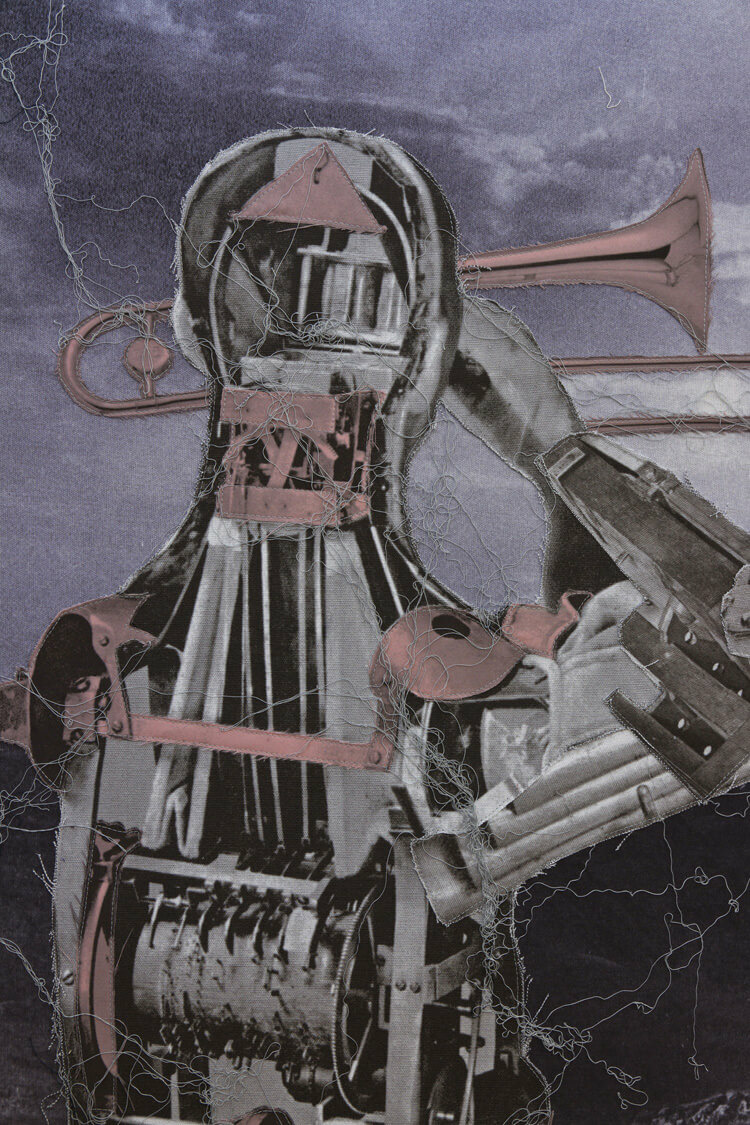 Disarm at Lisson Gallery is a solo exhibition by Mexican artist Pedro Reyes, comprising mixed-media works and a live musical performance relating to the artist's ambitious international project in which illegal firearms were used to fabricate musical instruments.

Pedro Reyes’ work is a socio-political critique on contemporary society and our responsibility towards it. His projects are catalysts for communal and psychological transformation, triggering group interaction and creativity.

The exhibition at Lisson Gallery includes musical instruments created from firearms, including revolvers, shot-guns and machine-guns, which were crushed by tanks and steamrollers to render them useless. These were offered to the artist by the Mexican government following their confiscation and subsequent public destruction in the city of Ciudad, Juarez.

From the 6,700 destroyed weapons he received from the Mexican Secretary of Defense, Reyes created two groups of instruments which will be exhibited together for the first time at Lisson Gallery. The first, a series titled Imagine, is an orchestra of fifty instruments, from flutes to string and percussion instruments, designed to be played live. The second, Disarm, is a never-before-exhibited installation of mechanical musical instruments, which can either be automated or played live by an individual operator using a laptop computer or midi keyboard.

For Reyes the process of transforming weapons into objects of positive utility "... was more than physical. It’s important to consider that many lives were taken with these weapons; as if a sort of exorcism was taking place, the music expelled the demons they held, as well as being a requiem for the lives lost.”
Reyes has in turn collaborated with producer and musician, John Coxon (Spring Heel Jack, Spiritualized, About Group, Treader) to compose music and produce a record using instruments from the Imagine series. The result is a limited edition vinyl LP featuring Coxon performing alongside six musicians well known on the improvisational scene: Eden Bull, Rupert Clervaux, Beatrice Dillon, Charles Hayward and Ashley Wales. On the opening night of the exhibition they will perform tracks from the album live at Lisson Gallery. The LP includes a publication that documents the various steps of this expansive project and also features an essay by Jessica Berlanga Taylor on Reyes and an interview with Tina Kukielski, co-curator of the Carnegie International. Copies will be displayed at the gallery throughout the duration of the show.
Following the opening night performance, the Disarm instruments will intermittently perform in the exhibition space as mechanical musical automatons. The nine instruments that compose this installation were created by Reyes in collaboration with Alejandro Machorro, founder of media studio COCOLAB, Mexico, and musicians Edi Kistler and Julián Plascencia.   A series of collage paintings, Machine Music, present a utopian vision of a world in which heavy artillery has been converted into instruments of ‘sonic warfare’, with soldiers fighting in the field with musical instruments as their weapons. These surreal, science-fiction scenarios critique the ease with which radical developments in early 20th Century technology were swiftly appropriated by those finding new ways to kill more efficiently.
Disarm will be Reyes’ first show with Lisson Gallery and his first solo show in the UK. In July 2013, his ongoing performative project Sanatorium, last seen at dOCUMENTA 13, will form part of a major group exhibition at the Whitechapel Gallery. The gift of destroyed weapons from the government came as a result of the popularity of the artist’s earlier project, Palas Por Pistolas, in which 1,527 guns owned by the residents of Culiacán were melted down into 1,527 shovels, which were then used to plant 1,527 trees around the world. Reyes chose to plant a tree with one of these shovels on Mabley Green Meadow, Hackney, after The Serpentine Gallery invited him to the UK as part of the Map Marathon.
Disarm is a demand for towns and cities across the world to relinquish their weapons and transform them from agents of death to agents of life. It is an attempt to highlight the invisible violence that underpins the international industry of death and suffering: the commercial and government complicity that allows for weapons to be made and sold by public companies for shareholder profit; the laws banning assault rifles which go neglected; and the films and video-games which depict trigger-happy heroes. For Reyes, an idealist whose projects affect real change and are often explicit attempts to improve the society around him, a world free of guns is a human right, and a utopian ideal to which we should all aspire.