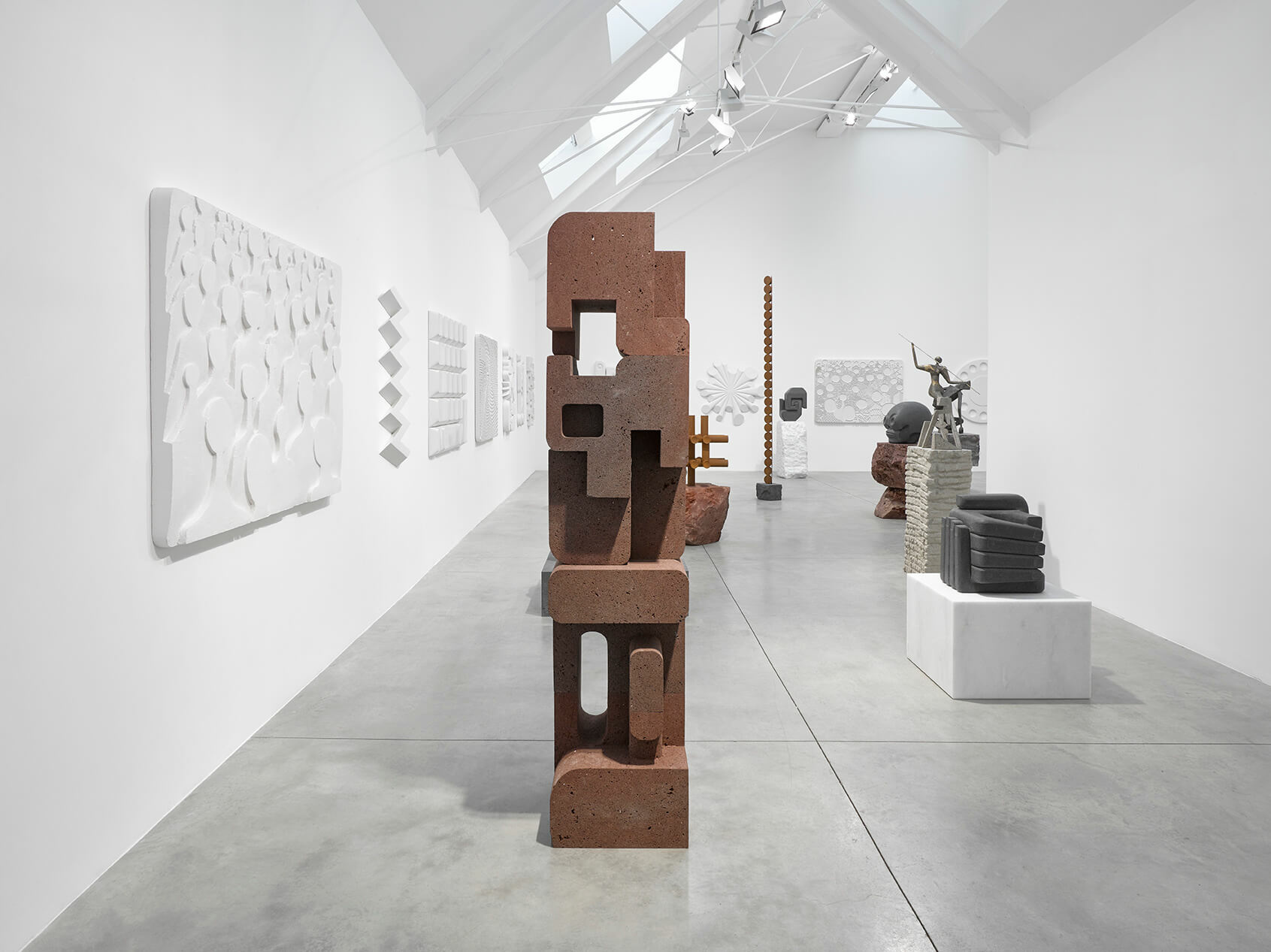 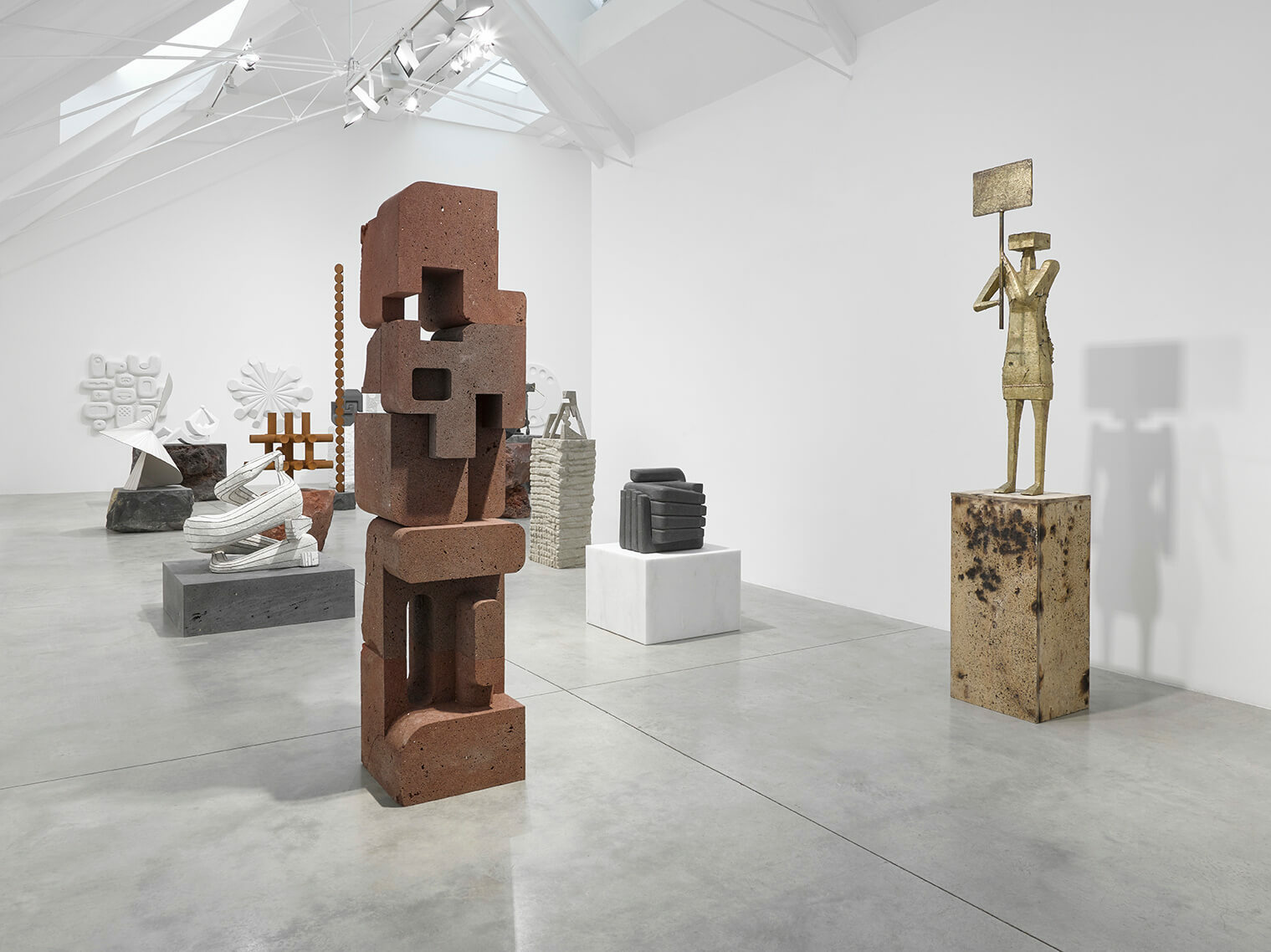 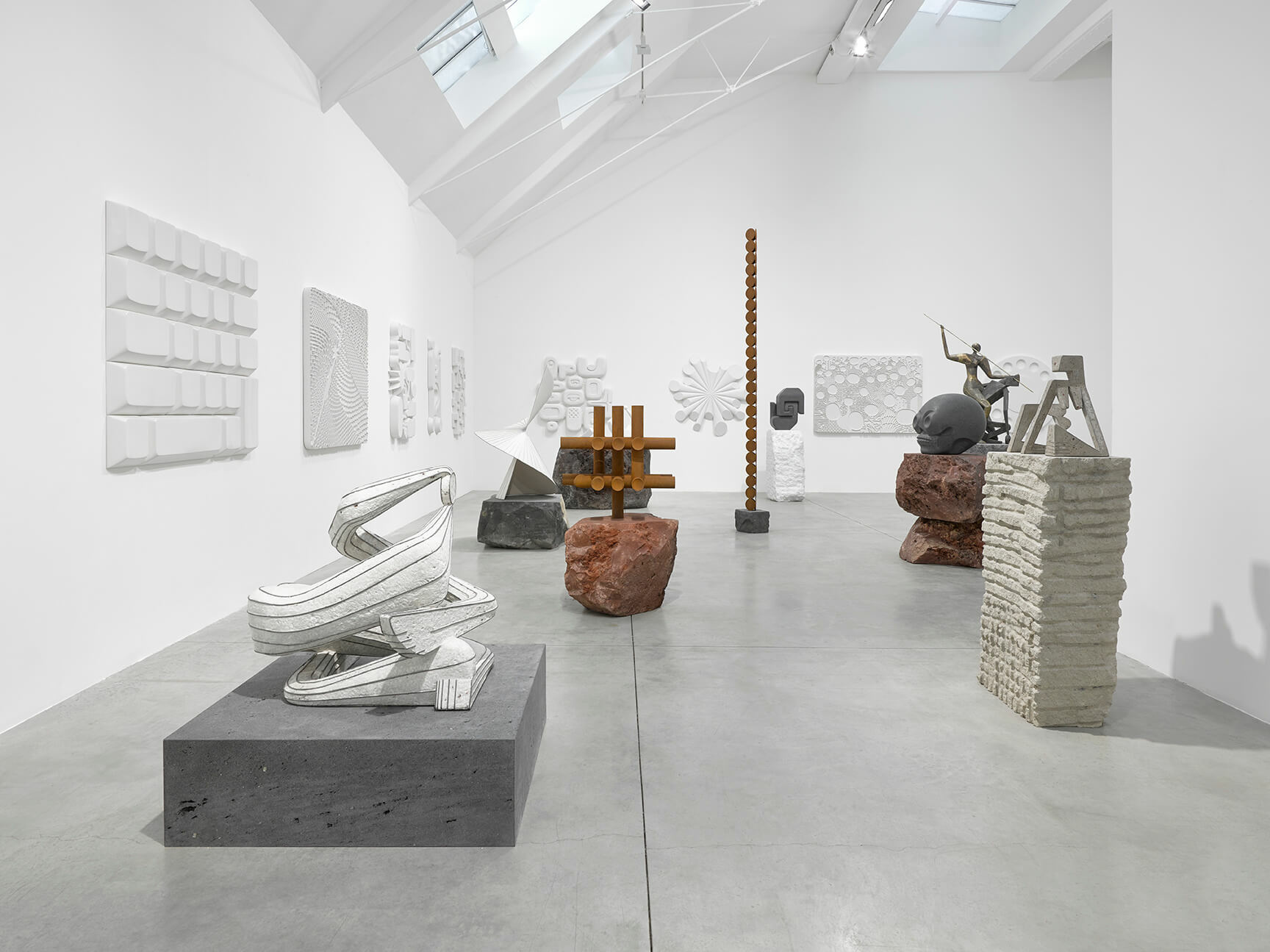 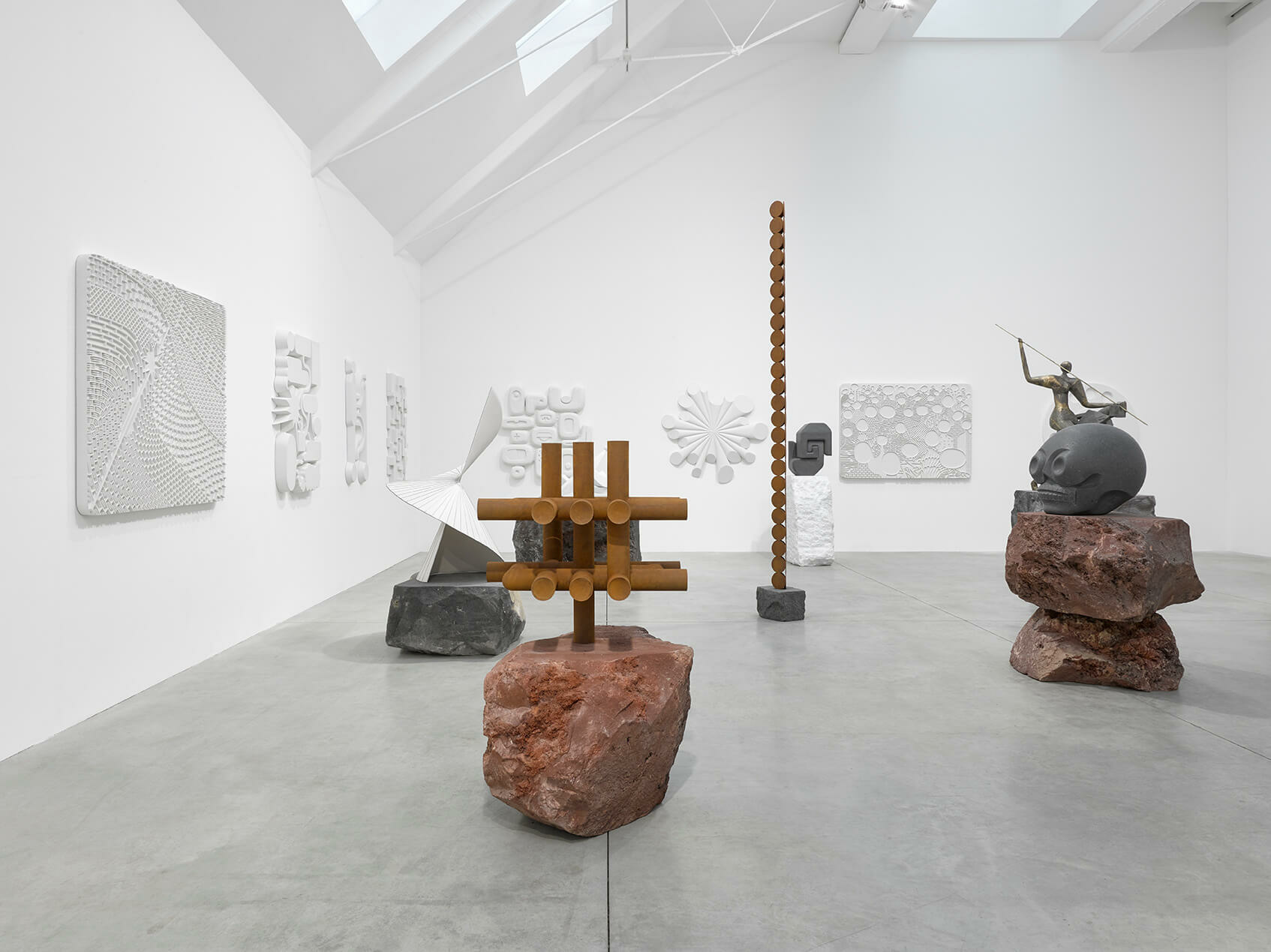 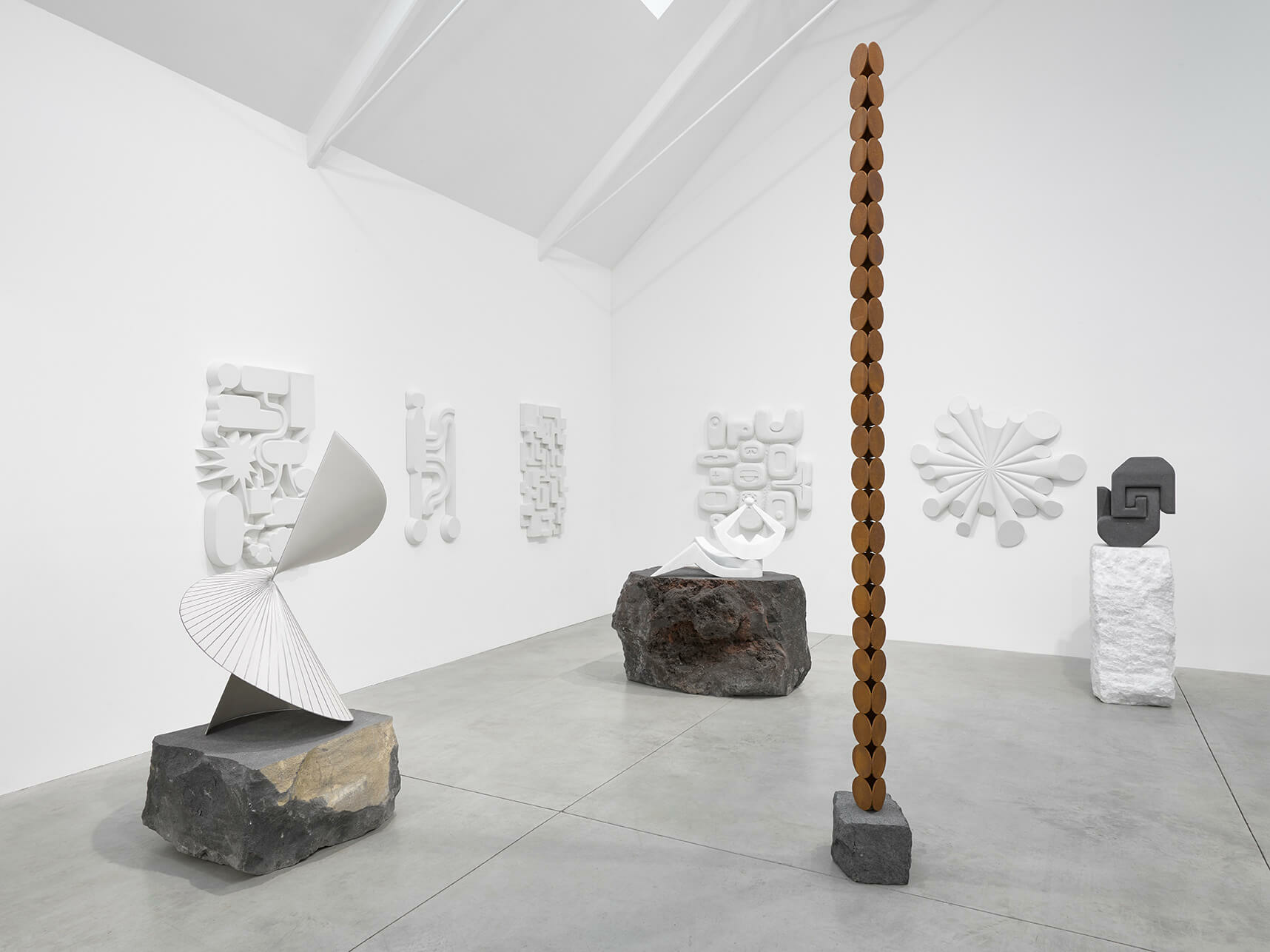 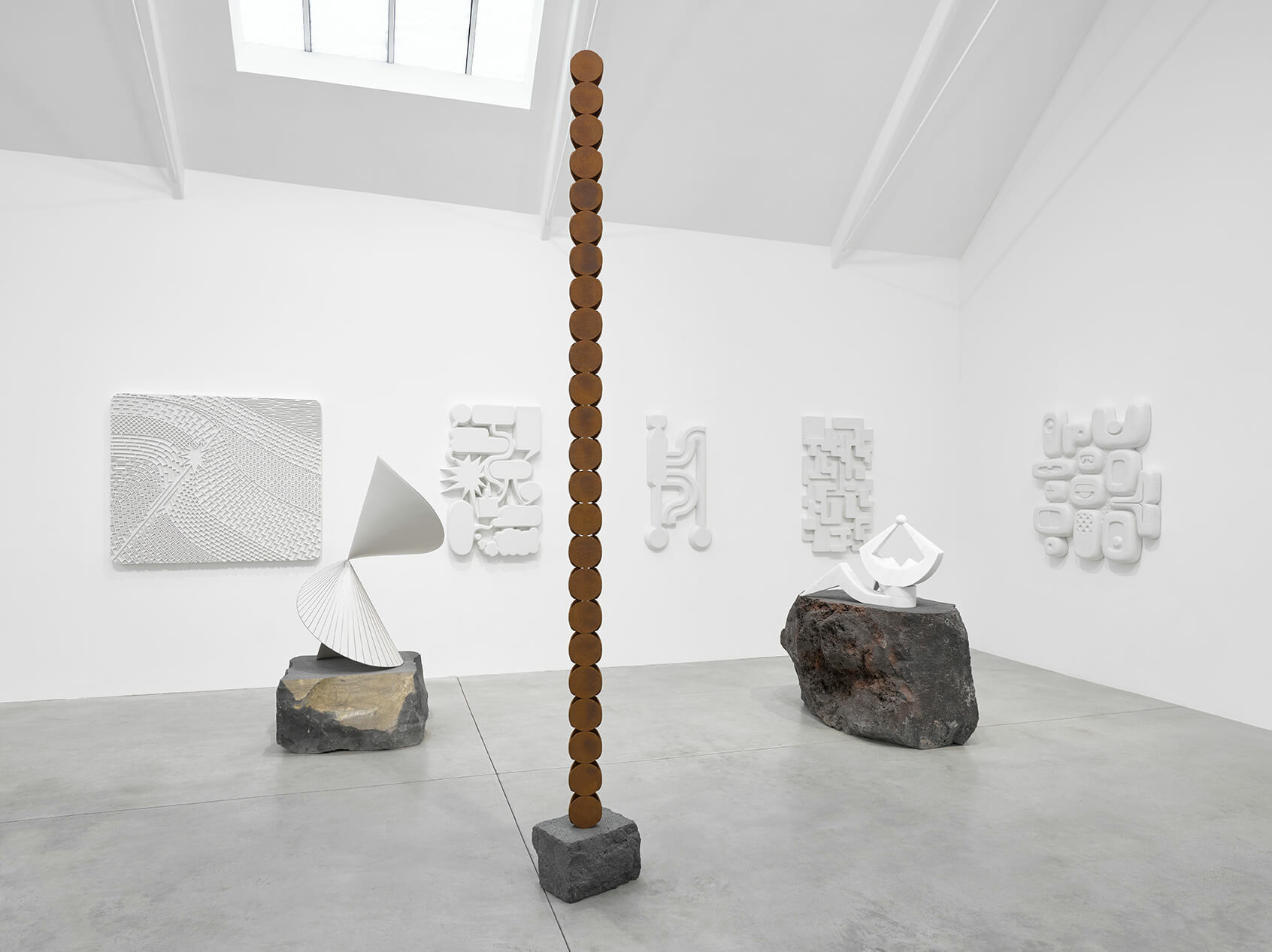 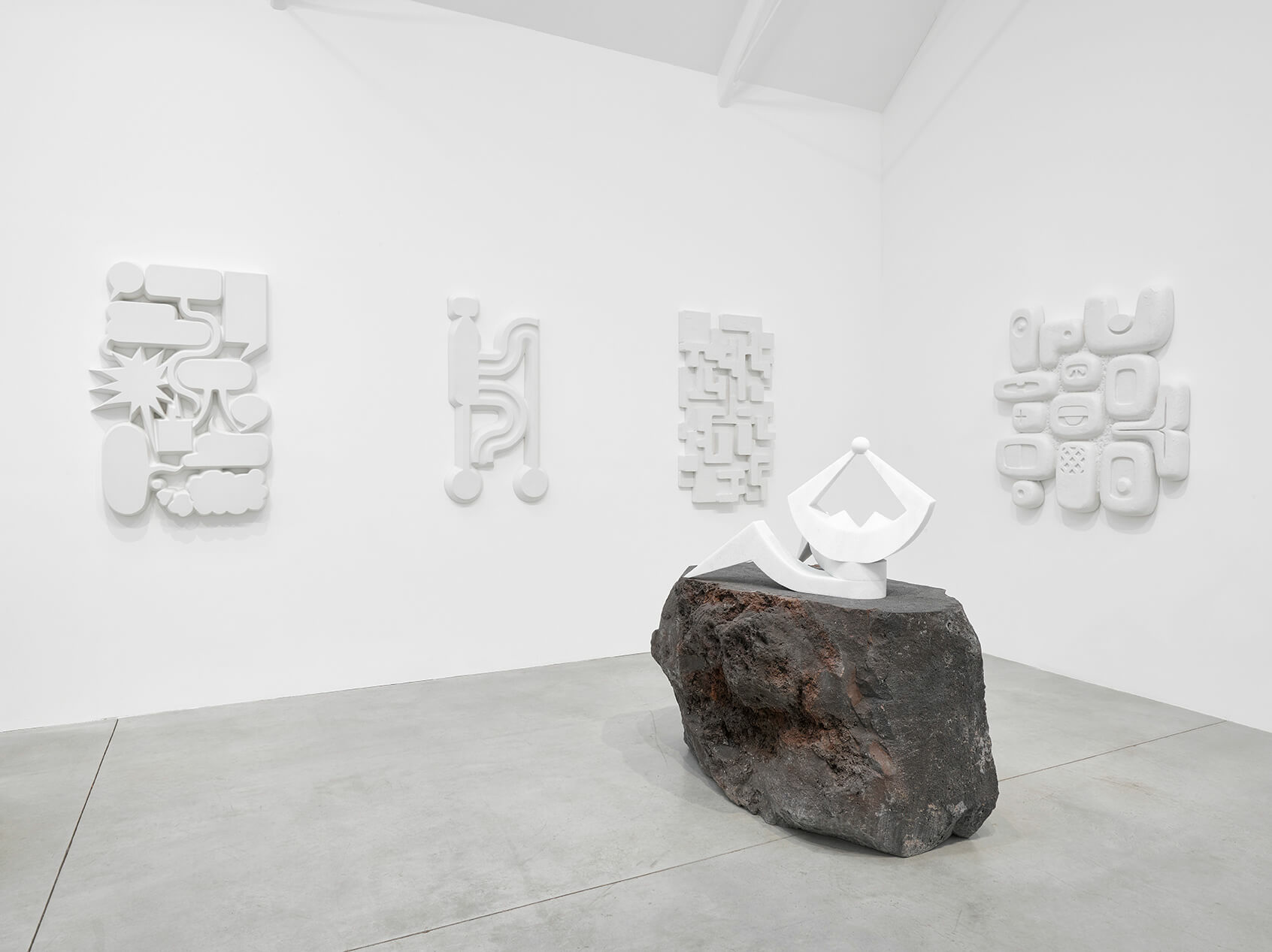 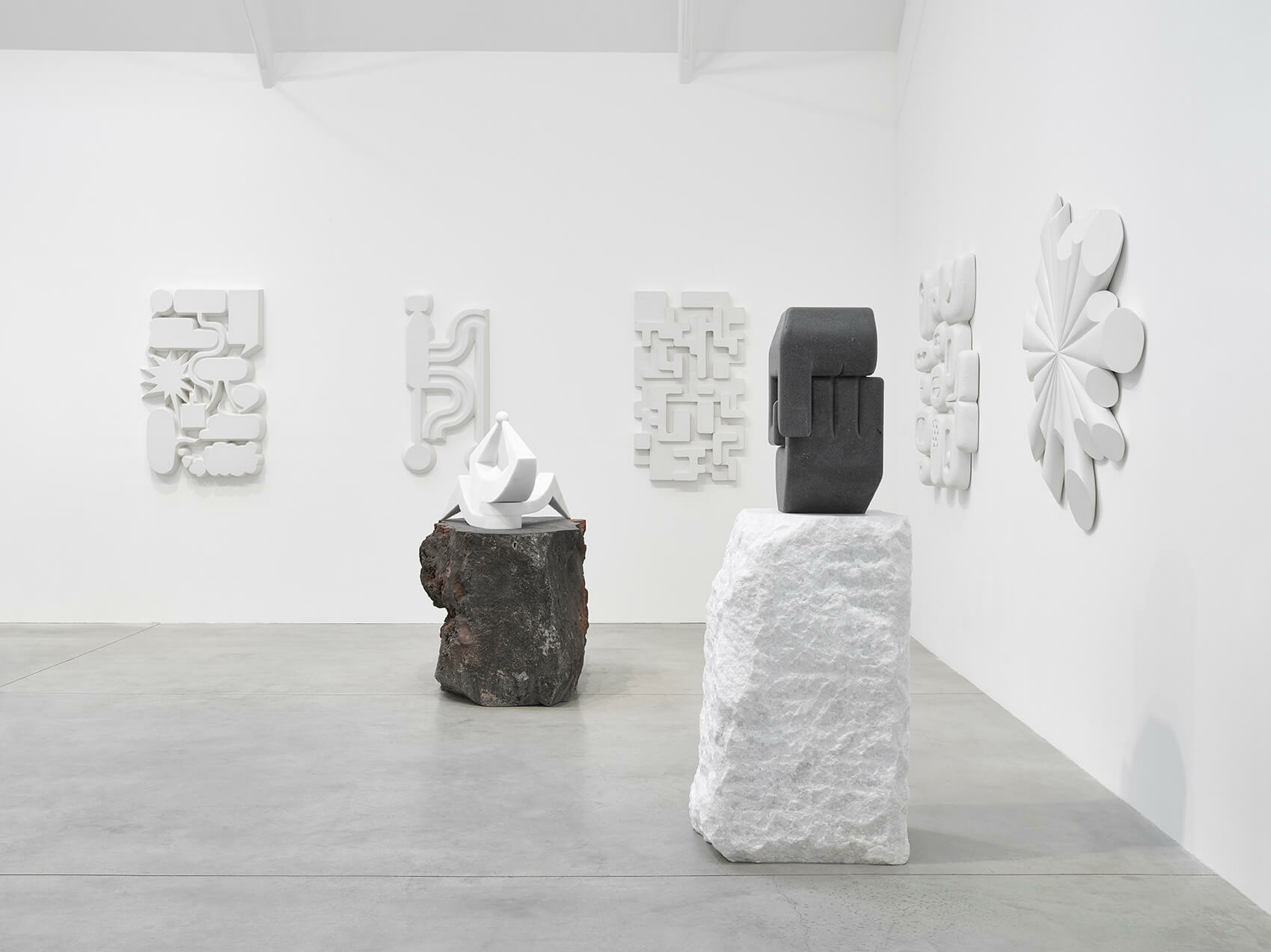 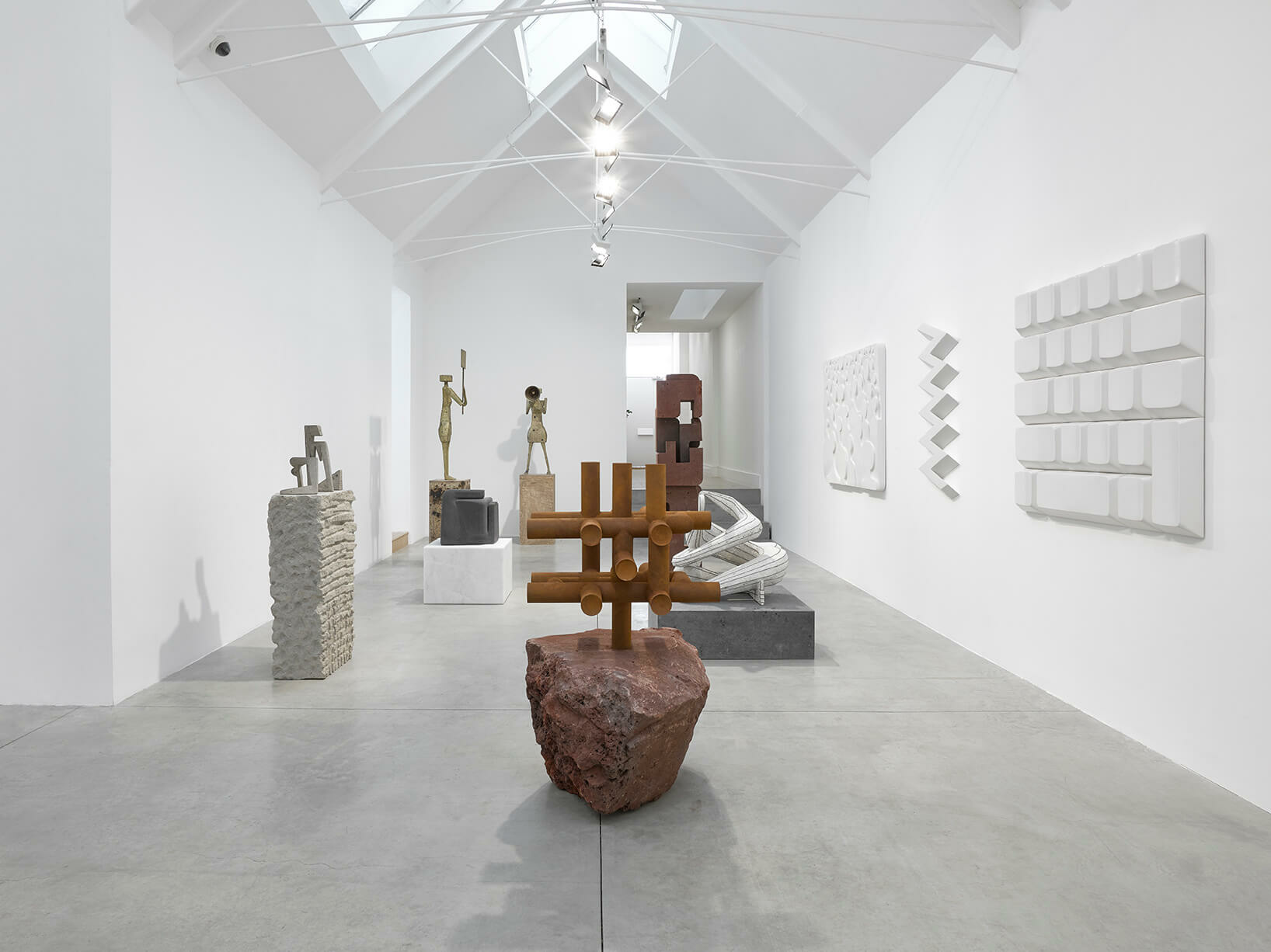 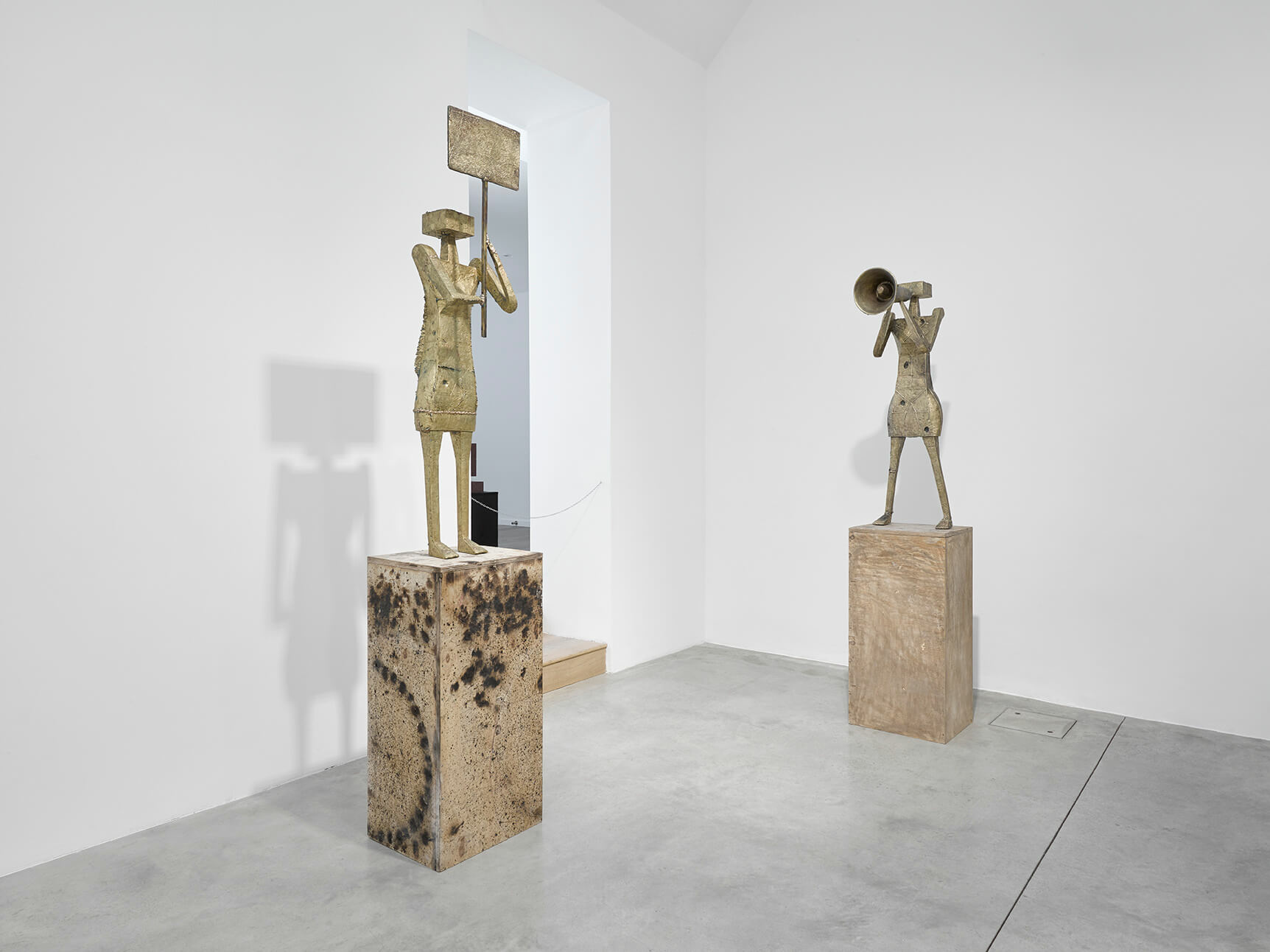 For his first London exhibition since the acclaimed ‘Disarm’ in 2013, Pedro Reyes returns with a fictional, pan-historical museum of sculpture, or a glyptotek, from the ancient Greek term for a cache of classic statuary. As well as a meditation on art history, these works explore both figurative and abstract approaches to sculpture, through materials including volcanic stone, marble, bronze and steel and through series such as The Protesters, of which the artist has stated:
“Most statues commemorate an historical event, or the life of an influential person… Given the current political climate, I envisioned the anonymous protester as the incarnation of a contemporary hero, taking to the streets as an act of resistance.”

Among the images of revolt is the sculptural duo of Versus Machina (all works 2017-18), in which a female figure impales a robot with a spear, perhaps echoing the pose of St George vanquishing a dragon or antiquity’s dynamic ensemble of Laocoön and his sons. This vision of humanity fighting a machine is connected to a course Reyes taught at MIT, entitled The Reverse Engineering of Warfare: Challenging Techno-optimism and Reimagining the Defence Sector, in which he criticised the systemic belief that all problems can be solved with technology. Cast in bronze from a concrete original, Versus Machina also bears the scars of real damage, incurred during Mexico’s earthquake of September 2017, for which Reyes returned to his architectural training to help a rapid response team of 100 architects shoring up buildings under the banner of ReConstruir México.

A number of stacked towers and interlocking sculptures continue Reyes’s use of totemic forms, exploring not only geometry and abstraction, but also the legacy of Modernism, in works such as El quinto sol [The Fifth Sun]. These are complemented or contrasted with bust-like lava stone carvings influenced by pre-Columbian forms, Olmec heads and post-revolutionary Mexican statues, distilled down to works such as Calavera [Skull], and Encounter. Two other works, Seer, and Jaguar, are sculptural representations of synaesthesia: an eye emerging out of a mouth, and its opposite, a tongue emerging out of an eye.

Finally, this sculptural gathering is foregrounded by a series of friezes running behind; three-dimensional wall reliefs that act as a coda to many of Reyes’s current concerns. Along this polyphonic array are a babble of speech bubbles (relating to a suite of social sculptures entitled Colloquium); a computer keyboard and a man on a bicycle that recalls pictograms from the 1968 Mexico Olympics, as well as an on-going project in which Reyes travels around on a pedal-powered food cart promoting an insect-based source of protein. This show, presented in an accompanying booklet, includes not only the objects needed to populate an encyclopaedic ‘Glyptotek’, but an array of symbols and glyphs that constitute part of Reyes’s rich and ever-growing iconography, which has itself been surveyed in a new book ‘Ad Usum/To Be Used’, published by Harvard University Press.