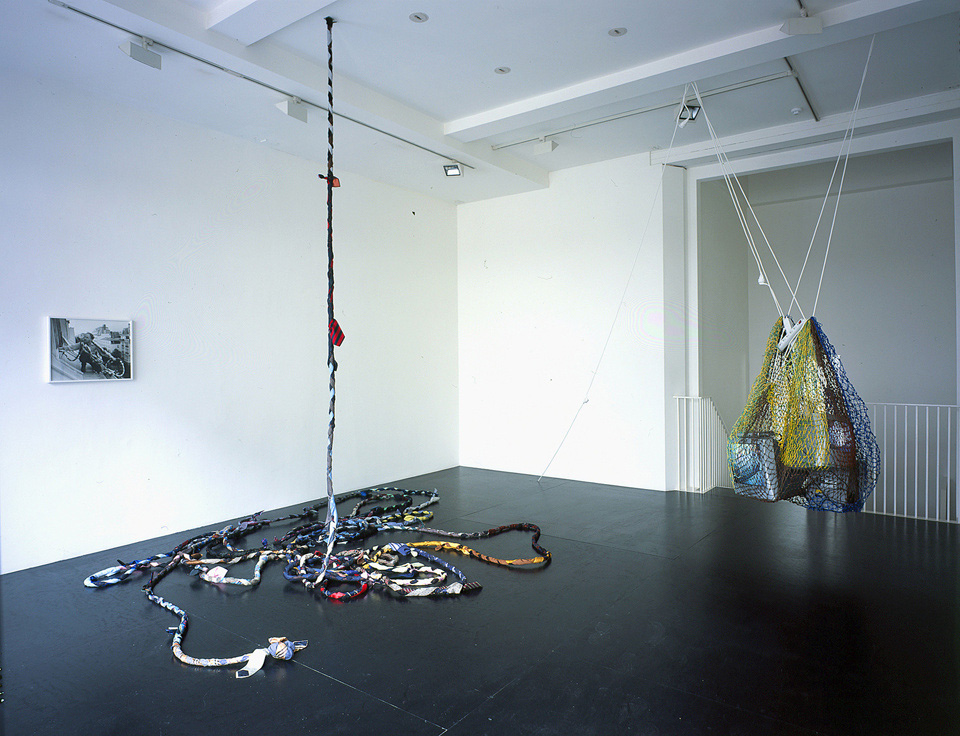 “Before nightfall, a male figure appears on a shingle beach. Although dressed smartly, it is hard to define the quality of his apparel – he could be anything from a city worker to a vagrant. His actions on the shoreline seem determined and purposeful. He is manufacturing a fishhook from his house key using his toenail clippers as the cutting and filling tool. Later he will combine more of his belongings – a cufflink and an identity tag to make a shiny artificial fish lure. Finally he winds telephone cable around his shoe to improvise a fishing reel. He is ready to begin fishing, although he must hurry if he is to catch his supper before the light fades.”

Mark Hosking’s sculptural work is often described through narrative. Objects, remade and transformed by the artist, are seen as the residues of scenarios of self- preservation and redemption from adverse and unexpected situations or disasters. Another dimension to Hosking’s practice rebels against the fixed status assigned to objects within western consumer society through challenging their former use- value.

In the ground floor gallery at Lisson New Space, two works are exhibited in binary opposition. A rope made out of city-workers’ ties signals freedom and an improvised means of escape, while in Net/ Gain/ Loss, 2004, a net made out of extension cable is suspended from the ceiling and supports a TV monitor with footage of a person caught. This opposition of capture and freedom could be understood as a metaphor for the liberating process of object transformation that frees materials from their predetermined systems in Hosking’s pieces.

In Perfume SOS Lamp 2004, a distress-signalling lamp is made from a perfume bottle, a spoon and a pair of reading glasses. The spectacles and a spoon are used to concentrate the light from the burning, perfumed-fuelled wick and the dark lens from a pair of sunglasses intermittently blocks the beam to signal for help.

Hosking evokes a disquieting conversation in Shoe Morse 2004 when a man and woman make a pair of Morse code handsets out of their formal shoes. The couple converse with one another via the de-coded messages drummed out on their shoe heels and some DIY electronics.

Mark Hosking’s solo exhibitions include Radio Mayday at IBID Projects, London (2003), L’Elac, Geneva and Jerwood Gallery, London (2001). He has been

included in group shows at Arnolfini, Bristol, Institute of Contemporary Arts, London and Kunstverein Bregenz (all 2001) as well as the Lisson Gallery shows Ideal Standard Summertime (1995) and A Shot in the Head (2000).