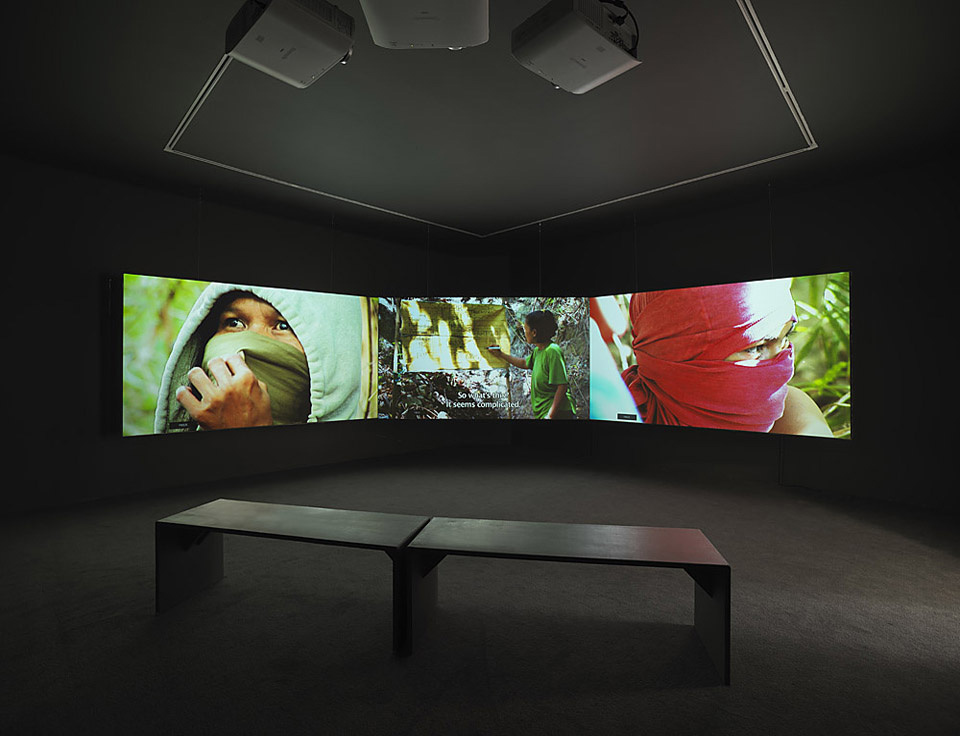 ‘The characters in my films wrest their agency from the structures that would control them, including language, reason, gender, God, capital, and the state. Their action is also performance: they rebel against the small roles society has cast for them, they reimagine who they are, then they perform their greater selves. Thus my work oscillates between fiction and non-fiction, or between mythology and history’. Mark Boulos

Lisson Gallery is pleased to present the UK premier of US artist Mark Boulos’ film, No Permanent Address (2010), from 30 January – 9 March 2013. The film will show alongside a new installation intrinsically linked to this earlier work.

For No Permanent Address, Boulos spent eight weeks living in the Philippine jungle with two guerilla squads of the New People’s Army (NPA), a Communist insurgency which is currently designated as a terrorist organisation by the EU and USA. The resulting work ruminates on the persistence of Communism beyond its supposed death, focussing on the powerful personal narratives of the soldiers. In conjunction with the film, the artist will present a series of large-scale photographs dating from his time in the jungle.

The film’s title intentionally mirrors the initials of its subject whilst referencing the necessarily peripatetic existences of the NPA, who abandon any fixed address and notions of home in order to avoid capture and death at the hands of the Philippine army. Members follow the theories of Marxism-Leninism-Maoism and willingly relinquish their personal desires and property, devoting themselves entirely to the Party and embracing an ascetic lifestyle.

Rather than depicting military skirmishes with the Philippine army, Boulos gives us a more subtle, distinctly human portrait of the NPA, interspersing shots of the army trekking through densely vegetated coconut groves and undergoing weapons training, with emotionally evocative stories of love, family and sacrifice from individual members of the army. One soldier describes being forced to watch the murder of his family, giving rise to his joining of the NPA. Another discusses the importance of holding your allegiance to the party above personal relationships and ensuring that, ideally, any relationships formed outside of the party bring more civilians into the revolutionary fold.

The triptych-like presentation of No Permanent Address takes it from the realm of documentary into an immersive aesthetic experience. The three screens often show the same shot slightly desynchronised, highlighting the fact that no single reality is total but is instead fragmented and unclear; we can never really experience something in its completeness.

The last scene of No Permanent Address ends on a deeply unsettling note, with defensive preparations underway for an anticipated attack by the military, a reminder of the constant danger that members live in. Although they evaded that attack, this summer Boulos received news from the Philippine Communist Party that most of the people featured in his film had been killed. This discovery forms the basis for a new work in the basement of 29 Bell Street that serves as a memorial to the NPA members he lived and collaborated with.

The installation comprises an LCD monitor showing unused footage from Boulos’ earlier work, taken on his very last day with the NPA as the sun sets. As darkness falls, members dissolve into grainy blackness, a haunting reminder that whilst they lived their lives striving for invisibility as if already ghosts, now they are hidden for ever. This video is the last known image of these people before their death. It is juxtaposed with a wall projection showing jungle trees bathed in golden light from behind, redolent of the idealism of the NPA’s beliefs, and a monitor displaying the death notice from the Communist Party received by Boulos. 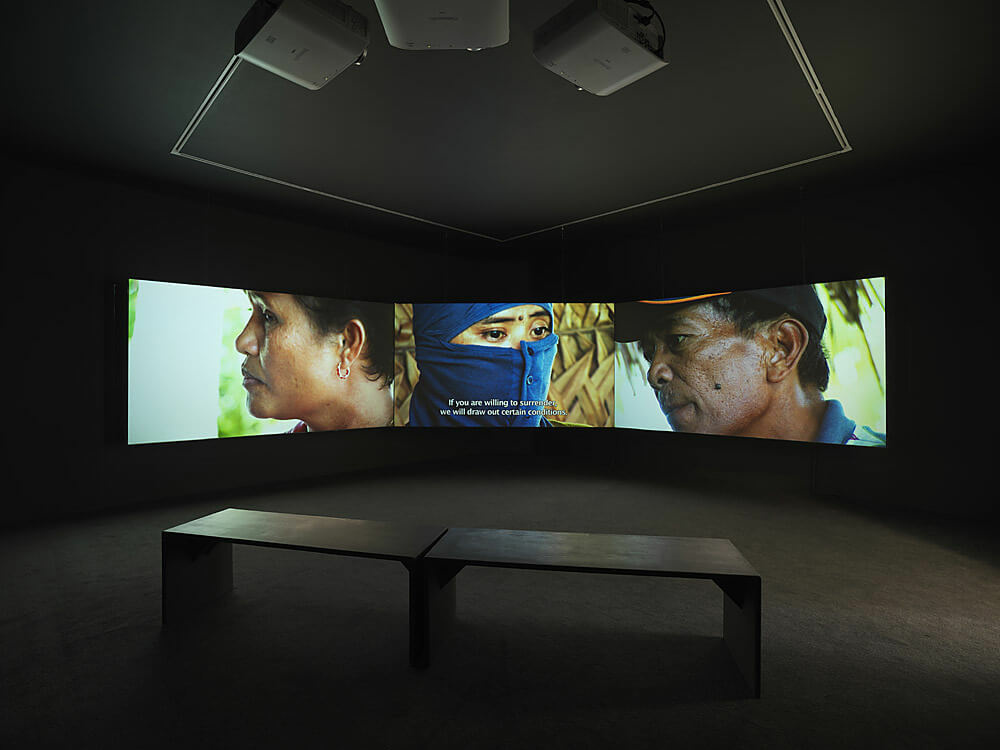 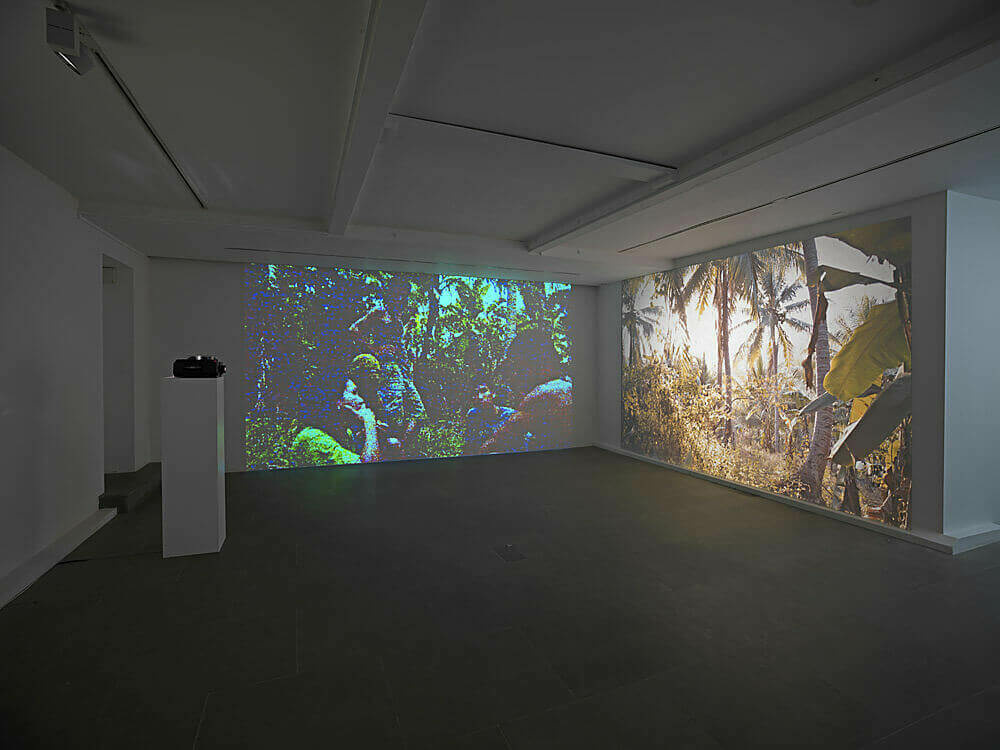 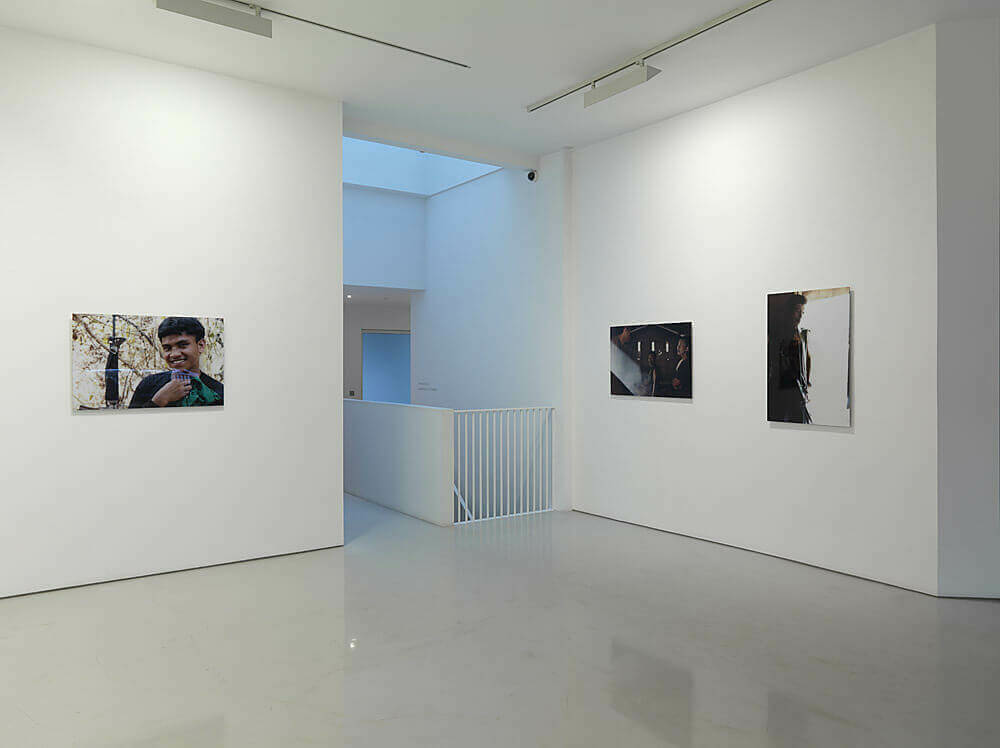 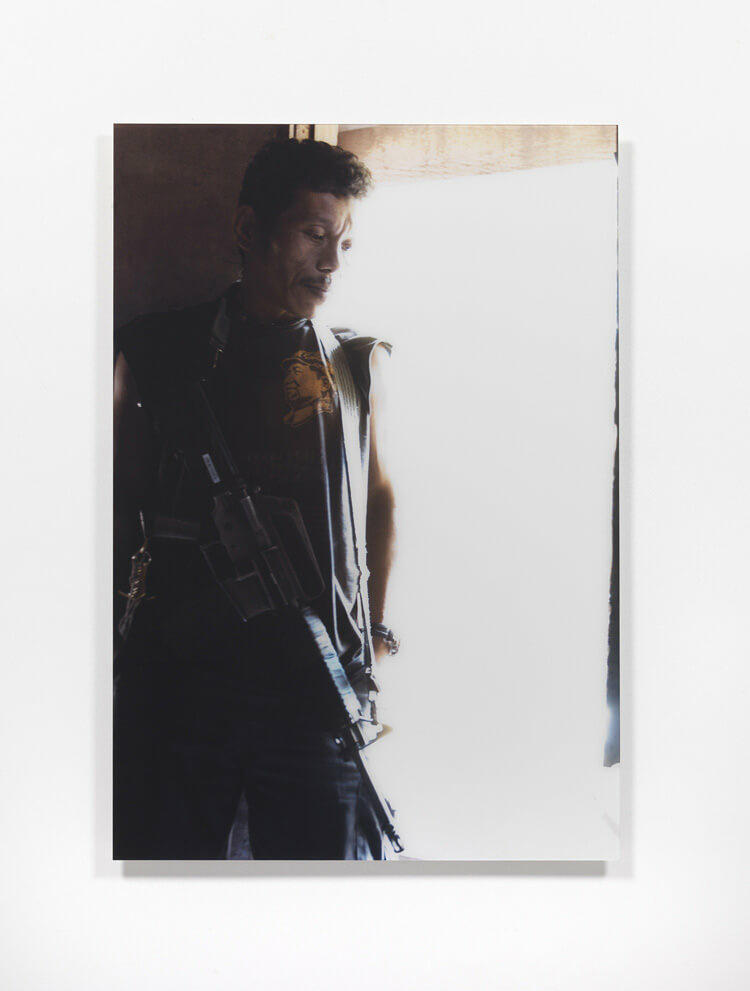 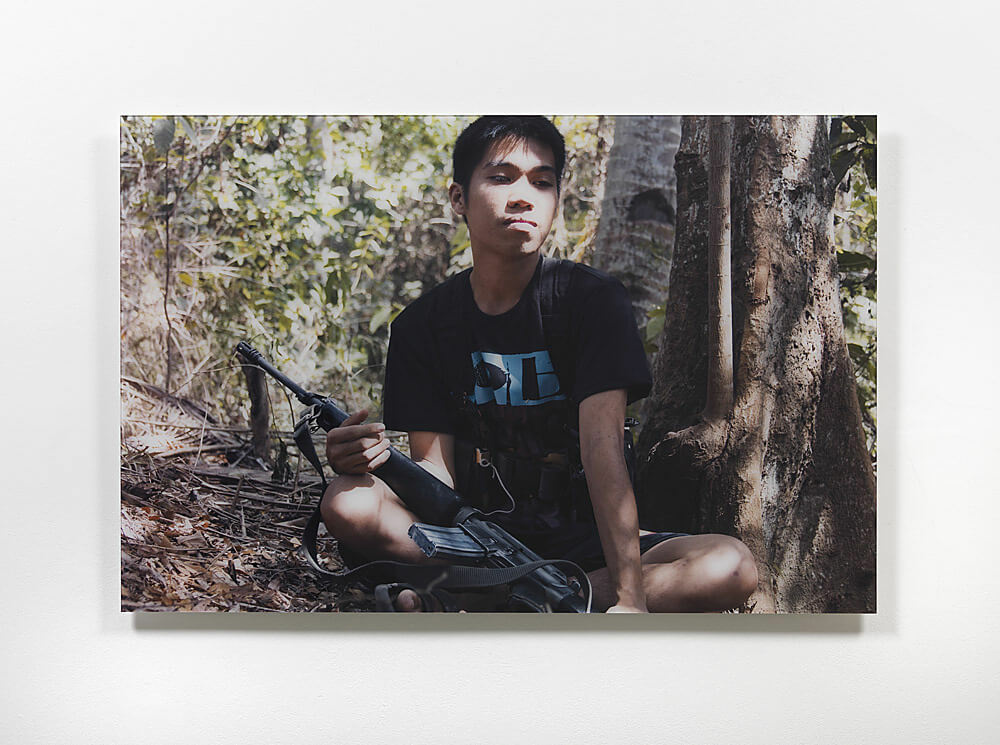 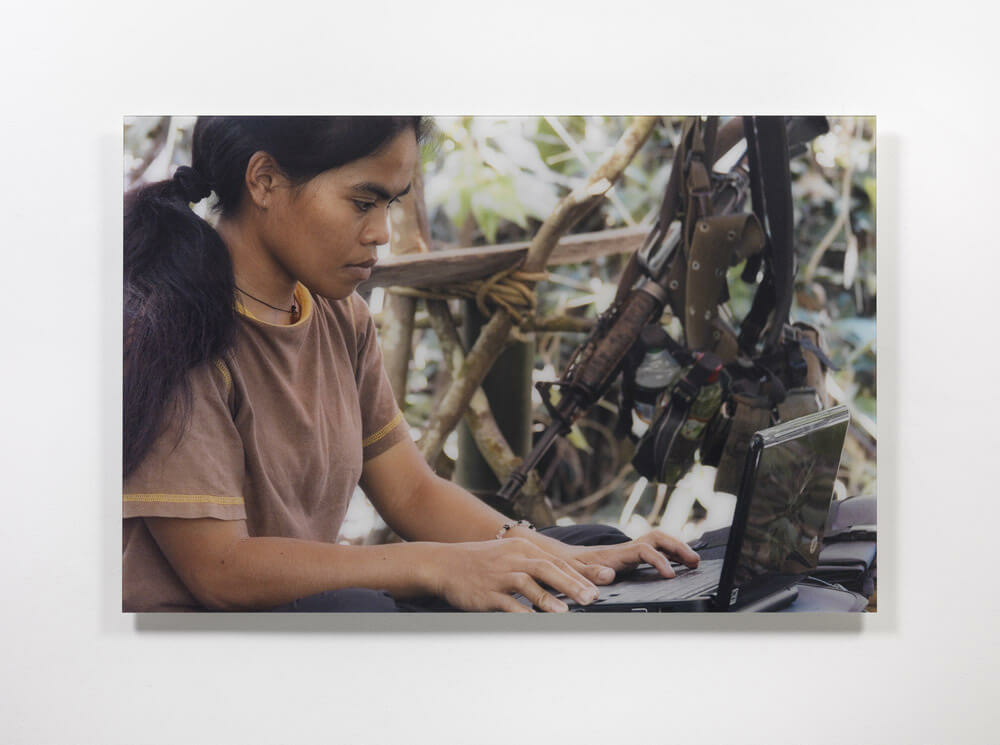 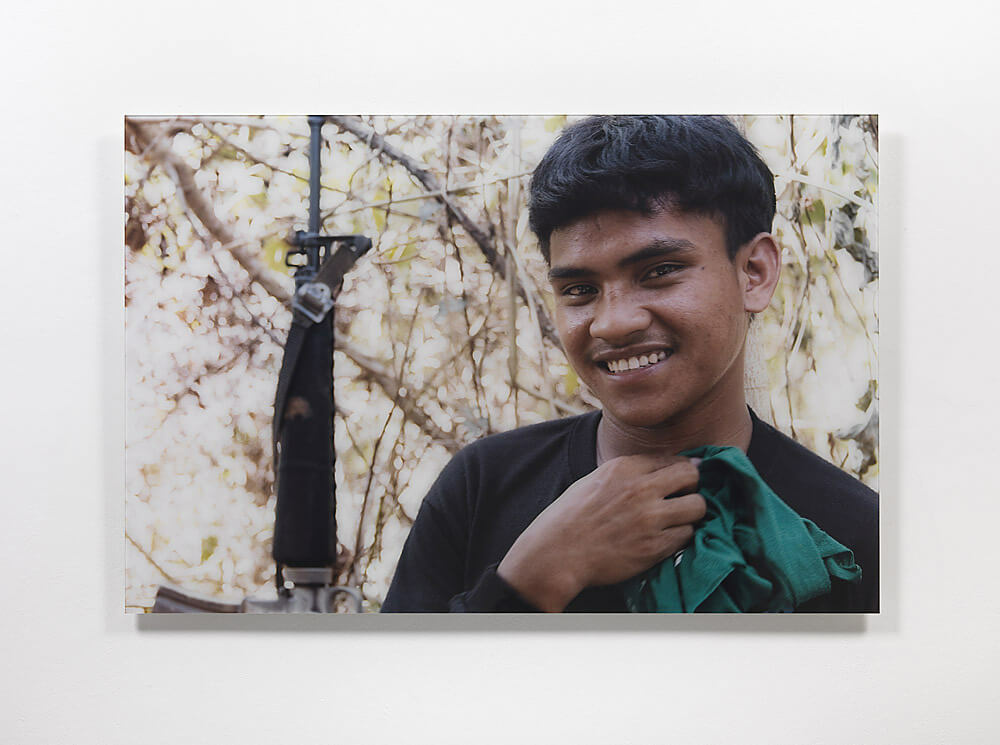 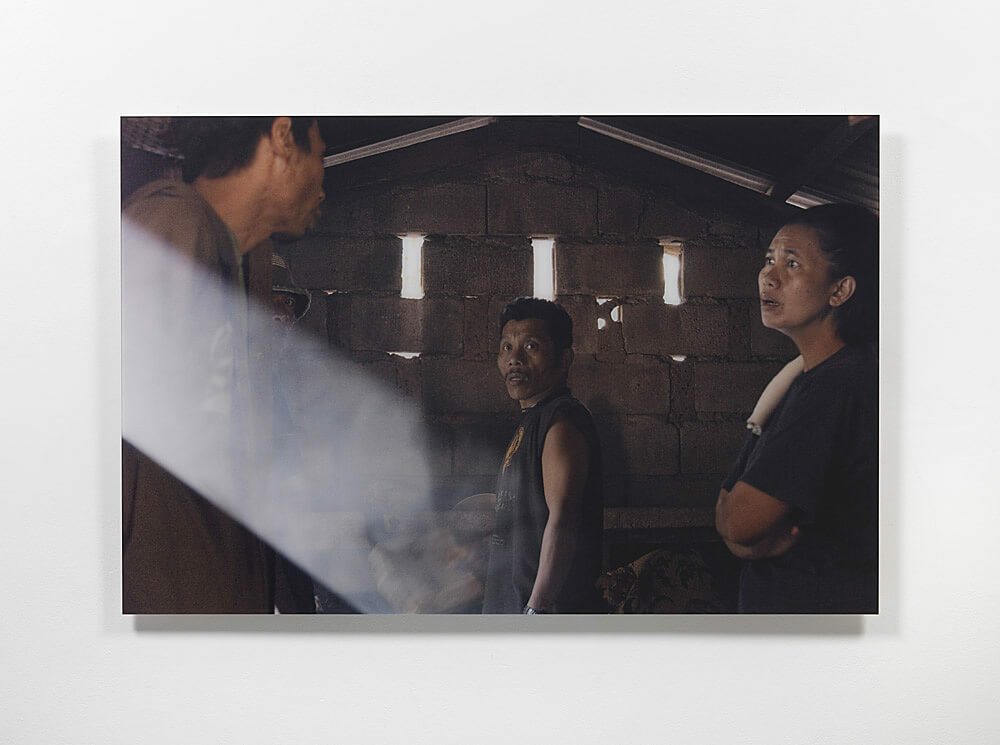 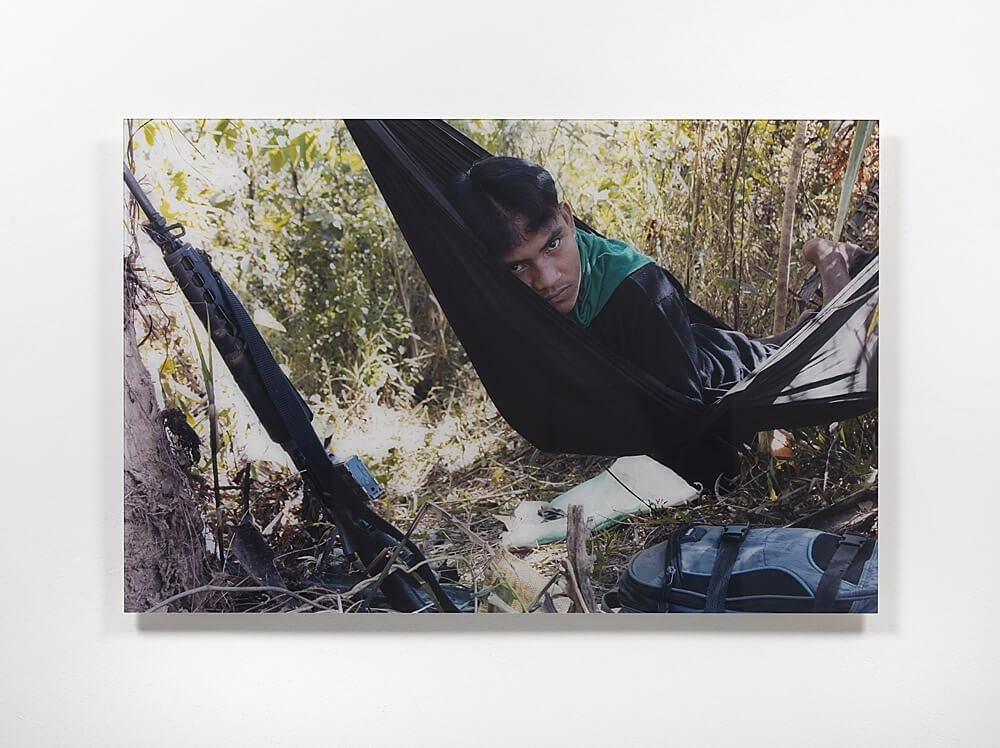