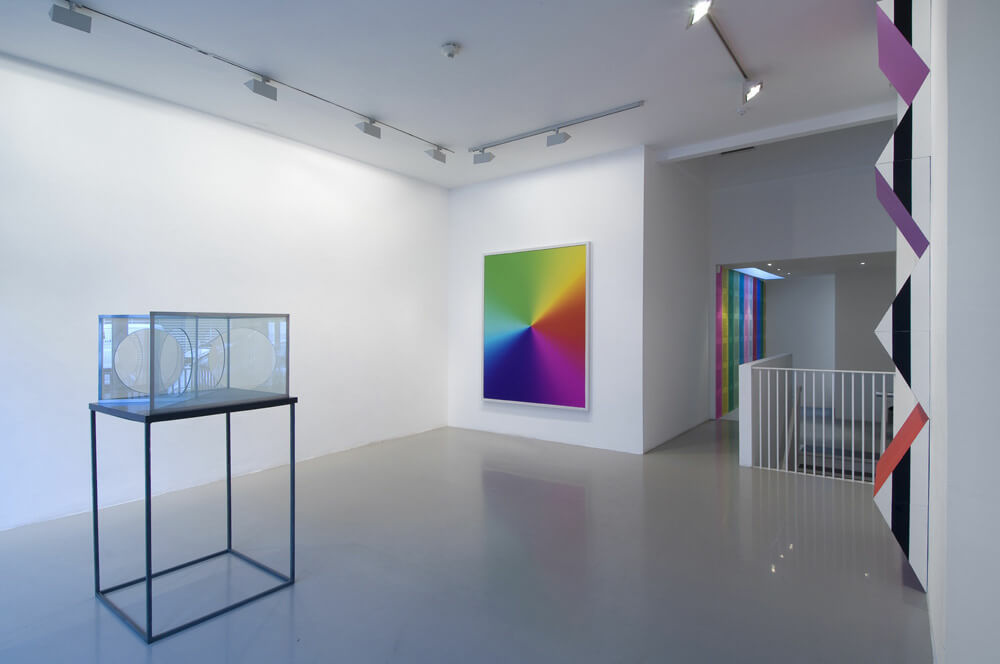 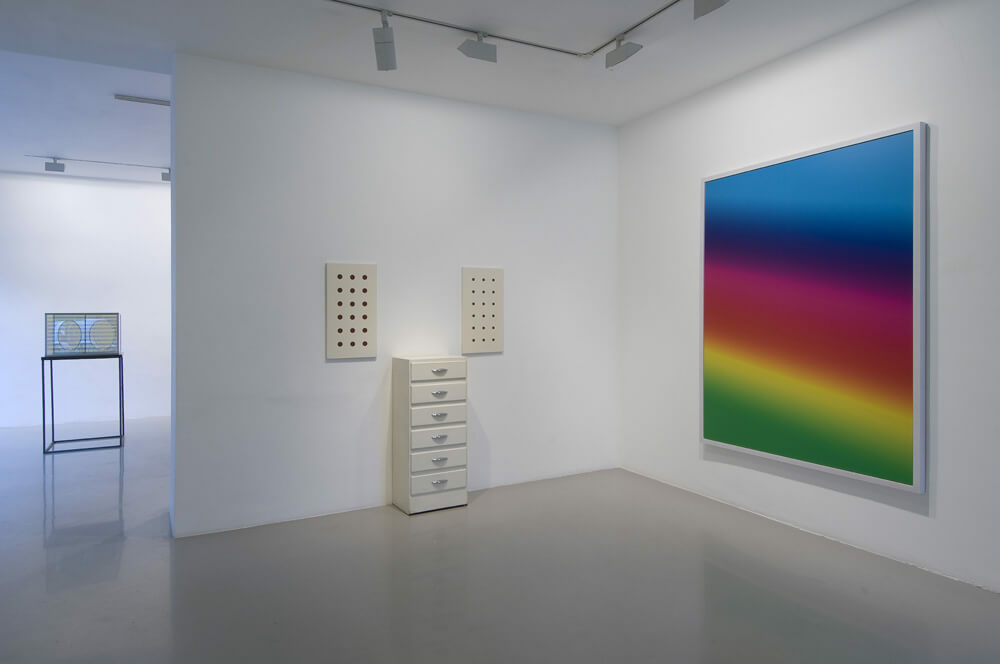 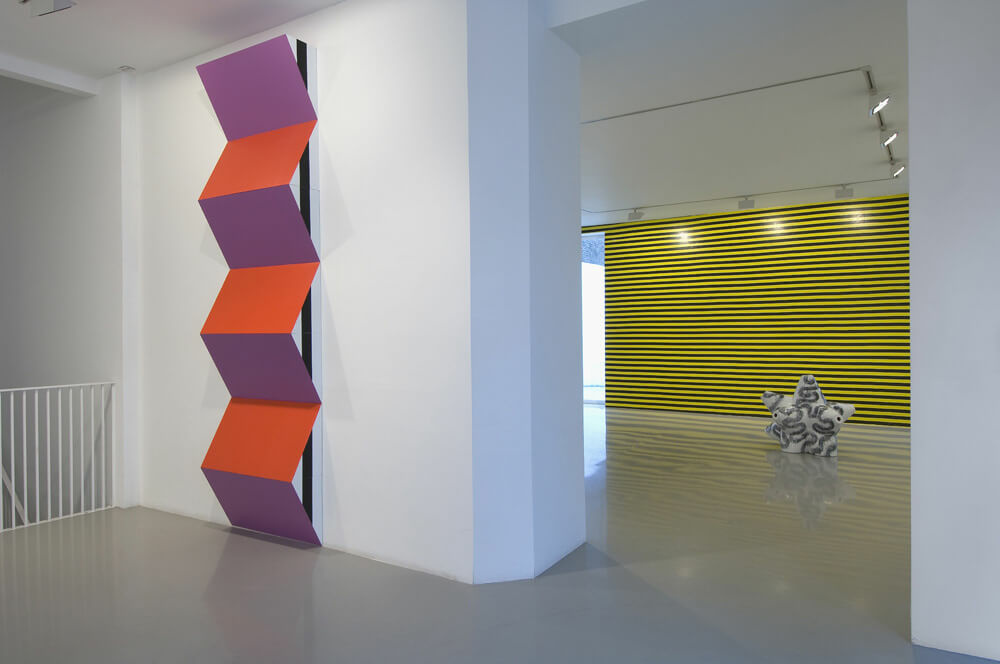 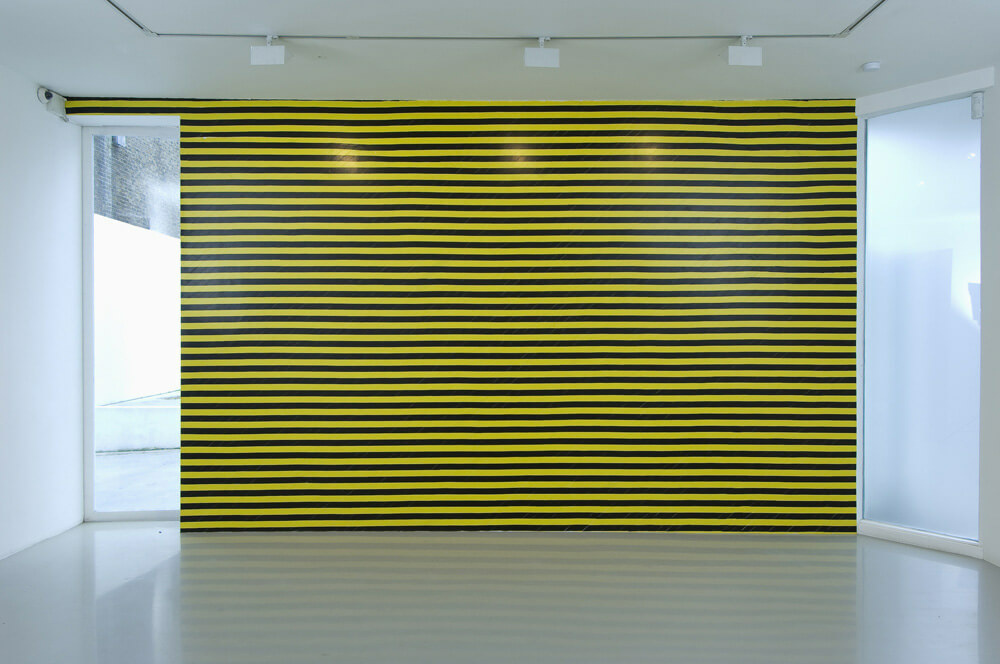 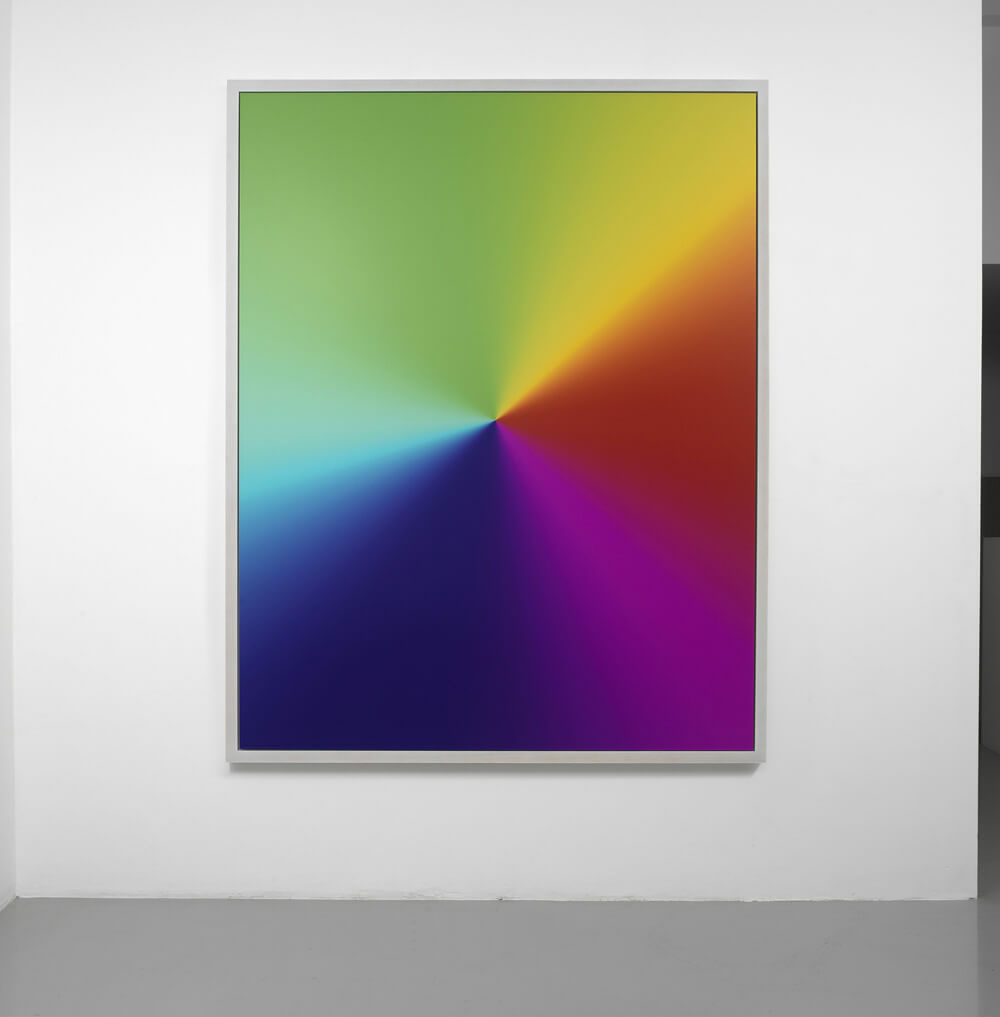 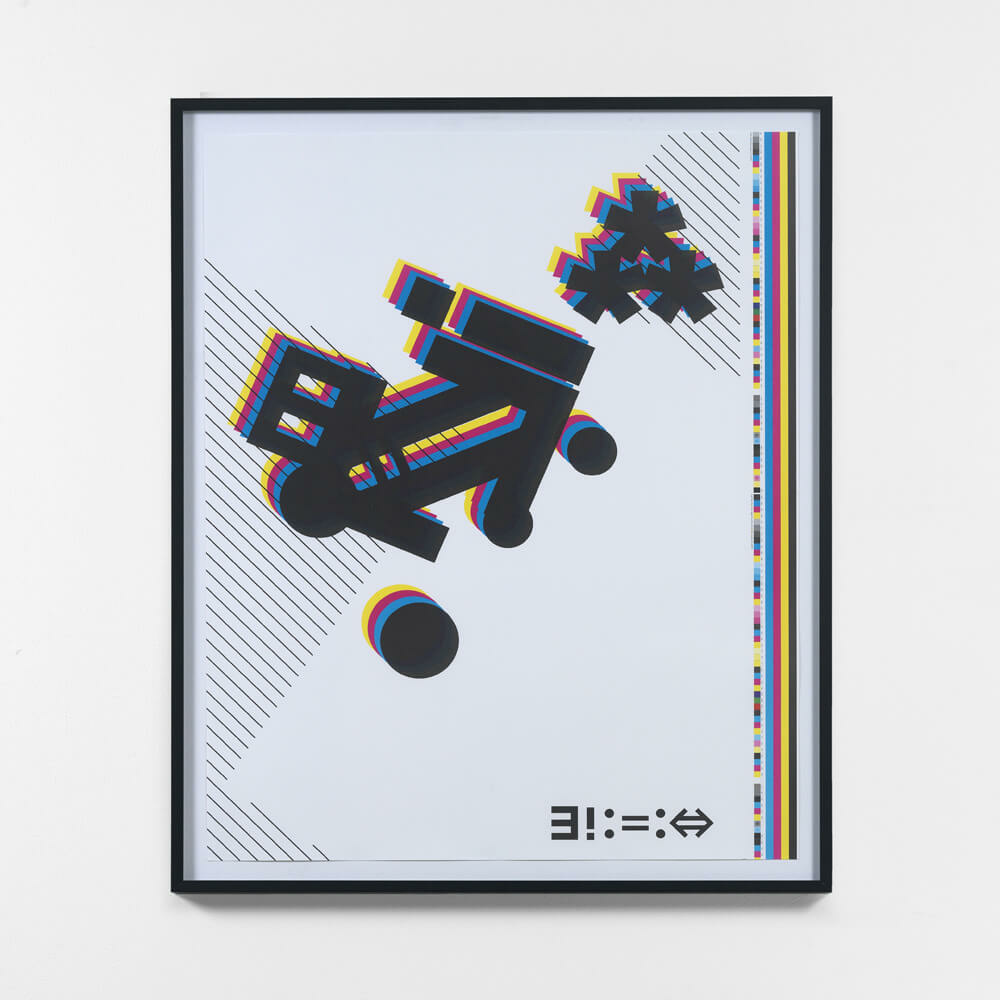 Didactease Expanded (Question to the printer: 'Is it truly offset?') 2006 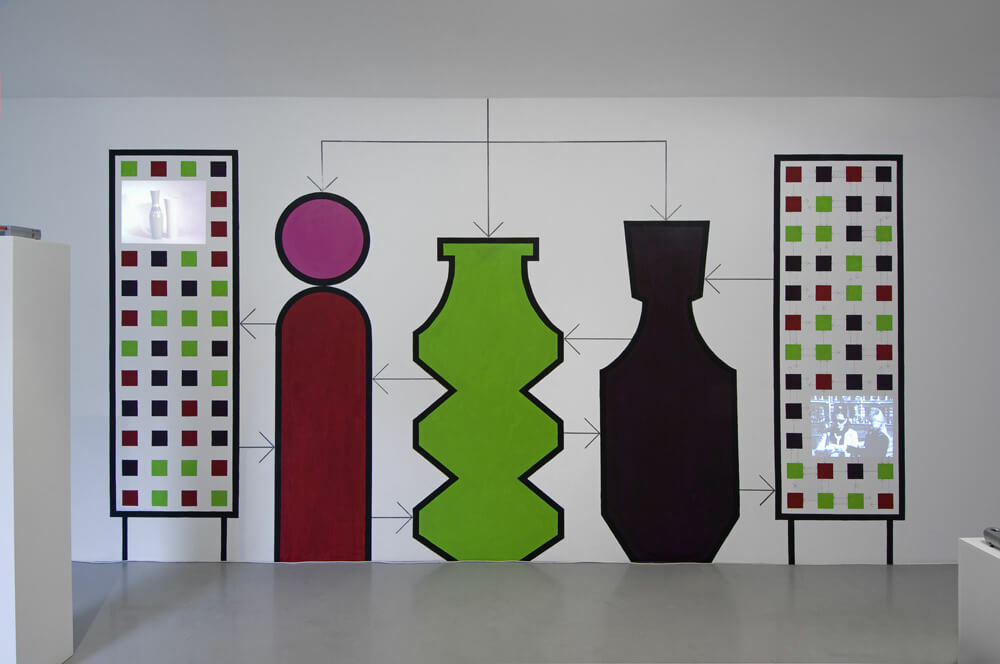 gouache and pencil on paper

Cory Arcangel's practice creatively explores the use - and misuse - of technological models. His experiments often incorporate elements of humour and art historical rhetoric to form a distinctive interpretive language, drawing from sources as diverse as Photoshop tools, computer games and music videos. Operating between high culture, popular culture and subcultures, Arcangel's intuitive thought process combines the technical knowledge of a programmer with the haphazard tinkering of an amateur. Like all good experiments it often leads to unexpected results.

Arcangel 's selection of works for this exhibition has relied on a similar approach. The works are connected by a system of loose associations, reflected in formal and whimsical relations: the choices made are simultaneously well informed and spontaneous, avoiding the obvious path for the one that feels instinctively right.

Stephen Willats has from the 1960s to the present day been a pioneer in researching cybernetics applied to physical and social systems, communications theory and computer technology. He has been especially commissioned to create the installation Cybernetics Still Life: Conceptual Tower n. 41, 2009. The work is a large-scale wall diagram and two video-projections, which investigates the built environment as a site for social exchanges and interaction. This piece is presented alongside Visual Automatic No. 4, 1965. A motor-operated optical machine triggers the human brain to create meaningful order from random external visual stimuli, re-examining how reality is perceived and interpreted. Art & Language have similarly developed a body of work, which simultaneously draws from traditional medium of expression such as painting or sculpture while being the manifestation of a parallel system of critical analysis and discussion. Arcangel's film Untitled Translation Exercise (2006), included in the exhibition, takes as its starting point the American high school film Dazed and Confused. Arcangel plays with the social and cultural connotations in the original film by using an Indian outsource firm to create a dubbed version. The dialogues throughout the film remain in the original language but the actors' Indian accents play against the cultural references of the Texan disaffected youths.

Other works in the exhibition delve in unconventional explorations of specialist disciplines. In The Gifted Amateur, 2007 Rodney Graham proposes the idea of a self-taught artist somehow stumbling across a personal abstract style in painting. Arcangel's series of works Photoshop Gradient Demonstrations, 2008- ongoing, are titled after the direct instructions for how to create an image using the Photoshop gradient tool. By setting a parameter, an originating point in the colour gamut, an image is automatically generated and here translated from the screen into a material surface. John Armleder uses chance as a method in the creation of his works and the determination of a final outcome. His Furniture Sculptures installations, of which Untitled, 1986 is part, juxtapose furniture with monochrome or abstract paintings in a scenographic presentation.

This intuitive and spontaneous process is countered by works which are generated by the application of a systematic methodology. Each of Jenny Holzer's Inflammatory Essays, 1979-82 is composed of 100 words distributed across 20 lines, which provide a rigid grid to provocative content. Daniel Buren's site-specific interventions Zigzag for Two Colours were originally conceived for his Lisson Gallery solo exhibition in 2007. Buren's reductive approach through the use of signature stripes of fixed width with alternating bands of white and colour as the foundation of his work enabled him to explore the essential elements of painting and sculpture in relation to the ideological context, which produces their meaning.

Lastly, a playful subversion accompanies Arcangel's choices for the exhibition. Personal Film (2008), takes the connotations of avant-garde structural film and turns them inside out. The work plays with our reading of art history and the conventions of film presentation within an art context, as a projection on a looping system. The experimental factor is in fact achieved by assembling "damaged" film stock that was bought online from a stock film and photo warehouse and the film itself has no content beyond its material aesthetic. Ceal Floyer's work resonates with this approach. Her work Wall, 2002 is a humorous play with the marking for hazard warning. An entire wall is covered by layers of yellow and black warning tape applied diagonally to perceptually create straight lines of alternate colours, thus substituting its connotative association with danger with the decorative quality of its surface.

Cory Arcangel (b. 1978) lives and works in Brooklyn. His work has shown at the Whitney Museum of American Art, the Museum of Modern Art, and the Guggenheim all in New York. In 2005 he was the subject of a mongraphic exhibition at Zurich's Migros Museum. Upcoming solo exhibitions include the University of Michigan Museum of Art, Ann Arbor, MI (forthcoming January) and the Museum of Contemporary Art, Miami, FL (forthcoming Spring).