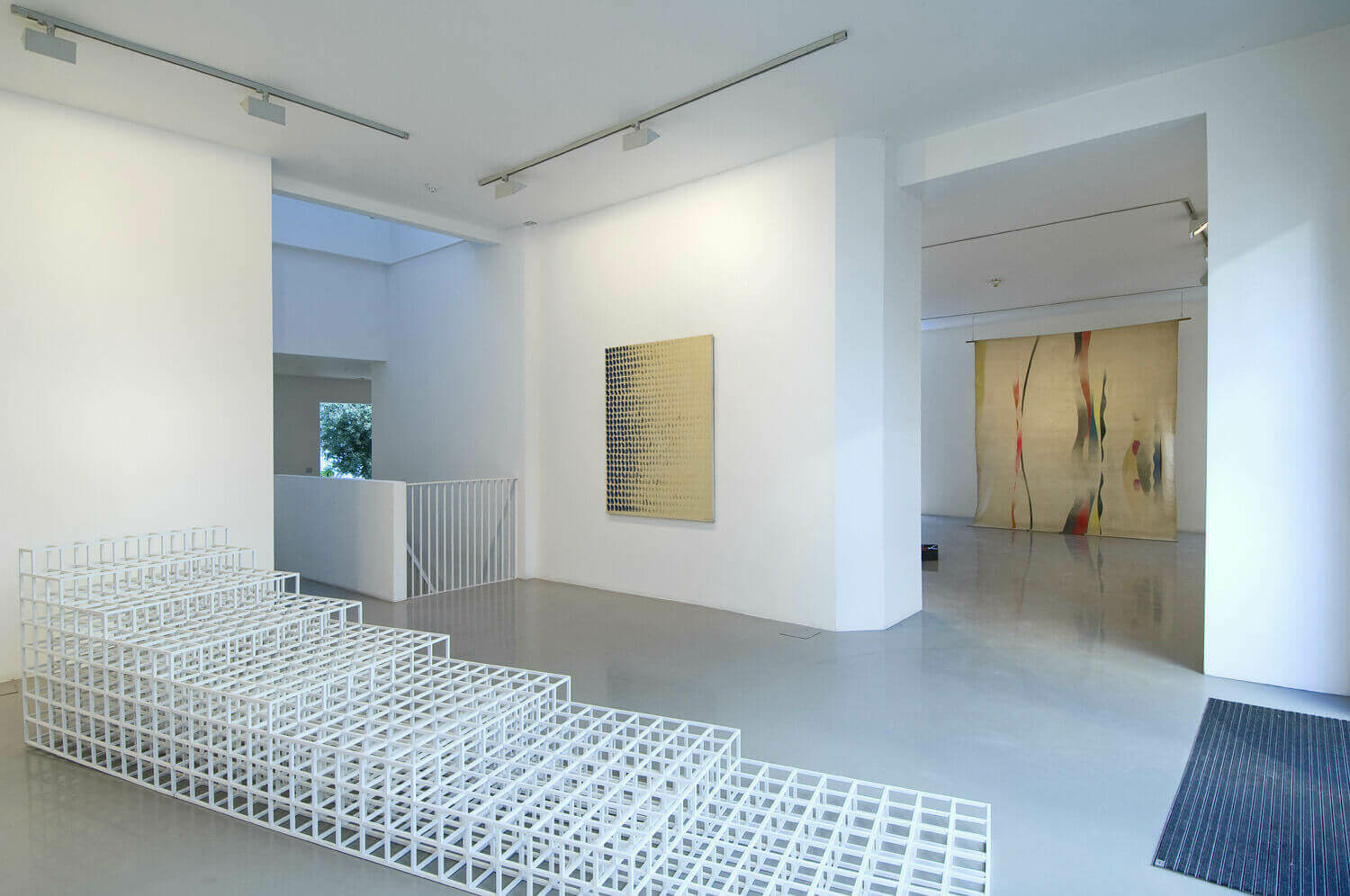 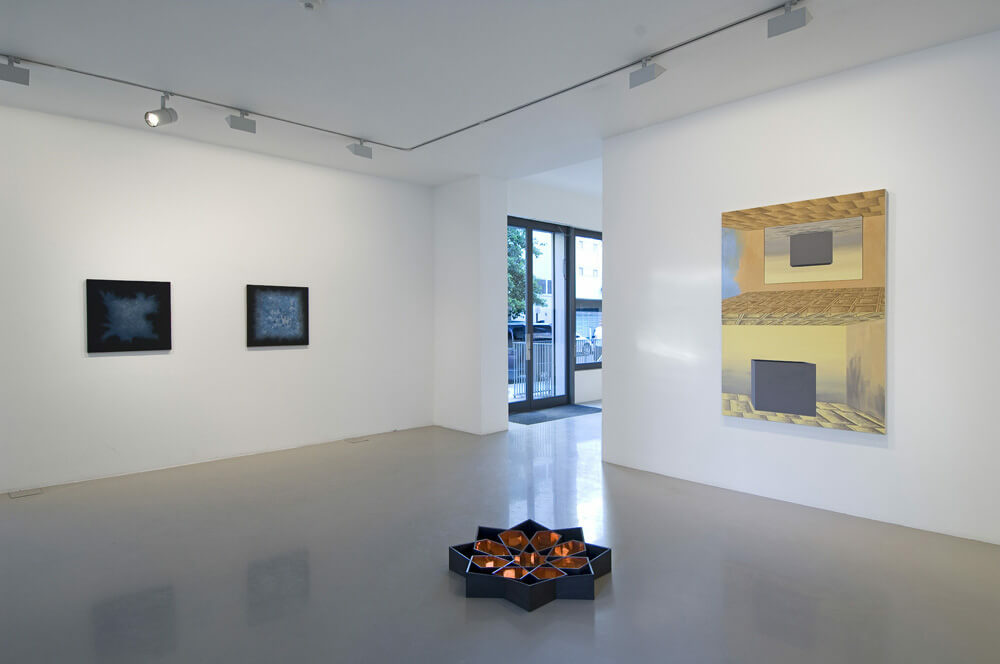 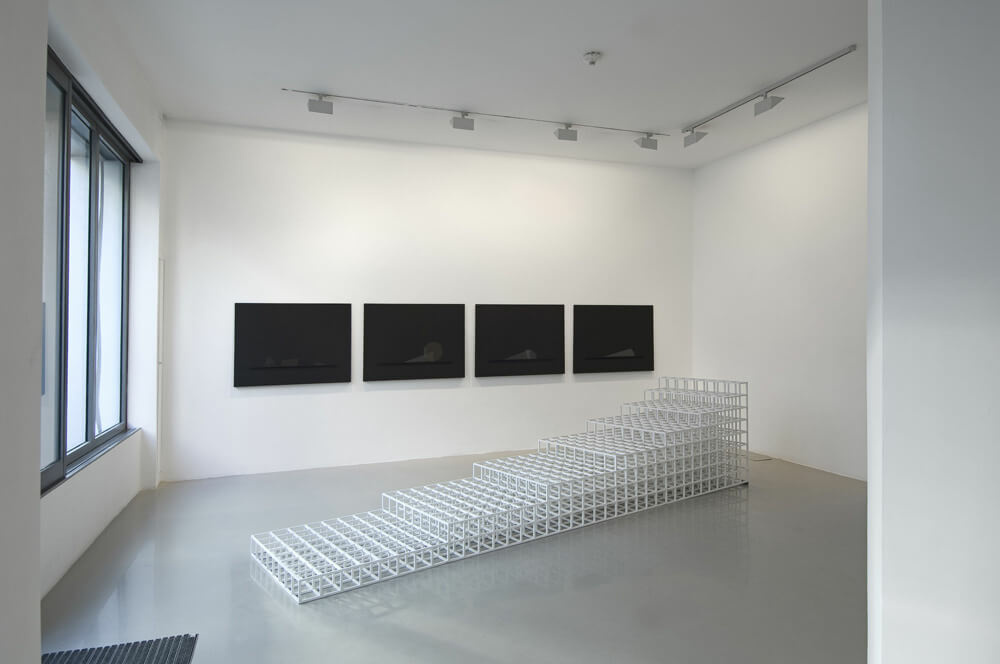 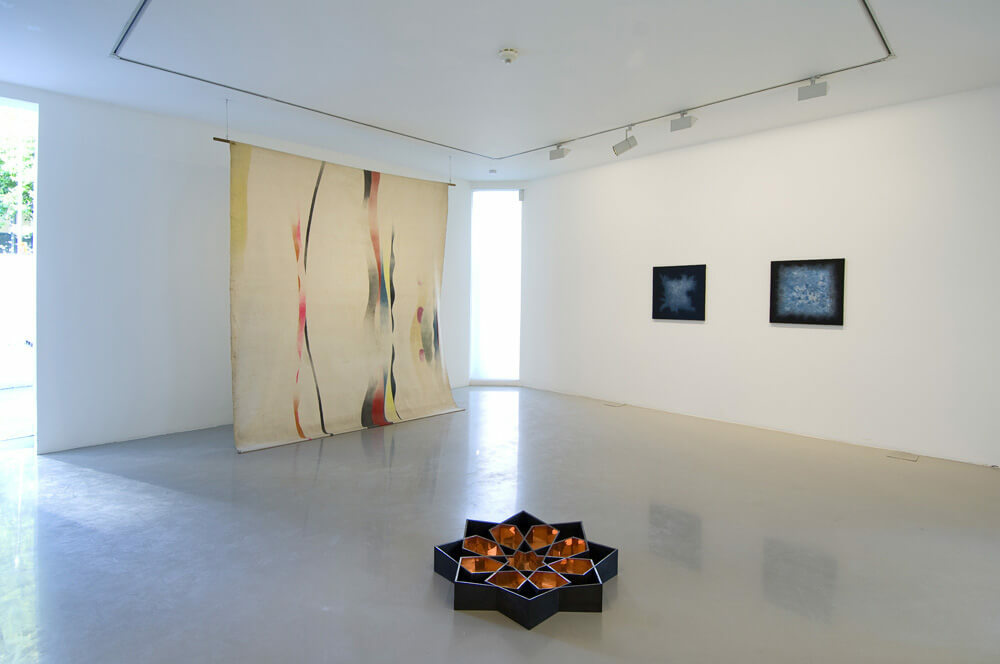 'Conceptual artists are mystics rather than rationalists. They leap to conclusions which logic cannot reach.' Sol LeWitt, Sentences on Conceptual Art, 1969

Lisson Presents 5 examines abstraction as a system of representation. Central to the display is Melvin Moti's 35mm film The Prisoner's Cinema (2008) and a new series of assemblages by Florian Pumhösl, which will be presented together with works by Art & Language, Spencer Finch, Ceal Floyer, Shirazeh Houshiary, John Latham, Lee Ufan and Sol LeWitt.

The exhibition explores the abstract dimension of art, as a historical notion based on a process of self-definition and self-reference. The artists selected use abstraction in different ways, investigating the mind as constructor of forms, which in turn generate variations and possibilities for complex systems of representation. Some of the works in the exhibition explore the possibility of defining an 'occult' primeval and universal visual vocabulary, while others seek and record patterns – formal or gestural – in natural or cultural manifestations. Abstraction can also be seen as a strategy to turn the rejection of a figurative dimension and a position of passivity into a creative one, through the automatic creation of images.

The Prisoner's Cinema is a phenomenon recorded in conditions of prolonged psychosensorial deprivation, the brain responding by generating its own visual hallucinations, which take the form of geometric light shapes. The existence of universal 'form constants', recurring independently of a subject's interpretation or background, supports the notion of a formalism of the occult. This can be interpreted as a system of sensorial perception that pre-exists culture and language and takes place in the mind emptied by all thoughts, at 'point blank'. The 'form constants' can therefore be considered as a form of abstraction, removed from all specificity. Melvin Moti's film explores the displacement occurring in the self-perception of consciousness, where the subject is a spectator and a witness of his own sensations and thoughts. The film follows separate durational structures, where an underlying tension is articulated between the visible and the spoken, as the visual imagery is manifested with a degree of restraint and language offers an inadequate attempt to translate it into words.

Under the title Moving Stage, Florian Pumhösl's series of assemblages are composed of groups of four slightly inclined rectangular panels, covered in black cloth, on which shapes cut out of glass pane are arranged as part of a systematic geometric pattern. The patterns follow specific formal themes and are evocative of progressions, ramps or templates for dresses. They refer to concepts of the modern stage as a suggestion of space through the use of a simple geometric vocabulary. The works follow the principles of modern collage, where each element can be identified as a fragment of a pre-existing order, following a temporal sequence rather than a spatial construction.

Melvin Moti was born in 1977 and lives and works in Rotterdam. Since completing his studies at the Academy in Tilburg and his post-graduate residency at De Ateliers, Amsterdam, he has exhibited widely in Europe, at the Frac Champagne in Reims, the Stedelijk Museum in Amsterdam, the Kunstverein Köln, MMK Zollamt and at the 5th Berlin Biennale.

Florian Pumhösl, was born in 1971 and lives and works in Vienna. Solo exhibitions of his work include Mudam, Luxembourg, Neue Kunsthalle St Gallen, Zurich Kölnischer Kunstverein in Cologne and Secession, Vienna. The artist has participated in Documenta 12, the 27. Sao Paolo Biennale and dreams and conflicts: The Dictatorship of the Viewer, Venice Biennale. Upcoming projects include the group exhibition Modernologies at Macba, Barcelona in September 2009 and will have a solo exhibition at Mumok in Vienna in 2011.

Lisson Presents is a series of exhibitions devised for the 2009 programme at 29 Bell Street. Exhibitions include a focused presentation of an artist not currently represented by the gallery, a new body of work by a Lisson artist and a selection of works by Lisson Gallery artists from 1967 to now. Since its foundation, Lisson Gallery's reputation has had two defining characteristics: its support for art with a conceptual foundation, and its championing of successive generations of British and international artists. Lisson Presents has been exploring different aspects of this dual ethos, constrained neither by fashion or history instead drawing on the dynamic interplay between tradition and invention.