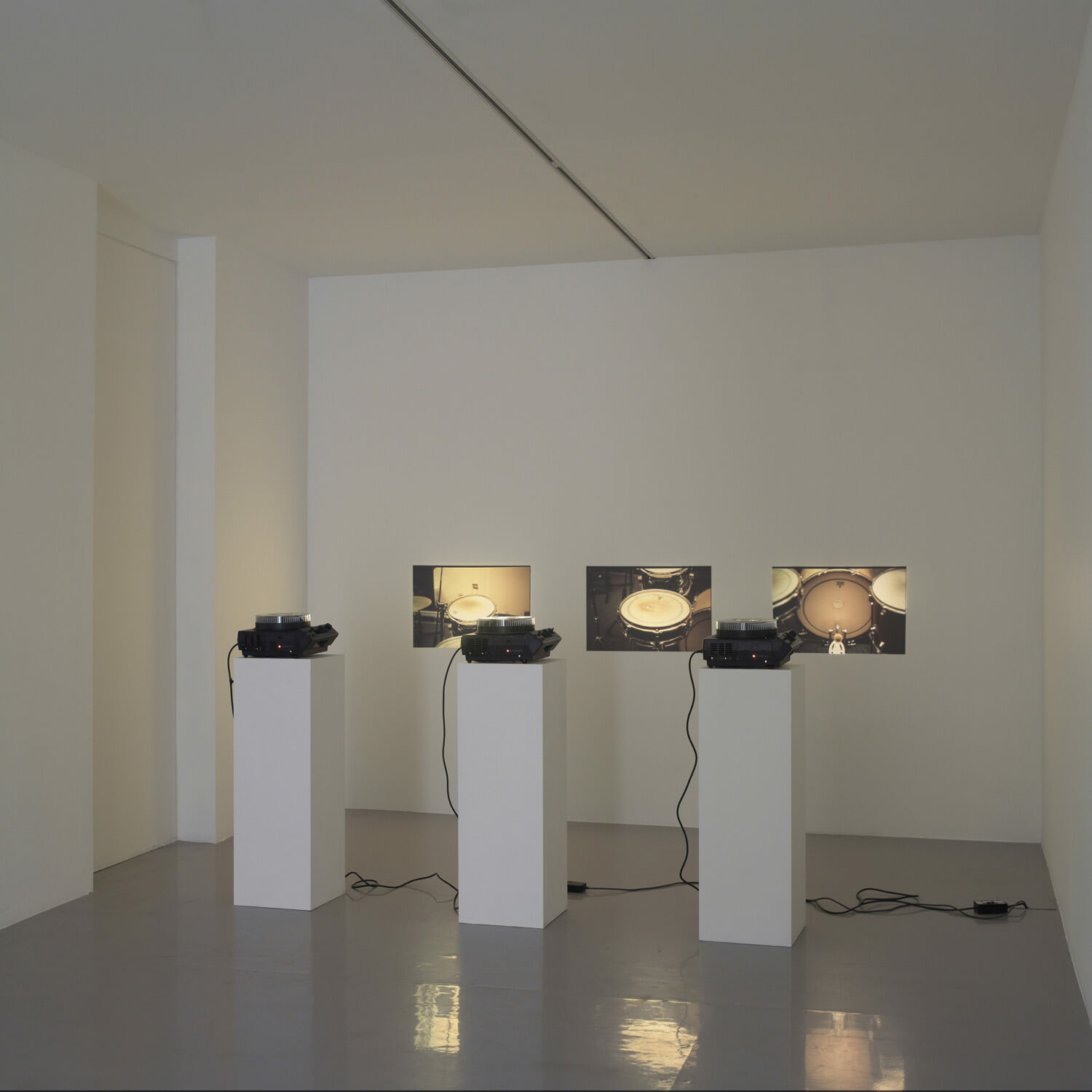 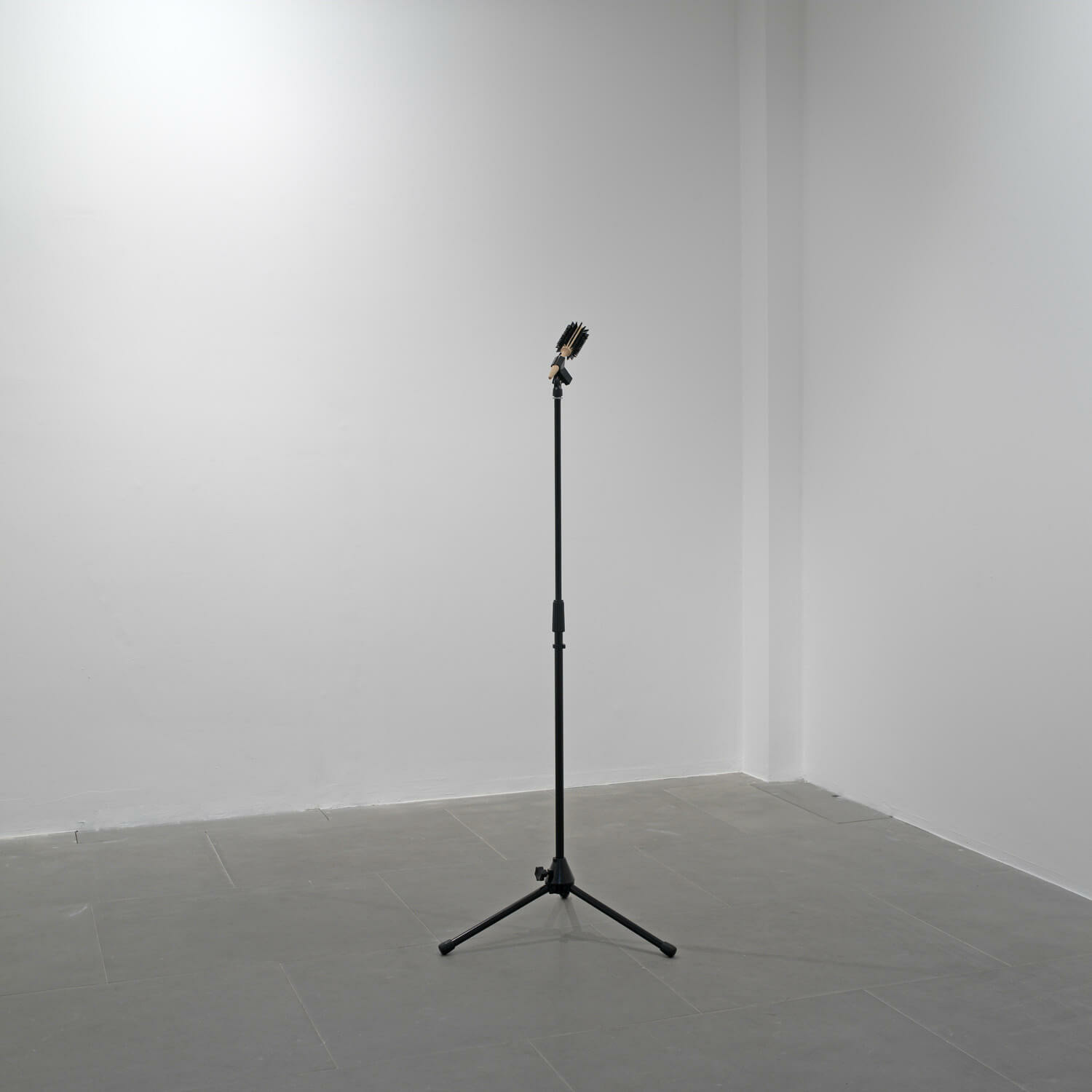 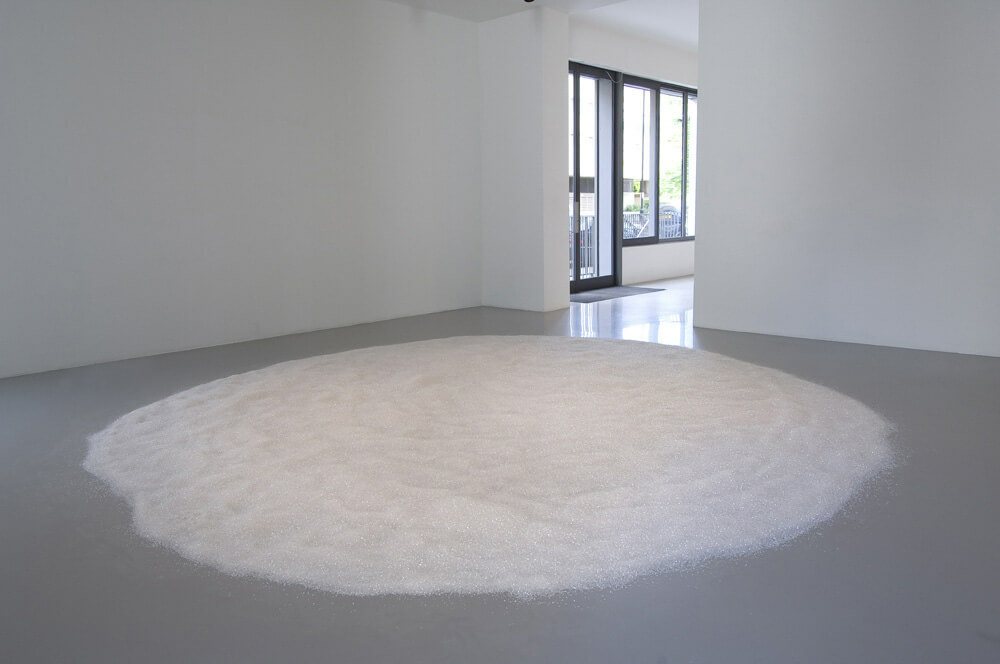 
The forth episode of ‘Lisson Presents’ brings together a group of artists whose inspiring work creates new exciting synergies between the traditions of sculpture and performance. Guest artist is Wilfredo Prieto, while Allora & Calzadilla are presenting a new film alongside recent and new works by Ceal Floyer, Ryan Gander, Fernando Ortega and Santiago Sierra.

The exhibition presents physical artworks realised in an overt liaison with performance. Each work involves objects that relate or refer to particular uses in everyday life, yet levitates the ordinary through the injection of provocative, charming and metaphorically charged approaches. These objects, in their physical presence or as central ‘characters’ in video and photographic documentations or films, imply or explicitly solicit possible uses, gestures or physical engagement. The promising relationship between sculpture and performance is explored by all artists with a playful and often ironic critical stance that subverts the common uses, references or shapes of the objects brought into play or referred to.

Wilfredo Prieto presents One, 2008, a desert island of sorts, made of crystal diamonds among which lies one real diamond. As in many of his works, the piece is characterised by formal modesty and the title is integral to the work, revealing its conceptual premises while inviting one to further explore and question its formal and physical qualities. One amplifies potential meaning relying on a great economy of means. The work induces a nuanced and nearly perverse pleasure in eliciting a possibility that is as concrete as unreachable – finding ‘the one’ – while addressing issues of accumulation, not just on a metaphorical but also on economical and political levels. An older work, Escala de Valores (Scale of Values), 2001, plays with the materialisation of a common expression of ethical and economical value-judgements into an extremely simple and yet memorable presentation of mundane and valueless objects – a stack of plastic cups containing different liquid in a specific order: rum, beer, wine, soda and water.

Allora & Calzadilla’s new film How To Appear Invisible, 2009, combines a documentary tone with cinematic format and pictorial aesthetic. In 2008, bulldozers demolished the last remains of Berlin Palast der Republic, a landmark of the German Democratic Republic and site of the Volkskammer (the People's Chamber). On that same location, in 1950, the socialist government had blown up the old Stadtschloss, the royal palace, damaged during the Second World War. In 2007 the Parliament and the region of Berlin decided to commission the reconstruct of the Stadtschloss's exterior in connection with the building of the new cultural centre. This building is a powerful example of the way in which changes in the vision of leading political forces continue to re-shape the identity and history of a site though far- reaching urban interventions and obliterations. The film shows the bulldozers biting ravenously into the building remnants. A German Shepherd dog is shown wearing a ruff with the world-famous Kentucky Fried Chicken trademark. The dog prowls around the desert and non-descriptive setting of the demolition site, in a silent and solitary quest. Yet, its perceptions are highly limited, its range of vision reduced and hearing compromised.

Ceal Floyer’s Solo, 2006, could literally be described as a hairbrush on a microphone stand. The work seems to coincide with something in the real world - but with a twist. Floyer’s work urges a call to verbal language, as the potential verbalisation of the experience of the work often provides a key to its effectiveness. The familiarity of the objects it relies upon provides a sort of vernacular vessel for conceptual activity. In the case of Solo as well as with Order, 2007, it is the object that generates or demands for an activity, and not the other way

around. Solo solicits sensations of vulnerability and uncertainty but also desire and aspiration moving from the domestic to the public sphere. Order, with its alphabetically ordered index cards neatly arranged on a matting, evoques a compelling (if rarely acknowledged) desire and, at the same time, is informed by Floyer's particular sense of humour and an awareness of the absurd. In both cases, Floyer uses everyday or readymade objects, exploring the dialectical tension between the literal and the mundane, and between the sculptural and the performative.

Ryan Gander’s Captatio Benevolentiae - (Alchemy Box No. 14), 2008, uses as a capsule of its particular collection a sealed Kodak videotape, a kind that art lovers may recognise from David Lamelas’ The Violent Tapes of 1975. Gander’s Alchemy Boxes are containers for snippets of the many objects, images and ideas that solicit his inextinguishable curiosity in the world. The most diverse items are found, collected, bought and borrowed, entering a journey that may end up re-processing and re-presenting them, but filtered by the artist’s personal narratives, light touch and aesthetic inch. In A blood that runs against that kind of blood, 2006, twenty-four 5cm wooden cubes appear as in disarray on the floor as a game or puzzle. Twelve of the 5cm cubes are screen printed with drawings by three budding novelists showing their impression of Sherlock Holmes’ living room, in addition to three texts from the 1951 Sherlock Holmes Exhibition at Abbey house, London. The second set of twelve 5cm cubes has each side painted with differing pastel tones, the 'intellectual colours' taken from L’Esprit Nouveau pavilion by Le Corbusier. Both works solicit an unstoppable desire to manipulate them, in order to physically explore and actualize them. Yet, the impossibility of doing so preserves intact their potentiality and their curious beauty.

Fernando Ortega’s Panico Escenico, 2004, is an installation consisting of three a-synchronised 35mm slide projectors showing images of percussion instruments. The potential and awaited experience of the sound of the instruments being played is substituted by the nearly musical rhythm of the changing slides. This work is emblematic of Ortega's delicate experimentation in the translation of sound into visual registers. Panico Escenico plays with the shared knowledge and experience of common musical instruments while preserving their potential and offering, instead, the sound of their technological reproduction. Sensorial experience and intellectual understanding are in this way bridged, but they never meet, maintaining open different possible associations.

In the tradition of artists such as Art & Language, Sol LeWitt and Dan Graham, Santiago sierra’s work exists in the journey from image to text and back to image, in a constant loop of amplification and reduction of meaning. In Raising of Six Benches, 2001, and 90 cm Bread Cube, 2003, documentation of actions are presented alongside a text written by the artist, briefly describing the conceptual and practical constraints framing the project. The love for clear conceptual inceptions and minimal formal qualities are counterbalanced by the presentation of human basic needs. A bread cube is taken apart to feed a large number of homeless people in Mexico City (90 cm Bread Cube), heavy monolithic benches are elevated manually by workers in a poignantly beautiful performance that highlights situations of human struggle (Raising of Six Benches). Herculean figures from past mythologies become – in the present global economy – immigrant workers in search of the occasional income. The way Santiago turned performance into sculpture has been of inspiration to many fellow artists and continues to question issues of basic human rights, labour, and the poticized body.

On the first Wednesday of every month a new exhibition part of ‘Lisson Presents’ opens to the public at 29 Bell Street. Each includes three complementary elements: work by a guest artist not represented by the gallery; a new body of work by a Lisson artist; and a focused display of works by Lisson Gallery artists from 1967 to now.