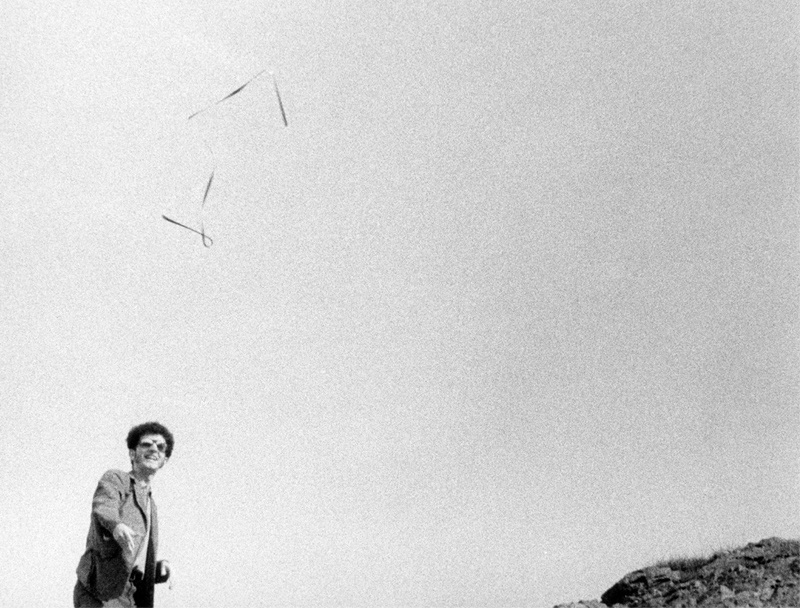 Drawing is both physical entity and intellectual proposition in ‘Line’, Lisson Gallery’s group exhibition, guest-curated by Drawing Room. Fifteen international artists – whose works span seminal artworks from the late ’60s through to performative and site-specific pieces made especially for this exhibition – take their various lines for a walk off the page to intermingle in the three-dimensional space of the gallery, extending via sound into the atmosphere and reverberating via action and memory across time.

Lisson Gallery’s almost fifty-year history frames the exhibition. Sol LeWitt’s Wall Drawing ♯157, a diagonal line first drawn according to the artist’s instructions by Nicholas Logsdail in 1973 and re-drawn again for this exhibition, suggests an expanded field for contemporary art through its conceptual premise. Richard Long’s 1980 work A Four Day Walk describes an imaginary line in the ground measuring 94 miles, which shifts the parameters of drawing to consider man’s physical yet transitory relationship with the world. Long’s ephemeral line contrasts poignantly with British artist K. Yoland’s recent photography series, Border Land Other (2013-2014), the result of a residency in Texas, shown alongside a film of her performance of the same name. The performer unfurls an unruly paper line, which refuses to settle in one spot, referencing the complexity of carving up land on a map and the arbitrariness of borders. Here the line describes not one person’s passage but instead a political boundary not to be crossed, namely the border between Texas and Mexico. A recent work by Julian Opie also brings the natural world into the gallery via a black vinyl installation, Pine Forest. The vertical procession of tree trunks can also be read as a parade of silhouetted figures, a stream of barcode data or simply as abstract lines.

Brooklyn-based Maximilian Schubert and London-based Greek artist Athanasios Argianas both present new and recent work that employs metallic forms to execute three-dimensional drawings. Schubert’s linear compositions cling to the gallery walls like the frames of invisible paintings, while Argianas’s installation features a freestanding steel armature draped with brass ribbons. Etched with words that describe subjective measurements, such as “the length of the strand of your hair”, the ribbons’ descriptions will be activated via spoken performances during the exhibition’s opening, operating like a linear code that translates material into sound.

In Viennese artist Florian Pumhösl’s animated film Tract (2011), moving lines explore the relationship between dance notations and a figure’s movement in space. Drawing from Paul Klee’s Pedagogical Sketchbook, which states “a line is a point, which goes for a walk”, Berlin-based artist Ceal Floyer’s 2008 work, Taking a Line for a Walk, uses a marking tool to paint a meandering line on the gallery’s floor, its length dictated by the quantity of paint. The performative element of drawing is also referred to in German artist Jorinde Voigt’s Botanic Code (2015), which translates the artist’s perceptions by way of an algorithmic code into a row of painted aluminium rods leant against a wall.

American conceptual artist Tom Marioni’s One Second Sculpture (1969) documents the artist throwing a coiled tape measure into the air and letting it fall – an act echoed in Jonathan Monk’s neon Fallen (2006) – with the aim of eradicating the distinctions between sculpture, drawing and performance. Such crossing and erasure of medium specificity is a feature too of the minimalist sculptor Fred Sandback’s dematerialised work, Untitled (1974), which uses ochre coloured yarn to draw lines in space that delineate rather than occupy volume.

An installation by Susan Hiller, Work in Progress (1980), contains the residue of a week-long performance by the artist, which involved unravelling the canvas of a painting into its component parts, each day the resulting threads re-configured as a ‘doodle’ or ‘thread drawing’. Using the soft material of tape, Berlin-based installation artist Monika Grzymala and Seattle-based artist Victoria Haven create new site-specific works for the exhibition: Grzymala’s durational piece creates a densely crosshatched maelstrom blizzard of black, in contrast to Haven’s minimalist and geometrical abstractions; their delicate compositions worked out and painstakingly painted in advance. 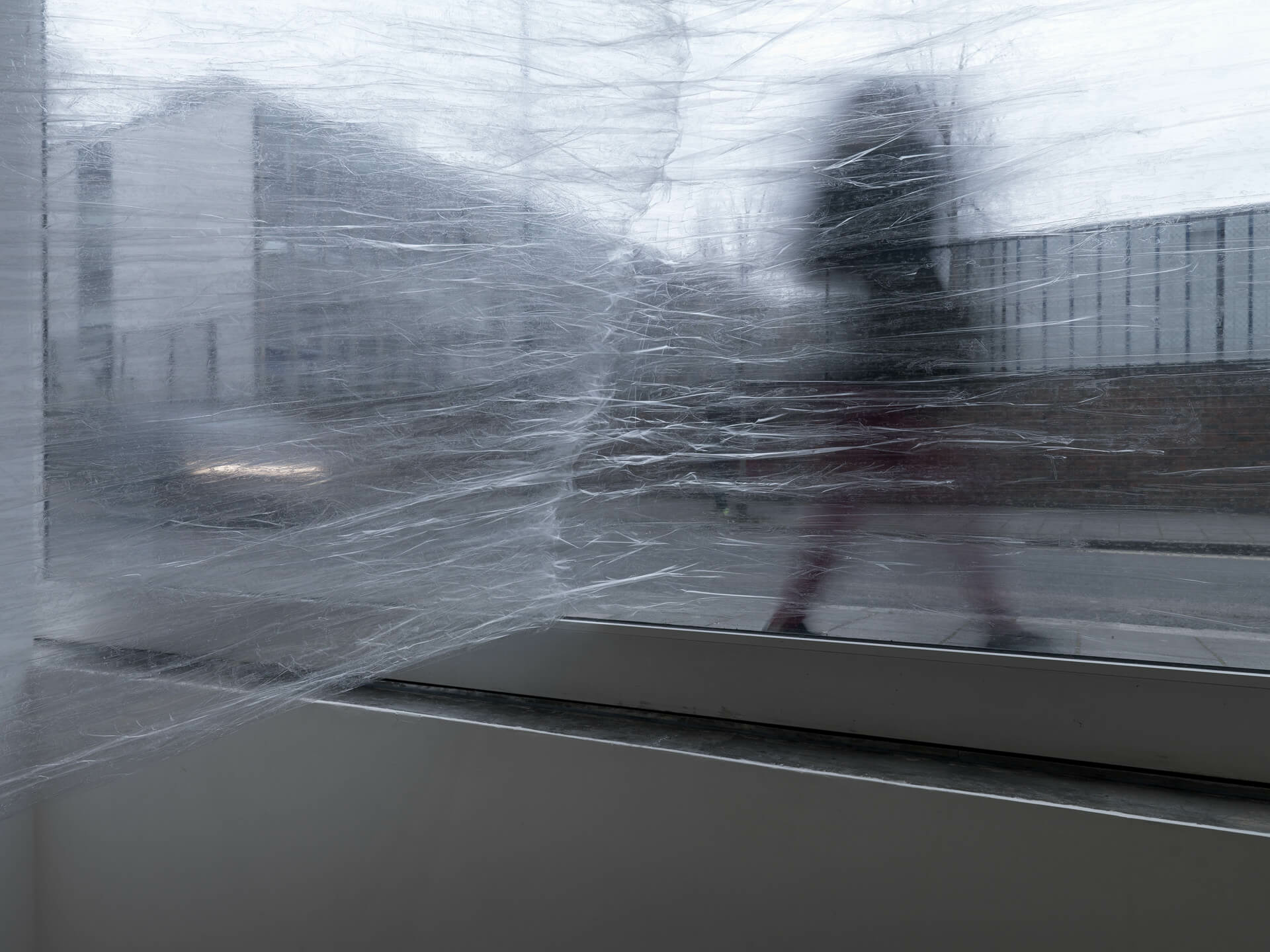 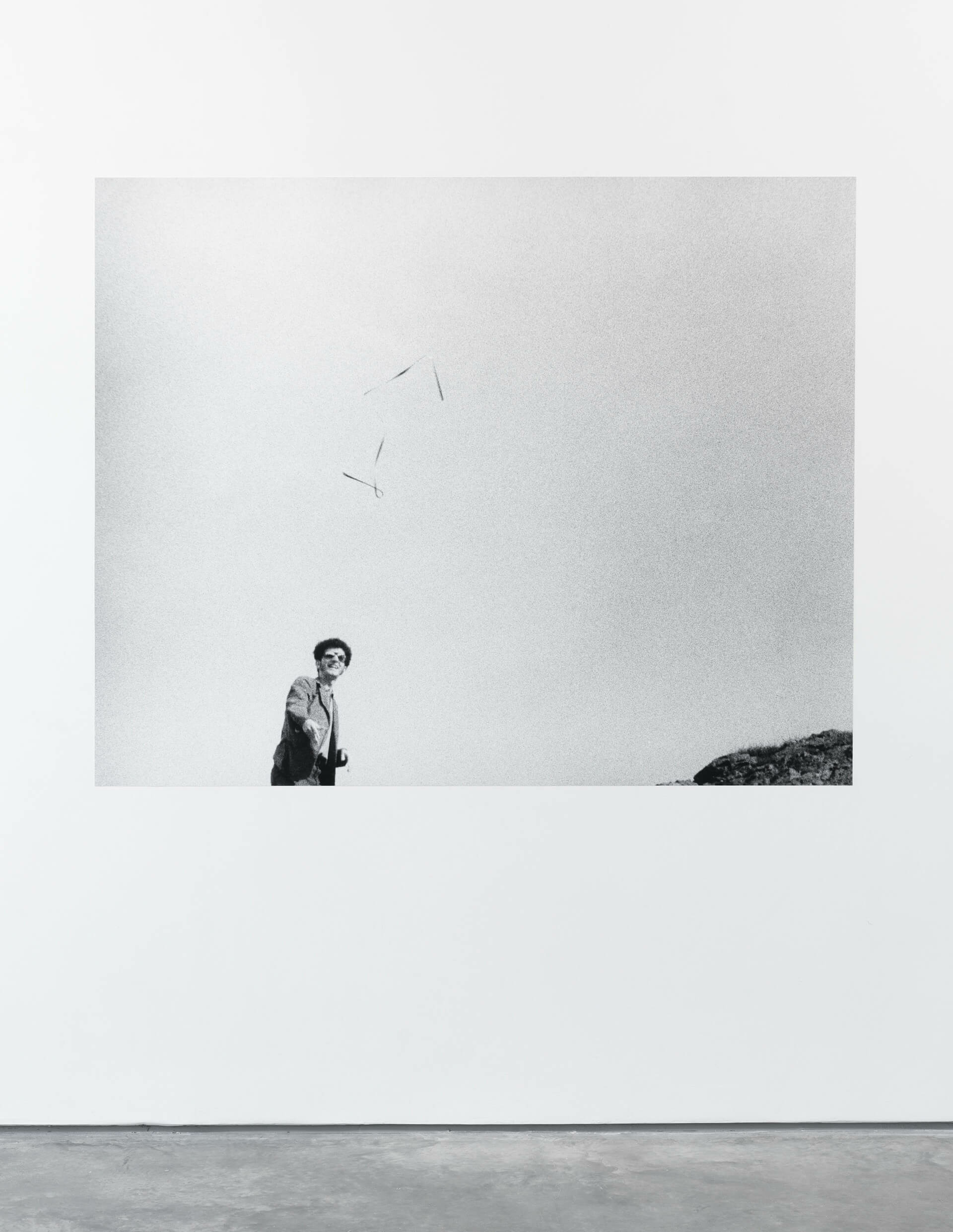 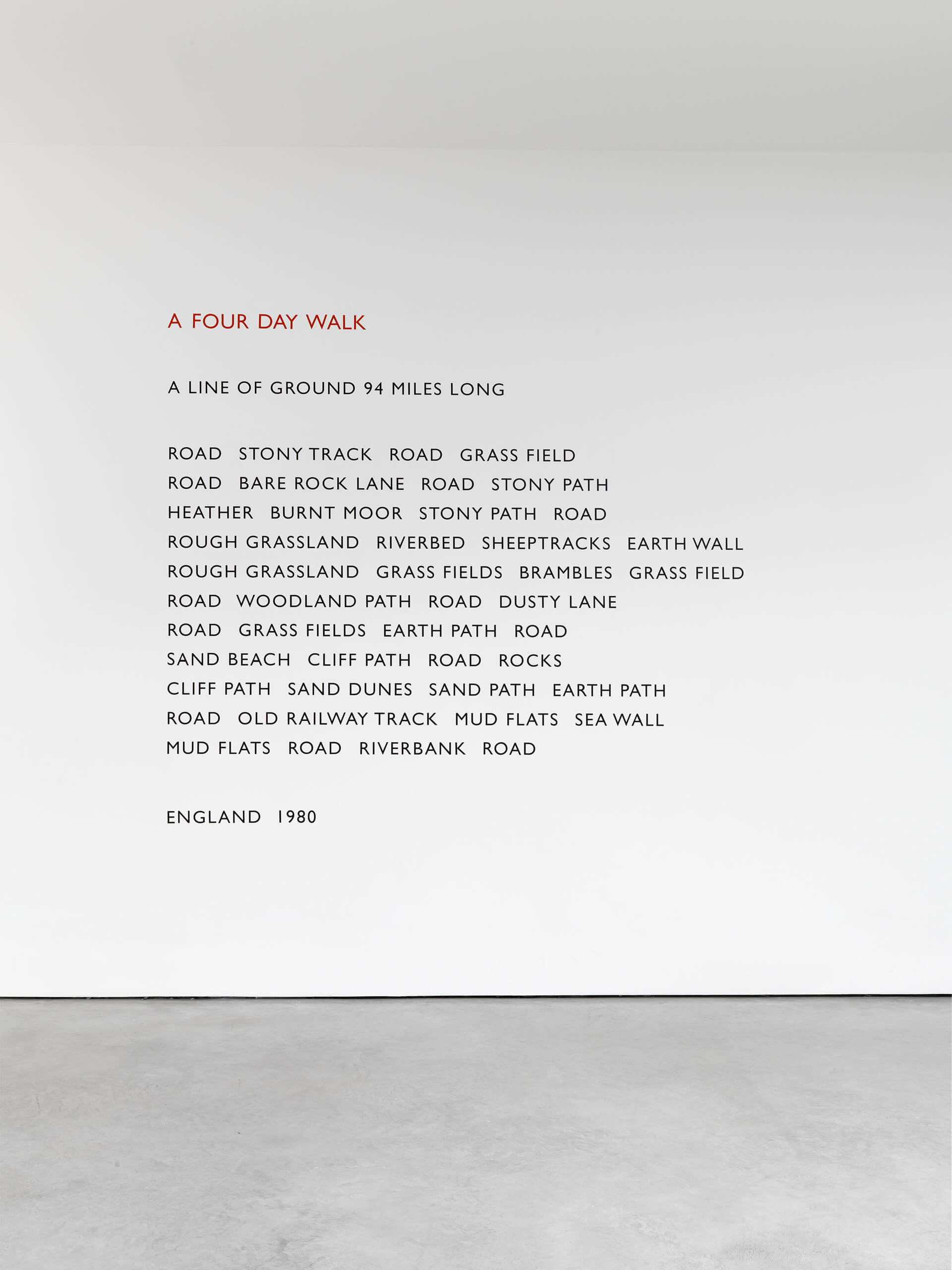 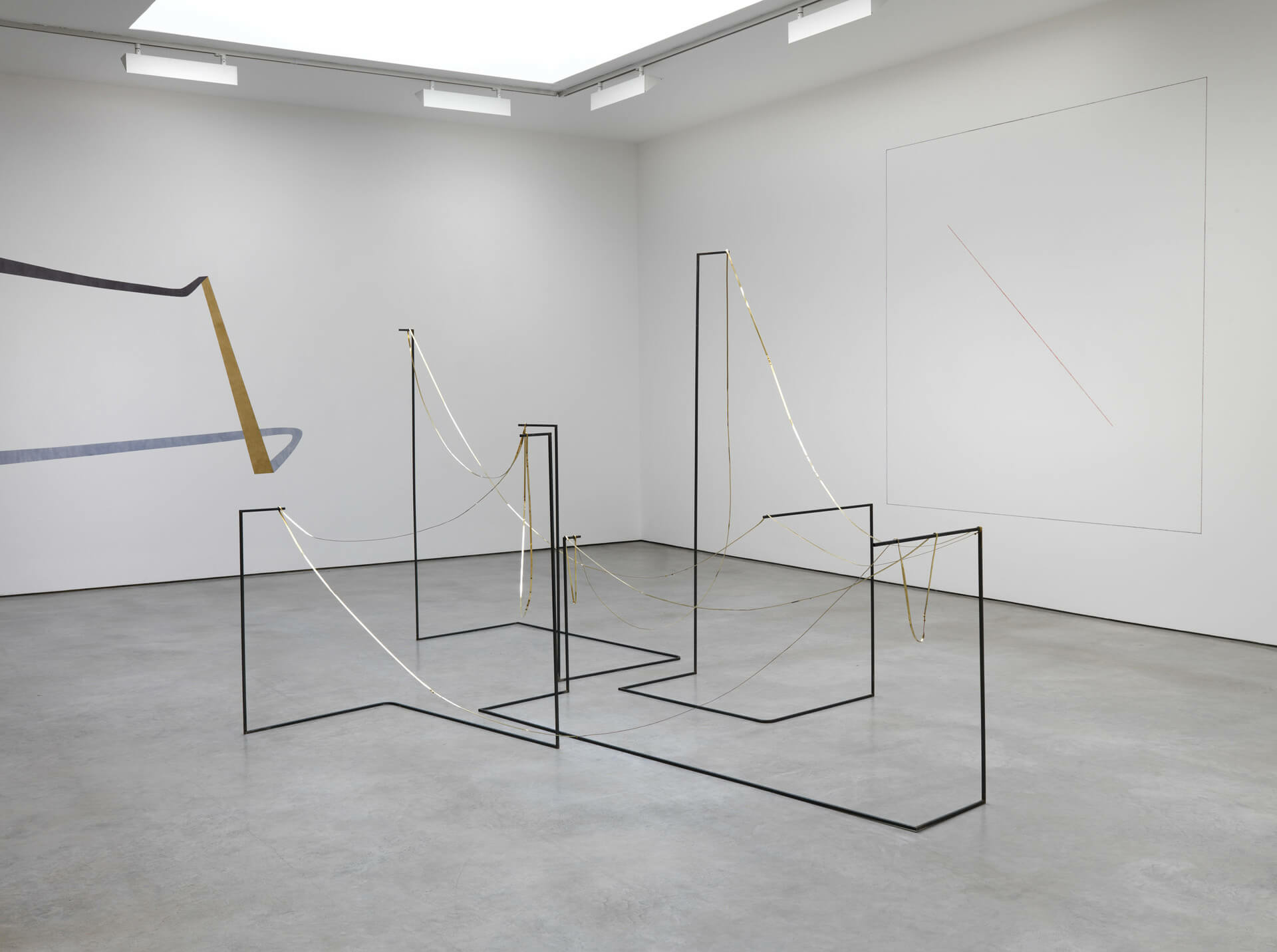 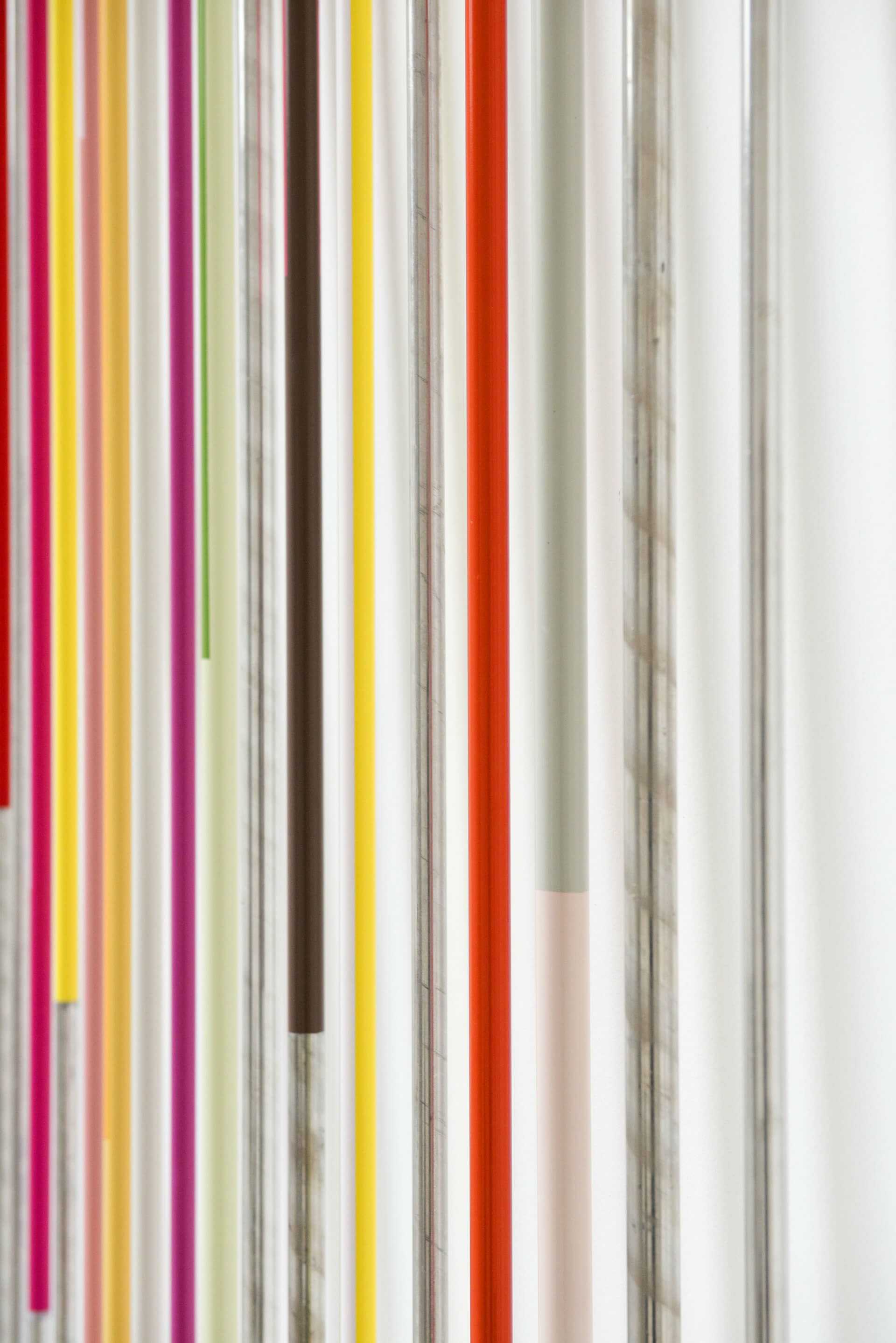 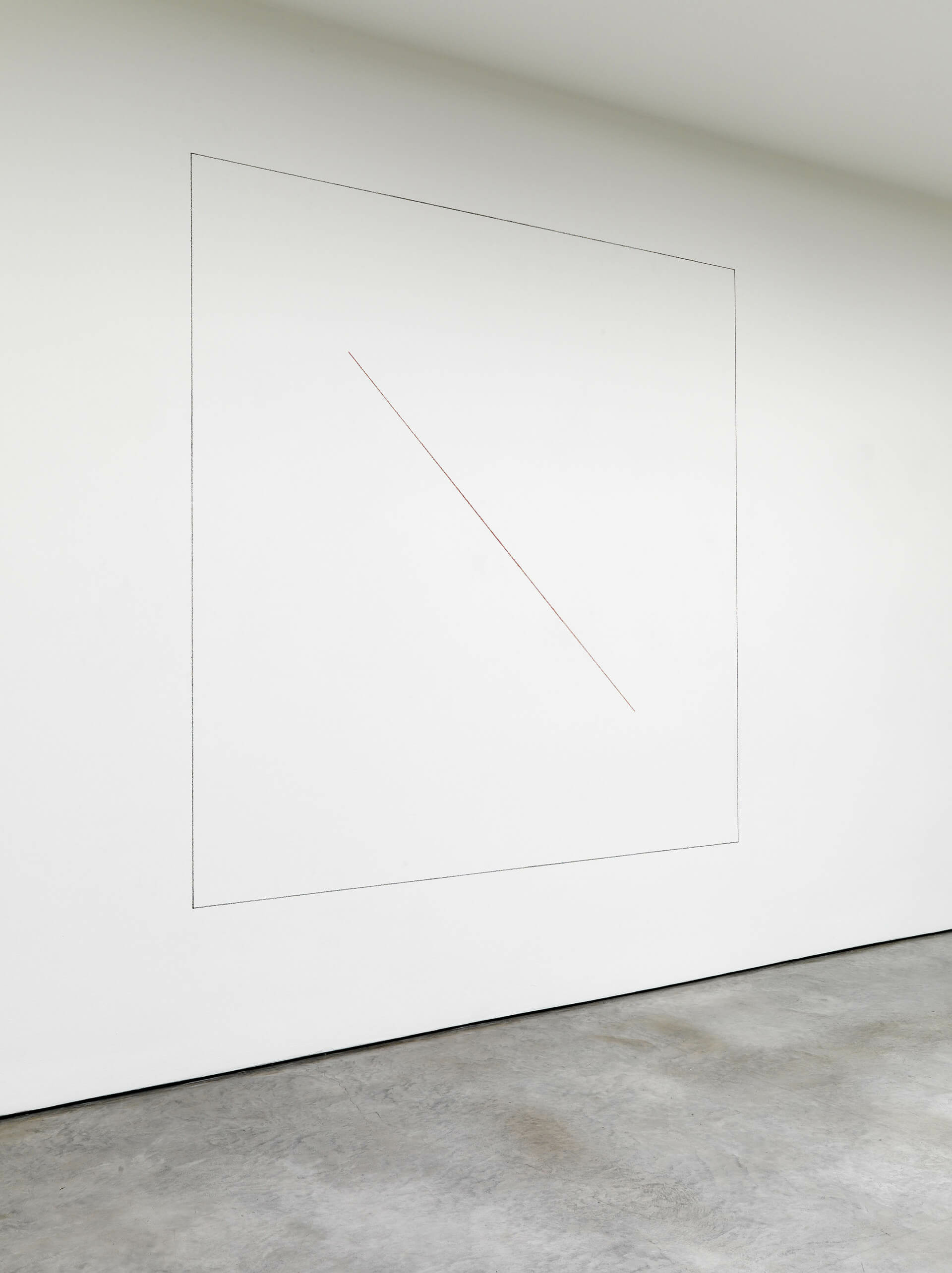 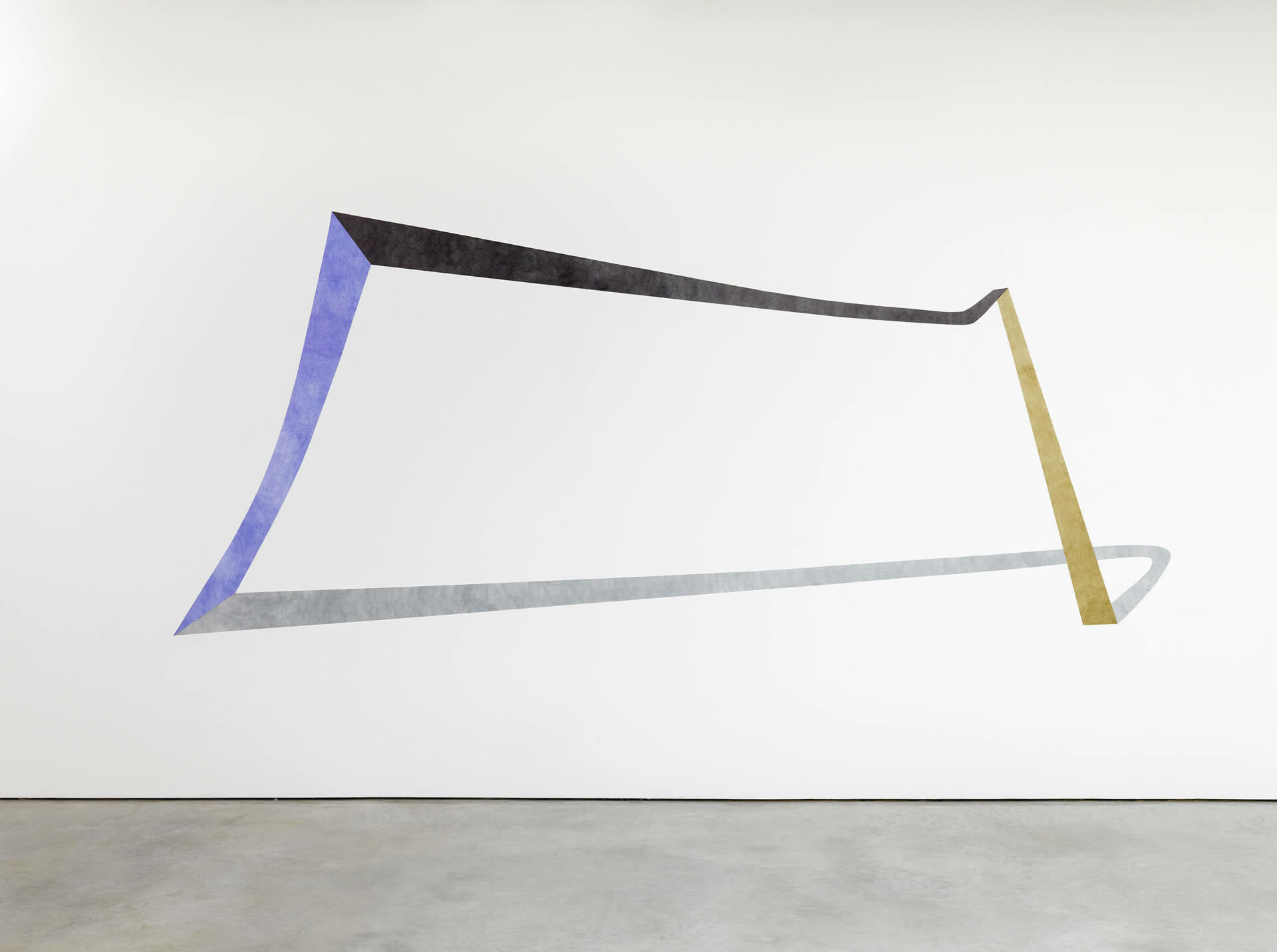 Paint and ink on tape on wall
Dimensions variable 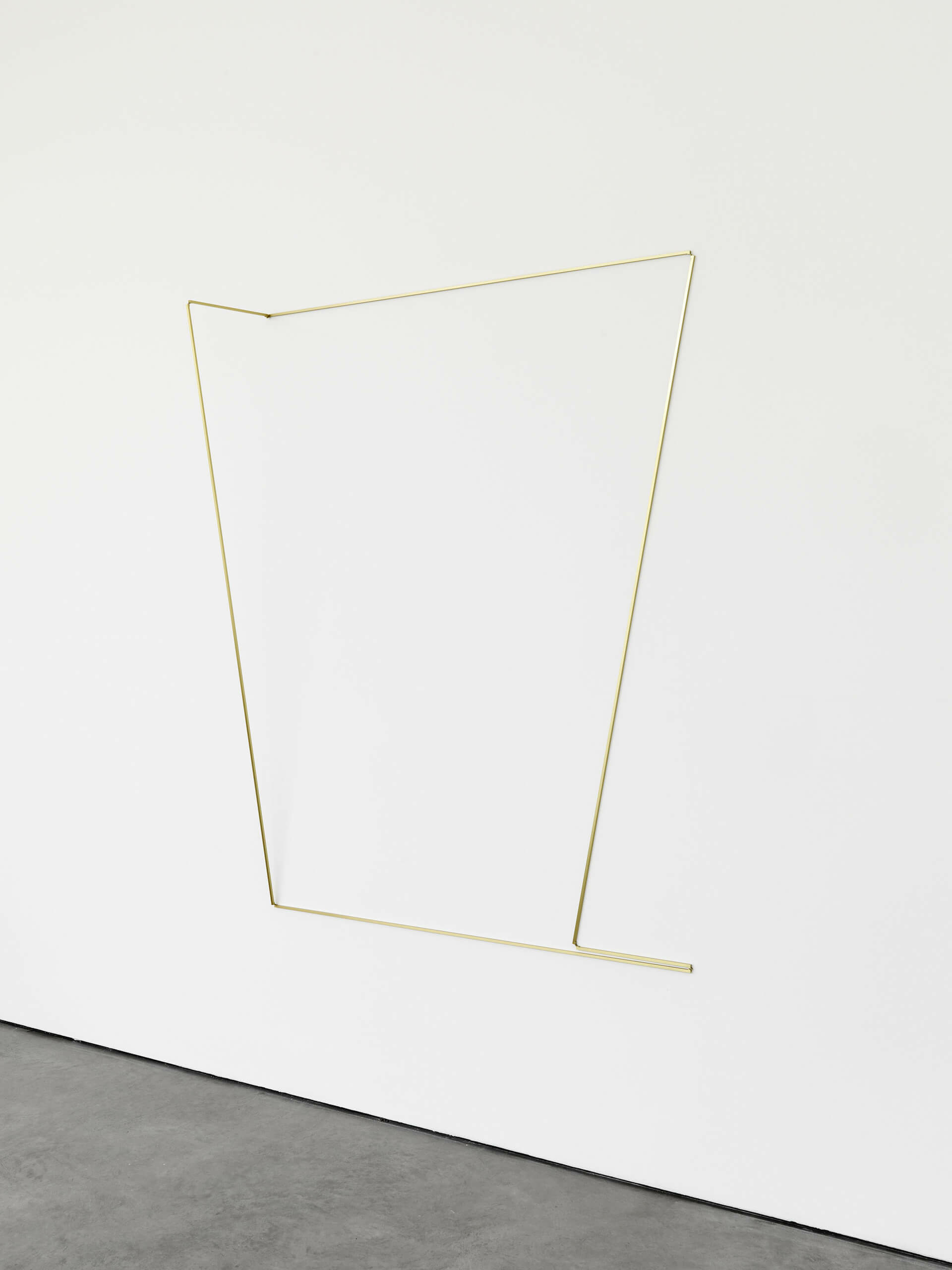 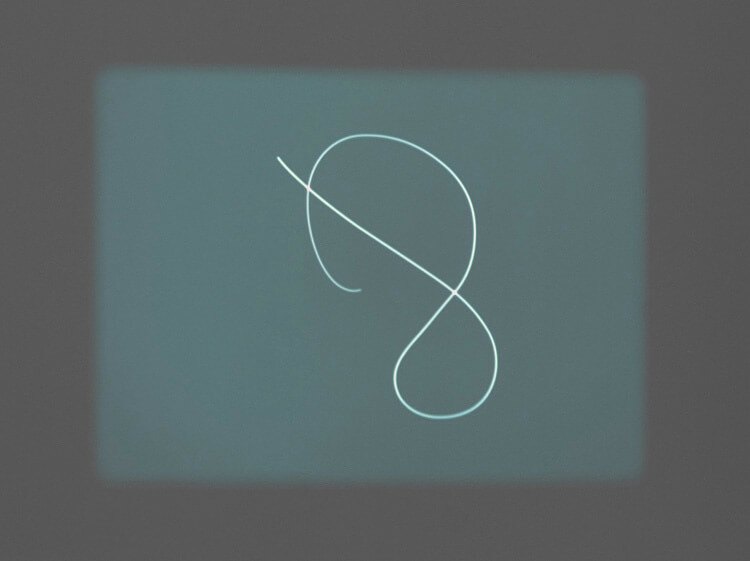 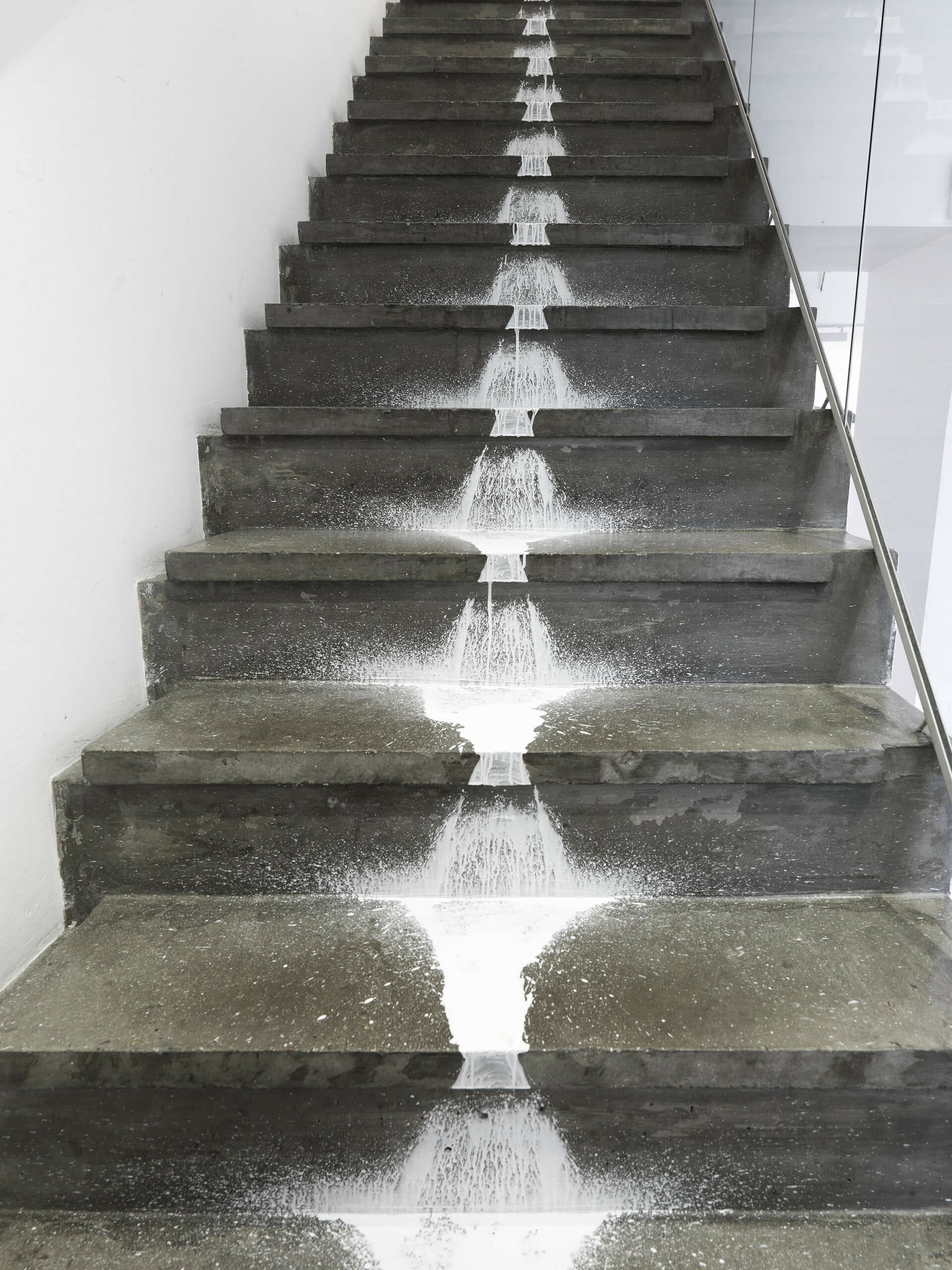 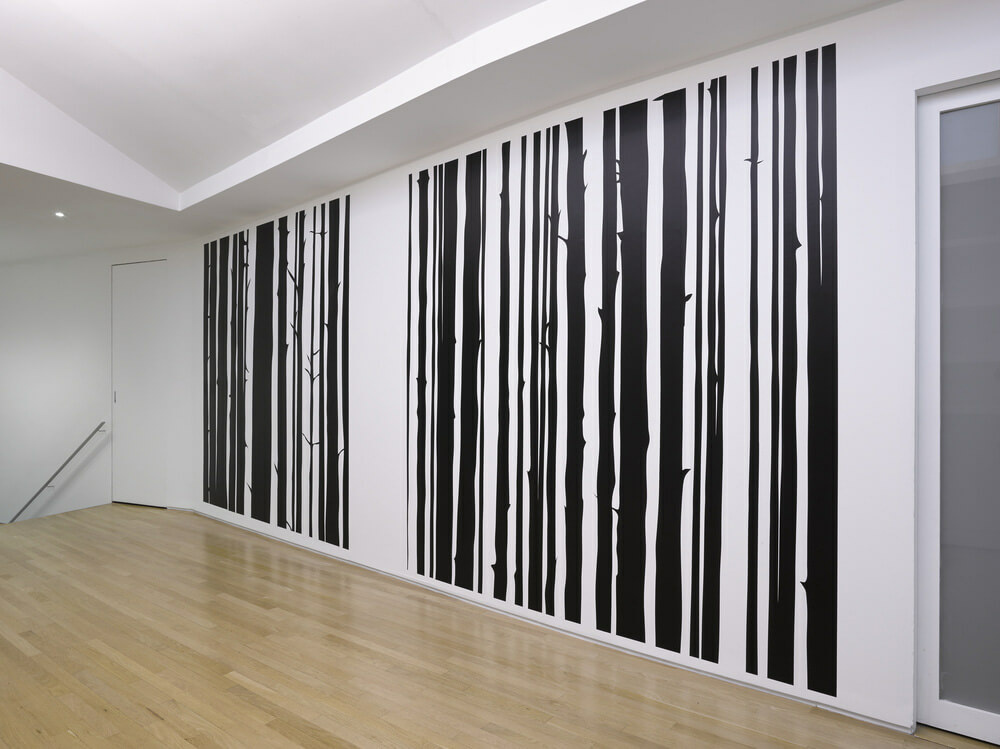 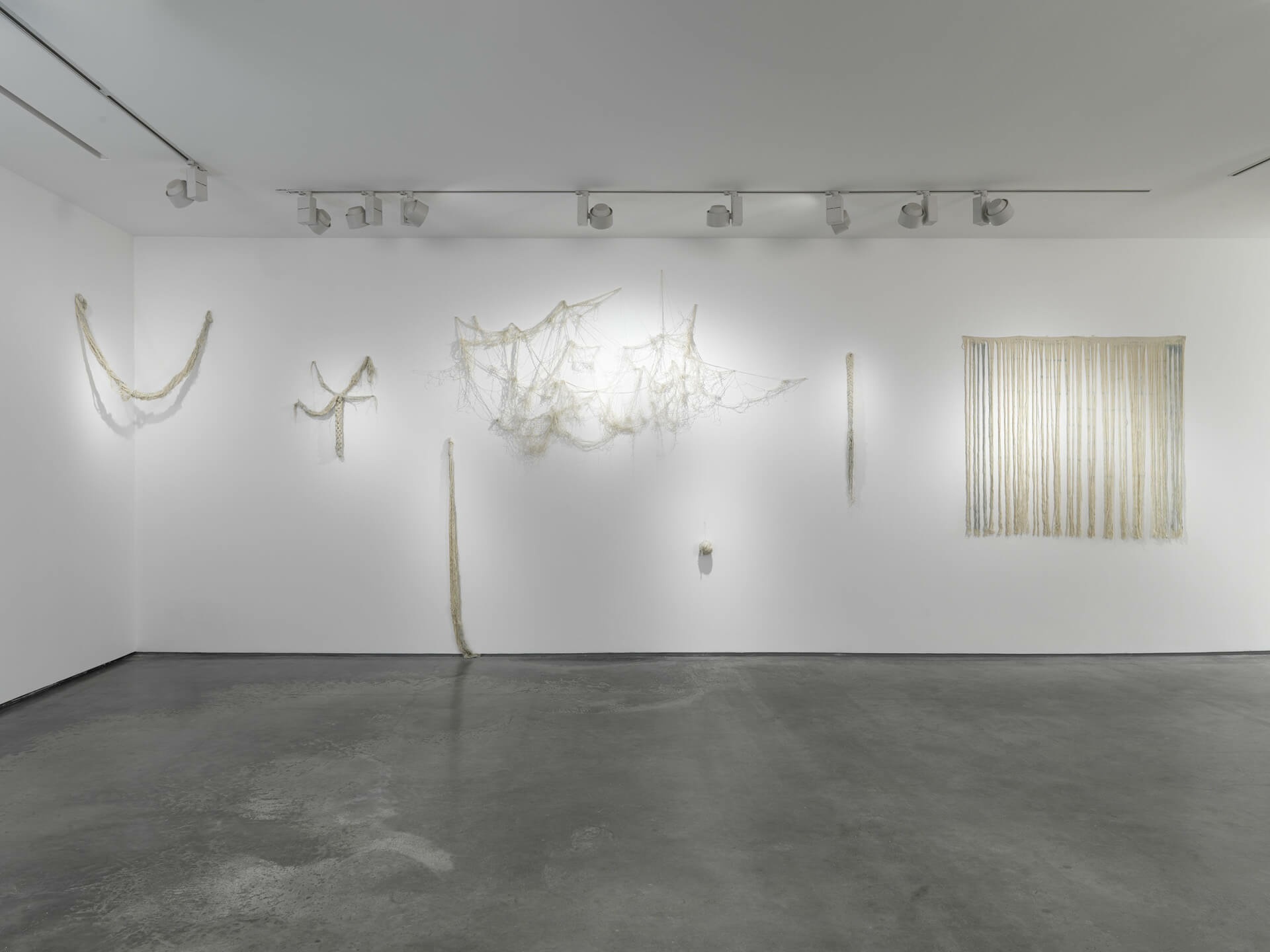 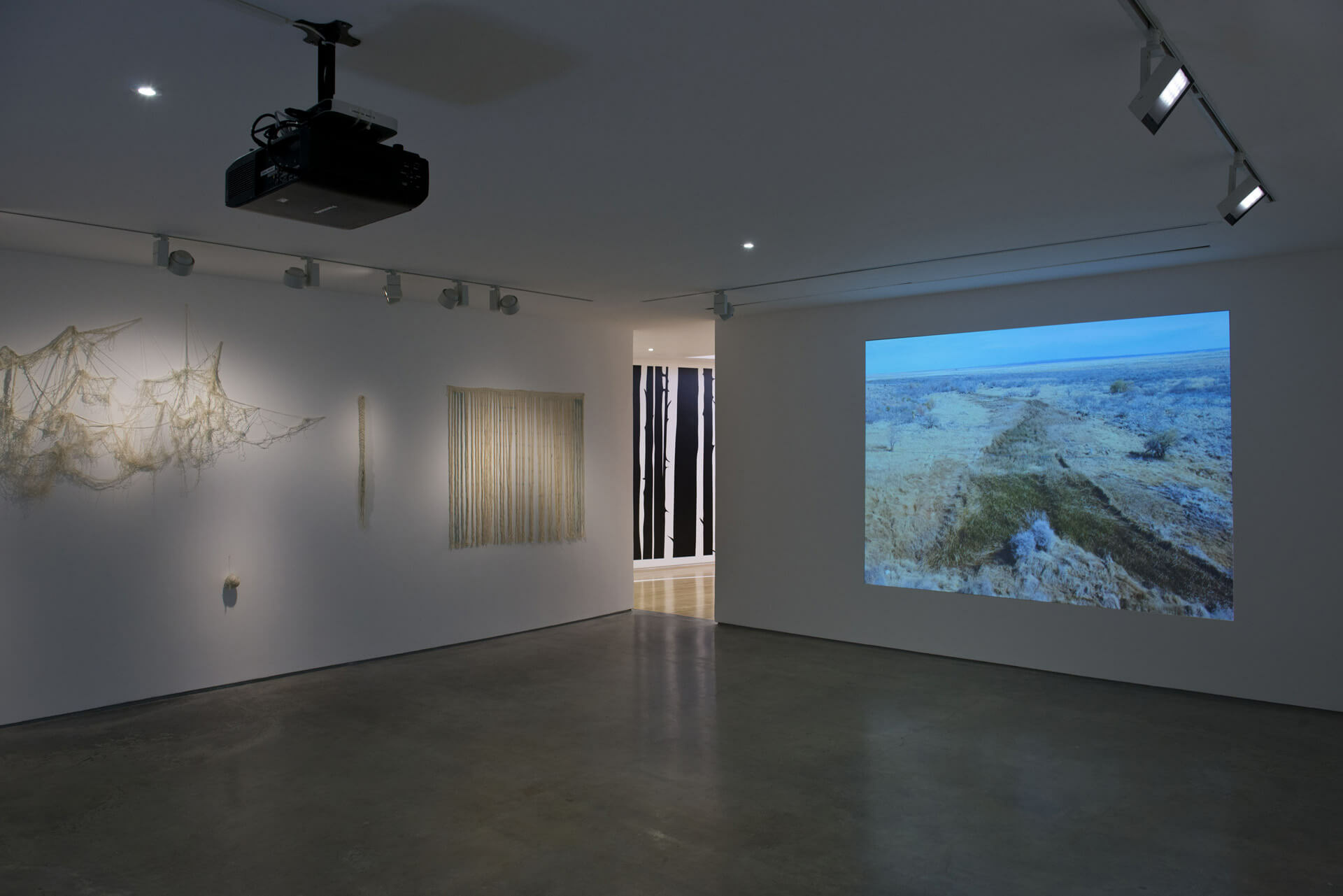